I was first in Bruges just after uni. It was a brief trip, just 3-4 hours, and what I remember best was cleanliness! Not so much as a gum wrapper littered the cobbled streets. Years later, I returned with Ali. Possibly an even shorter visit. So when VisitFlanders invited me to have a closer (and longer) look at Bruges, I was quick to accept. 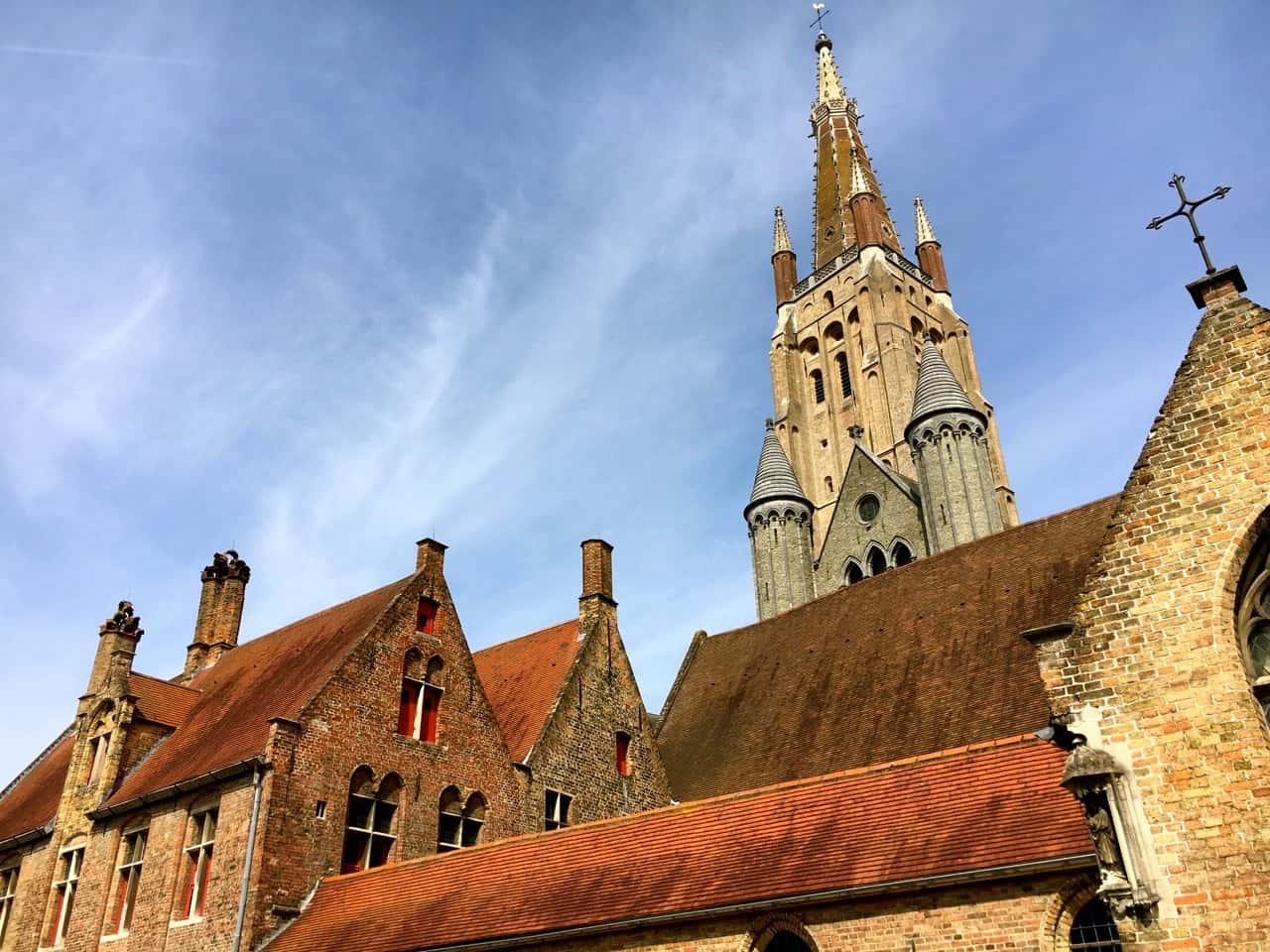 Bruges is known as a fairy tale. You might remember Harry (Ralph Fiennes) so… erm, eloquently, addressing Ray’s (Colin Farrell) lack of enthusiasm for Bruges: (you may want to pop on headphones if little ears are around – the language is a bit on the rough side)

Another major player starring in the movie In Bruges is the town’s tall belfry from 1240. I see no sign of Colin or Ralph, but of course I must climb the belfry. Biking through Bruges, I barely make it to the belfry before closing hours (5pm). The guard is strict, I have to sweet-talk my way in. In fact, I can easily picture her saying (starting at 0:37 in the clip below)

Now, I get in free of charge with my press pass, but I can tell you that €5 will no longer get Kevin (Brendan Gleeson) up that clock tower – much less €4.90. Today, he would have to fork over €10 to enter. (If you’re interested in seeing the movie locations, Visit Bruges has produced a handy map.)

Climbing up the 366 winding stone steps is a good cardio workout, especially if you’ve sampled Belgian treats. And the views… well, see for yourself. 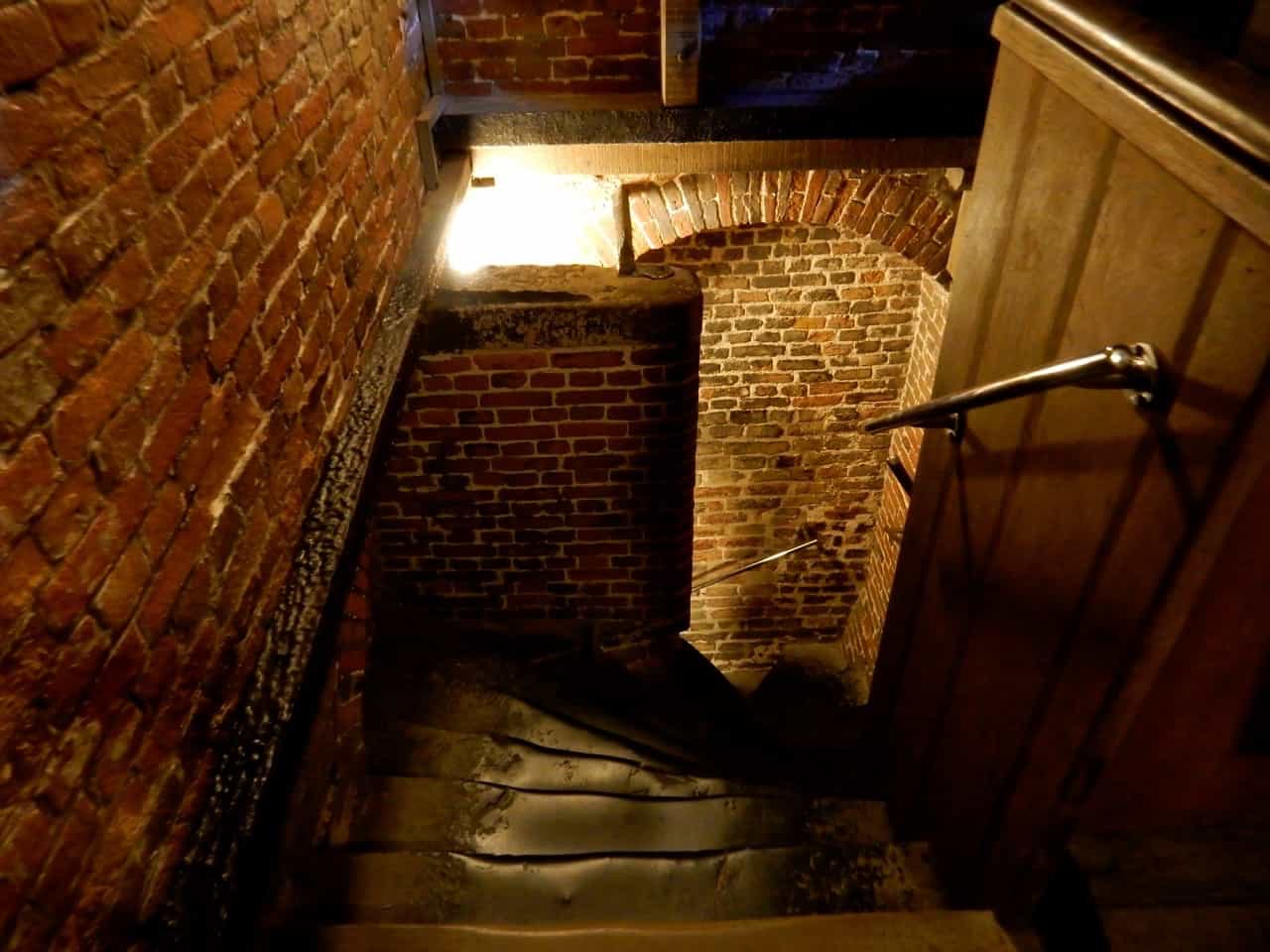 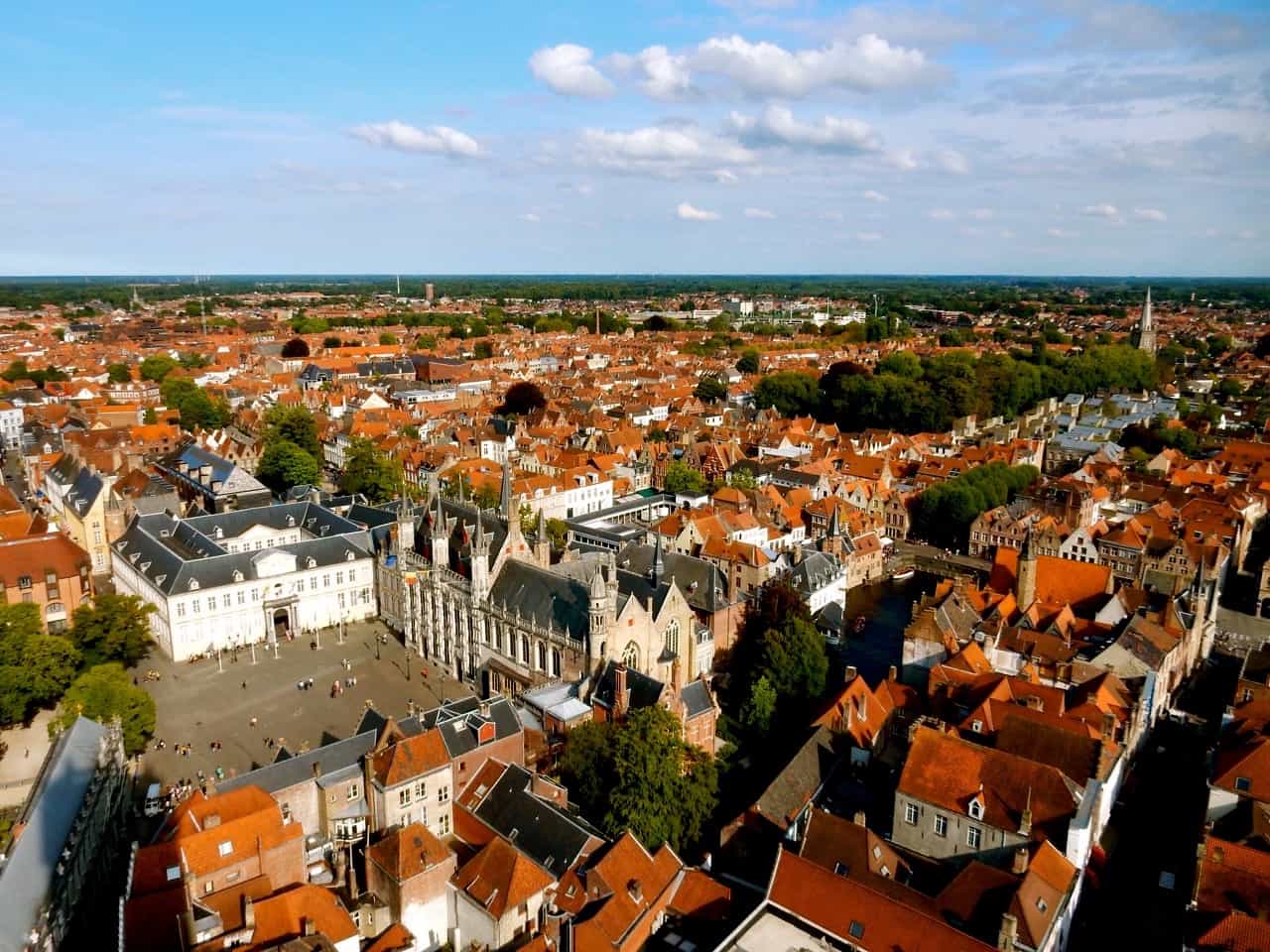 Bruges has been described as a medieval fairy tale, little Amsterdam, medieval New York, Venice of the North… the list goes on. And while I can see the resemblance with Amsterdam, Bruges is medieval in a way Amsterdam just isn’t.

It really is like nowhere else: the narrow houses with tall, pointed gables, the spiked turrets… Gothic! And on the other hand, colourful: ruby reds, pale blues, deep oranges, sunny yellows, soft pinks.

Thanks to the River Zwin, its inlet, the 50 km of canals and being at the crossroads of the Hanseatic League’s trade routes, Bruges was once one of the most important trading ports in the world. Merchants came from all over, trading in gold, amber, cloth, spices and exotic animals. The town was a banking centre as well, with what was probably the world’s first stock exchange opening as early as 1309.

But all good things come to an end, it appears, so also the golden age of Bruges. In the 1500s, the River Zwin began silting and Bruges gradually faded into the shadow of Antwerp.

Today, 120 000 people live in Bruges. An additional 7 million tourists stop by every year. This being August, I had expected throngs of them. Not so. There’s plenty of space as I cycle through the old, cobbled town centre. The language I hear most frequently is Flemish. Locals.

Bruges’ concert hall warrants a special mention. Not only is it venue for music and contemporary dance, there’s also art exhibitions, literary discussions, architectural evenings, lectures on peripheral thinking, and much more.

The building was opened on 20.02.2002, at 20.02 (clever marketing there), and has artists in residence. The roof top terrace has fantastic views and bells to play with. 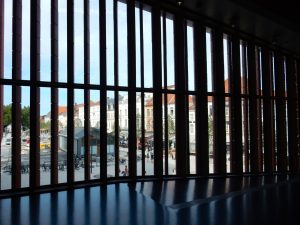 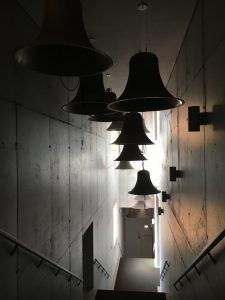 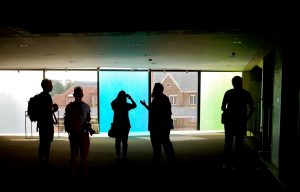 One of my fave spots in Bruges is Minnewaterpark with Love Lake and Lovers’ Bridge. As in any self-respecting medieval city, legends abound in Bruges. Here’s one:

A young and pretty girl called Minna loved the warrior Stromberg. He, sadly, was from the neighbour tribe, so no go on marriage, said Minna’s father. Instead he chose a suitable husband for her. Heartbroken, Minna, poor thing, ran away. When Stromberg finally found her, she died in his arms, exhausted. Hence Minnewater.

(What is it with young love and authoritarian fathers?) 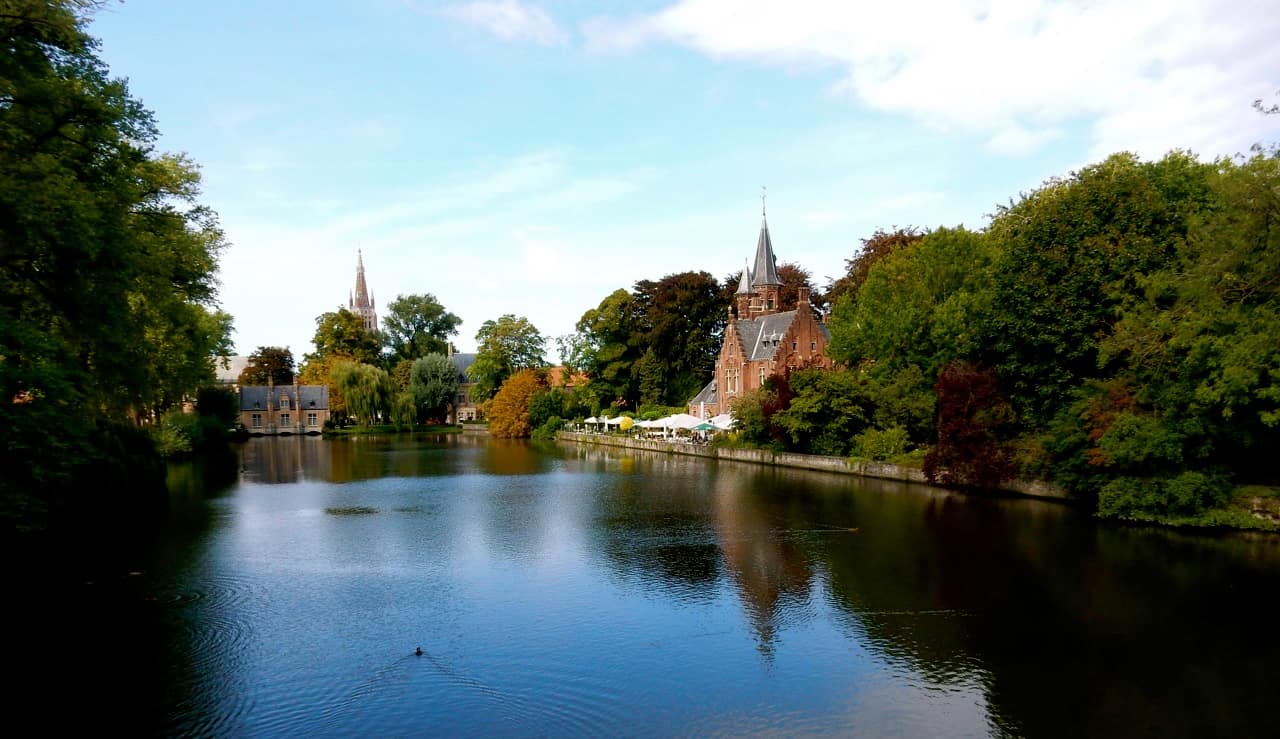 And you? If you cross Lover’s Bridge with the mate of your dreams, you are assured eeuwige liefde, as they say here. Eternal love. Romantic, indeed.

Minnewaterpark is also home to the famous white swans of Bruges (remember Harry’s words in the clip above? How can f***ing swans not f***ing be somebody’s f***ing thing, eh, how can that be? Not quite the same romantic ring to it, that.

Brussels Airlines’ Hi Belgium Pass costs €149 and includes flights to Brussels from most European capitals and major cities, as well as unlimited train journeys and activity vouchers in two cities.

As Bruges is only 1 ½ hour by train from Brussels, it tends to be a day trip destination. Do try to spend at least 24 hours, the atmosphere changes after 5pm. 48 hours is even better.

I opted to spend a day at the evocative Flanders Fields, thus cutting short my time in Bruges.

Next time, I’ll rent a bike again. Cycling in Bruges was a particular pleasure. I’ll also take a boat through the many canals, and visit a few of the quirky museums, such as Choco Story (all about chocolate, natch) or the Frietmuseum (about chips, or French Fries, as you Yank readers say – though beware: here people will by rights insist you begin calling it Belgian Fries).

Flemish food is excellent, as is the beer and the chocolate, as you will know. Also, there’s chocolate beer. Or possibly beer chocolate. I’ll have Belgian fries for lunch, gaufres (waffles) with fresh fruit and berries for dessert, and then walk and cycle it all off. 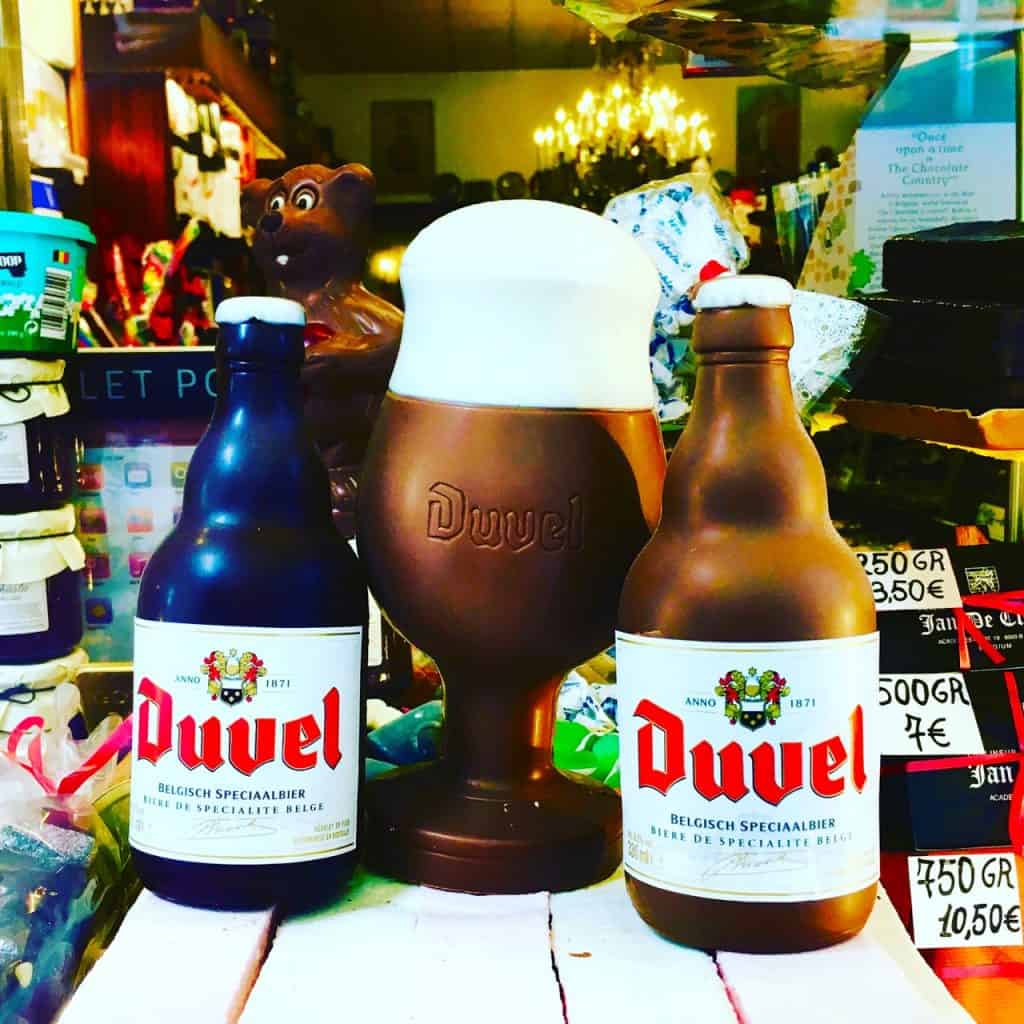 The Historic Centre of Bruges is a UNESCO World Heritage site. Here are more heritage sites around the world.

Disclosure: I was in Bruges as part of a collaborative project between Nordic TB, Visit Flanders and Brussels Airlines. All words and opinions are mine and mine only, as ever. Otherwise, this would be meaningless.