Are you a bit of an amateur archaeologist? Or interested in world heritage? Or do you enjoy spending time wandering in meadows and along a rolling river whilst breathing fresh country air? Perhaps all three? Then a day (or even half-day) trip to Kernavė will be a 3-in-one whammy for you.

Kernavė is about 35 km from Vilnius, and easily reached by car (ca 30 min), or by marshrutka (about one hour). 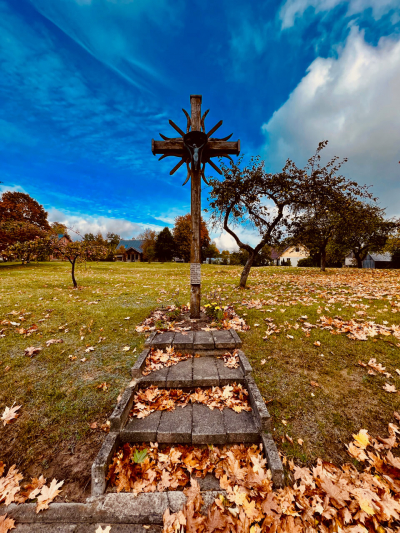 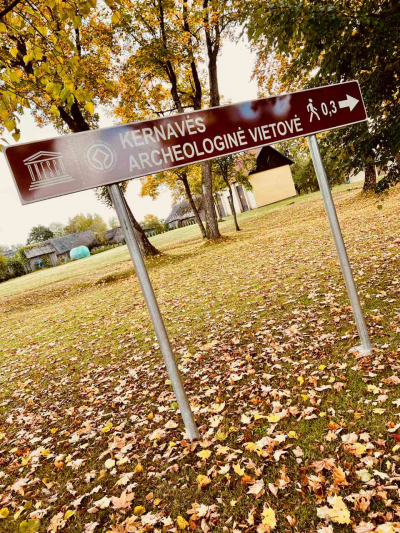 Getting off the marshrutka, you’re met with a cross – and a sign. 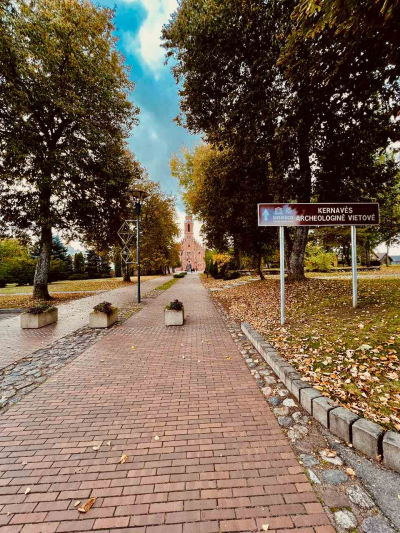 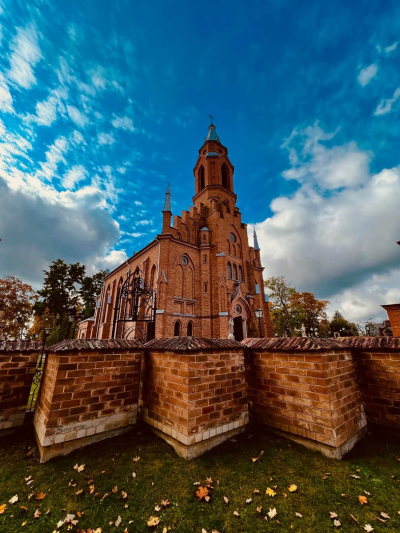 Along the 300-metre-long avenue, you pass the on-site museum on the left, and the church straight ahead. Further along: to the left, you’ll find several info boards, explaining the different periods of Kernavė’s history. Next to the boards is a dismantled turnstile. Walk on through.

Now, on the left is a small grave yard and a 19th century stone chapel/mausoleum with an altar inside. 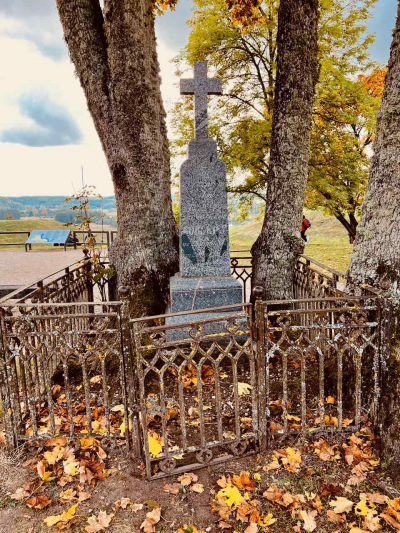 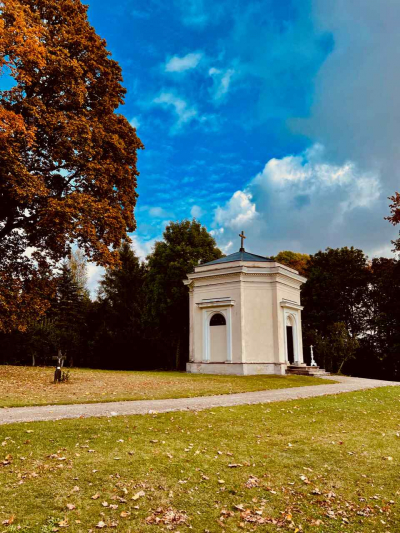 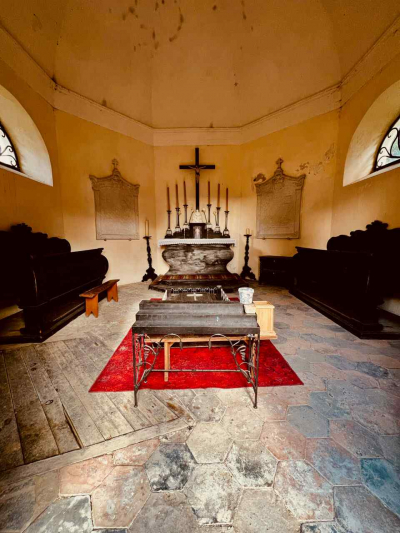 And on the right is an 18th century log chapel. 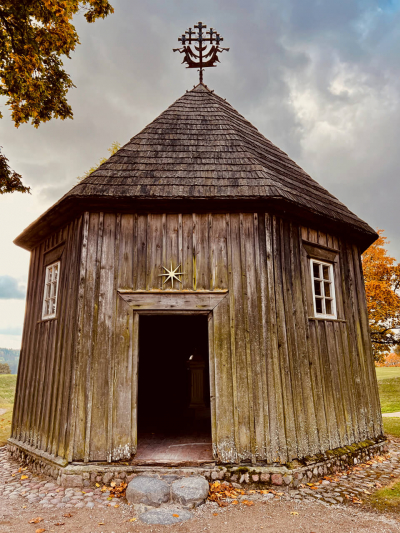 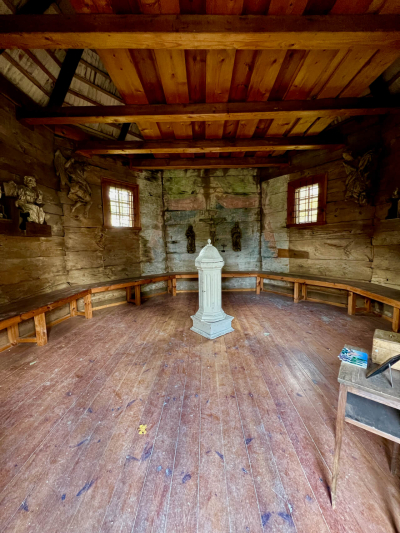 And then you’re at the main attraction:

We are in a valley. Between me and the bend of the River Neris are five hills. They remind me of the Viking Era burial mounds that we have so many of in Norway. Only these are quite a bit larger.

Let’s travel back in time, to the 8th millennium BCE. That’s when Stone Age settlers showed up on at Kernavė, setting up temporary camps to hunt and fish. We won’t stay long, in fact, we’ll fast forward 6,000 years or so, when that nomad lifestyle gets some serious competition. Let’s settle down, someone said, and so they did.

Sadly, not much is left of the settlements. Mostly, it’s the five mounds. Imagination is needed.

There are some traces of humanity, though. Remains of late Bronze Age burial grounds (about 3,000 years old) have been found down by the river. The dead were cremated, then buried in small simple pits, in a larger pit amongst a pile of stones, or in ceramic urns.

In Roman times, the settlements expanded, and a fort was built on the central mound here as well. A town evolved. Mentioned in writings already in 1279, Kernavė town was strategically located by the river. First a feudal town, run by a duke – with craftsmen and traders and village people. As the town grew, the nobility and the rich moved further up from the river. And so we have the first capital of the country, a symbol of statehood and pagan independence. (In 1387, Lithuania was the last country in Europe to surrender to the forces of Christendom.) Grand Duke Vytautas of Lithuania stayed in Kernavė for long periods at a time.

Lithuania is awash with hill forts; there are ca. 1,000 scattered around the country. During medieval times, all the hills here were fortified, too. Again, not many traces of those forts can be seen. They will have naturally decayed over the centuries. And again, imagination comes in handy. The best way is to climb one or all of the five mounds.

There are long stairs to the top of each one, so you’ll get your steps – and steps – in. From the top, you’ll have gorgeous views over the River Neris and the meadows leading down to it.

As I stand on top of the biggest mound, looking out over the valley and the river below, I can see why they built forts just here. It’s certainly gorgeous, but also a good place to keep an eye on possible enemies coming your way. 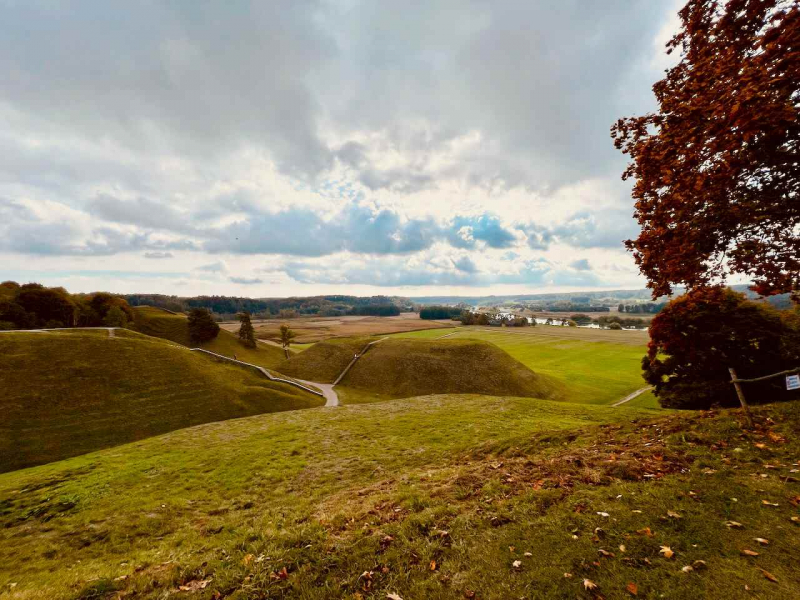 Most of the people lived down by the river, and the nobility lived up in the fort. I can’t help but think the fort must have been relatively small. It is not that much room on top here. And dragging water and supplies up the hillside – without the stairs – can’t have been easy.

Standing here, I can also imagine it must have been a bit lonely up on the top here, watching the hustle and bustle of the village down by the river below. Did the nobles pop down to town now and then, having a good time at the watering hole?

So what happened to the town of Kernavė? Well, we have mentioned the Teutonic Knights several times here on Sophie’s World, and sure enough, they also wreaked havoc here. In 1390, during the Lithuanian Civil War, they burnt down the town and all the buildings in the valley. Instead of rebuilding the town, the few remaining inhabitants moved up the hill.

Walking back to the marshrutka stop, I pay a visit to the on-site museum at Kernavė, to get a better idea of how it might have looked in the past. I pay the 4 Euros, get an audio-guide and am directed down in the basement, where I’m met with a large dark hall. Dark, to get better effect of the audiovisuals. 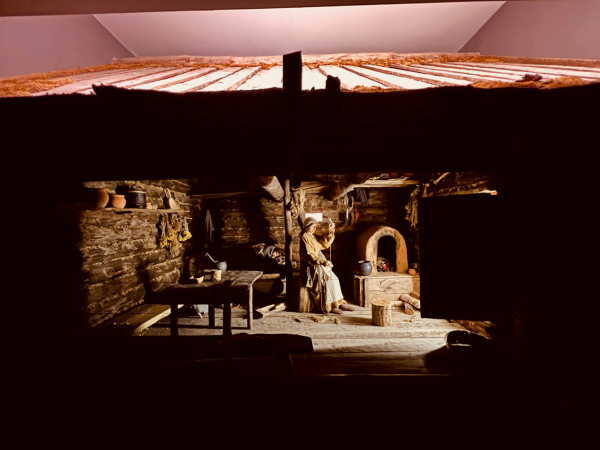 The exhibits and info videos start off in prehistoric times, then goes through the Stone Age, Early Metal Age, Iron Age, Roman era, and onwards to the 13th – 14th centuries, when Kernavė was a thriving town. The 40+ years of archaeological work here is also shown. 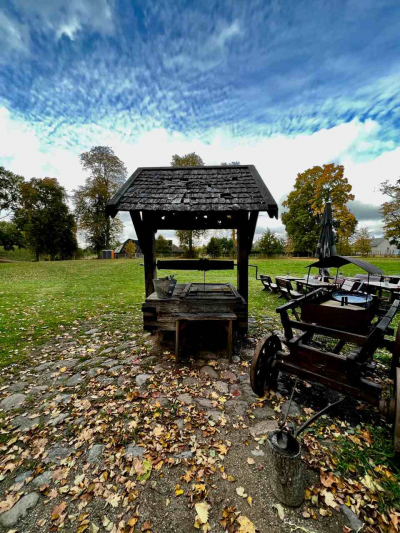 In the open-air museum, you’ll find a reconstructed little village with wooden cabins, showing life by the River Neris in medieval times. The reconstruction was done using only an axe, so as to be faithful to the technology of the time. 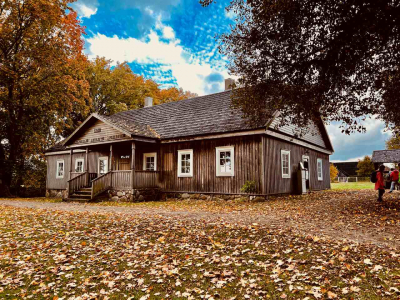 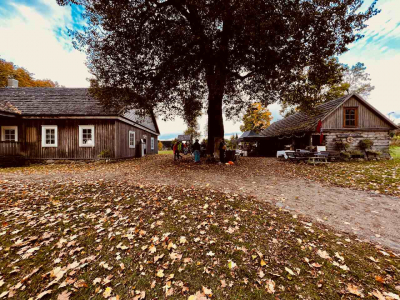 Kernavė on an autumn day: five hills, a river, a valley and this bunch.