Khiva: where water is sweet? 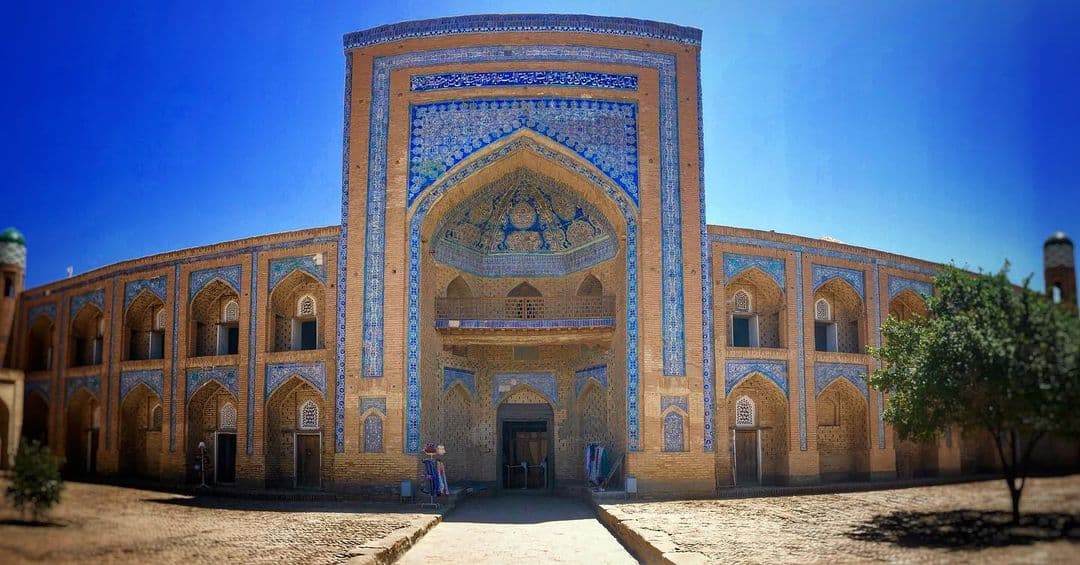 In the last post, I told you about our journey to see the environmental tragedy that is the disappearing Aral Sea. Time to move on. We leave Muynak and the autonomous Republic of Karakalpakstan and head south into the Khorezm region and its capital, Khiva.

Driving along the Turkmen border much of the way. 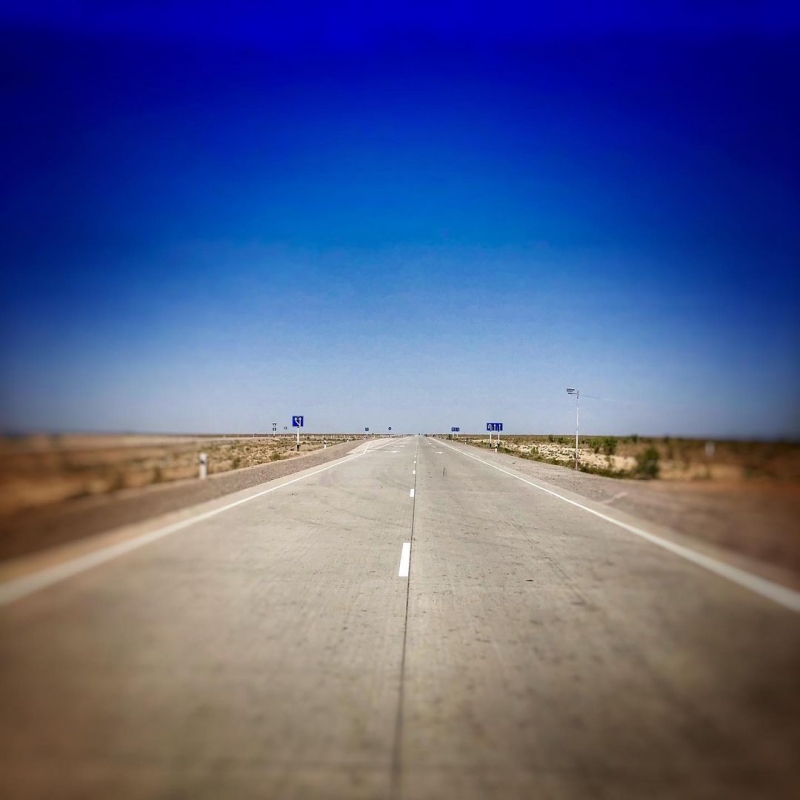 The road seems eternal, and the temperature is scorchio. (Yes, that is an official measurement). Will it hit 50° C? We shall see.

About 6 hours later we drive into Khiva, centre of Khorezm since the 4th century, then a famous Persian kingdom known for its water management technology, just like Augsburg. We are south of the Amu Darya River (one of the two that fed into the Aral Sea before it was derailed).

When I was a teen, I read The Road to Oxiana, Robert Byron’s delightful travel memoir from the 1930s. He talks about the Oxus River, on the border between the Soviet Union and Afghanistan. I am childishly pleased when I discover this is the same as the Amu Darya.

Khiva was founded about 2,500 years ago, and quickly became a caravan stop for merchants along the Silk Road. The final oasis before the Persian desert. Present-day Khiva is home to 90,000 residents. The historically (and atmospherically) interesting part, however, is Itchan Kala, the medieval old city.

Arriving in Khiva, we check in to our lodgings, a pleasant hotel with an excellent location inside Itchan Kala.

Then, money. We have recently come across the border from Turkmenistan and we do not have a whole lot of Som.  Just inside the Western Gate here is an exchange office. And soon we have heaps of Som. Heaps! 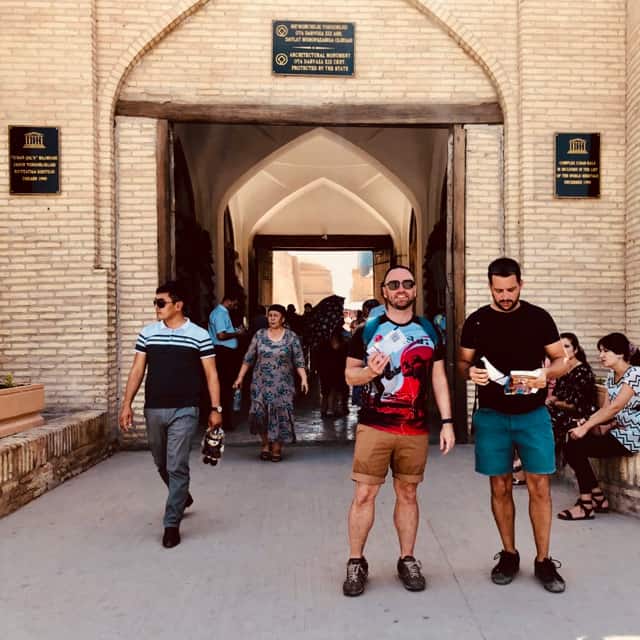 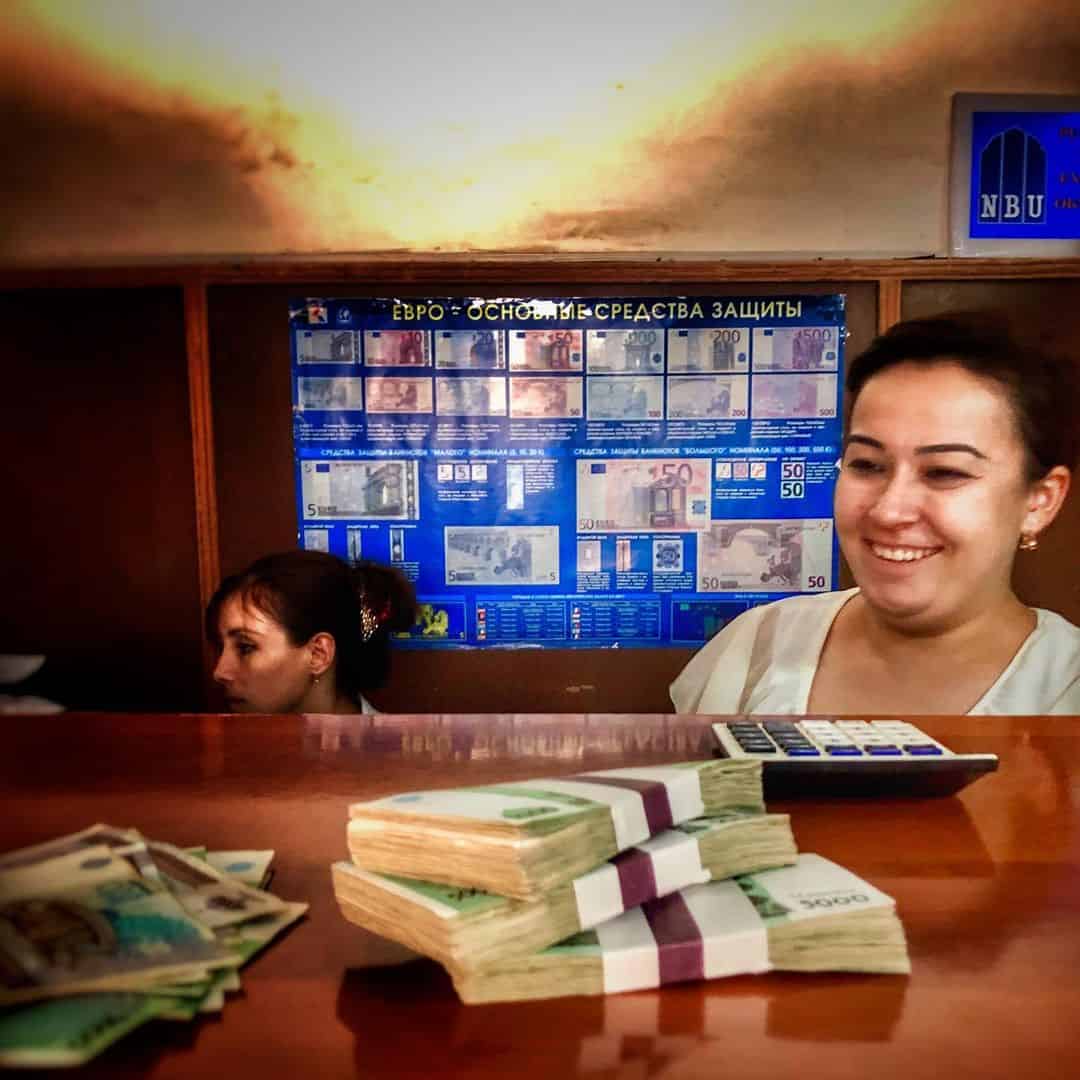 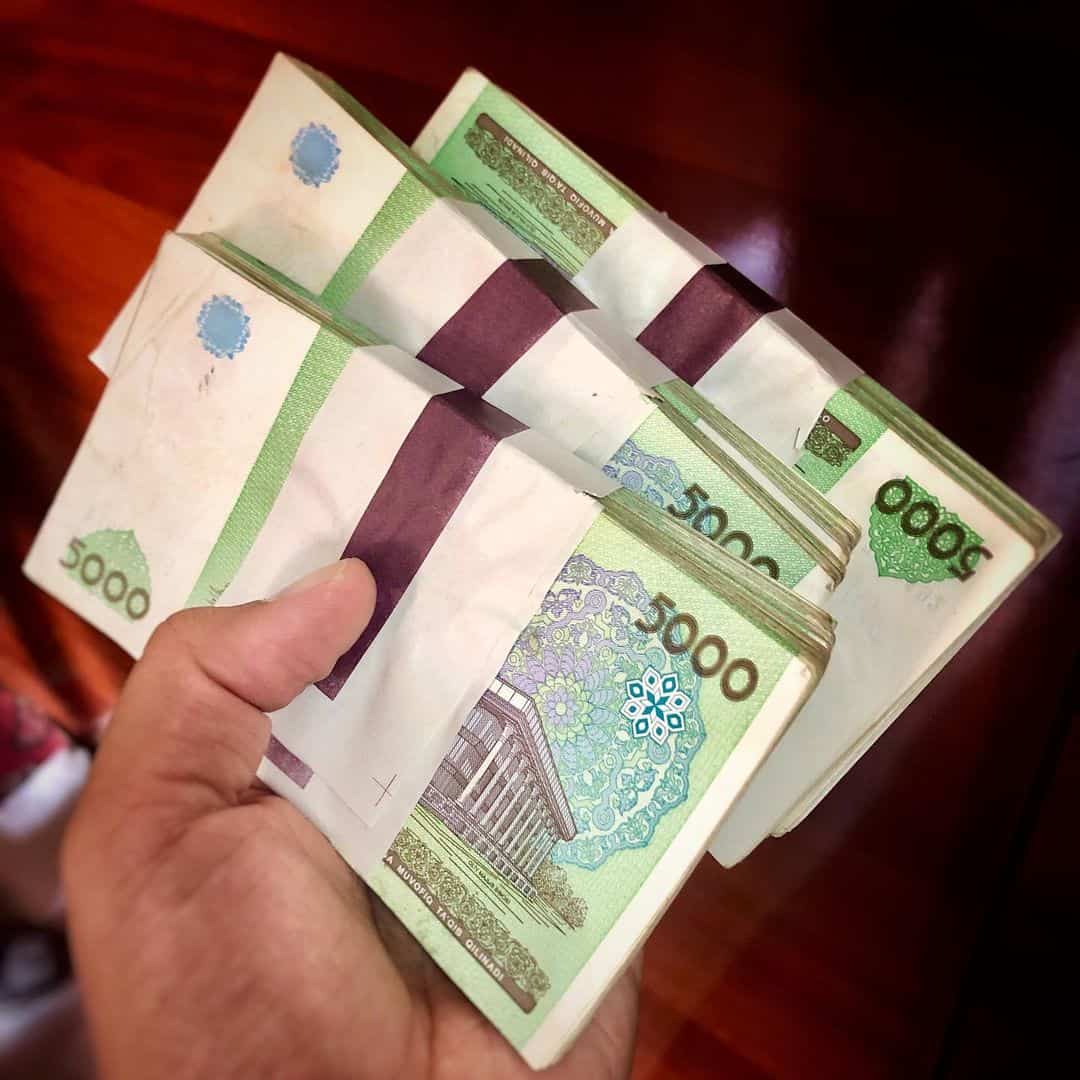 We are millionaires! (Let’s forget for a minute that 1 million Som is 79 Euro)

At first, wandering around Khiva’s old town feels a bit like being in an outdoor museum. Along the cobbled streets and alleyways are 250 ancient houses, most of them enclosed with courtyards – and 51 monuments: towers, madrassahs, mausoleums. Most of the buildings still standing, are from the early 19th century. Some are quite unique, like the Djuma Mosque. Others are just beautiful, like Allah Kuli Khan’s palaces. 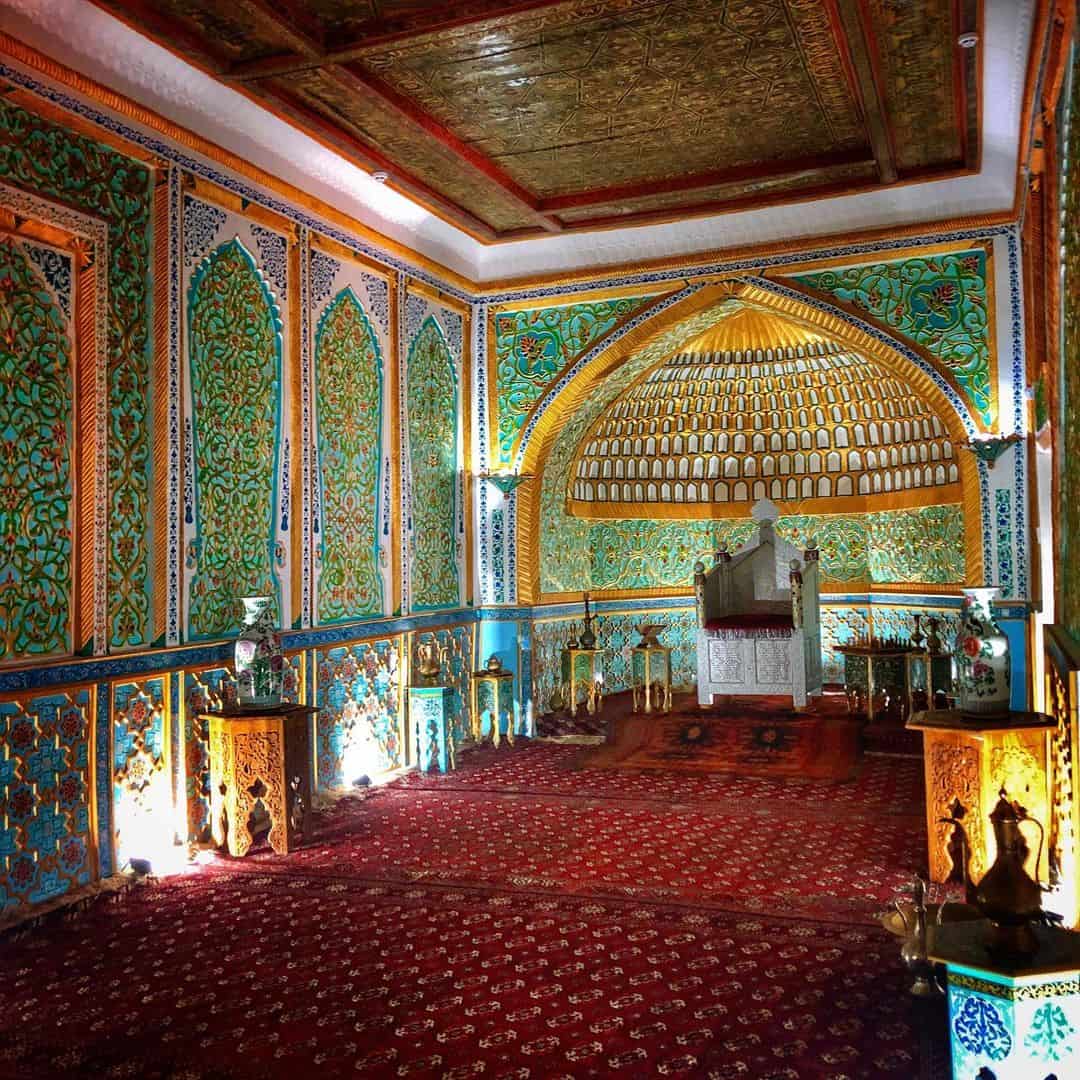 Allah Kuli himself, however: not so beautiful. Here’s what he did one day when he was in a bad mood:

The palace was commissioned by Allah Kuli Khan as part of an ambitious building project which included a caravanserai, tim and madrassah. Plans for the extravagant new mansion were laid in 1831 which incorporated a tight two-year building schedule. When the architect, Usta Nur Mohammed Tajikistan, timidly pointed out that this timescale would be impossible he was promptly impaled – a death which could take up to eight hours.

Not easy to be an architect in those days. And it did not even help. Allah Kuli found a new architect, and 1,000 Persian slaves to work on his project; still, it took eight years to complete. 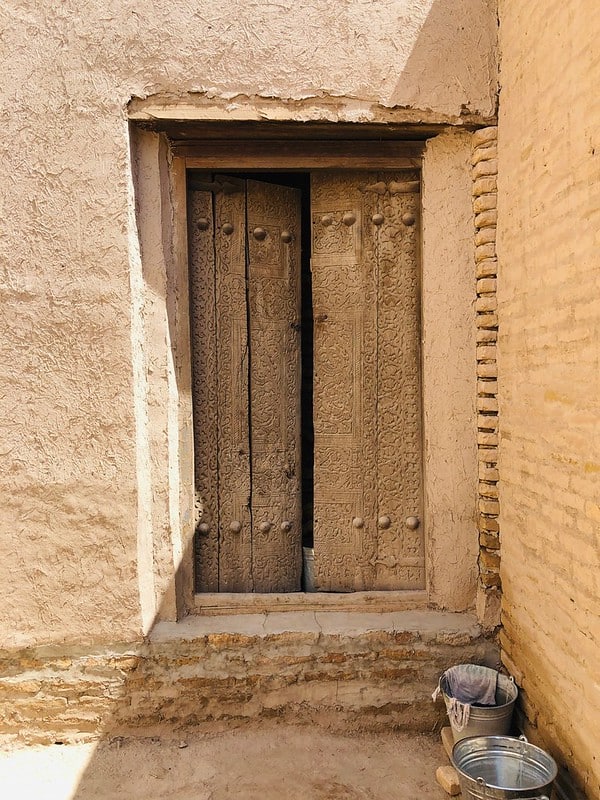 Khiva has more of the macabre to it: in a rather anonymous-looking building is an old jail with dummies in chains and various torture instruments on display. Morbid curiosity pulls me over for a closer look at a series of sketches. Doubt they would win any awards for artistry, but, jeez, the motifs! 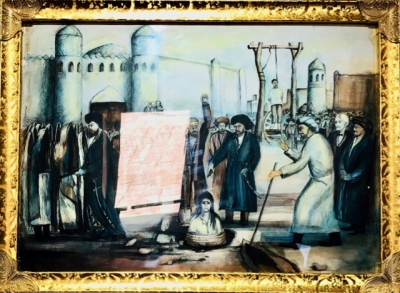 (In case seeing that one was enough for you, I will keep this ‘methods of execution’-gallery small, so you do not have to see them too up close. Unless you want to, in which case you can click on the picture. Description in three languages provided.) 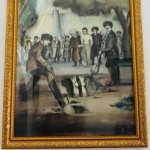 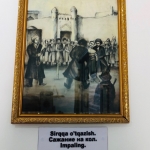 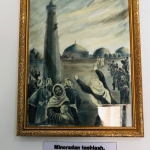 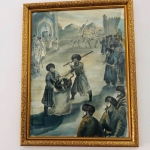 Yikes! Let’s get out of this place! And head to a place of life rather than tortuous, twisted termination. 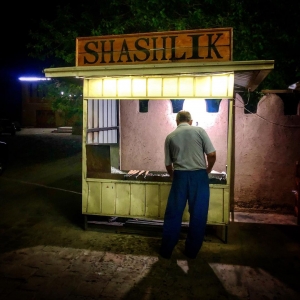 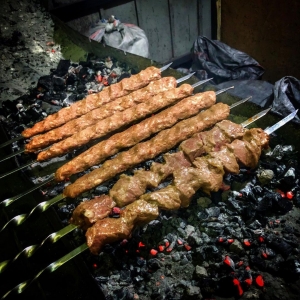 At the bazaar, women in brightly coloured dresses sell fruits, nuts, vegetables, bread. Shashlik and samsas are sold from kiosks.

There are also craft workshops and stalls peddling local arts and crafts: silk scarves and hand-woven colourful kelims (and souvenir pens that looks like someone wrote Khiva on them with a black felt tip pen)… 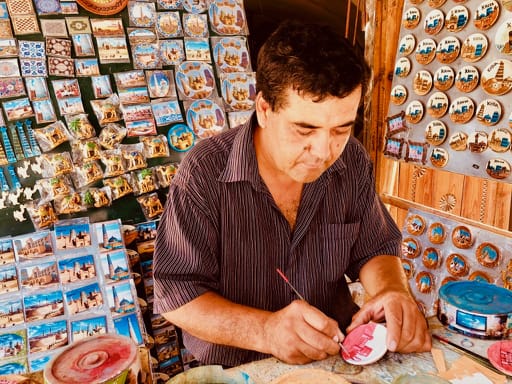 How ’bout a hand painted souvenir for your gran?

Itchan Kala is also the home of about 3,000 humans. They, like the rest of us, have washing to do. 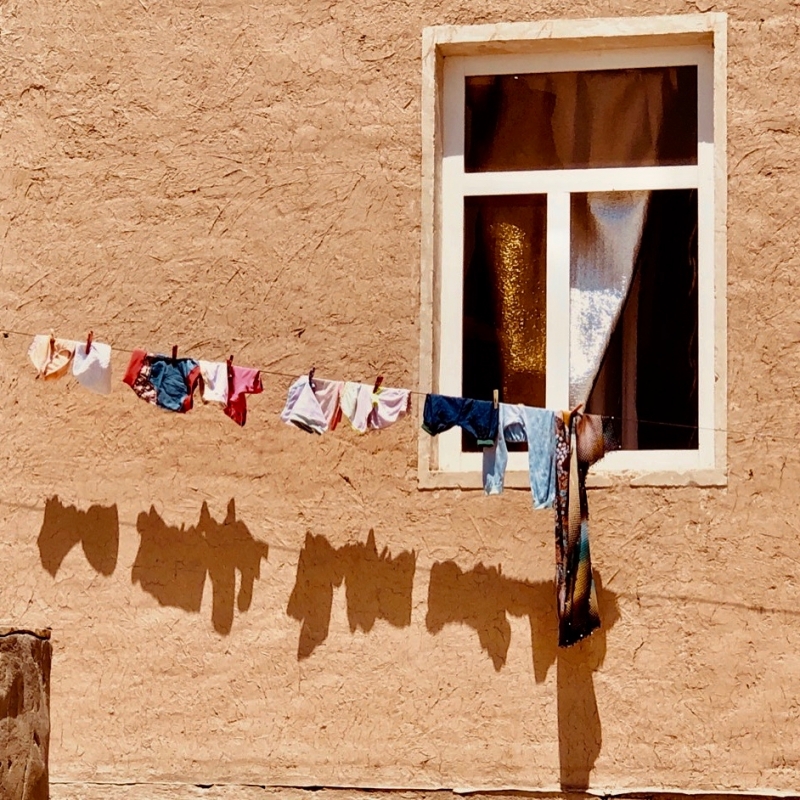 What’s in a name?

It’s an odd name, Khiva, isn’t it? One theory attributes it to Shem, son of Noah. Shem, you see, wandered through the desert all by himself and decided to build a well. People that passed, tasted the water from this well and exclaimed ‘Kheyvak’. Sweet water.

Interesting as that story is, seen through the lens of logic, I’m afraid it fails on all counts.

Remember the story of Noah? We humans were so corrupt and violent (what else is new?), God got fed up, and decided to kill us all. And all animals too, while he was at it. (Always thought that was grossly unfair.)

Only one family and one pair of each species were to survive. Enter Noah, cause he was a righteous man.

Build an ark, said God. And do it now! Posthaste!

No sooner had Noah finished the task and brought on board his wife, his sons and their wives, and the animal pairs, did the floodgates of heaven open. Literally.

After 40 days of rain, and 150 days of a flooded earth, all ‘earth-based life’ had drowned, except those on the ark.

…And God blessed Noah and his sons, and said unto them, Be fruitful, and multiply, and replenish the earth.

In short, they had a job to do.

Off the top of my head, I see at least three inconsistencies with the Shem/Khiva theory:

Gee, thanks. Way to go, Sophie; ruining a good story with logic.

Sorry. Not sorry. But perhaps you will be pleased to hear the well is still around?

Sadly, we missed it.

Itchan Kala from above 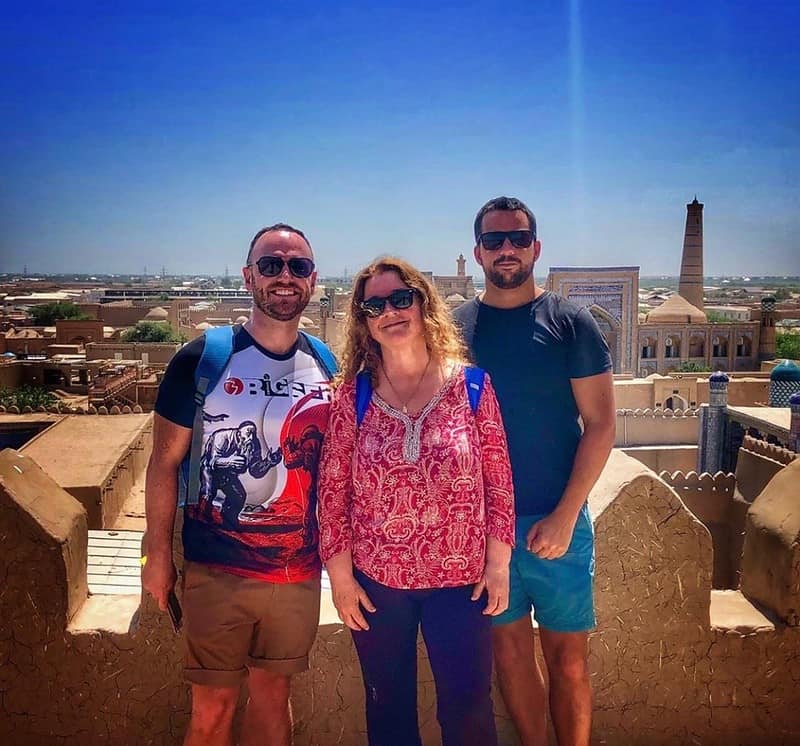 Here on top of the city walls, we are about 10 metres above ground and have a great view of Itchan Kala, the 2.2 kilometres of walls, and present-day Khiva further out. 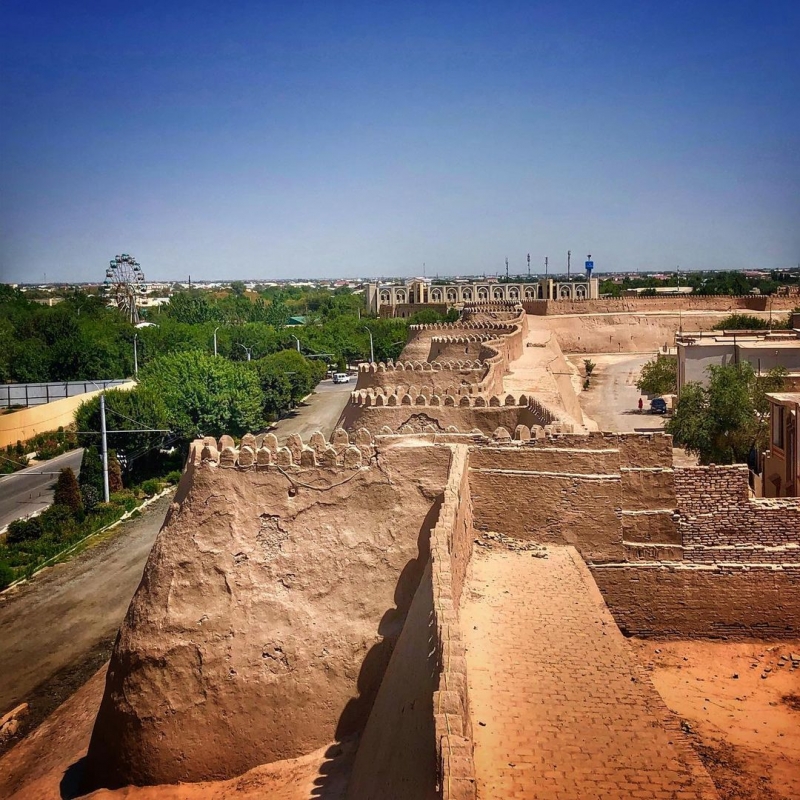 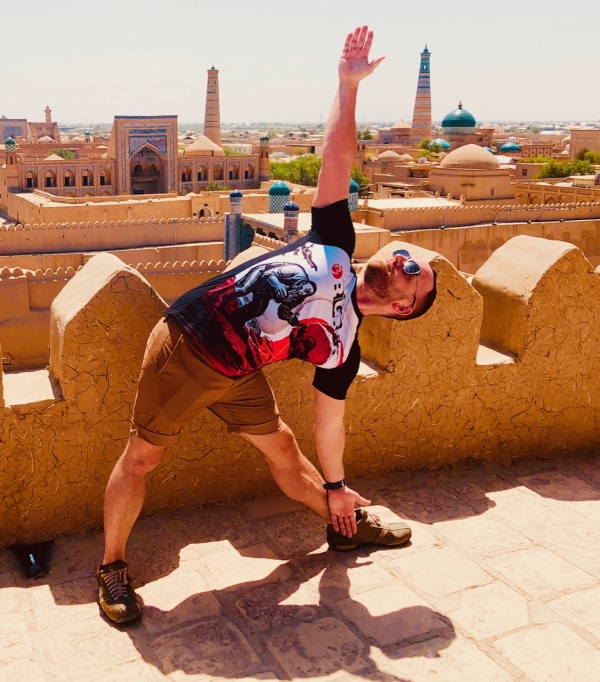 The world. Yoga. The world of yoga. Here’s Tom, doing the trikonasana, with Itchan Kala as backdrop. 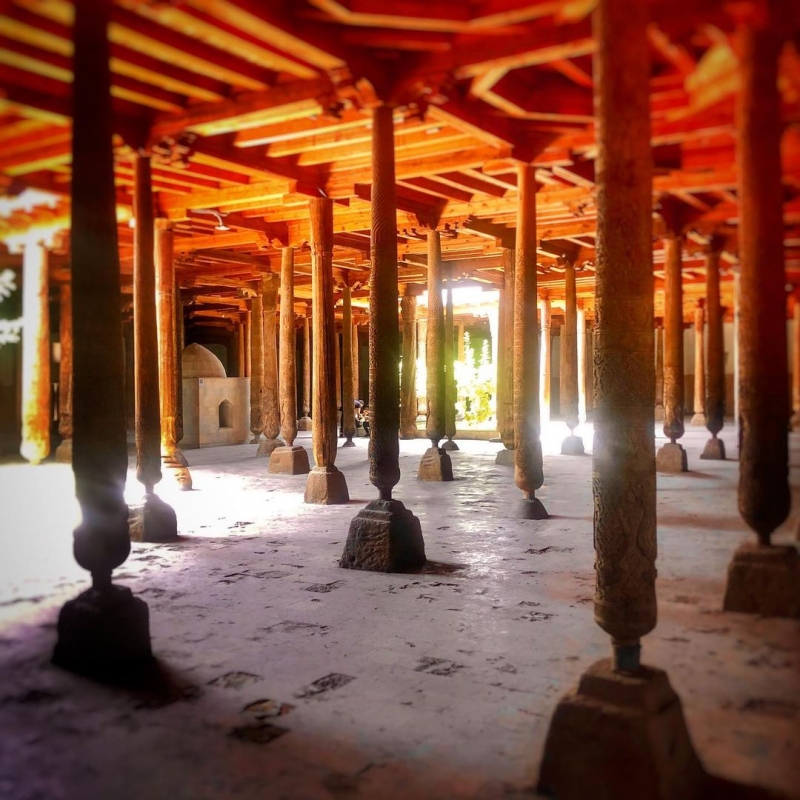 I particularly enjoy Djuma Mashid (the Friday Mosque). This is not an ordinary mosque with tall arches and rounded cupolas to be awed by. Instead, wandering amongst the wooden colonnades feels like being in an ancient, tranquil forest. I’m walking in the shade, surrounded by trees, and over there is a glade, where the sun peeks through. 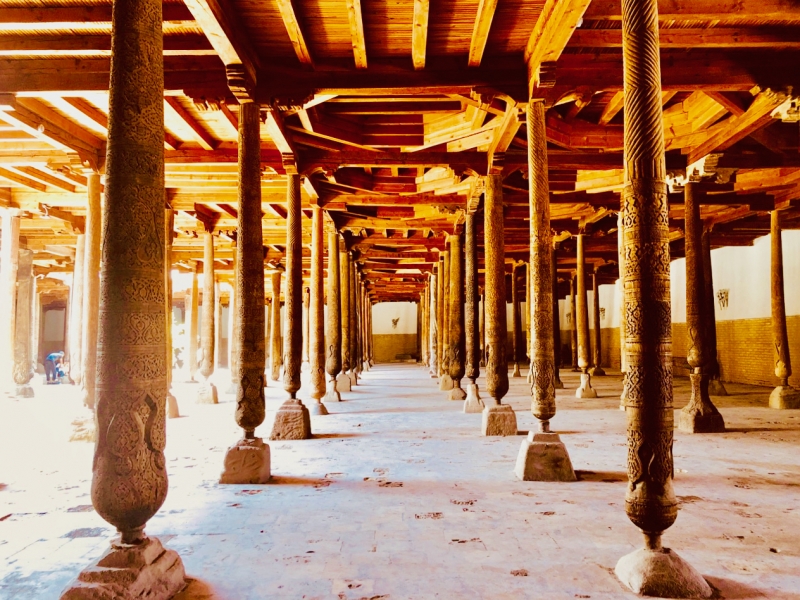 Inside the 212 elaborately carved wooden colonnades 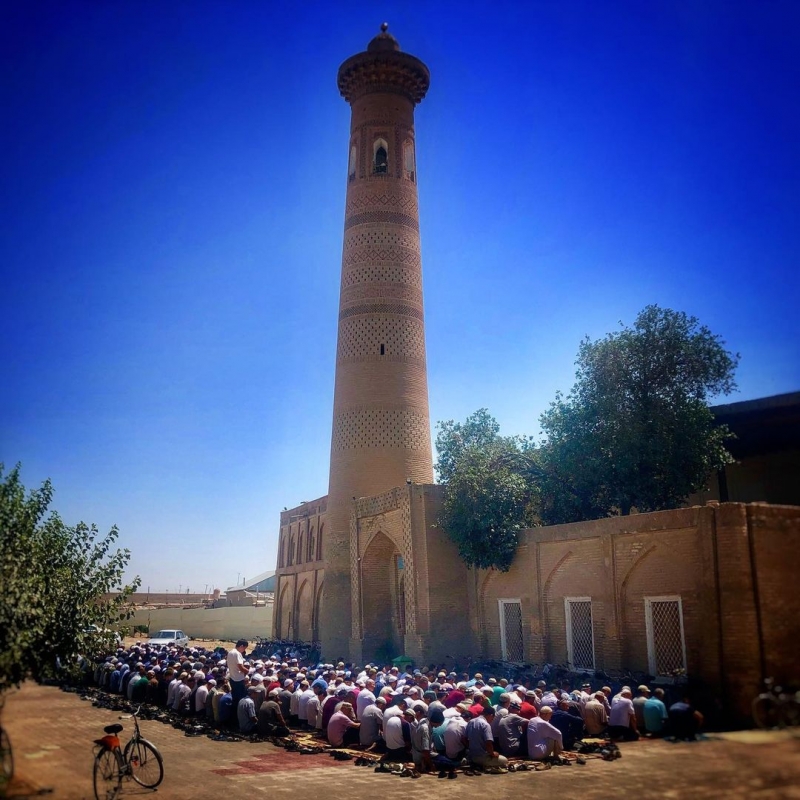 Friday worshippers outside the mosque

The most striking construction in Itchan Kala must surely be the short and stubby and oh so pretty Kalta-minor minaret with the stunning tiles; blue and green and everything in between. Kalta-minor simply means short minaret. It was meant to be the tallest minaret in the Islamic East, but the khan died before it was finished. We walk past, again and again. 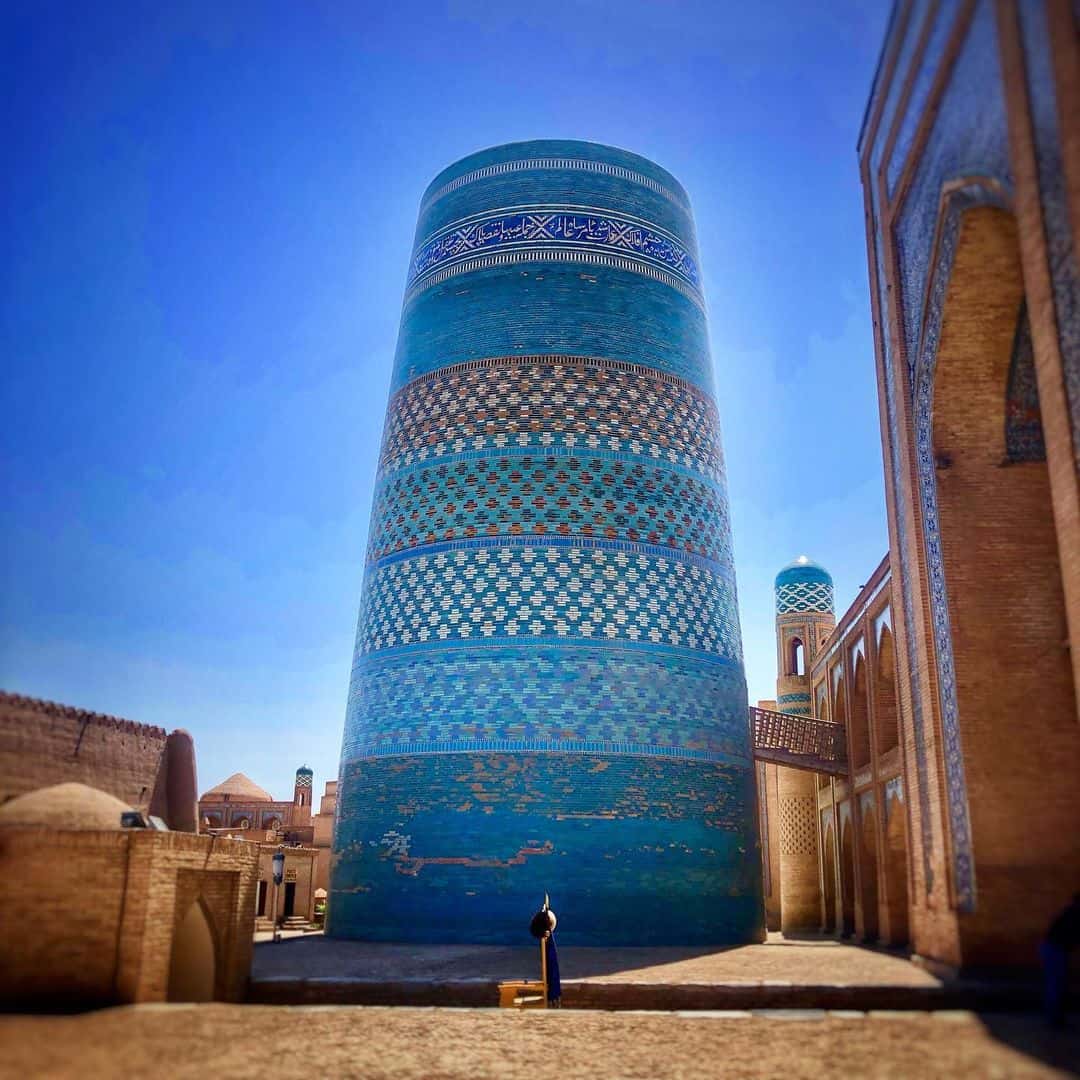 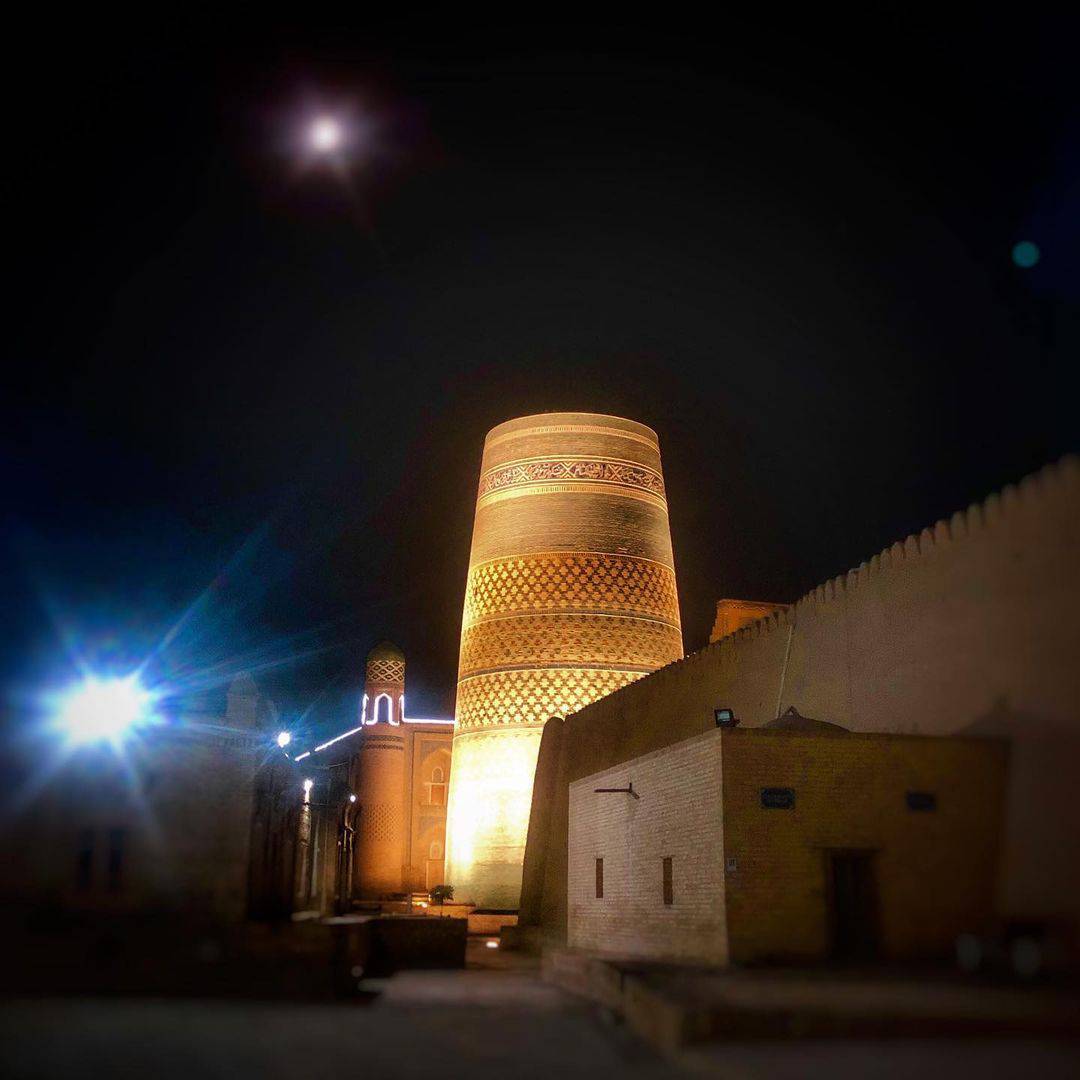 The unfinished Kalta-minor minaret – by day and by night.

The 44-metre-tall Minaret of Islam Khoja presents another opportunity for what must undoubtedly be amazing rooftop views. 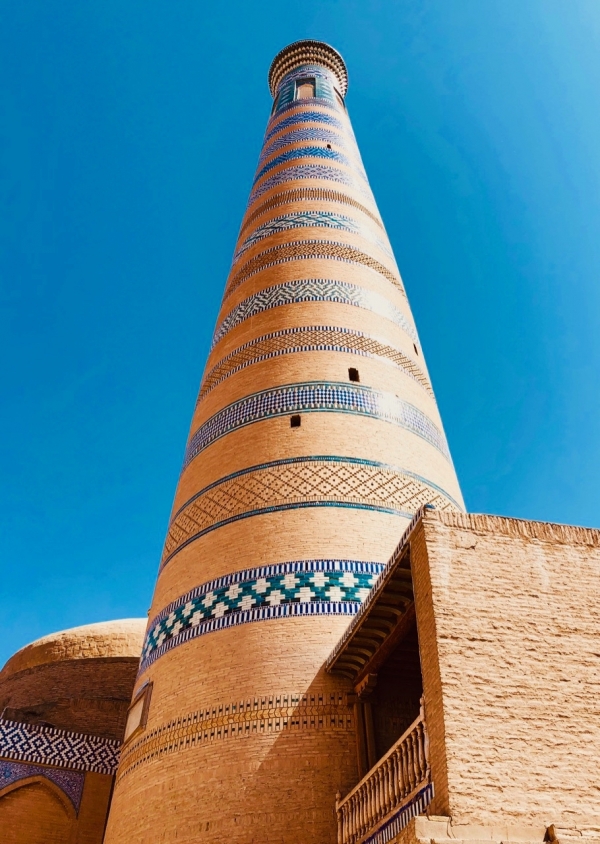 But we’re simply defeated by the heat, and settle for climbing just the first 10 or so steps. 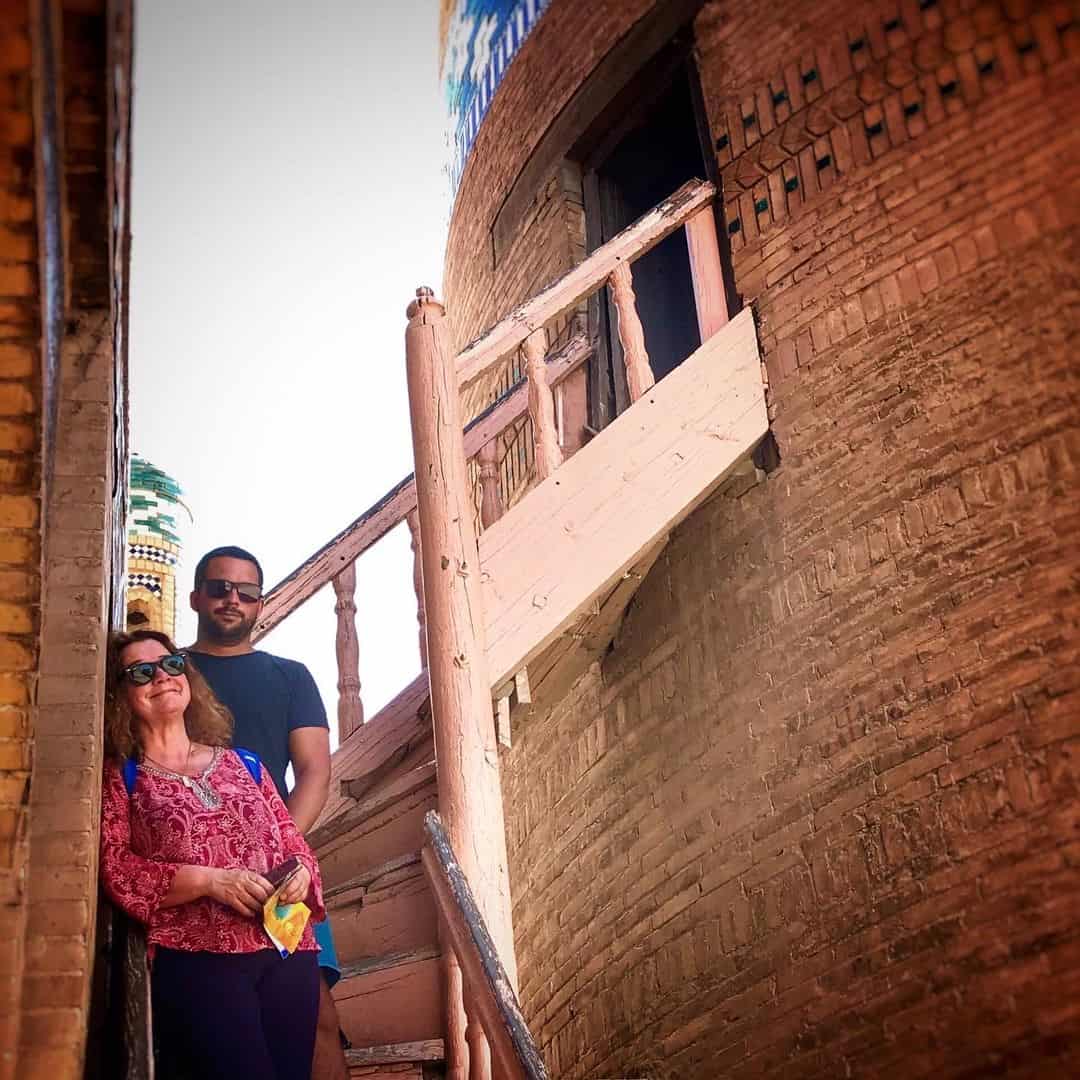 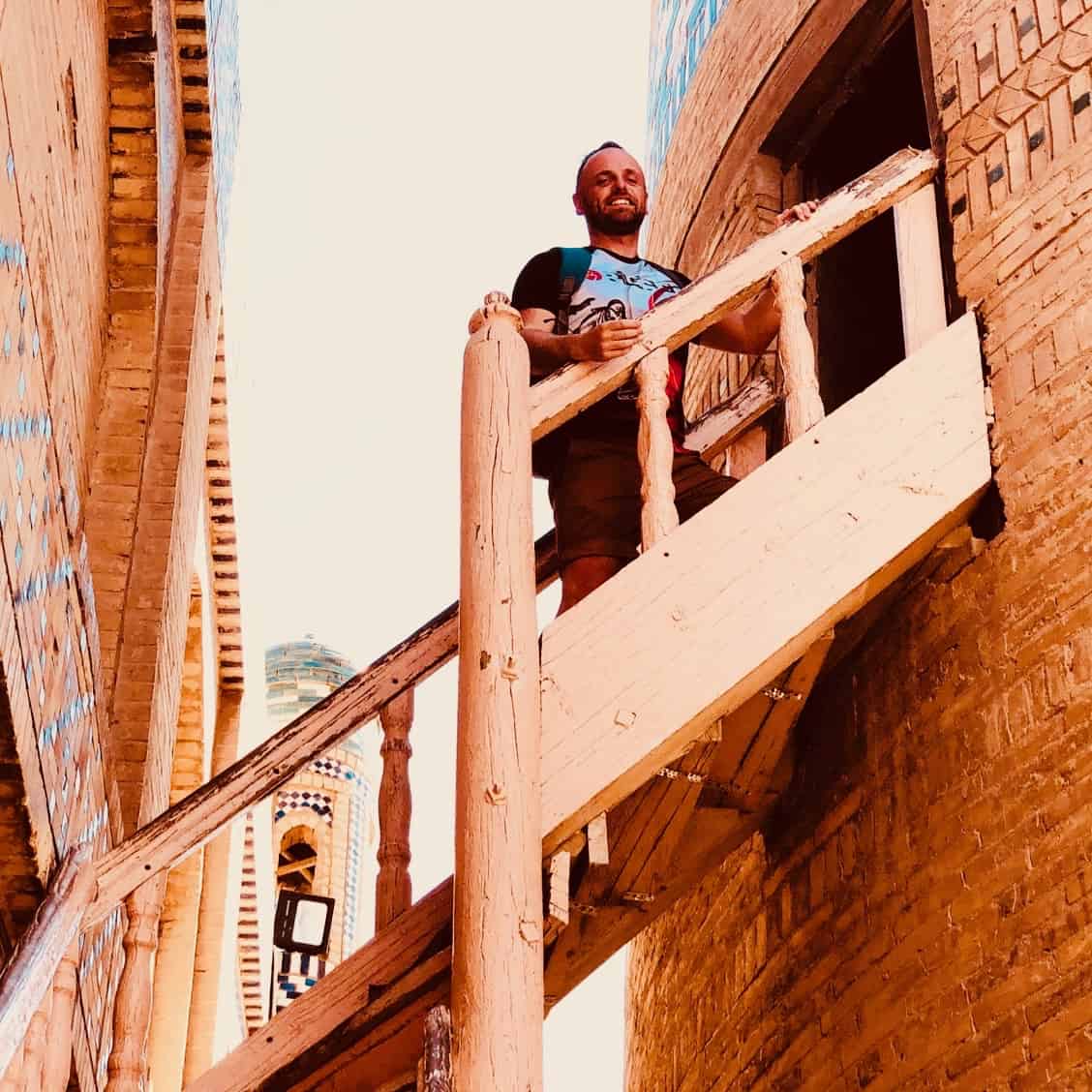 Khiva, Bukhara and Samarkand are the most famous world heritage sites in Uzbekistan. Of the three, Samarkand is the best known (that name alone!). Samarkand is also nearest the capital, Tashkent. It is a lively, modern city in itself, with the famous Registan monuments as just one part of it. Bukhara has a charming little centre.

Hopefully, your journey in Uzbekistan will include all three, but if it does not, and you only have time for one – even though it is the furthest away from Tashkent, I would choose Khiva, as it has the Itchan Kala. You know I like ancient cities hiding inside great walls: Carcassonne, Suomenlinna, Citadel de Blaye… Here we have a walled city, right in the middle of the desert, no less. Unbeatable. 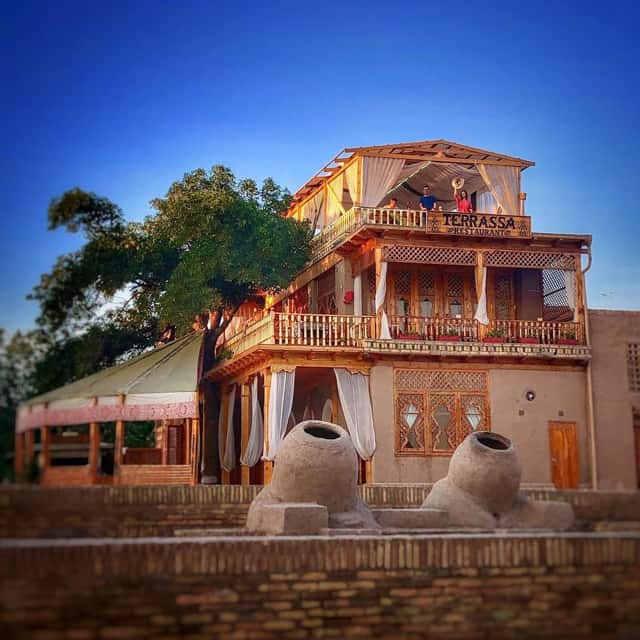 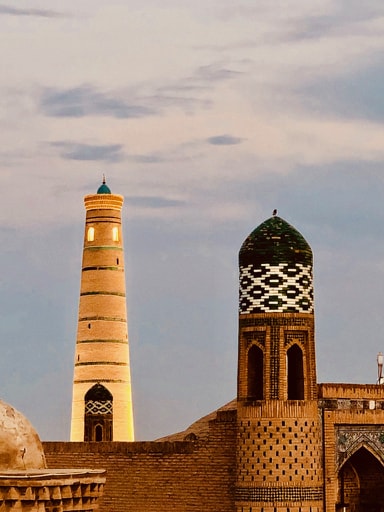 All photos by Andrew Morland, Tom Brothwell and yours truly. 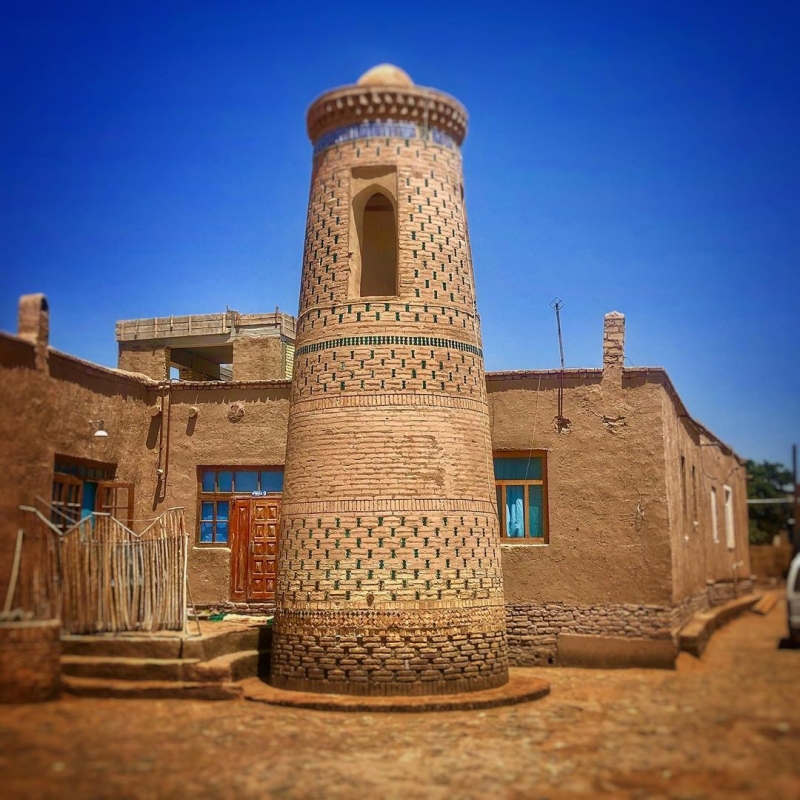