World at a Glance: The legend of Khor Virap

A few years back, I was in Yerevan, looking to visit a land that must not be named. An email and a few phone calls, and I was offered a lift with pilgrims, a whole bus full: from Beirut, from Syria, from Quebec, from Iran, from Sydney – an intriguing sample of the Armenian diaspora. Lively folks, too, it turned out. They invited me to join them for dinner and drinks and dancing. All.night.long. But that’s a story for another time.

Back on the road, the pilgrims were keen to stop and have a look at whatever took their fancy. They had all the time in the world. As did I. And so we made a stop at Khor Virap. 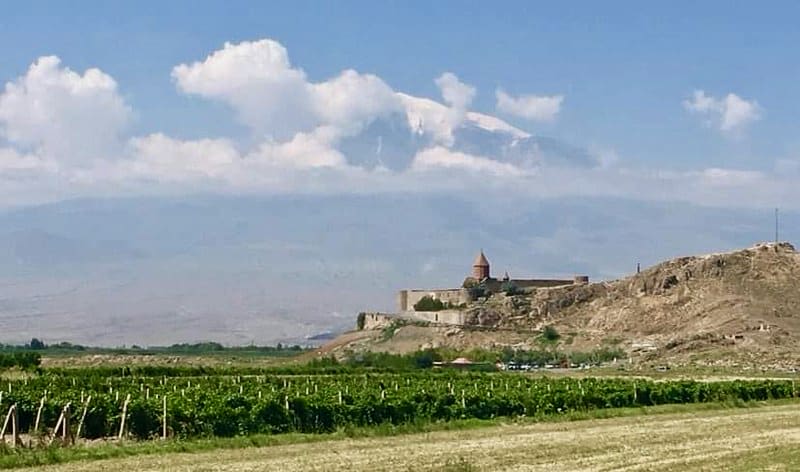 We’ve covered quite a few of Armenia’s churches and monasteries here on the blog. There’s Tatev, precariously perched on the brink of a deep canyon; reachable by cable car. There’s Akhtala, the copper mine monastery with the lovely frescoes. There’s the Byzantine monasteries of Haghpat and Sanahin, with the evocative grave stones. There’s the ruins of Zvartnots Cathedral, and then there’s Geghard Monastery, founded by Grigor Lusavorich, aka Gregory the Illuminator, Armenia’s patron saint, and the one credited with converting the country to Christianity. Took some serious dedication, as you’ll soon see. 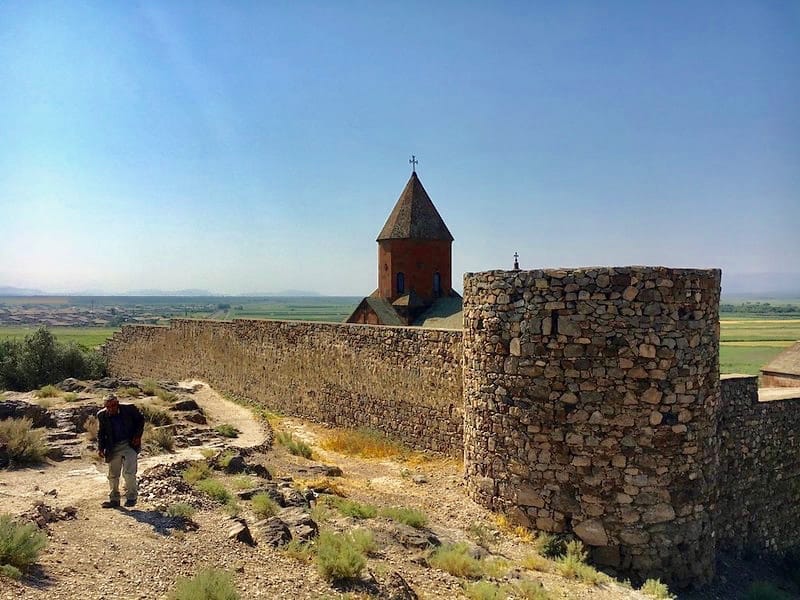 Khor Virap is located about 30 km south of the Armenian capital. As with any self-respecting monastery, it comes with a legend. This one features the patron saint himself. 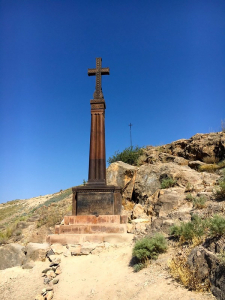 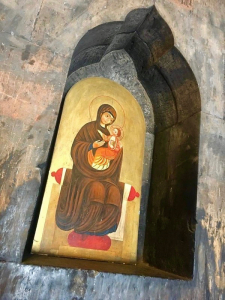 Khor Virap Monastery is located on the site that once was ancient Artashat, Armenia’s capital from 185 BCE to 120 CE.

Underneath the church there was a dungeon, a waiting cell of sorts, for people on death row. Our man Gregory spent 14 years in this pit, for daring to preach Christianity at a time when other gods ruled, and the then king, Tiridates III, was a firm believer in that other gang of deities.

Down in the pit, snakes and scorpions and other vicious venomous vermin kept poor Gregory company.

But lo, one day, Tiridates contracted a strange madness. He began chewing on his own flesh, and then was transformed into a pig!

Enter the king’s sister; bit of a dreamer she was. One particular dream kept returning: an angel appeared before her and spake. The king’s illness will only stop when Gregory is freed, was the message Ange conveyed.

Worth a try, they must have thought. And sure enough, as soon as Gregory came up from the pit and began praying for the pig king, he transformed back into human form. Tiridates saw the light; from that day forward he dropped the pagan gods and dedicated himself to the new religion.

When Armenia adopted Christianity as its official religion – back in 301 CE (or, I suppose I should say AD in this case), it happened right here at Khor Virap, where once there was a prison pit. An important place indeed, for the world’s first Christian country. 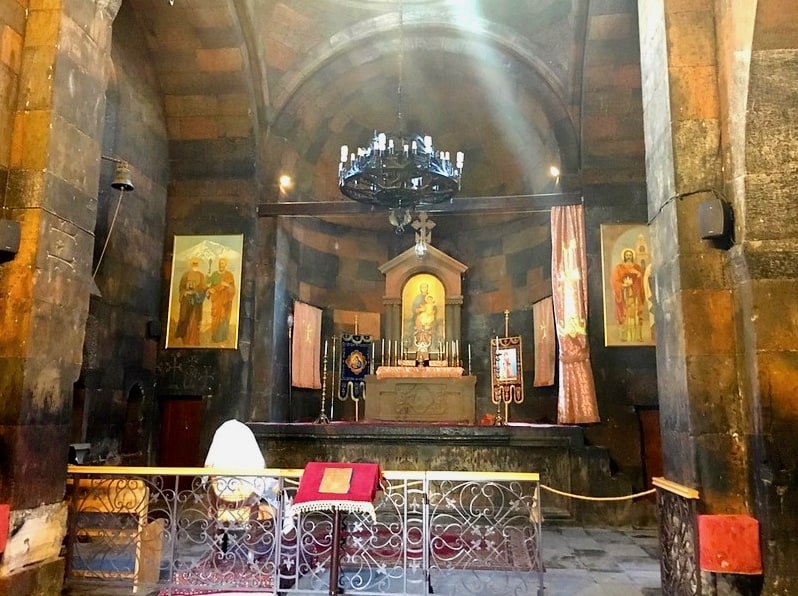 There are two buildings at Khor Virap, the larger St. Astvatsatsin chapel, and the smaller St Gevorg chapel.

Inside St Gevorg Chapel is a hole in the ground, leading down to a dungeon. Or – there are two actually. Two holes in the ground. And two dungeons. They’re not marked, so be careful you don’t stumble in. 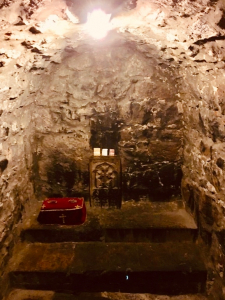 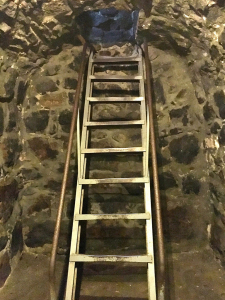 Is this the one where Gregory was kept prisoner all those years? Your guess is as good as mine. Slightly claustrophobic any which way you look at it. On the plus side, no snakes or scorpions here today. And there’s a ladder. Poor Greg only had a rope.

Back up in the light of day, I spot two familiar faces – or rather, they spot me, as I crawl out of the stone floor. Last night, we said farewell back in Yerevan. And here we are! 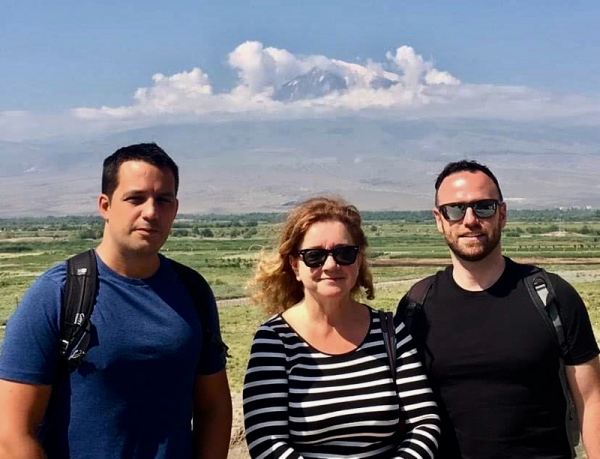 Khor Virap is located in the Ararat Valley, home to one of the most famous legends in the world, the one where Noah, after 150 days of flooding, lands his ark on a mountain top, climbs down the slopes and reboots life as we know it. (Never mind it was ‘the 27th day of the second month of Noah’s six hundred and first year‘. Genesis 8:13-14).

As always in this country, I’m intrigued by the sight of that mythical mountain. And here it is again, peeking through the haze behind us. This is probably as close to Mt Ararat as you can get in Armenia. Between us and the mountain, about 100 metres away, is the closed-off border with Turkey. At night, there are lights on the mountain, we hear. Turkish bases. American listening posts. 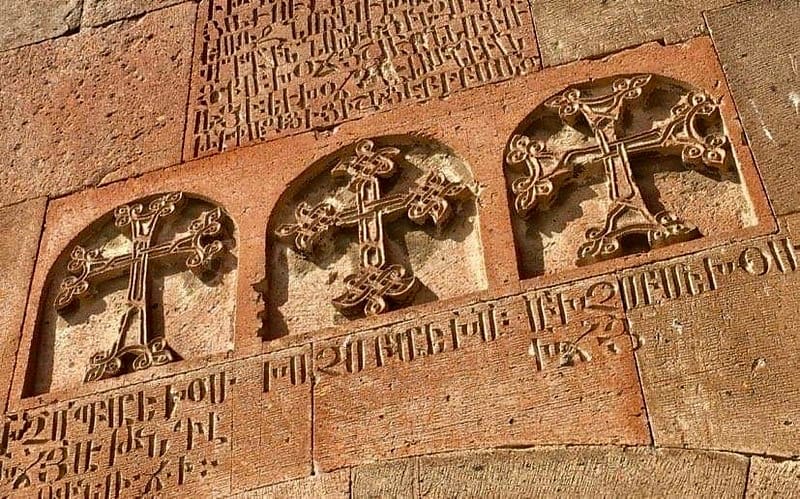 Photos by Andrew Morland, Tom Brothwell, myself, and one by an Australian-Armenian pilgrim girl.

World at a Glance is a series of short articles here on Sophie’s World, with a single photo (I know, I know, not even close this time), portraying curious, evocative, happy, sad or wondrous, unexpected little encounters. Double the encounter with this one.