Kinderdijk, the cat and the cradle (Day out Amsterdam)

Holland; what image comes to mind? Tulips? Indeed. Wooden clogs? That, too. The sublime paintings by Rembrandt van Rijn? Most definitely. Windmills? Oh yes! And probably the Kinderdijk windmills, specifically. Can’t get a more classical Dutch image than this. And I’ll tell you a bit about this most Dutch of ingenuities, but first, a little story: 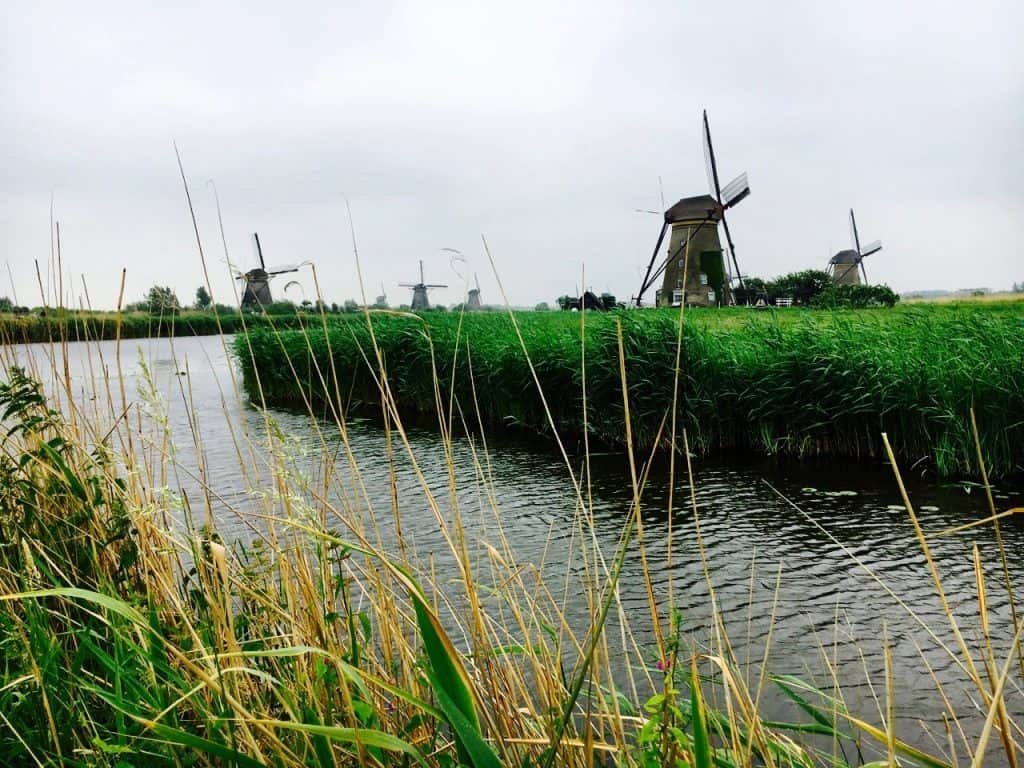 Have you played the string game the cat and the cradle? Or heard the 70s tune by Harry Chapin? Or read Kurt Vonnegut’s dystopian novel of the same name? Yeees…, you say. But what does that have to do with a world heritage site in the Netherlands? Well, pull up a chair and pour yourself a cuppa, and let me tell you the story. It’s short, it’s a bit Biblical, but most of all, it is touching. And if you’re not a cat person – in fact, if you see those fickle felines as selfish and/or stupid – well, you may just have to change your mind.

On a stormy autumn night in 1421, a great flood tore down the dikes** surrounding the polder* and took the lives of thousands of people. After the torrent subsided, people went to check the damage, and noticed a cradle floating on the water. In it was a cat, jumping from side to side to keep the cradle in balance and prevent water from entering – and a nice and dry baby, sleeping peacefully.

There’s another, more brutal version of this story:

In medieval times, food was scarce and there just wasn’t enough to feed all the children. Only boys were wanted; they were more useful, as girls couldn’t go to war (though why ever not?). When a girl was born, a family council was held and it was decided whether the baby girl should live or die. The poor mother had no vote, she was usually suffering the wrath of her mother-in-law for having given birth to a girl in the first place. Now, one baby girl was rescued by a kindly midwife who hid her from the furious matriarch. The midwife couldn’t save her from the water, however. When the flood came, the house was torn down and the cradle floated off. With the cat! And you know the rest. (A long version of this legend is here.)

And so: Kinderdijk, Children’s Dike.

The Kinderdijk windmills system was built for much the same purpose: keeping the water at bay, and thus saving the village. 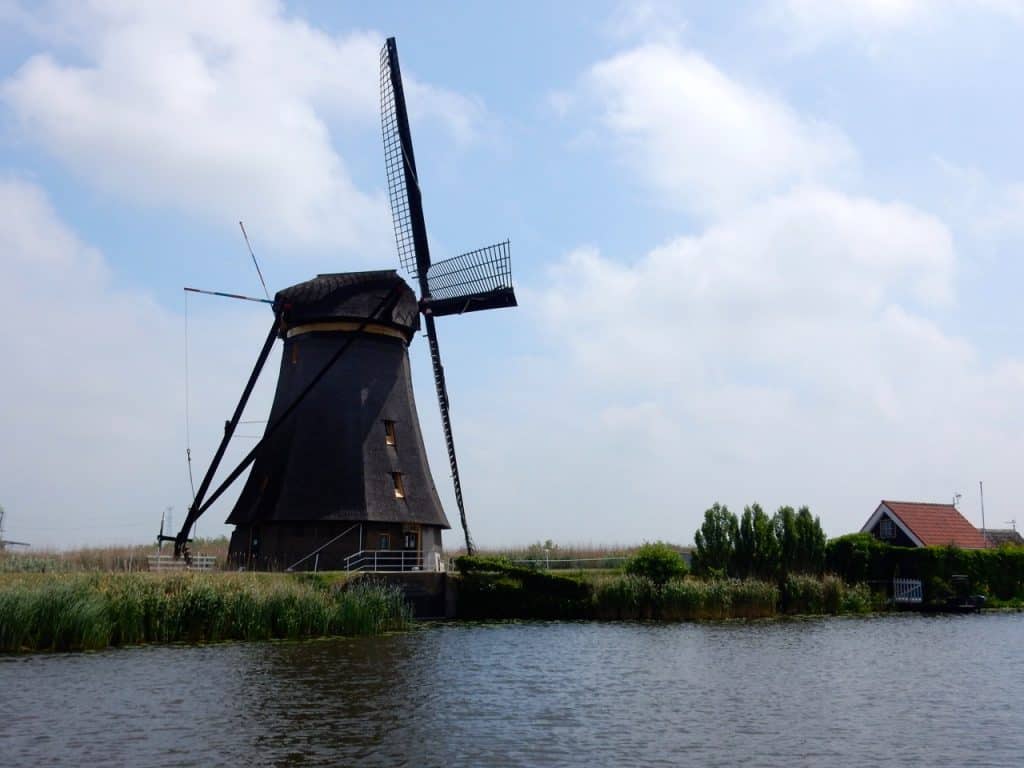 You can find windmills in almost every town in the Netherlands. But only in two places can you see so many: at Zaanse Schans – and here at Kinderdijk. (The windmills at Zaanse Schans were used for milling flour rather than water management.) Other than that, there is no comparable site anywhere in the world, on or off the world heritage list.

The windmills at Kinderdijk are very well preserved and the whole scene is a photographer’s/painter’s dream. But they are much more than sweet motifs. For centuries, these picturesque structures played a supremely important role in controlling water.

More than most, the Dutch must live with nature’s vagaries, and cooperate closely with wind and water. At Kinderdijk, everything is below sea level. Constructing hydraulic works to drain the land, making it arable and livable, has been a basic necessity for more than 700 years.

The windmill system provides an ingenious solution to this flood-prone area. Centuries old technology let the windmills pump excess water from the low-lying polder into a reservoir and drain it into the rivers. Of course, nowadays, the real work is done by diesel-driven pumping stations, but you can see the windmills in operation during the summer months: 19 windmills in such a small space makes for a spectacular sight and sound show. 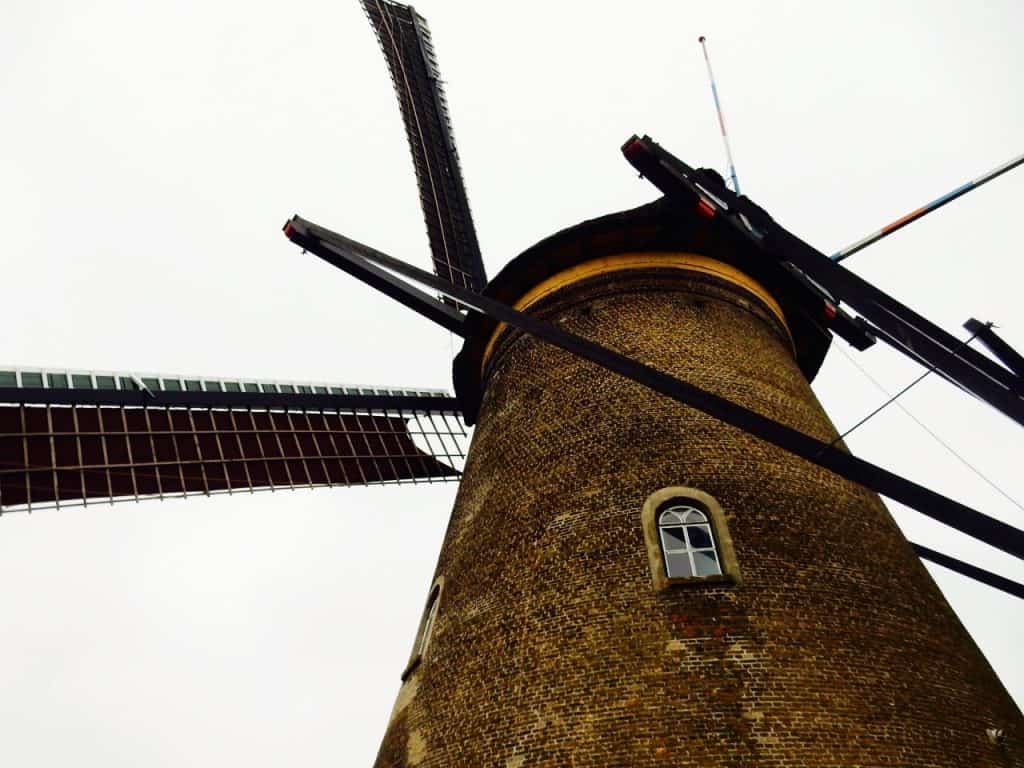 I like UNESCO’s description of the visual that meets you here:

The landscape is striking in its juxtaposition of its horizontal features, represented by the canals, the dikes, and the fields, with the vertical rhythms of the mill system. 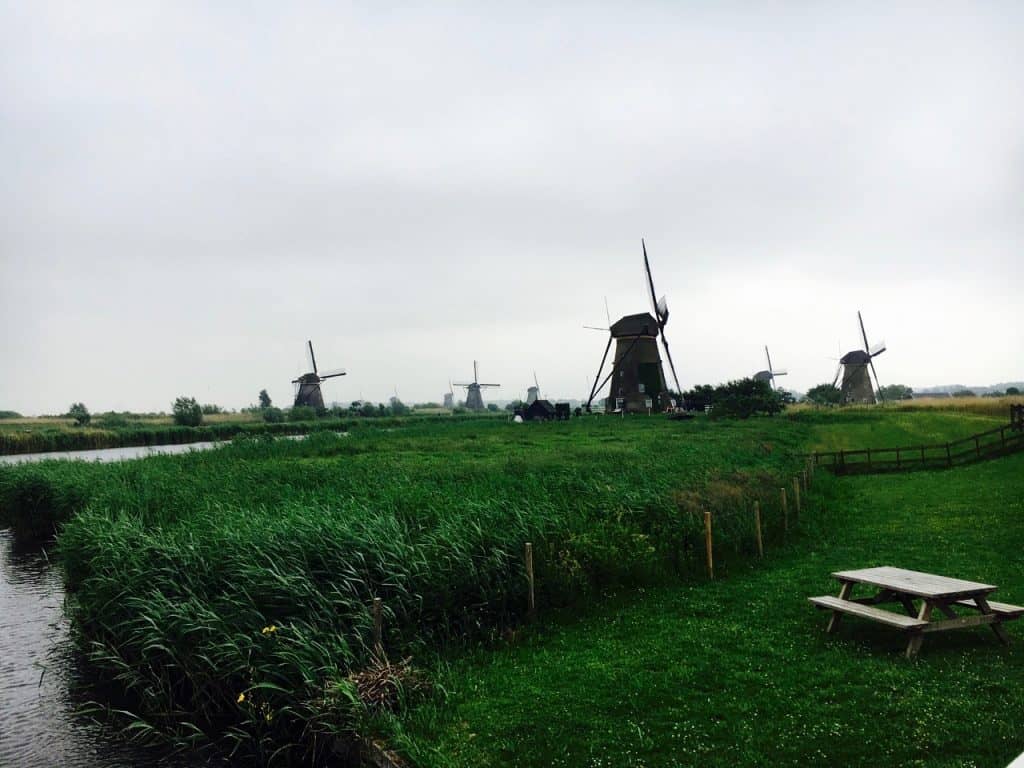 There are two museum mills at Kinderdijk. Step inside one and see how the miller and his family lived and worked in the past. The windmills served as working and living space; water management, and also the (tiny) home of a family, sometimes with as many as 13 family members! 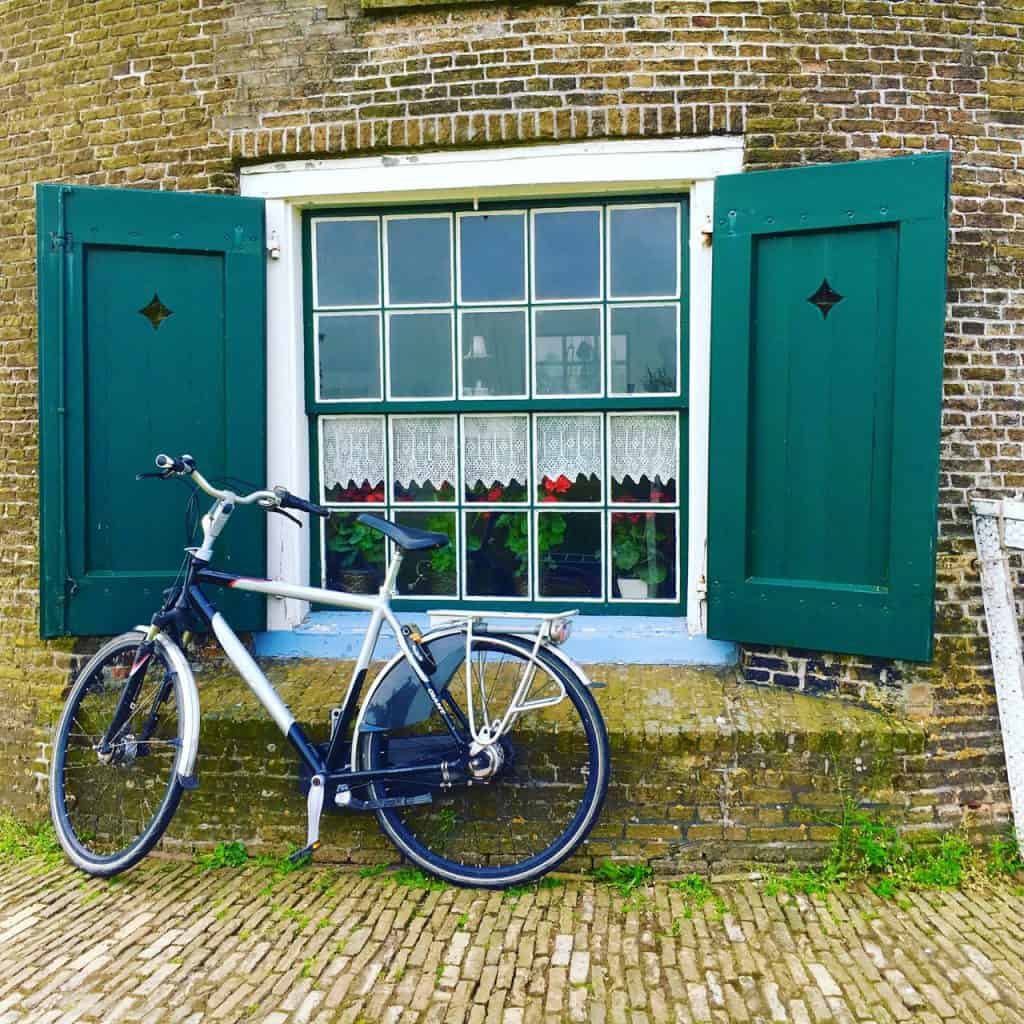 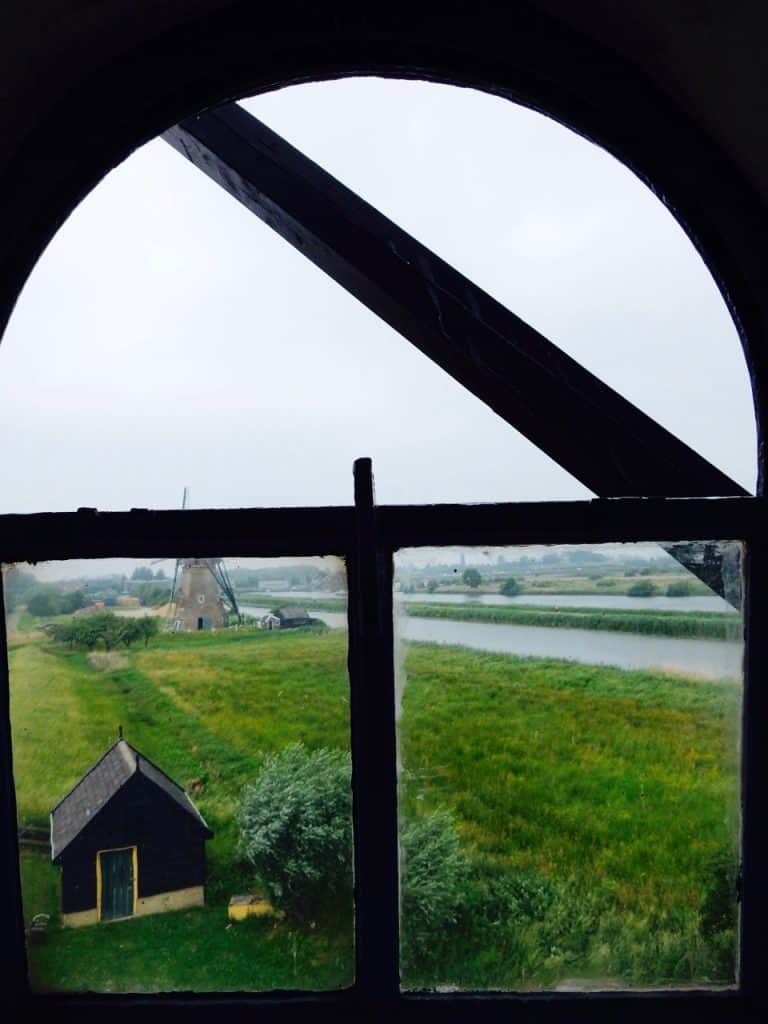 View from the mill

Inside the mill, we see photos of the Hoek family, millers for generations: a school class in 1909, out strolling with the pram in 1930, a young boy in 1941. 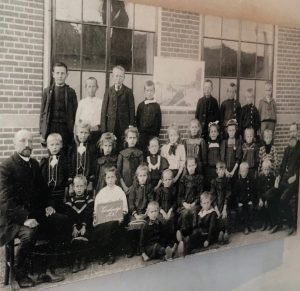 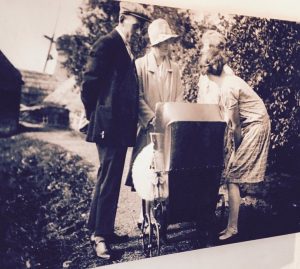 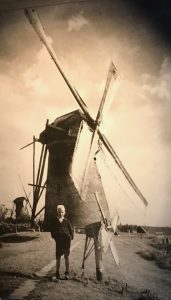 Family sleeping quarters. Not exactly spacious. But rather cosy, I think. 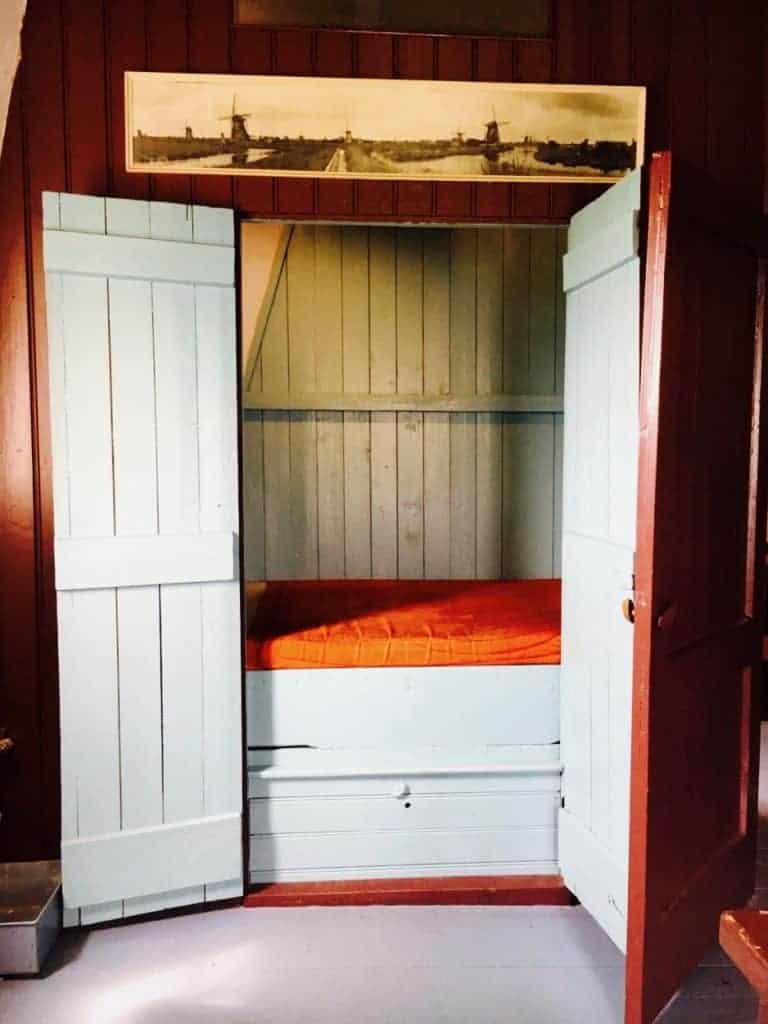 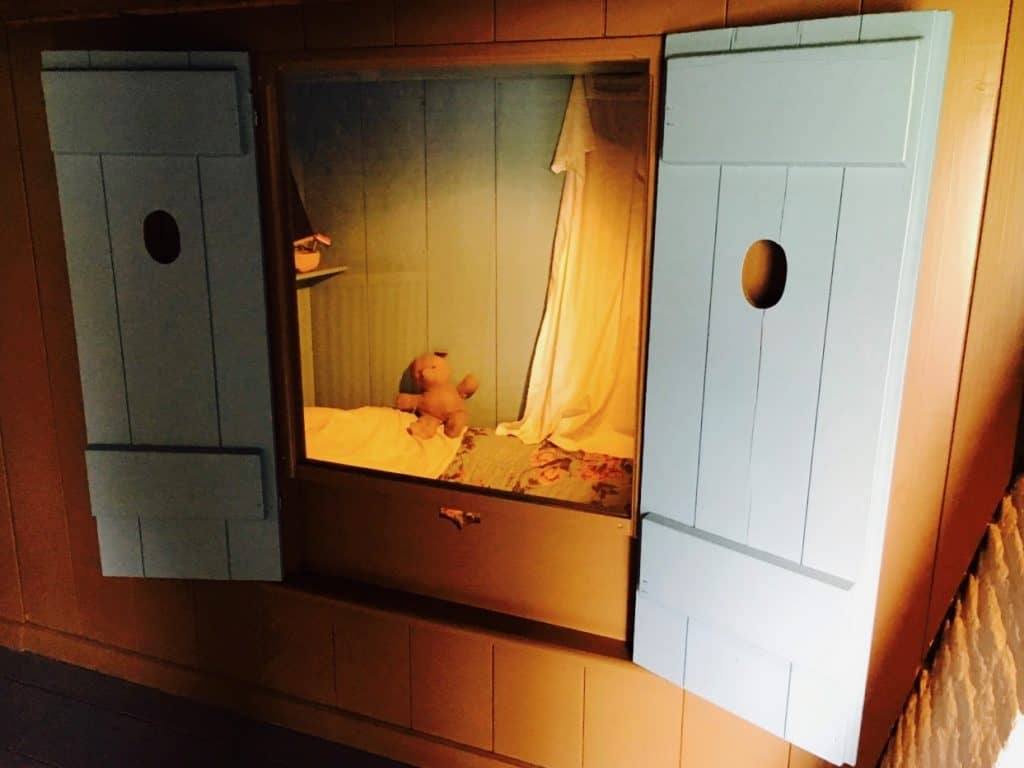 … and everyone’s shoes by the entrance. 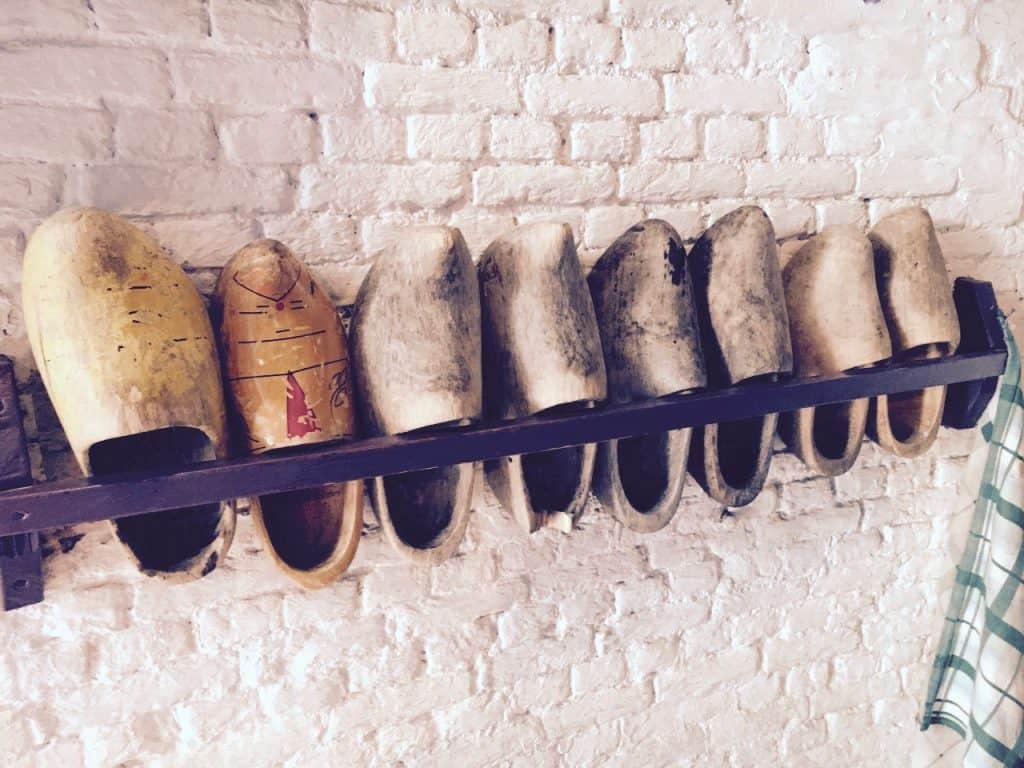 The Kinderdijk windmills are just half an hour from Rotterdam by waterbus. Other options include a regular bus, a water taxi, or a one-hour bicycle ride. You could even walk along this landscape, so quintessentially Dutch. Just watch out for those cyclists.

Canals, sluices, locks, dikes, polders, windmills, cows in fields, the panorama before you will feel worlds – and centuries – away from the futuristic skyscrapers of Rotterdam. Picture postcard perfect, particularly when the tulips are in bloom.

In the other direction, Holland’s oldest city, Dordrecht, is 30 minutes away by waterbus as well, or 45 minutes by bicycle.

Disclosure: I visited the Kinderdijk windmills as a guest of VisitHolland and KLM. All opinions are mine, all mine, as always, as ever.