Another bright and early morning – up at 0530 – for an early visit to the temple at Kom Ombo before the crowds. Increasingly, I mind less and less having to get up before the sun. Today, it feels almost natural. I mean, of course we’re up at 0530. Now, if I could only get my daughters to see it that way.

Kom Ombo is a lovely temple – and an unusual one, as it’s dedicated to two gods: Horus and Sobek, the crocodile god. Divided in two, the left part was for Horus (a different Horus than the one at Edfu, some say – often calling him Haroeris, but still falcon-headed), while the right was Sobek’s domain. Consequently, there is a duality to everything. You get two-for-one at Kom Ombo: two entrances, two chambers, two courts, two sanctuaries. Separate but together.

Once, the Nile swarmed with crocodiles. In fact, Kom Ombo was a major habitat for these ancient scary creatures. Considering how important the Nile was to the Egyptians, worshipping a crocodile god made good sense. You’d want to stay on the good side of those beasts laying in wait on the river bank, ready to eat you and each other. Also, I suppose worship and fear often go hand in hand.

Crocs were sacred and often held captive. Our guide tells us the Egyptians would pierce the crocs’ ears and put anklets on them. And they would be fed human food: bread, meat, wine. They were often given elaborate burials when they died and even placed in tombs. 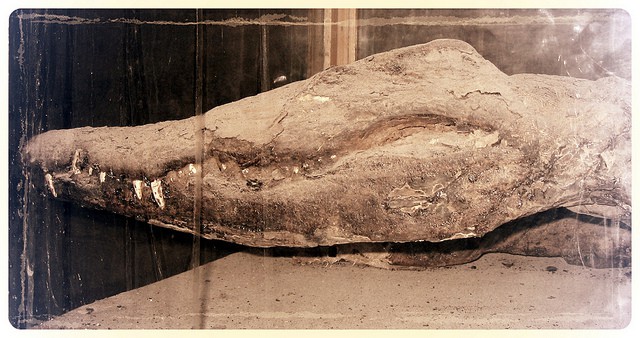 As we wander about the temple, we stumble upon three mummified crocodiles. Cat loves these. Odd to think, these crocs have been around for a few thousand years, and probably will be here long after we’re gone!