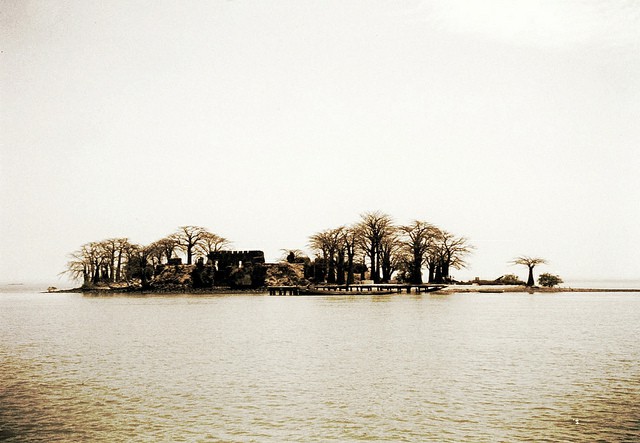 Many years ago, I was sailing on the River Gambia, and stopped here at what was then known as James Island. The tiny, yet important, island was renamed Kunta Kinteh Island in 2011.

The River Gambia gave Europeans access to Africa’s mysterious interior. Many were the explorers and traders who sailed up this mighty river; some even hoping to find that elusive sea route to India.

Kunta Kinteh Island is near the mouth of the river, by the Atlantic Ocean. It has had many roles throughout history: a meeting point for Arabs and Phoenicians, a fort for various colonial powers, and for that most agonizing phase of European interaction in West Africa, the slave trade.

If you’ve read Alex Haley’s book Roots, you’ll remember Kunta Kinteh, a man who was brought to the USA as a slave in 1767.

World at a Glance is a series of short, one-photo posts here on Sophie’s World, portraying the curious, evocative, happy, sad, wondrous, or unexpected.