Lauterbrunnen and up in the Jungfrau 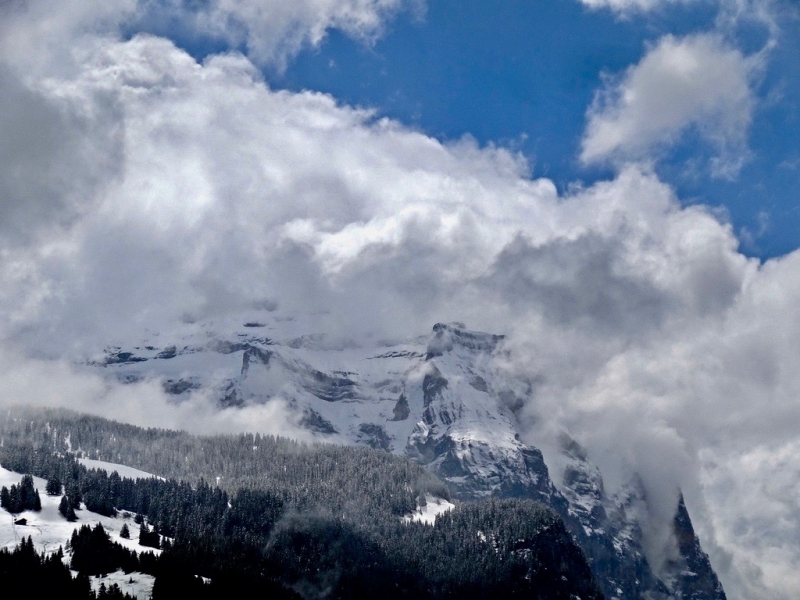 I’m dreaming of glaciers lately, which you may have deduced. Possibly because of all this snow. So while we wait for spring to get here (come on, already!), why don’t you come with me to another glacier. To Jungfrau-Aletsch. It’s not going to be strenuous at all: we’ll take the train up to 3454 metres. Once up in the heavens, we’ll take a walk. Can’t call it hiking; just traipsing around, really. Easy stuff. And, as this is me you’re going with, there will be a few digressions along the way.

Heading into the mighty Jungfrau, we have two choices: going through Grindelwald or Lauterbrunnen. I chose the latter.

The train from Interlaken to Lauterbrunnen takes only 20 minutes, then we wait exactly 12 minutes (nothing random about Swiss train schedules), before the next train takes you up into the massif.

But wait a minute. We’re not in a rush. The trains leave every half-hour. Let’s take a later one – and explore Lauterbrunnen a bit. You won’t be disappointed. (Don’t worry, we won’t be doing anything irresponsible, like being persuaded to do that lunatic thing that people do here.)

We’re just going to step inside this mountain. 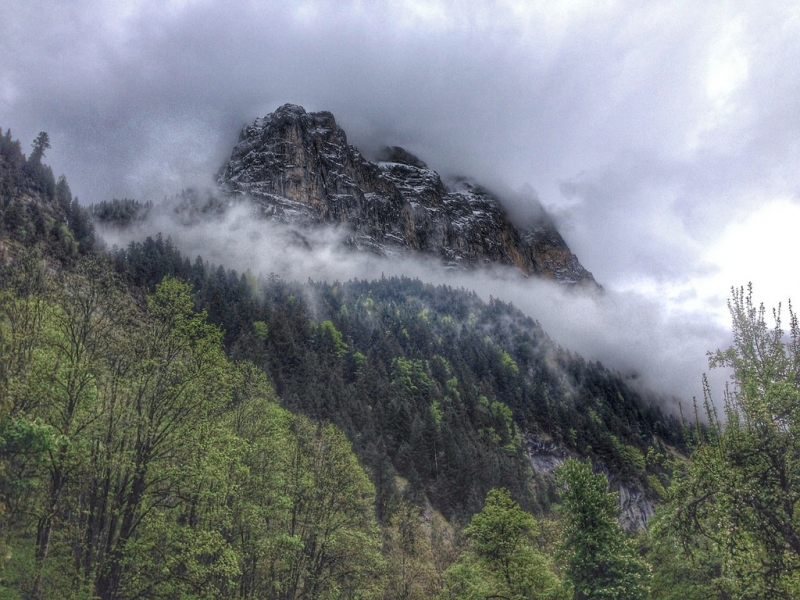 Lauterbrunnen Valley in the rain

‘Inside the mountain?’ I hear you ask. ‘Inside mountains live the hulder, with long golden locks and a tail – she lures you in with her silky singing, never to let you out again. I know my Peer Gynt.’

Mais non, mon ami. The hulder only appears in Norway. This is Switzerland. There won’t be a supernatural, seductive troll princess inside this enchanting mountain. Promise! And we won’t hear any dulcet voice, but rather the sound of thundering, roaring, rumbling, crashing, churning, foaming water – 20,000 litres pr second! And massive amounts of rocks and rubble moving with it. You see, waterfalls hide inside this mountain. Glacial water from Jungfrau, Eiger and Monch – the three glorious glaciers that dominate the landscape – meet inside here and form Trümmelbachfalle – the Trümmelbach Falls. And they are accessible by cable car. (Another sign we’re not in Norway: only cash is accepted here. Sooo 20th century.)

In seconds, the glass lift whisks us up to the sixth cascade. That’s some steep going there. 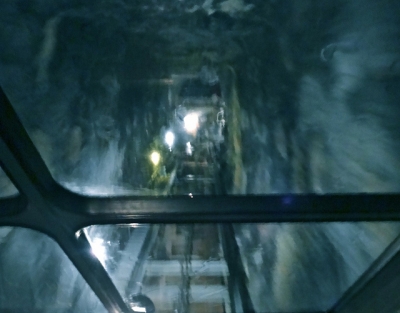 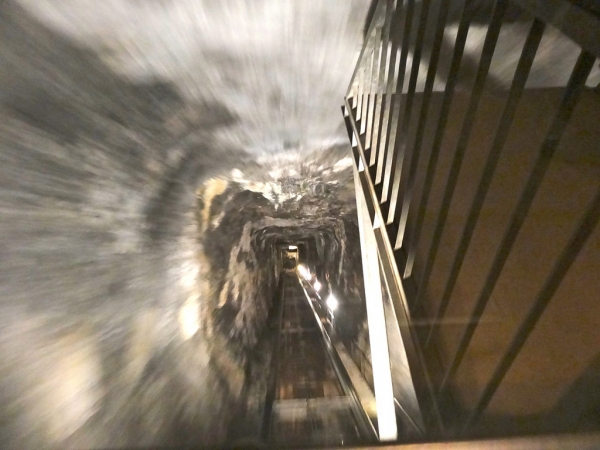 The rest of the way – up to level 10 – we walk up stairs and along pathways, gawking at waterfalls from various platforms and view points along the way.

Watch your step, my lovely. It’s damp and slippery in here. And do let’s hold on to the kids. That said, this is all perfectly safe. Unless you’re being stupid. Then it’s on you, whatever happens. Fortunately, you and I, we’re not stupid. 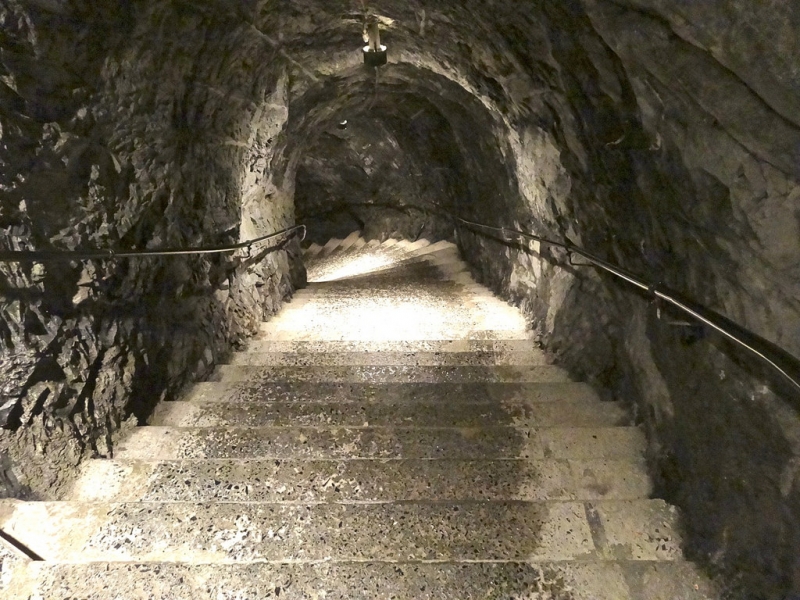 I’d show you a couple of cascade photos, but frankly, my then camera wasn’t up to the job in those dark caves.

Oh wait, this one isn’t too terrible – here’s a little waterfall (little, but no less noisy): 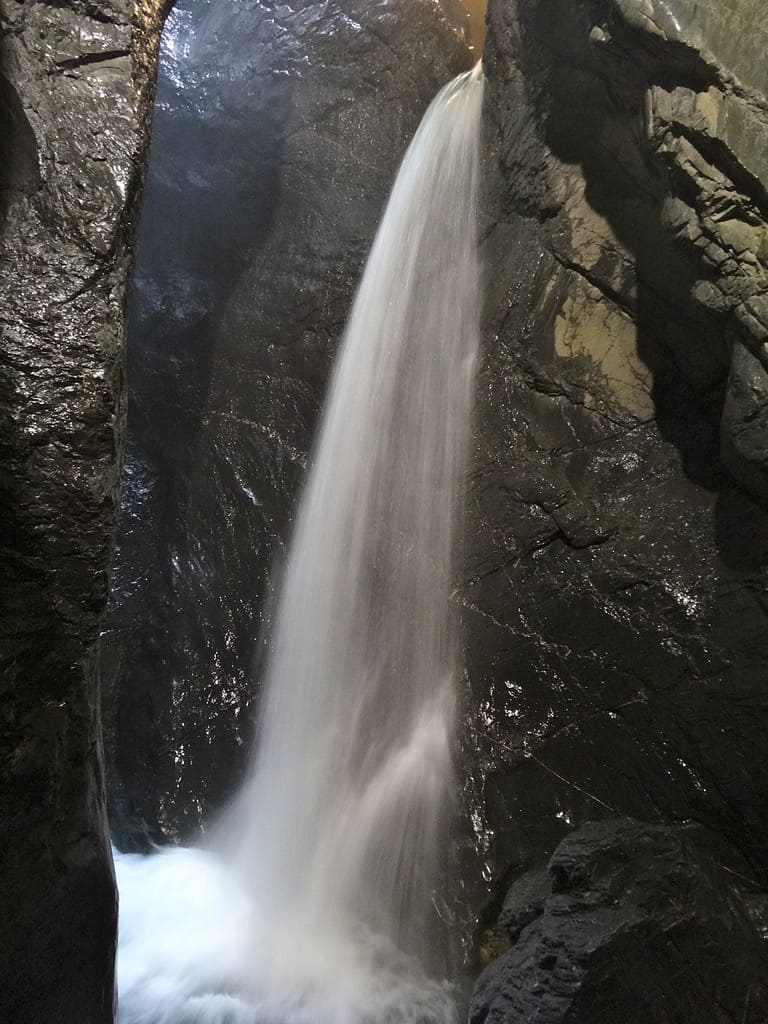 And outside, on the way down to the lower cascades, we’ll have this pleasing panorama of the valley: 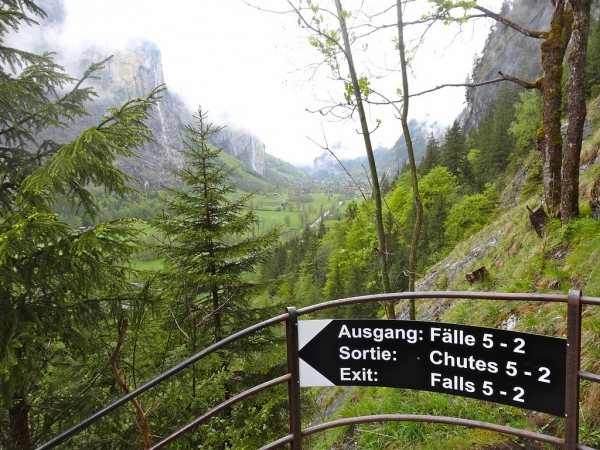 10 waterfalls comprise the Trümmelbach Falls, then there’s another 62 in the valley outside. And people go through them in different ways, like this guy, who makes eggs and tomatoes for breakfast, then puts on wings and flies! There’s no doubt this is one deranged dude. And yet… why can’t I stop looking at it?

Maniacs aside, Lauterbrunnen is Mother Nature at her most awe-inspiring, inside the mountain and out. I was impressed. You will be, too. So was Baudelaire. And Rivendell – that realm of Elves – was probably inspired by Tolkien’s ramblings in these parts in 1911. If you’re a James Bond fiend, you may remember that George Lazenby, the most obscure of the 007s, was involved in a wild car chase here, as well as skiing down the mountain.

[I] entered upon a range of scenes beyond all description or previous conception; passed a rock bearing an inscription; two brothers, one murdered the other; just the place for it.

George Gordon Byron, on seeing these mountains. He goes on:

On one side, our view comprised the Jungfrau, with all her glaciers; then the Dent d’Argent shining like truth; then the Little Giant; and the Great Giant and last, not least, the Wetterhorn… On the other, the clouds rose from the opposite valley, curling up perpendicular precipices like the foam of the ocean of hell during a spring tide.

Back at the little railway station, we’ll catch the train to Kleine Scheidegg, 42 minutes away. After that, it’s an 11 minute wait, before boarding the Jungfraubahn for the last 35-minute leg. A two-hour journey altogether on narrow-gauge trains.

Two hours, that is, if you don’t count unplanned stops along the route. You knew it was coming, didn’t you? Let’s jump right to the next one.

Just before Kleine Scheidegg is Wengen. Sound familiar? If you’re following the Alpine Skiing World Cup, however peripherally, you’ll have heard of this little village. For nearly 90 years, Wengen has hosted one of the most technically challenging downhill races on the World Cup circuit. The 4.5 km run is also the longest. Skiers reach speeds of 120 km/h. A more understandable level of lunacy. But lunacy, all the same.

Also a shame, really, to whizz past this stunning scenery and not see it. (At least, that will be my excuse for not setting off down these hills at anything approaching that speed.)

Our lazy train journey up the mountain, on the other hand, affords plenty of opportunities to observe jaw-dropping vistas. I spotted this scene through a smudgy train window – and simply couldn’t not get off. 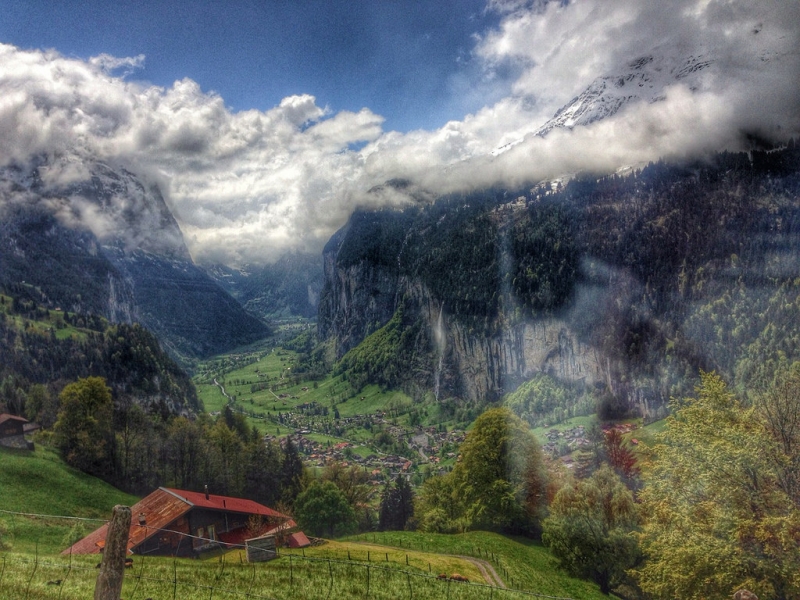 And walking back along the train tracks for a bit, I had this view. All to myself. 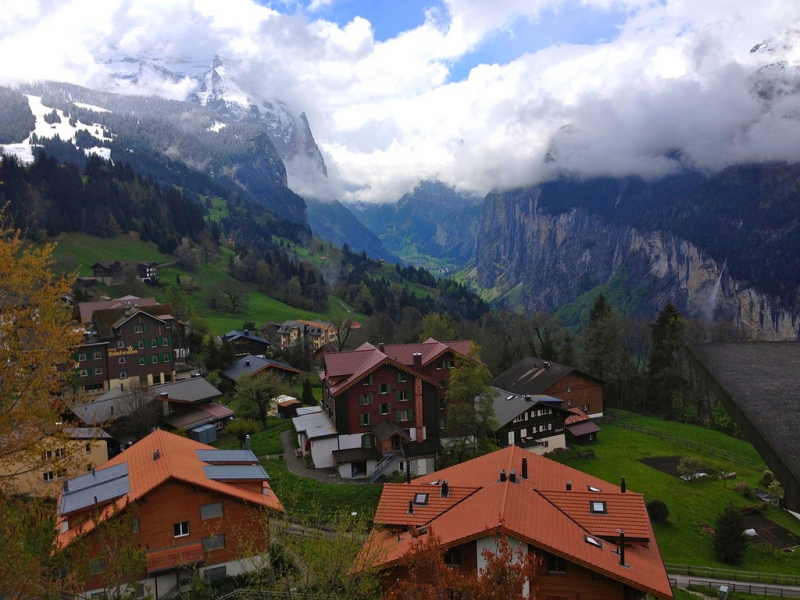 Wengen is car-free. It’s also deserted. I ran into Andreas, who lives here. May is in-between season, he told me. Just the week before, the village was packed with people wanting to get the last bit of skiing in before summer. I know what he means, as I know a fair few of those types myself. Norway is full of people who, contrary to any kind of common sense, are less than happy about the approach of summer. Months before the skis can once again be taken out, prepped. The call of the trails. 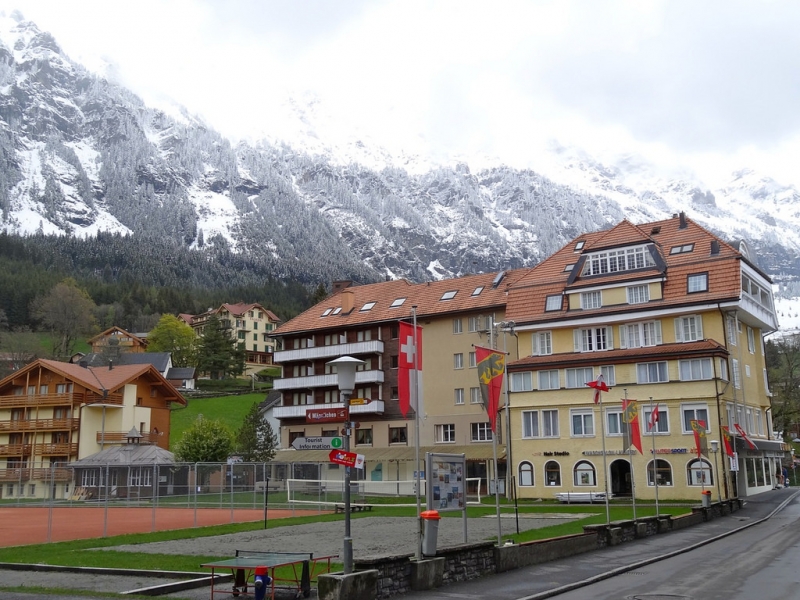 Hard to imagine little Wengen packed on that May day; I was the only one walking through what felt like a ghost town in extraordinarily beautiful surroundings. In a few more weeks, these streets would once again be packed. Summer season.

Meanwhile, local residents were enjoying a few weeks of solitude. Peace and quiet. Fortunately for me, the pub was open. Strudel and beer. A combination that worked surprisingly well. 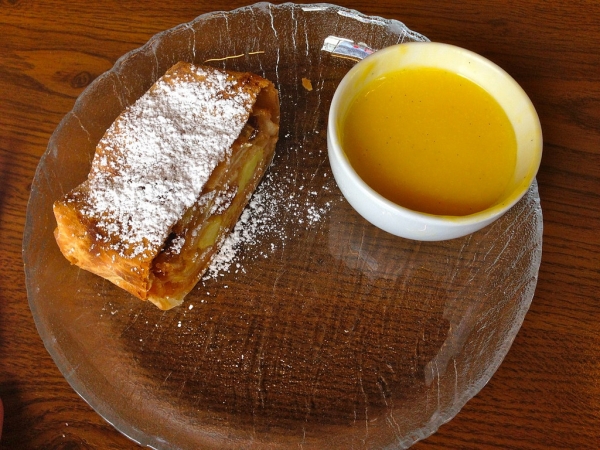 After the little unplanned Wengen stop, I got back on the train to Klein Scheidegg and onwards up into the mountain. From Klein Scheidegg, the quirky Jungfraubahn took me up to 3454 metres above sea level – to the Top of Europe.

Top of Europe? Hm… As the train approached Jungfraujoch station, I wondered. This wasn’t the highest point in Europe. Mont Blanc is. In Western Europe, at least. (At 5642 metres, Mount Elbrus on the Russian – Georgian border is actually the highest. But there never seems to be agreement on whether the Caucasus is in Europe or Asia.) Furthermore, if the Top of Europe appellation refers to how high you can get without actually climbing, it’s still not the highest. In Zermatt, on the other side of the mountains here, you can reach Klein Matterhorn by aerial tramway. That’s at 3881 metres.

But when I exited the train, all became clear – and much more prosaic than my idle musings.

Top of Europe is a building. Simple as that. With restaurants and exhibitions and Europe’s highest post office. That’s at least something. And the views are of course stunning – overlooking the year-round snow-covered Aletsch Glacier. Also, Jungfraujoch is Europe’s highest railway station. That’s also something.

Sadly, I can’t show you any photos of Top of Europe – or anything further up than Wengen. That’s where my camera ran out of juice. Handily giving me an excuse to come back for another look. And that, sweet thing, is where you and I come in. 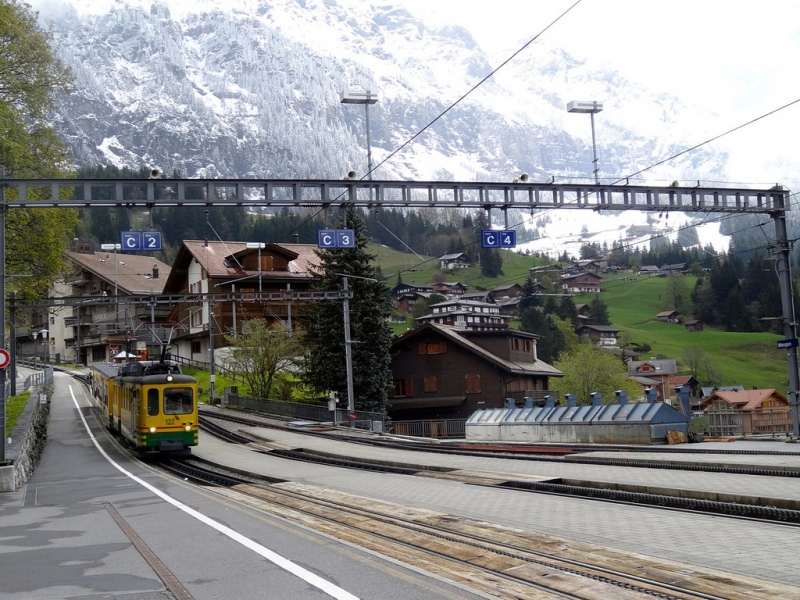 If we choose to go the Grindelwald route rather than through Lauterbrunnen, we’ll also be changing trains at Klein Scheidegg. I’m thinking why not go up one way and down the other… 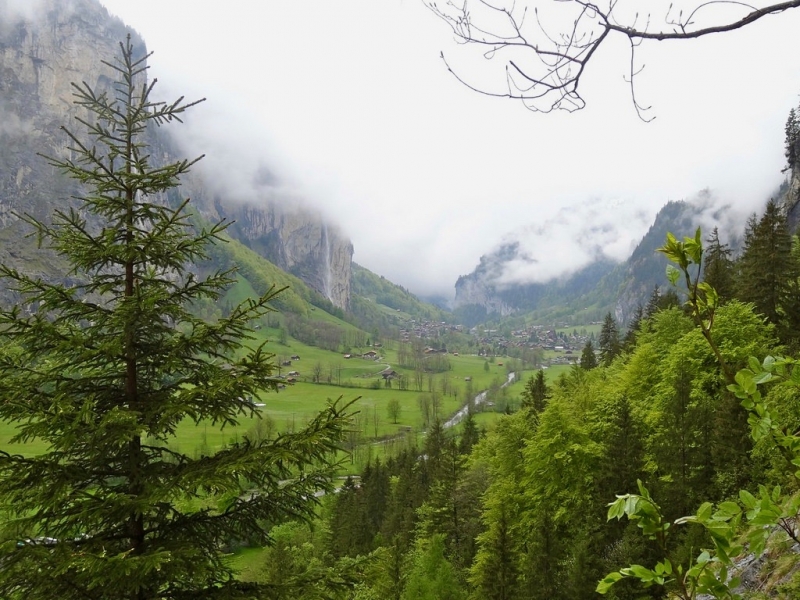 Welcome in Switzerland – in all its four official languages.

(That last one, you ask? Romansch. Spoken by less than 1% of the Swiss population. Still official. I think that’s just very likeable.)