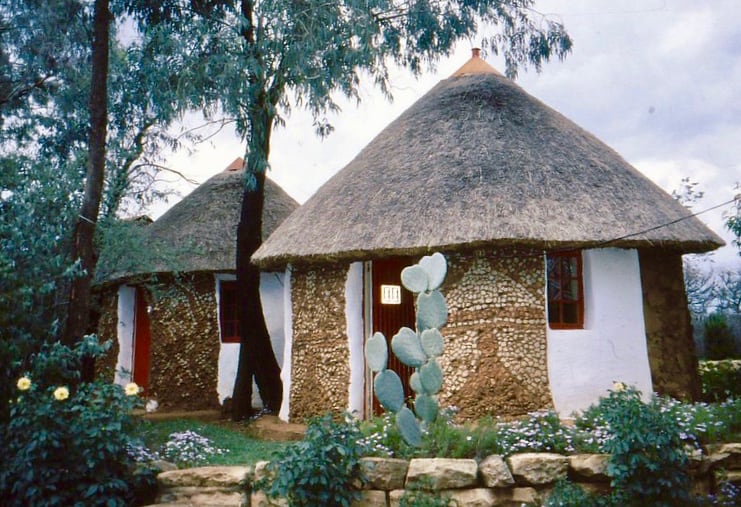 Are you old enough to remember slides, photo transparencies in little frames? I recently bought a clever little slide scanner and am having fun sifting through photos. These are from Lesotho, a tiny mountainous country completely surrounded by South Africa.

I’ve fond memories of Lesotho – and I thought I’d share a little anecdote with you today. It’s an abbreviated version of a story that won me a travel writing competition many years ago, and it was even translated and published in German. Here’s a look back to a sweltering hot day in 1998:

It’s a hot January day and I’m in a minibus, flying across a Lesotho mountain road, wondering whether the holes in the windscreen are caused by bullets or sizable stones and breakneck speed.

I had just spent a few days in Malealea riding in the mountains on a lovely Basotho mare, experiencing nature and all that. Nice as that was, though, a couple of days of peace and quiet was enough. Just a girl and her horse gets lonely after a while, so I returned the little beauty (somewhat reluctantly) and took off towards Maseru Bridge and the Lesotho – South Africa border.

Lugging my backpack down to the main road junction at Motsekuoa, a fair distance in the midday sun, I look for a mini bus. I’ve been told they pass by all the time.

Not a bus is in sight. I sit on my pack and wait. And wait.

Soon, I’m joined by a girl and a boy, both 4 – 5 years old. The girl carries a little baby tied to her back. The boy asks my name. “Sophie, Sophie, Sophie”, he then says. Adorable at first. After 100 repetitions, less so.

As I sit there waiting, I ponder the friendly, trusting Basotho people.

On my way up to Malealea a few days earlier, the bus from Mafiteng was packed to the brim, but the driver wasn’t leaving until the tiniest little crevice was filled. Peddlers passed goods through the windows: sausages, Polish vodka, barbed wire, 10 kg bags of biscuits, brightly coloured Basotho blankets, jewellery, eggs. Money was passed back through several hands. It didn’t seem to occur to anyone that someone along the way might pocket a maloti or two. Peddlers even ran after the bus to return change. 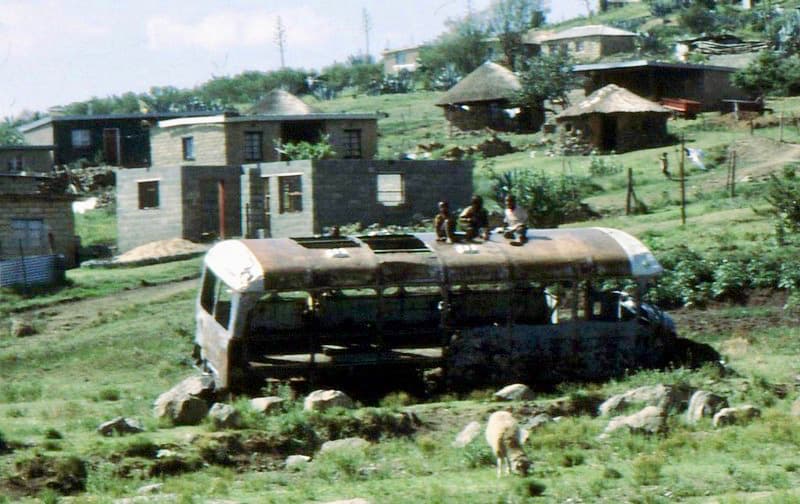 Meanwhile, I’m still at Motsekuoa, waiting for a bus. Occasionally, a car comes by, offering a lift to Malealea. Wrong direction. Apart from that, I don’t see a soul. Hours later, I’m beginning to wonder if I’ve ended up in a twilight zone.

By now, I’m also developing a serious sunburn. The little darlings point at my increasingly red nose and laugh, all the while repeating “Sophie, Sophie, Sophie”. I’m seriously considering a name change, when a bus going in the right direction finally appears.

Lesotho busses often run with a minimum of two people per single seat. Bracing myself for that forced intimacy, I enter – and see to my relief only two other passengers. As we take off towards Maseru, I notice both are cheerful young boys. Very young boys, 14 or 15 perhaps. As is the driver!

I contemplate getting off, when he suddenly spins around and goes the other way.

I repeat the question twice before one of the kid passengers turns around and says… something. My SeSotho vocabulary consists of “greetings sister”, “thank you” and “I don’t have any”, none of which seem appropriate.

He raises his voice and repeats … whatever he said. I realise he isn’t speaking to me at all. Instead, he tells his mate at the wheel to get moving. At least that’s how the driver understands it. I hang on to the door, but to no avail. The door panel soon lands in my lap. Screaming seems the most sensible option.

Even the king wasn’t immune to the hazards of driving in Lesotho. He died driving off a mountain road here some years earlier.

While the driver keeps up his Ayrton Senna impression, I spot a car on our tail. Have these kids pinched the bus or something? Glancing quickly over my shoulder, I see an arm waving something from the passenger side. Something shiny!

I knew those were bullet holes! This was obviously going to be a shoot-out! I could almost hear the told-you-so from friends who said not to go gallivanting on my own in Africa. They should see me now: scared, angry and just a wee bit nauseous.

What if I throw up on the driver, will that make him stop? With those men behind us, do I even want him to stop?

After a while, it occurs to me there isn’t any shooting. As we approach another crossroad, the driver spins around – again – and screeches to a halt. The car behind stops and a man comes out with the shiny thing, which upon closer inspection is a metal box.

As it turns out, he is indeed a bus driver, of legal driving age, who has forgotten his lunch. The man slaps my back, laughs out loud and tells me he’s his father and this whole thing is just a bit of father-son fooling about. They do it all the time; although, he admits, rarely with foreigners in the bus. Yeah, well…