Philadelphia: The crack’d bell and the newborn country (Day out New York) 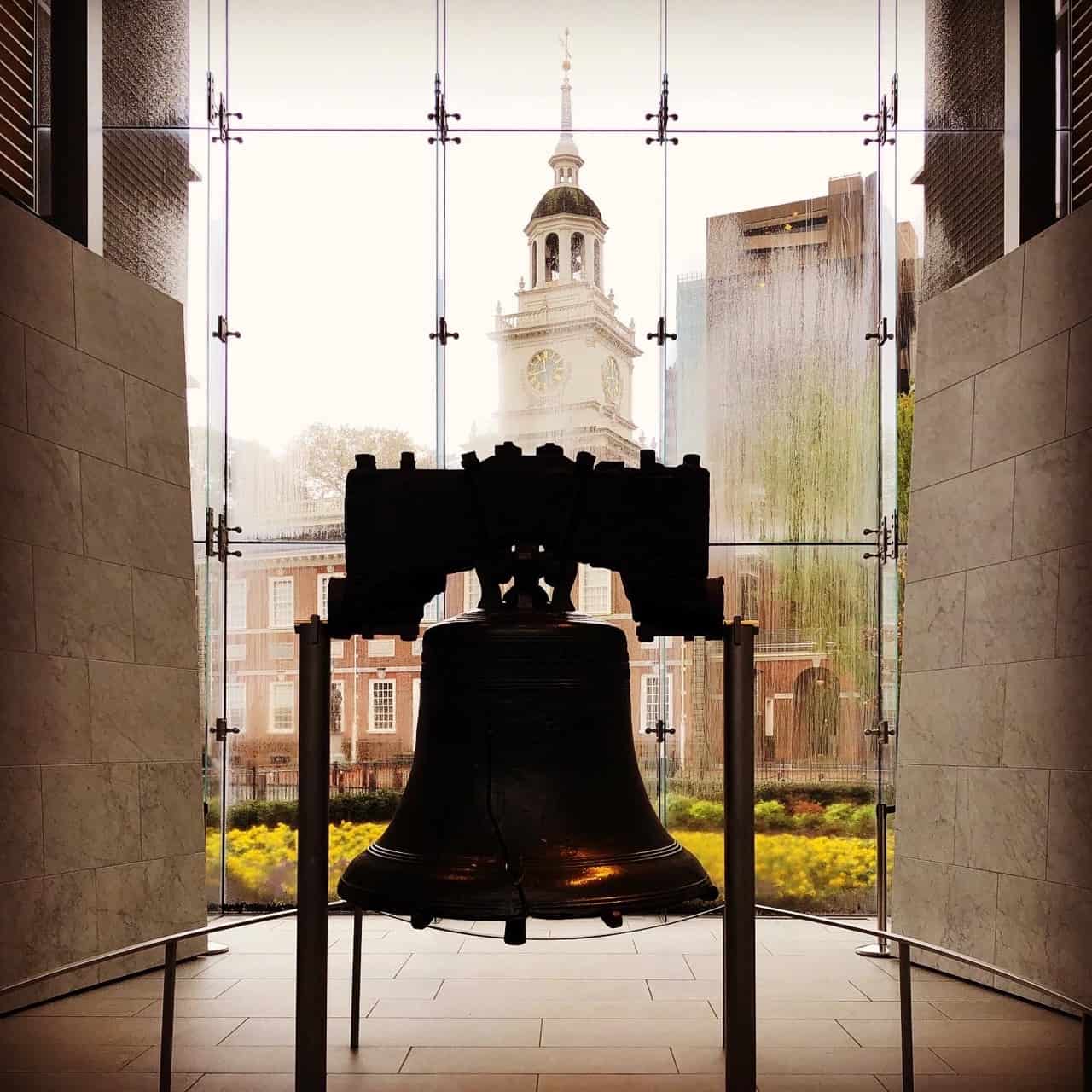 See this bell? We’ll come back to it soon. But first, the building in the background.

Independence Hall: where the US Declaration of Independence was signed, and later, the US Constitution. This building then, is where the first steps towards democracy in the USA were taken. (Of course, a country isn’t democratic when more than half the population is excluded from voting rights. It took a further 145 years to get that sorted.) 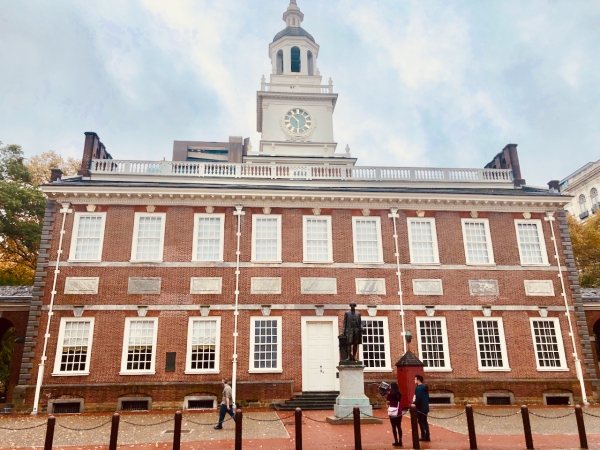 To visit Independence Hall, you must get a ticket from the visitor information centre on Market and 5th, two blocks away. The ticket gets you onto a tour at a designated time slot. And before you ask, yes, you must take a tour, no loitering about on your own here, at least not inside. The tour is free, takes 20 – 30 minutes – and isn’t half bad. Do it.

I’m here on my birthday (how’s that for being dedicated to research!) As it happens, it’s also Halloween, so I get a place on the first available tour, which means a half hour wait. Expect longer waits in high season. On the other hand, you don’t even need a ticket in January and February.

Whilst we wait for the tour to begin, my fellow tourers and I (about 20 of us) are encouraged to pop into an annex to have a look at an original copy of the Declaration of Independence. The silver inkstand made by silversmith Philip Syng and used for signing the declaration, as well as the constitution, is also displayed. Lots of fact stations about, too – well worth a stop and a read, to get a sense of how the country started.

After passing through security (TSA-level screening), we are shown around by a friendly National parks service ranger, who relates the historic events taking place in this building, and tossing in a few interesting anecdotes. He does a decent job of involving us all, without it feeling awkward.

Inside Independence Hall, we’re shown two rooms. First is the old state court house, where the first Supreme Court of the United States met. Can you picture RBG in here? I can. 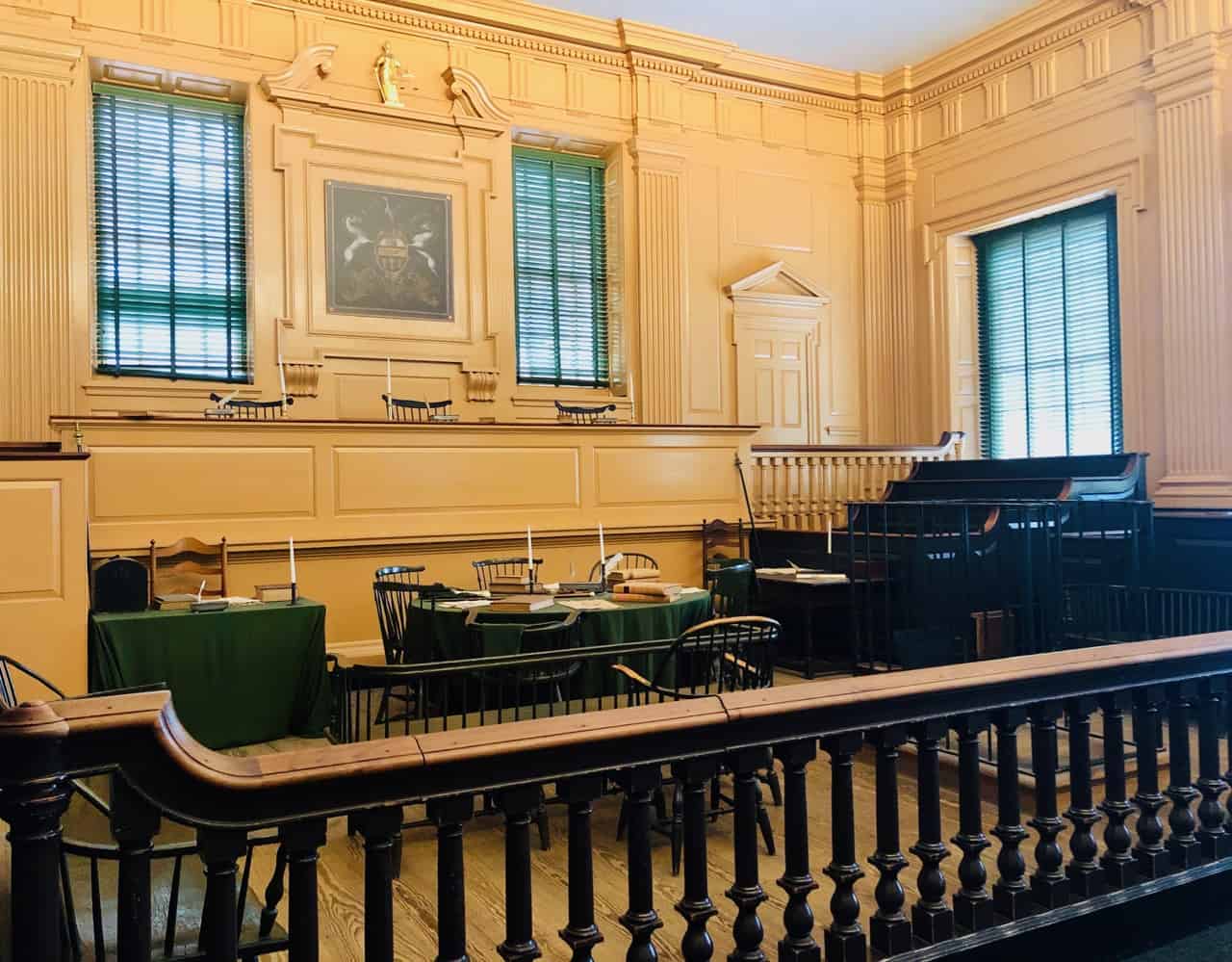 A declaration of independence –

On 4 July 1776, the USA officially declared itself independent of the British Empire, and a union of 13 states was born. This is the room where they all sat, debating: George Washington, Benjamin Franklin, John Adams, Thomas Jefferson, representatives from the states.

(All but three are named by Brits, in honour of Brits. And all, curiously, kept the colonial names. Seems like new names would be significant, symbolically at least. Wonder if that ever came up during the discussions.)

The Assembly Room is mostly recreated; the original furniture was burnt during the American Revolution, but they have gone to great lengths to be faithful to the originals, we hear. For some of the Americans on the tour – which I think is everyone but me – being in this room seems to be a near-religious experience.

However, it wasn’t long before there was trouble in paradise. Conflicts between the states increased, they even engaged in small scale trade wars against each other. There wasn’t really any governmental structure; national authority was lacking. There was no president, and no judiciary. The American experiment was about to fail.

A more perfect union was needed. 11 years after the year of independence, George & Co got together in Philadelphia once again, this time to create a constitution that all 13 states could agree on. What a challenge!

Working out the constitution took four months – from 25 May to 17 September 1787. They co-operated. They compromised. They got ‘er done. Except… 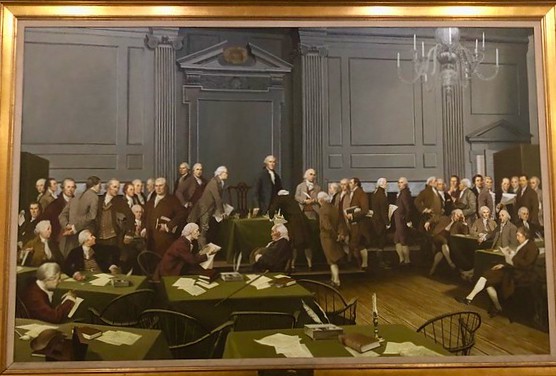 Another compromise was more difficult. The park ranger goes on:

Keep in mind they had just gotten rid of a king. They didn’t want a strong central government. But they never solved the problem. Today, it’s still a problem. A big one. Only today, it’s called states’ rights. Will it ever be solved?

Yet another compromise was less savoury – and not nearly enough. 233 years and one brutal war later, that issue is still contentious.

…because they did next to nothing, they left it for their grandchildren, to fight America’s bloodiest war ever.

By the spring of 1787, all the northern states but one, had either gotten rid of, or were in the process of getting rid of, slavery. The southern states demanded slaves. They believed that without slavery, their agricultural economies would simply collapse.

They wound up doing next to nothing: limiting the import of new slaves after 1808 and – I’m sure you’ve probably heard of the 3/5ths rule… how can a person be three fifths of a person? Makes no sense! …

So, because they did next to nothing, they left it for their grandchildren, to fight America’s bloodiest war ever. More Americans died in the American Civil War than all of America’s other wars combined. And for every man dead, there were four injured. 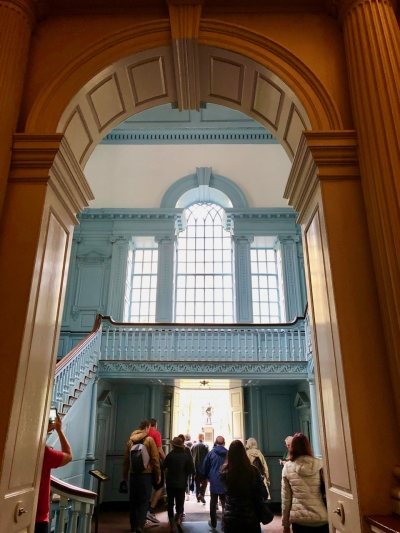 Standing by the stairway here, I search on my phone. This is how Encyclopaedia Britannica describes it:

compromise agreement between delegates from the Northern and the Southern states at the United States Constitutional Convention (1787) that three-fifths of the slave population would be counted for determining direct taxation and representation in the House of Representatives.

Many of the Founding Fathers acknowledged that slavery violated the ideal of liberty that was so central to the American Revolution, but, because they were committed to the sanctity of private property rights, the principles of limited government, and the pursuit of intersectional harmony, they were unable to take bold action against slavery. Moreover, the Southern Founders’ thoroughgoing embrace of slave-based agriculture and their deeply ingrained racial prejudice solidified the barriers against emancipation. That the Continental Congress removed Thomas Jefferson’s statement regarding the injustice of the slave trade (and, by implication, slavery) from the final version of the Declaration of Independence is emblematic of the Founders’ resolve to subordinate the controversial issue of slavery to the larger goal of securing the unity and independence of the United States.

…because they did next to nothing, they left it for their grandchildren, to fight America’s bloodiest war ever.

As I walk out the door of Independence Hall, I ponder the fact that, despite having had US history for a year in an American high school – and again, as a required course at an American uni, I’ve never before heard of the 3/5ths rule! But, like the park ranger’s assumption above: “I’m sure you’ve probably heard of the 3/5ths rule…” I’m going to assume, along with him, that most Americans know about this. Or, at least, I hope they do. 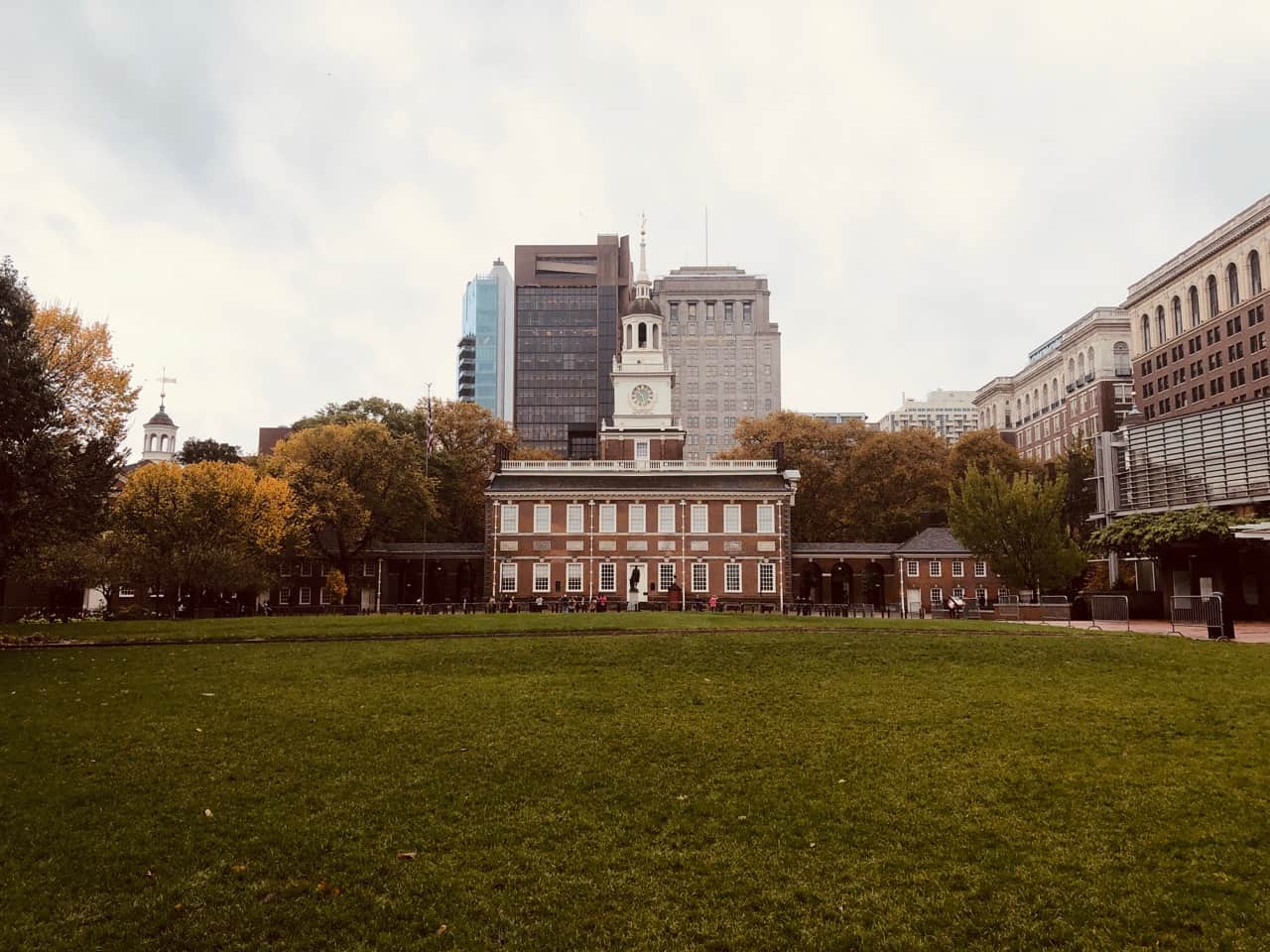 Seems almost minuscule, doesn’t it, against a backdrop of 20th and 21st century skyscrapers. It would have been interesting to see this building on its own in the landscape here. Probably an impressive site in 1753, when it was built. Independence Hall is interesting and well worth a visit. However, I admit to being more taken with the exhibits in the little building across the street, the one on the far right in the photo here.

What weighs 943 kg, contains arsenic, gold and silver and is cracked?

This baby, that’s what. 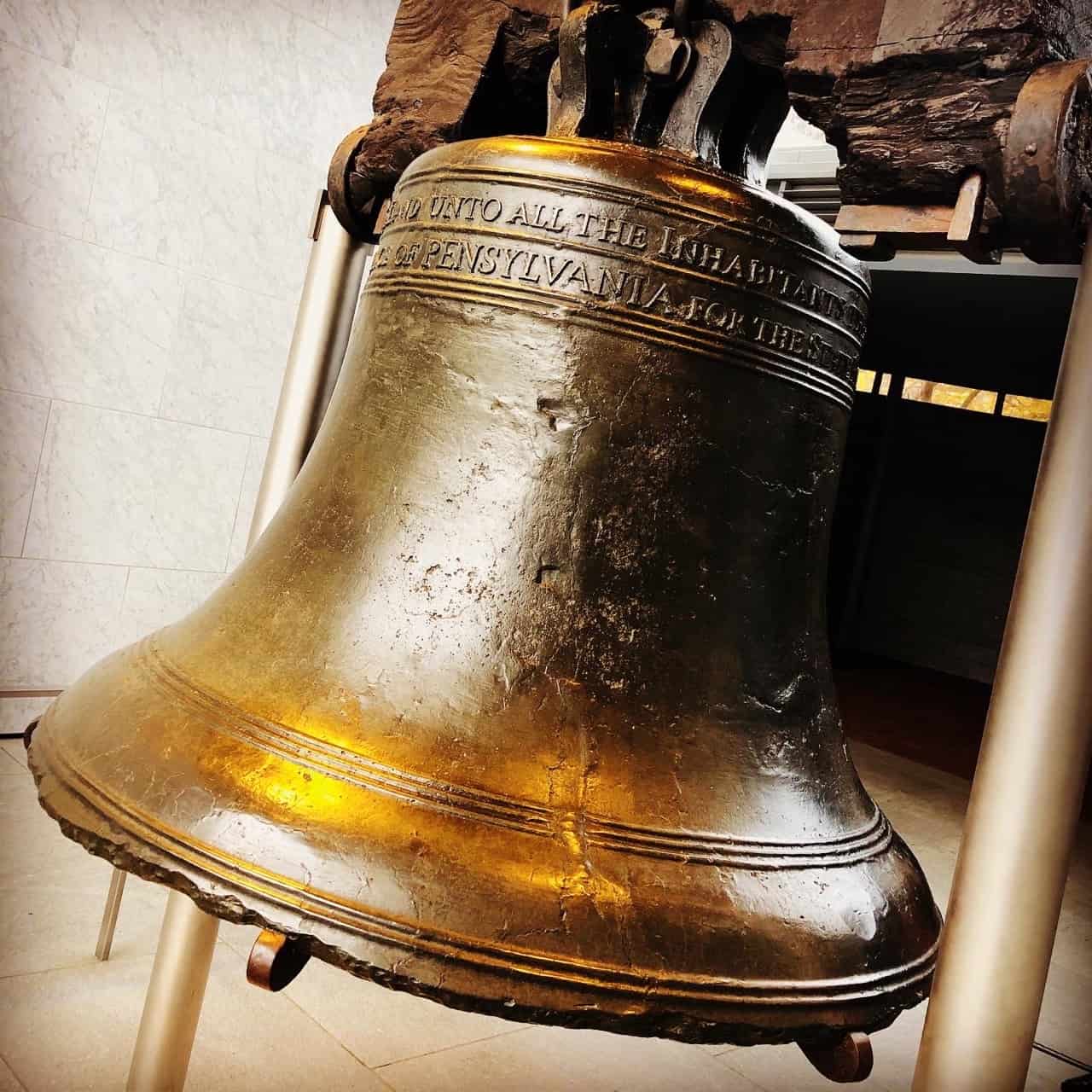 When you’re visiting Independence Hall, I suggest you add an extra half hour or so, to have a look at the famous, fragile Liberty Bell. As you can tell from the top photo, it’s just a stone’s throw away. I spent nearly an hour here, and felt this little museum was more relevant – or more hopeful, at least – than the old building.

I’ll admit that headline here is a trick question. Fact is, the bell is made of 70% copper, 25% tin, and the tiny remaining fraction comprises the above elements, as well as zinc and lead. Not a very sustainable mix of metal, it turned out. Too brittle. Made in London, the original bell cracked soon after arriving in Philadelphia.

In 1753, local craftsmen used the metal to cast a new one. It was originally known as the State House Bell (the original name of Independence Hall was The Pennsylvania State House), and rang often for announcements and proclamations. Most famously, it rang to announce the first public reading of the Declaration of Independence on 8 July 1776.

70 years later, it cracked again, this time for good. Its very last ring was on 23 February 1846, to celebrate George Washington’s birthday. Since then the bell has been silent.

Did you notice the inscription on the bell?

Proclaim liberty throughout all the land unto all the inhabitants thereof

Since those words were inscribed on the bell back in the mid-1700s, they have taken on new significance, as various marginalised groups have fought for their liberty.

The first to adopt those words for their cause, was an anti-slavery group in the 1830s. These abolitionists were also the first to call it Liberty Bell.

When you’re in this little museum, be sure to have a look at the exhibitions before heading to the bell; reminders of people protesting inequality in all its cruel forms.

As I wander along, I read about the anti-slavery movement that had its home in Philadelphia. Further on, I learn about the Women’s Liberty Bell (also known as the Justice Bell), created in 1915 to promote women’s suffrage. I see a black and white photo from 1965, showing LGBT activists marching for equality across from Independence Hall, risking career loss and harassment.

I’d say this crack’d bell has done a good job. 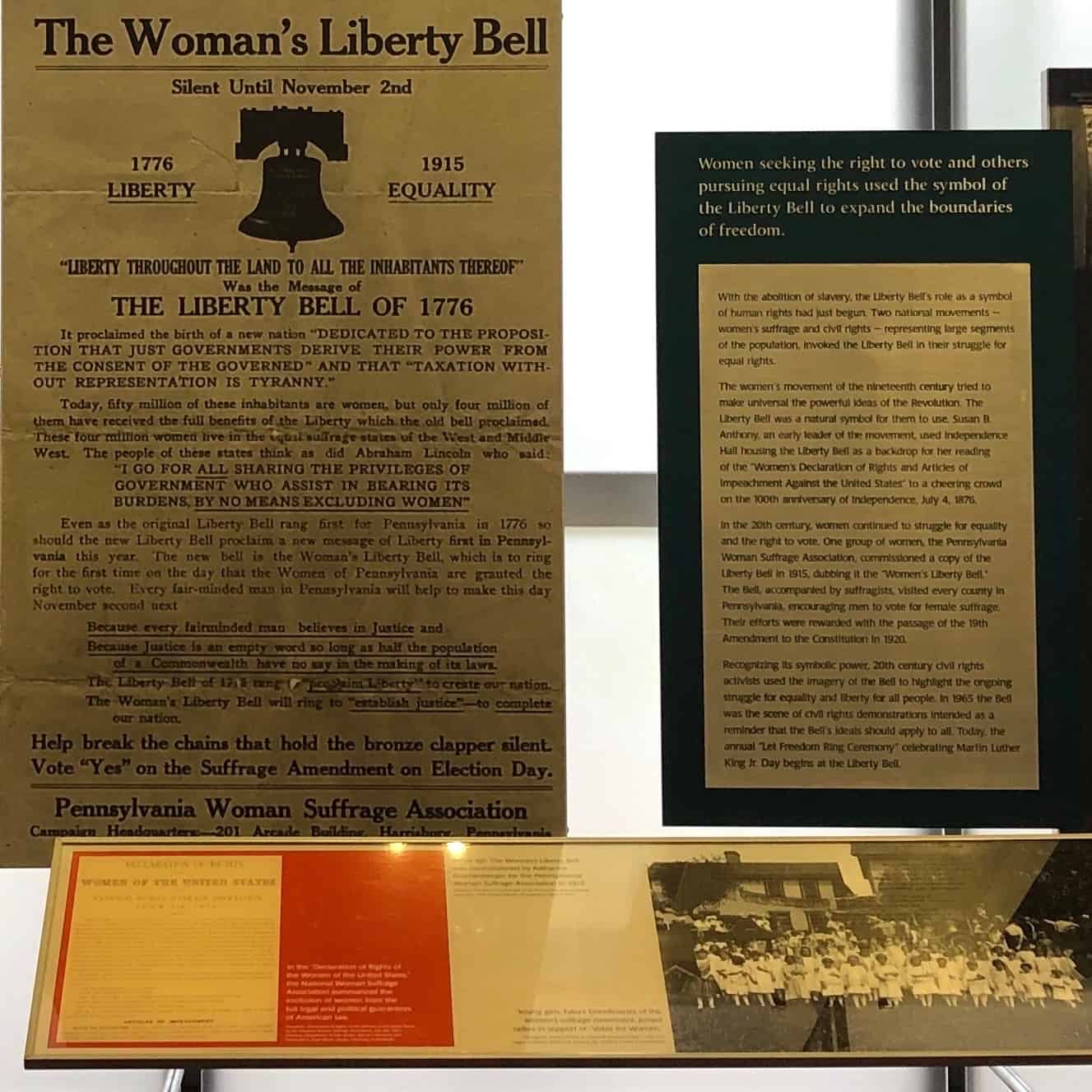 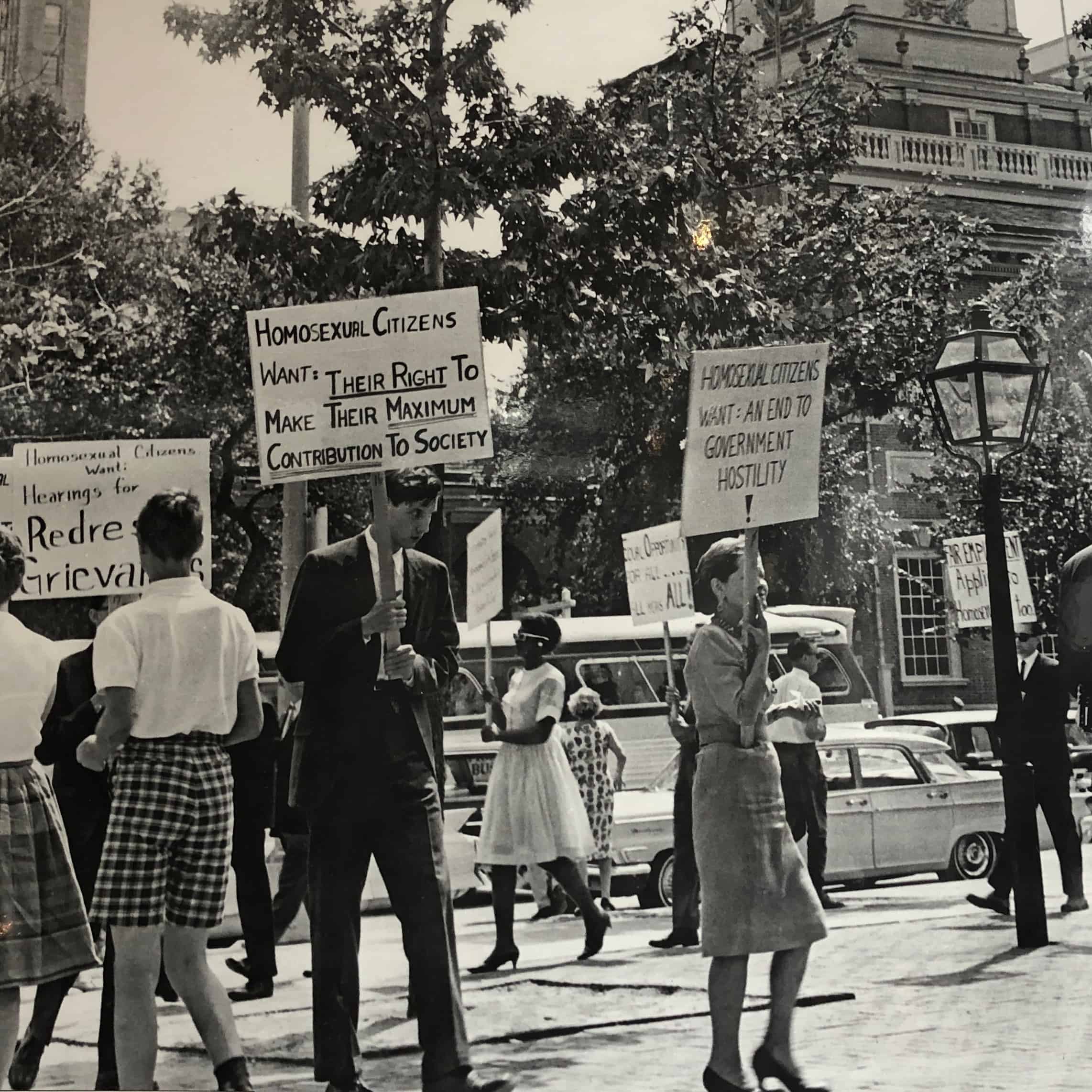 The area houses about 20 other historic buildings as well, including the home of Betsy Ross (who sewed the first stars and stripes flag), The President’s House (Philly was the first capital, remember), the First bank of the US (as well as the 2nd), and more. If you have the time and inclination, you can see them all on a 75-minute walking tour. 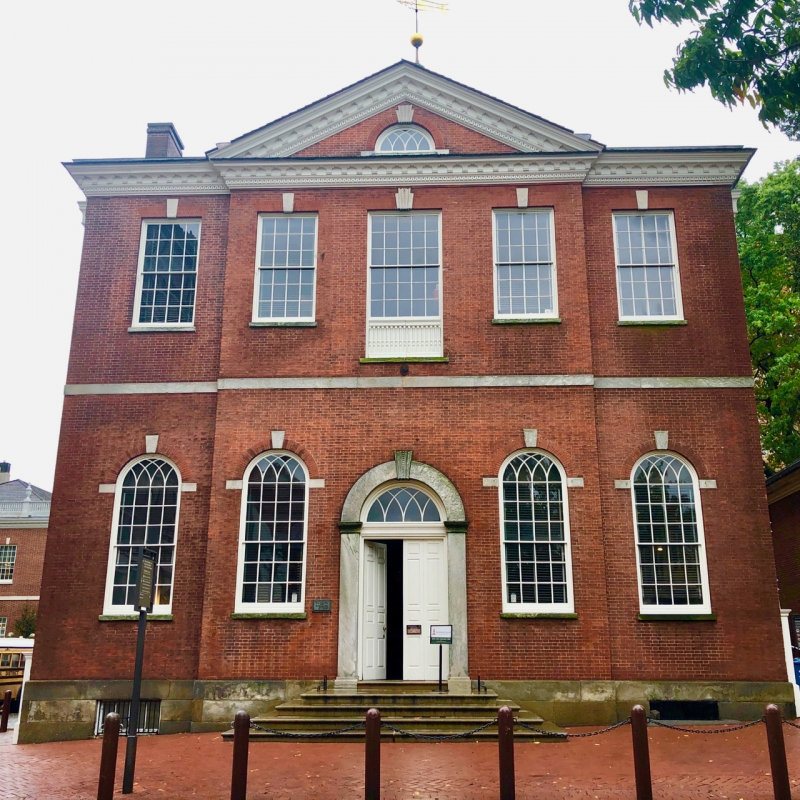 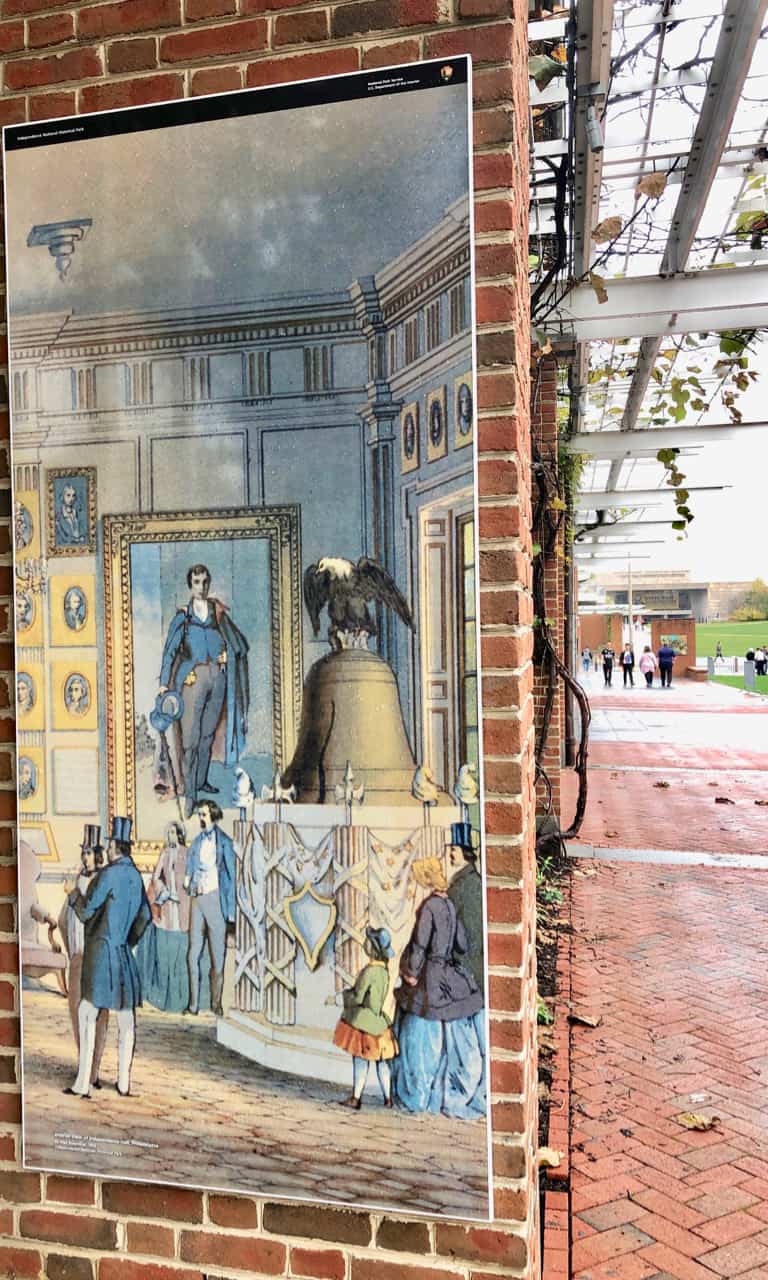 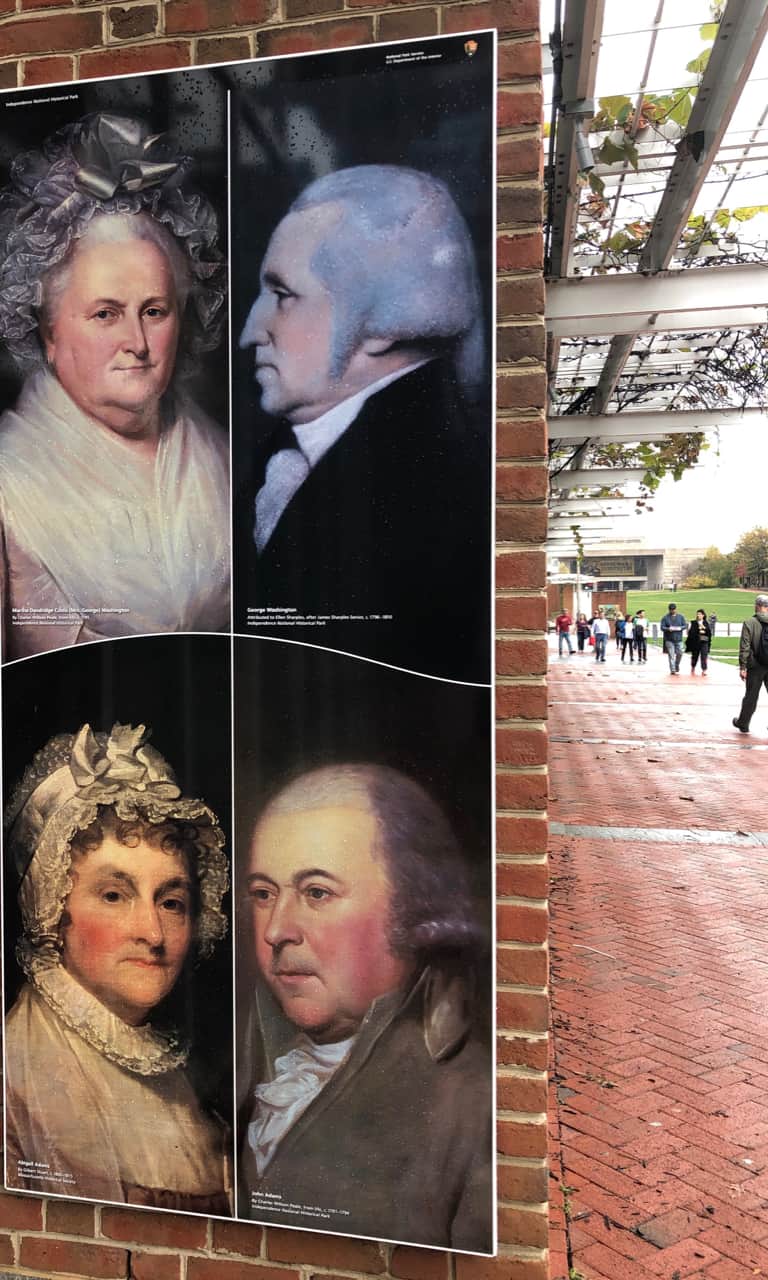 On the left: Painting of Independence Hall, interior view by Max Rosenthal, 1856; On the right: Martha and George (top), and Abigail and John (bottom). Bet you know the surnames.