Alluring Lucerne: 4 hours is but a glimpse (Day out Geneva)

You know how you’ll find articles telling you how to spend 24 hours – or 48 hours or 72 hours – in a given city? Well, this isn’t one of those. This is more of a marathon: 4 hours in Lucerne, a brief glimpse, at best. But 4 hours is better than 0 hours. Way better. What I found, was a genteel and quiet city, not unlike the white swans that drift delicately past on Vierwaldstättersee (Lake Lucerne).

On a recent visit in Geneva, I decided to give my Swiss travel pass a little work-out – and so I left my sparkling colleagues, Ann-Mari and Annette, in Geneva to do what they like best (checking out the food and wine scene), while I hopped on a train for the 3-hour journey to Lucerne. Cause I hadn’t been before. And because of Miss Jemima. 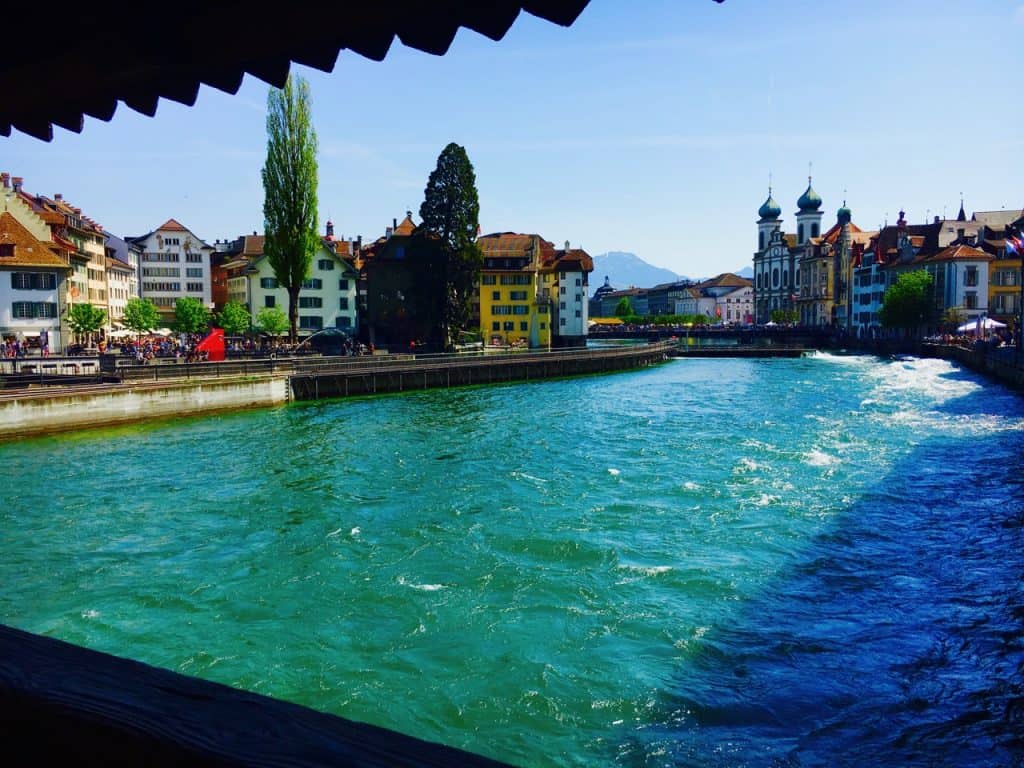 I had wanted to see this city, rumours of its beauty practically mythical, ever since reading about one Miss Jemima Morrell from Selby (a small town south of York), who in 1863, at 21 years of age, went on a group tour to Switzerland. The very first Thomas Cook tour it was. Jemima and her group took trains around the country, sometimes spending as much as 18 hours onboard. Trains without toilets. How, I shudder to think. Additionally, these were steam trains, where, when you opened the windows, the wind might very well blow that steam right in your face. Coal steam. Cough, cough.

Jemima was busy scaling mountains. I’m doing no such thing. Not today, at least. Next time, however, I, just like Jemima, will clamber up Mount Pilatus. However, unlike our brave Yorkshirewoman, I will not be scaling it in a crinoline dress… although that probably would add a whole other interesting dimension to the experience. Hm…

(If scaling isn’t your thing – or you’re just feeling lazy, you can take the cogwheel railway up. Steepest in the world; it’s a 30-minute ride, up a 48 percent gradient.)

Back in the present, I only have sufficient time to look at the mighty Pilatus from down below.

What to do with my 4 unmapped hours then? Other than the story of jetsetting Jemima, I haven’t read up on this sweet Swiss city, and am relatively ignorant of its merits. Apart from stunning nature all round, what does Lucerne have to offer the visitor? Well, the city’s most famous image is Kapellbrücke (Chapel Bridge), the iconic covered wooden bridge. And then there’s the Lion Monument. Let’s begin with those. 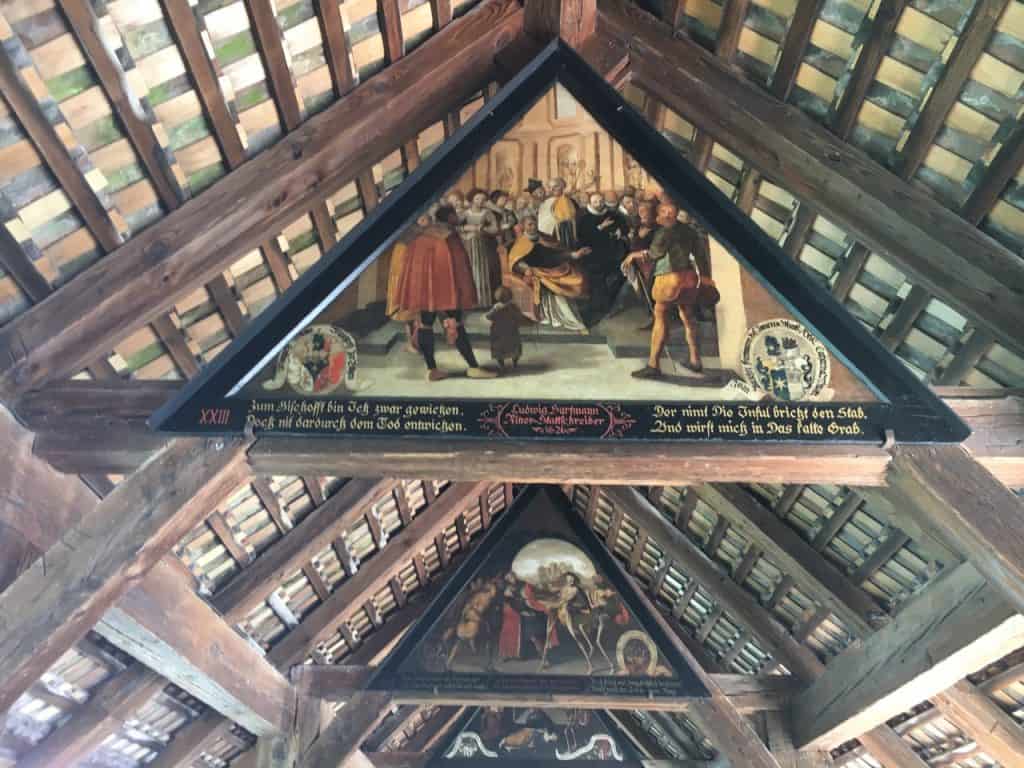 Kapellbrücke, as it turns out, is practically on the doorstep of the railway station. How lovely it is. And how long! From the 14th century, this footbridge is 207.4 metres long, and crosses near where the fast flowing River Reuss meets the Vierwaldstättersee. But not just across from one side to the other – oh no. The fastest route between two points might very well be a straight line – but Kapellbrücke doesn’t care. Instead, Europe’s oldest covered wooden bridge bends, then angles sharply past the Wasserturm (water tower). 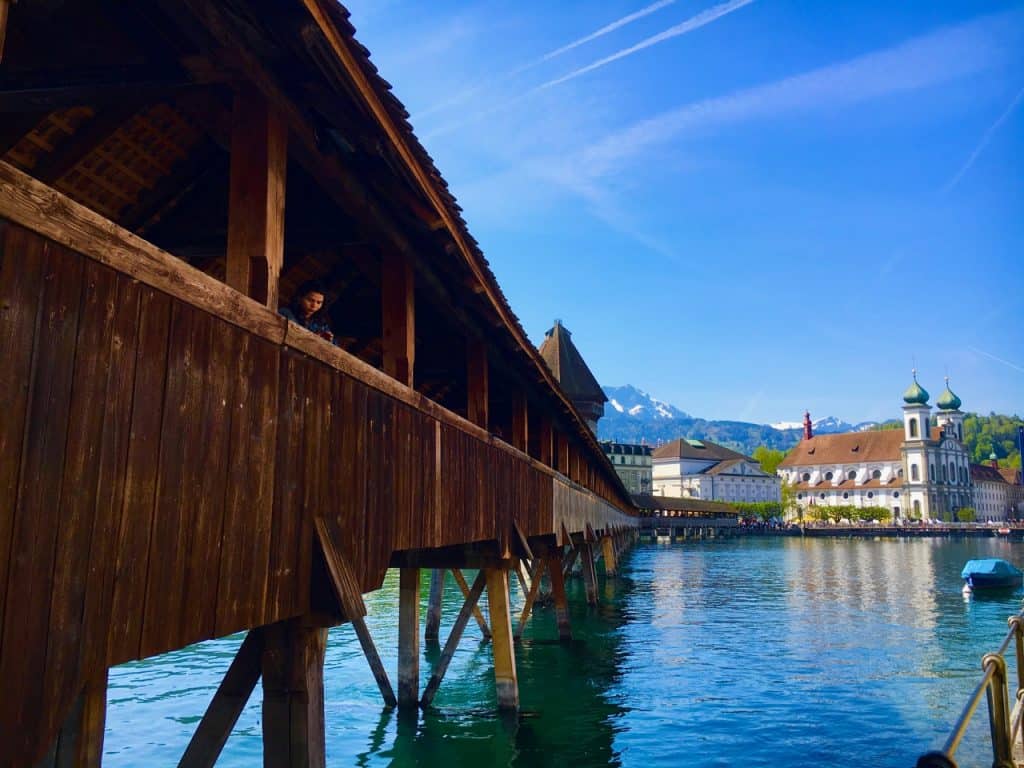 The octagonal Wasserturm is from 1300, and is so much more than a water tower. This interesting 34-metre high stone building has had many identities over the centuries: torture chamber, prison, treasury, archive, watch tower, gift shop… you get the idea. 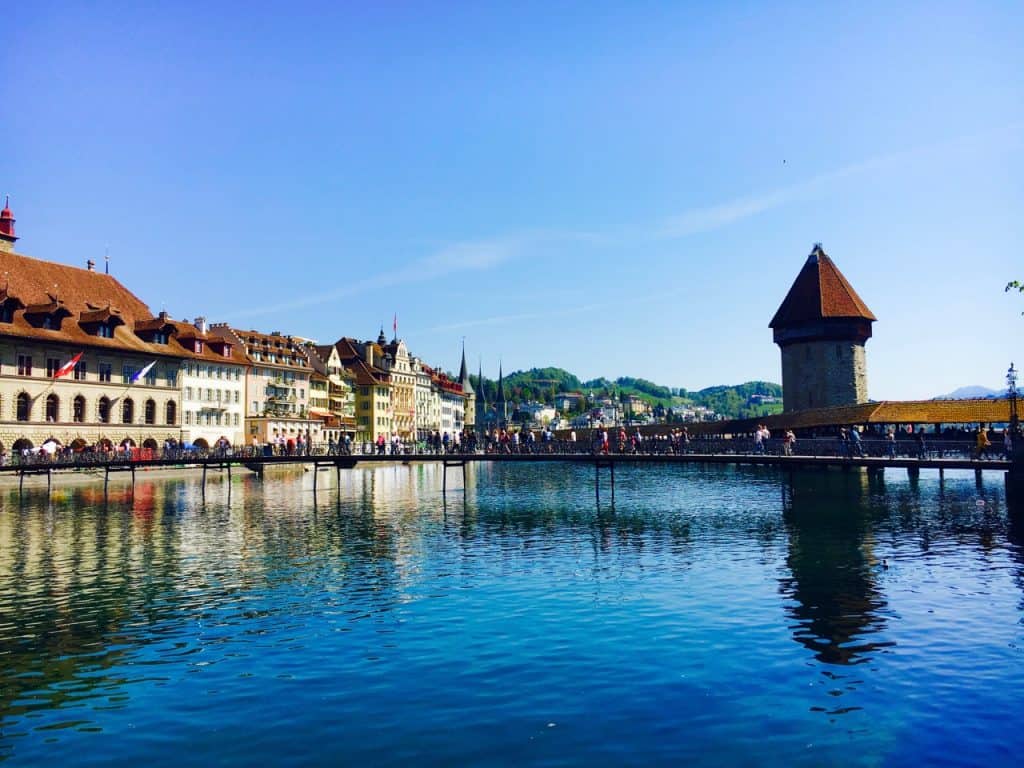 As you cross this bridge, you cannot help but look up. Walk slowly through, as you look at the medieval paintings spread out under the eaves, evenly distributed, with Swiss precision. 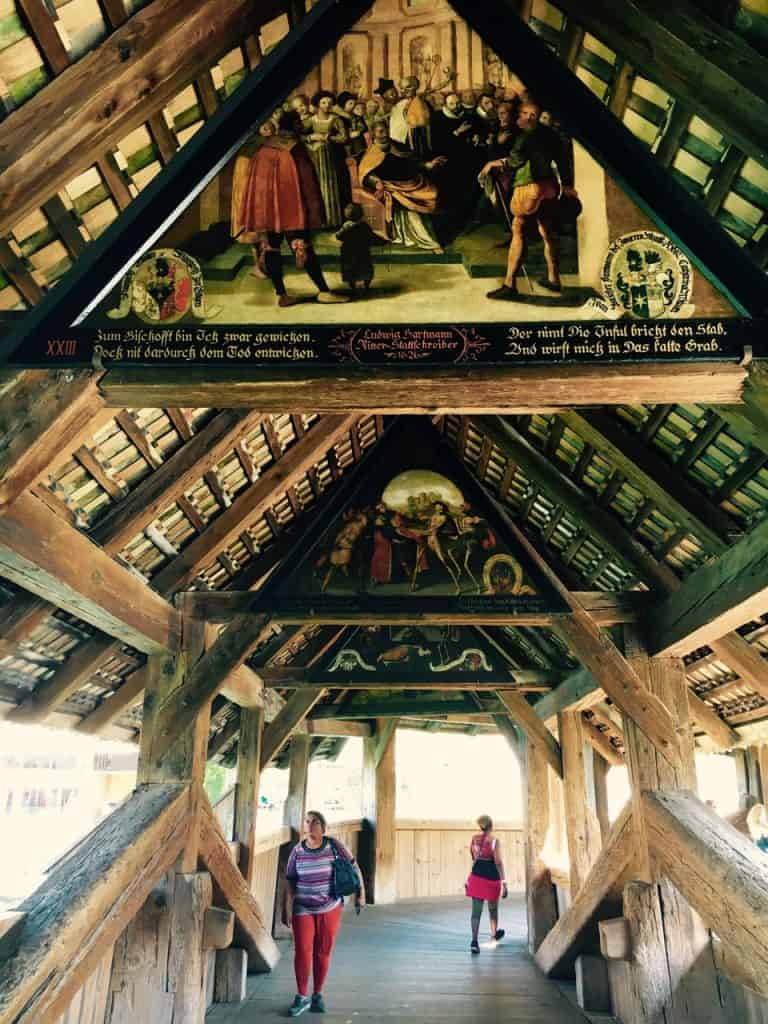 The triangular paintings recount Switzerland’s and Lucerne’s history. I see battles being fought, banners being raised, great fires.. and realise I would love to have someone tell me about each one. Exiting the bridge at the other side, I happen to turn around, and walk right back on to catch the rest of the story. 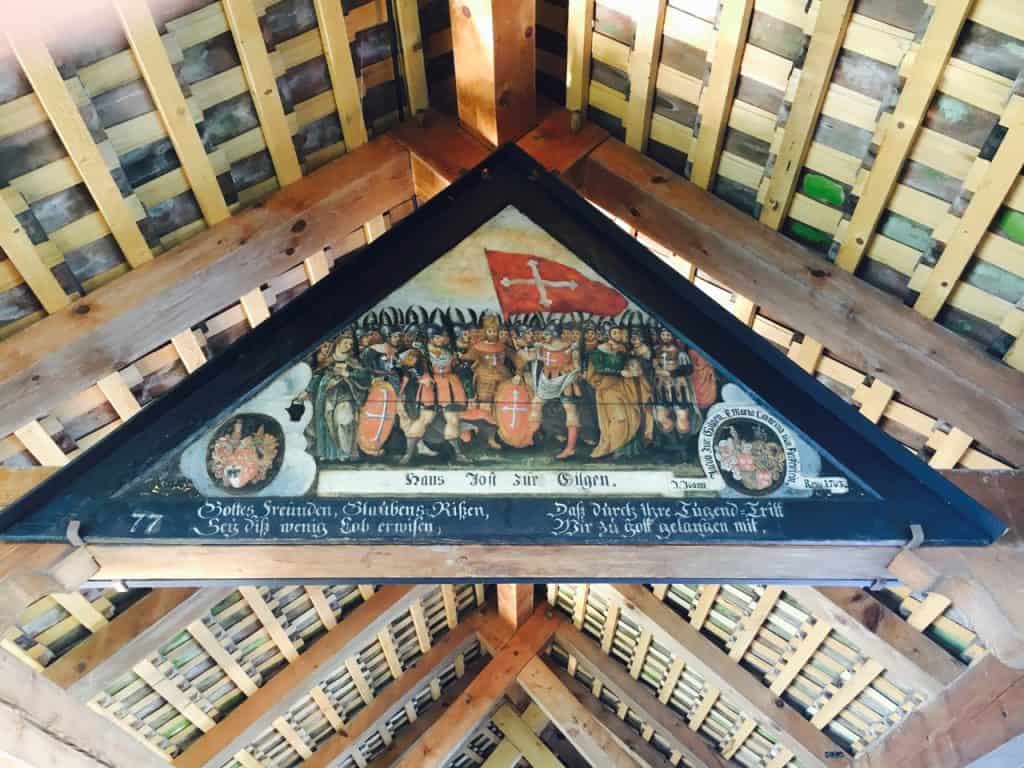 A little further down river is Spreuerbrücke. From the early 15th century, this is another of Lucerne’s covered wooden footbridges. Spreuerbrücke also features triangular paintings in the awnings, but here’s it’s all about the Totentanz, the death dance, reminding us there is no place where death isn’t present. We’re all at its mercy, Gaspard Meglinger must have thought, as he painted: women and men, priests and paupers, lawyers and artisans. And all the while, the grim reaper smiles ironically. A Dance Macabre, indeed. 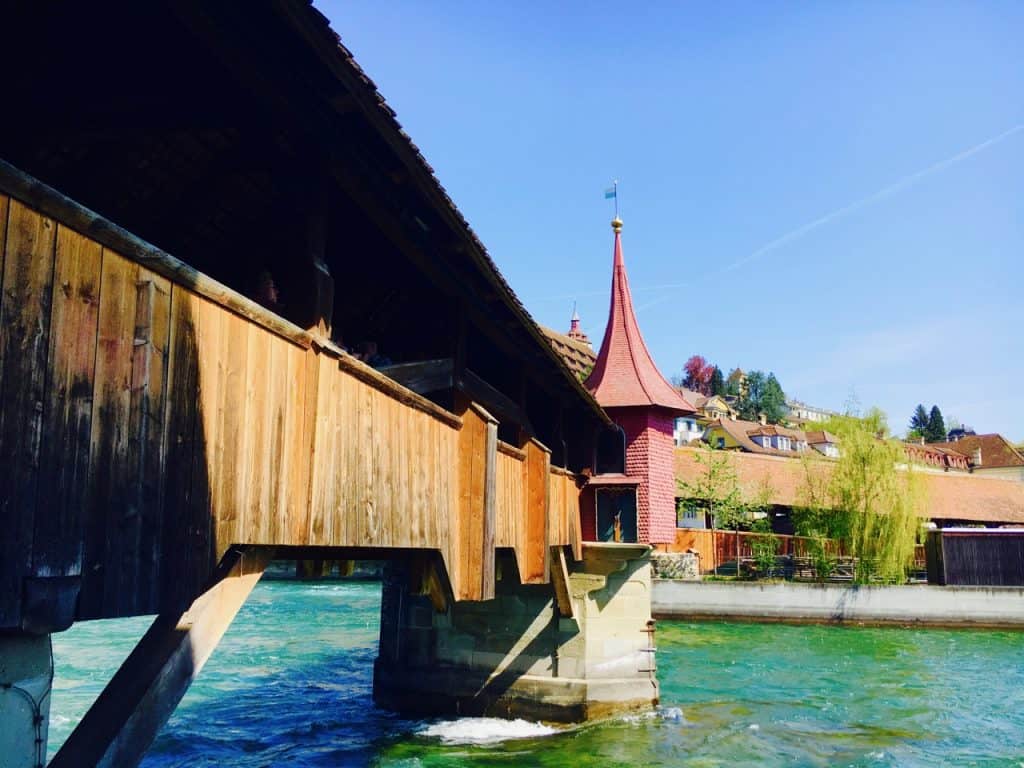 Spreuerbrücke with its pink watch tower 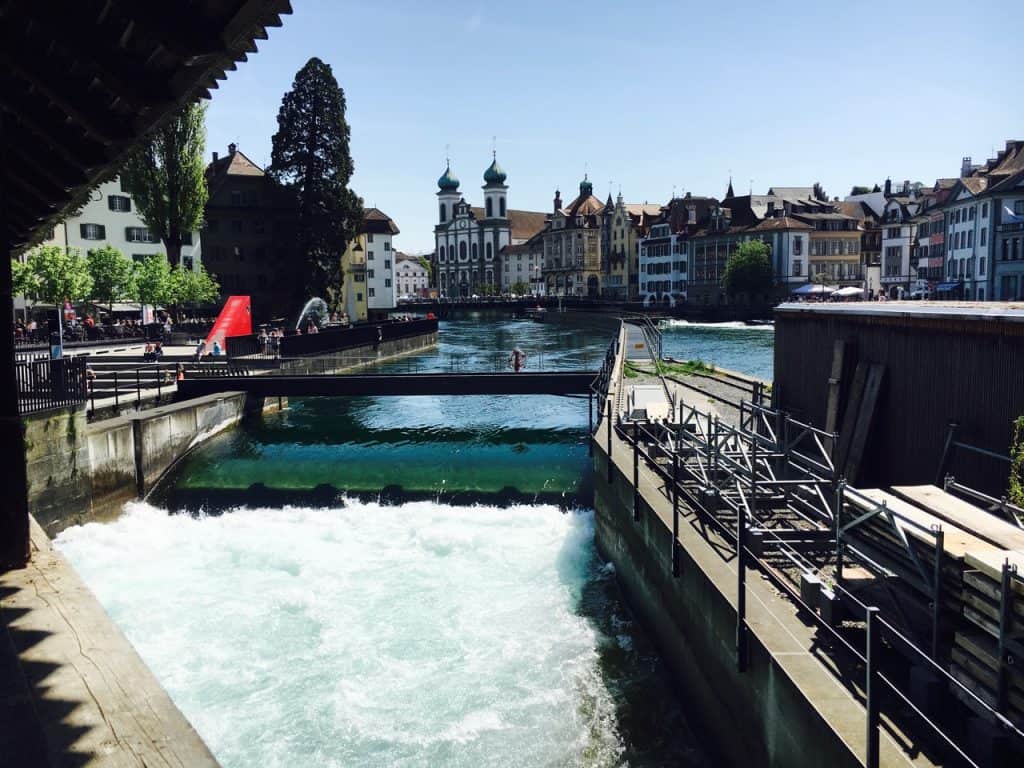 Built in 1860, water spikes are lowered into or heaved from the water manually, to regulate the water level of the River Reuss.

The Dying Lion of Lucerne

Next to Kapellbrücke, the Löwendenkmal (lion monument) is Lucerne’s other iconic landmark – testified by the hordes of people snapping away on this random Saturday in April.

Our friend, Mark Twain, who traipsed about central Europe in the 1870s, called it the most mournful and moving piece of stone in the world. 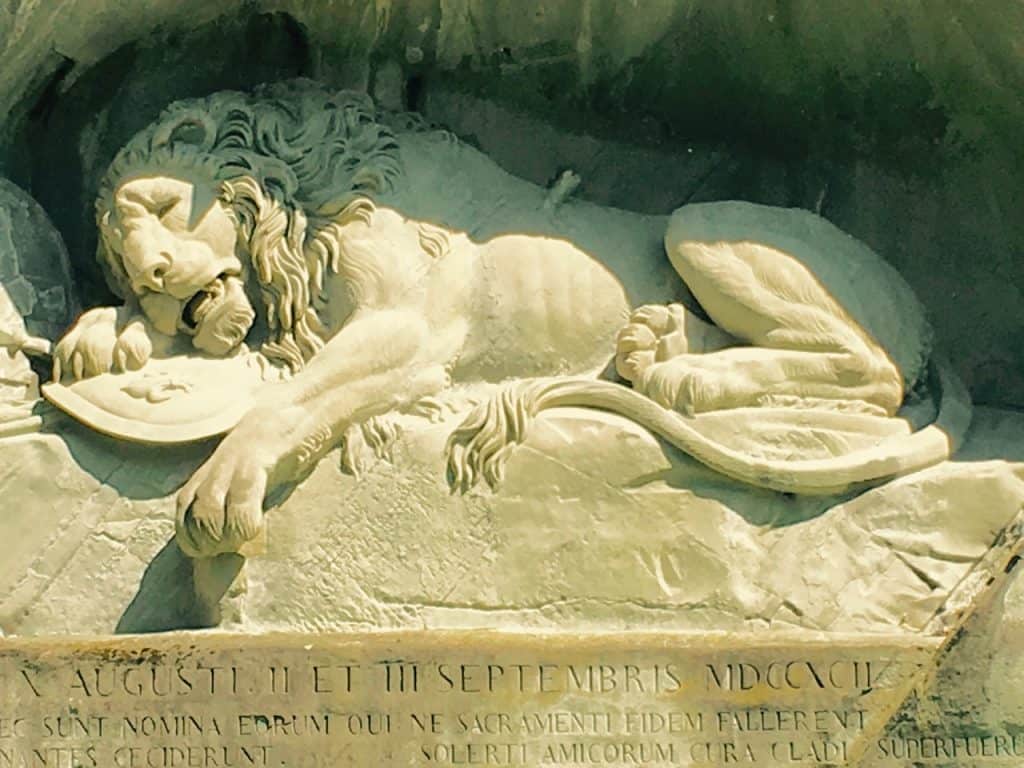 It is indeed a heartbreaking monument. Whisks me right back to childhood, to Narnia, crying over the powerful, yet gentle Aslan, the wise and kind lion, brutally murdered by the White Which.

The enormous dying lion is a monument to mercenary Swiss soldiers who were killed defending Louis XVI and Marie Antoinette during the French Revolution. He is carved entirely out of the cliff face here in a what was once a sand stone quarry. You’ll notice he is pierced by a spear, and that he rests his weary head on a fleur-de-lis shield representing the French monarchy. Next to him is a shield with the Swiss coat of arms. Underneath this poignant memorial are listed the names of the officers, and numbers of dead and surviving soldiers, DCCLX (760) and CCCL (350), respectively. 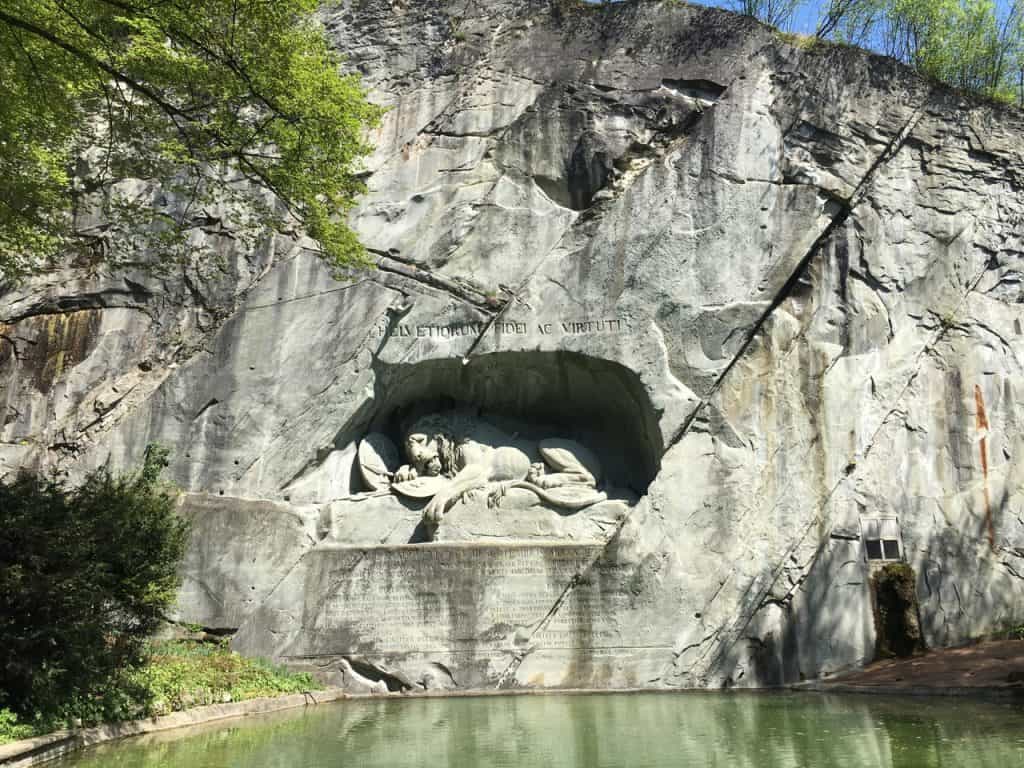 Notice the writing above our forlorn feline? Helvetiorum Fidei ac Virtuti – to the loyalty and bravery of the Swiss.

Karl Pfyffer von Altishofen, an officer of the Guard, was home on leave at the time of the massacre. He wanted to commemorate his fellow officers and took up collections to have this sad, evocative sculpture hewn in 1821.

(If you’ve been in the Oakland Cemetery in Atlanta, Georgia in the USA, you will have seen the lion of Atlanta, and recognise the sad pose. The one in Atlanta is an 1894 copy of this one in Lucerne.) 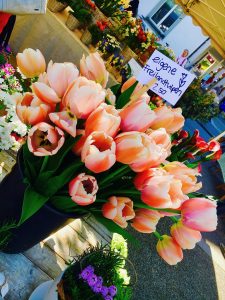 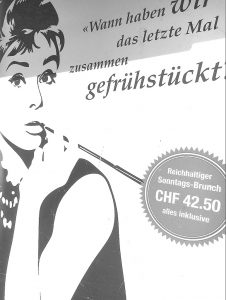 By chance, I happen to be here on a Saturday, which is market day in Lucerne. The stalls are wonderful: I’m offered samples of cheeses and breads and apfel strudel… and wish I could have breakfast with Audrey Hepburn.

As I continue past the market, I notice a sign advertising an exhibit at the Historisches Museum. I pop in for a quick look and learn that Miss Jemima wasn’t the only Victorian who took to Switzerland. Indeed, the most Victorian of all, Victoria herself, spent five weeks in Lucerne in 1868, to recover from the death of her beloved Albert. On 7 August, she notes in her journal:

How much dearest Albert wished I should see Switzerland, how he admired it, & how everything beautiful makes me think of him. 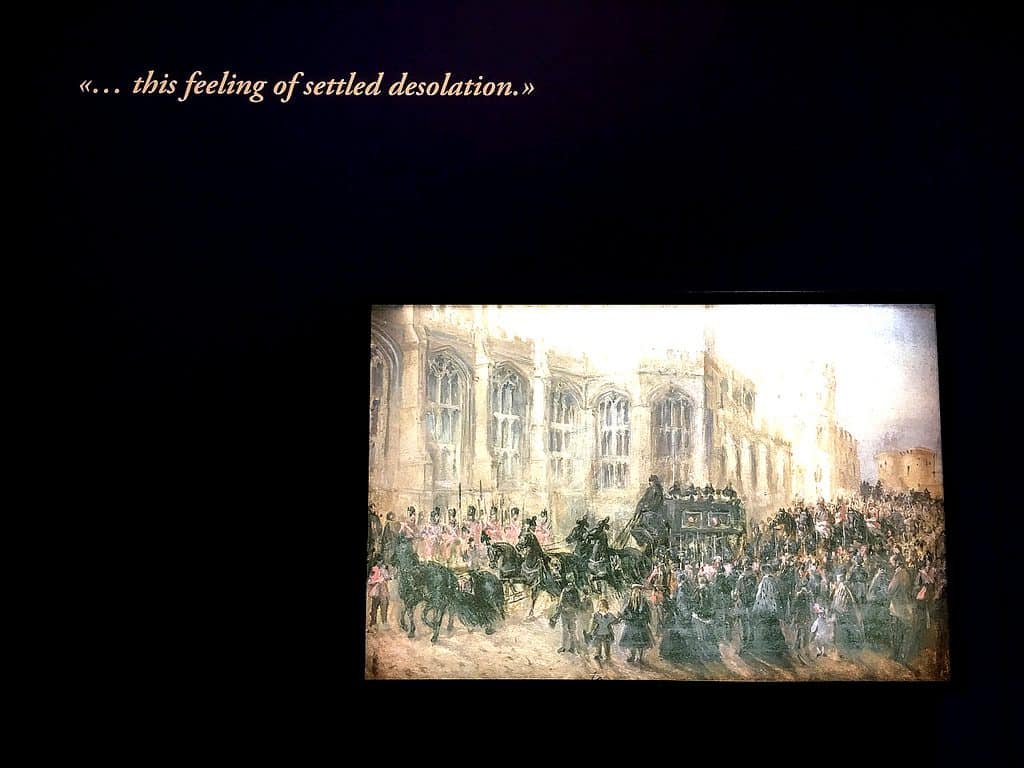 But look: in an entry on 27 August, she is talking about some of her fellow English female travellers – and she’s none too impressed: 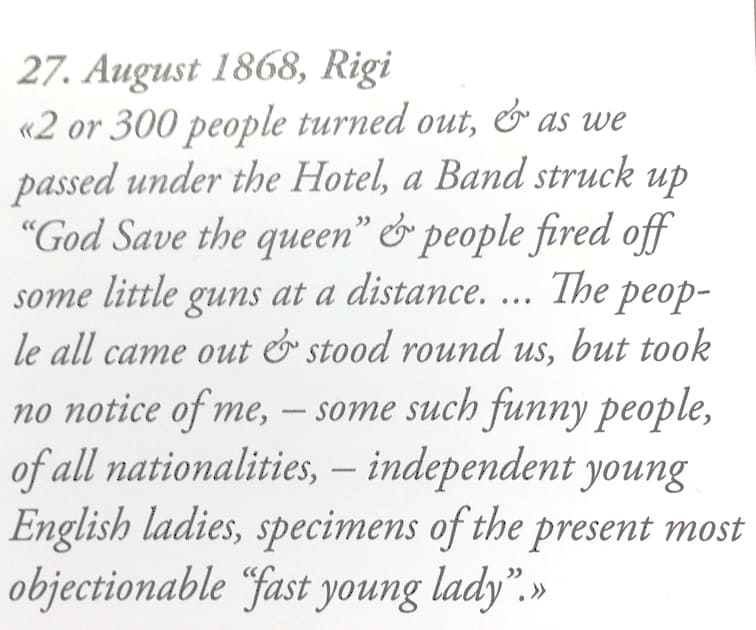 Why, I feel she’s talking about me!

And sure enough, around the corner, I find out more about these objectionable creatures. The term comes from a book by Elizabeth Caroline Grey: Passages in the Life of a Fast Young Lady, published in 1862. (Must.buy.) Back in Vicky’s day, a fast young woman was one who acted like a man: she

What little time I have left, I spend wandering around, looking at the architecture, the guild signs and reading stories on walls, always a delightful past time. 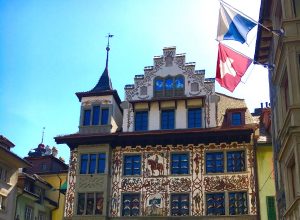 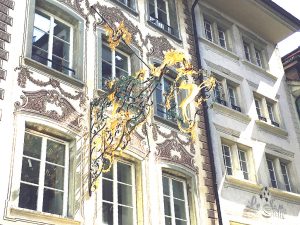 Our friend Goethe was here, as well. Dude got around. 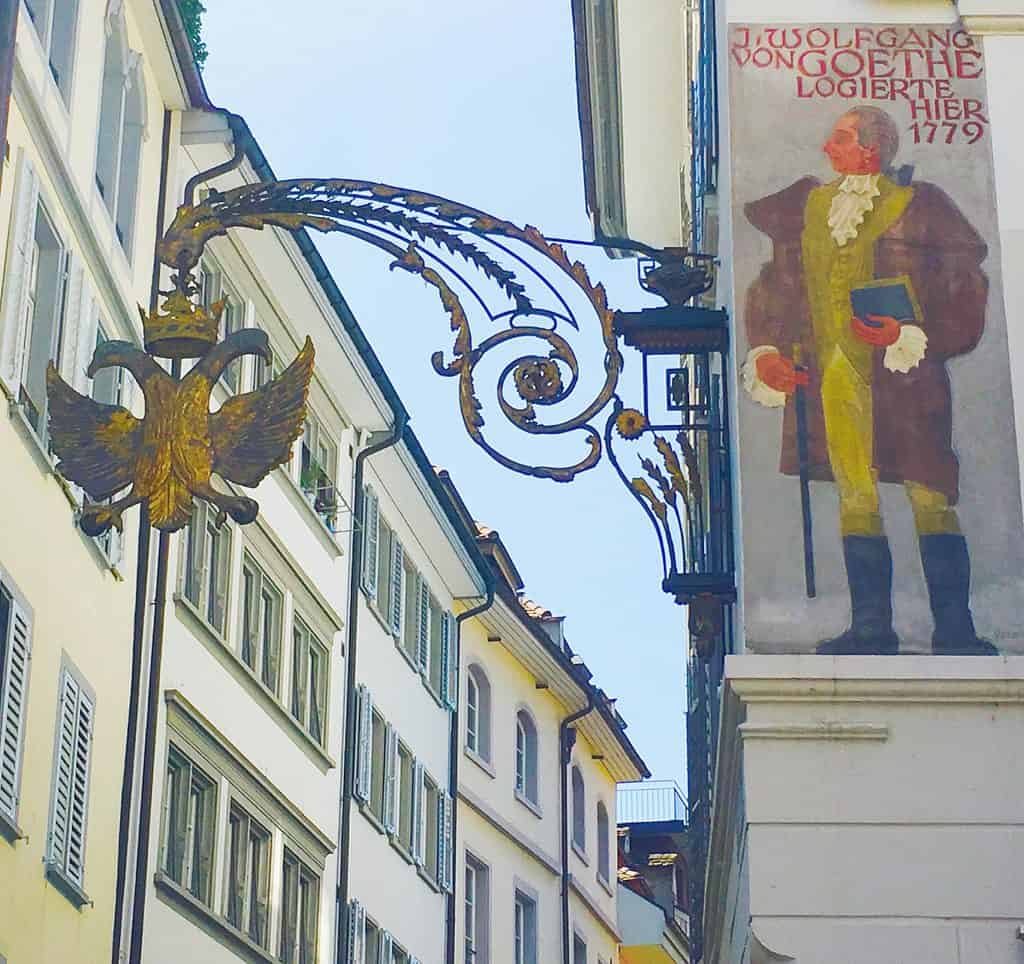 I would tell you about food, drink, cafes, restaurants, etc. in Lucerne, but I fear I can’t. Just didn’t take the time. Coffee on the train for me. And loud, amusing folks from Boise.

Disclosure: I’ve been in Switzerland often, for government work, at someone’s invitation, or on my own dime. This time, I was here as a guest of Switzerland Tourism. As usual, this has no bearing whatsoever on what I write – or even if I write anything at all. That’s the way it has to be. Otherwise, this makes no sense.