Q: Which was the first city to host Eurovision Song Contest? 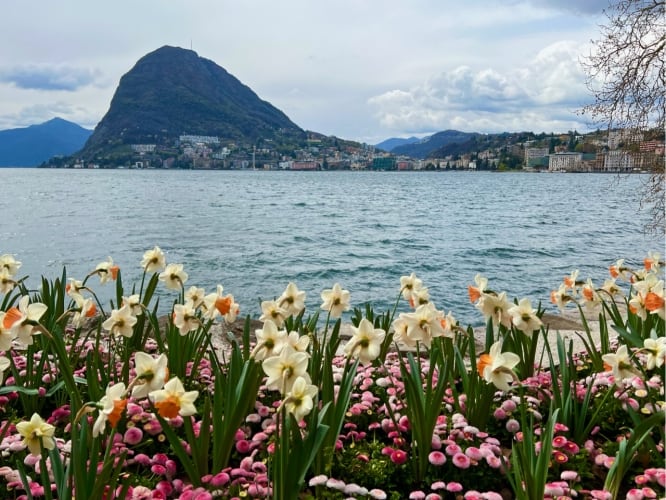 A: We are back in 1956 – and the answer is Lugano! And who won? After a bit of voting dispute, Switzerland did.

Finding yourself in Milan with a desire to get out of the chaos for a day? To a place where people drive (and park) like civilised folks? We did! Or rather, Cat did. Aghast at Italians’ blatant disregard for traffic rules, a bit of easy breathing space was in order.

What better then, than a day trip across the border to Switzerland! To Ticino, the Italian part of the country, but still… Switzerland. Where order reigns. Also, fresh air and nature’s very own beauty as far as the eye can see. And peace. Soft silence.

1hr8min after the train glides out of Milano Centrale, we arrive at Lake Lugano.

Or – not at the lake exactly. This is the Alps, so the landscape isn’t exactly flat, and the railway station is a bit above the town proper. We have stairs to descend to get to the centre. But first… this! 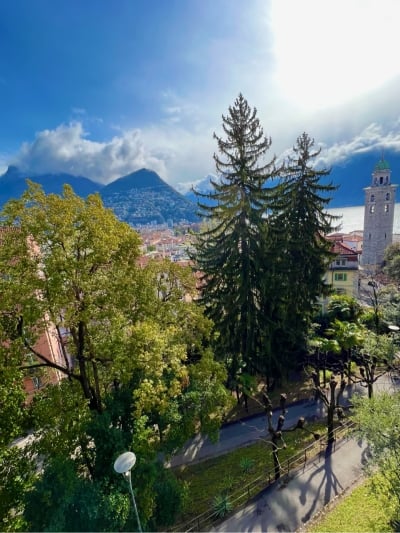 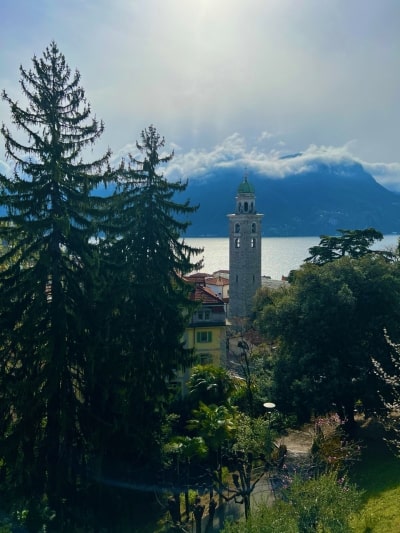 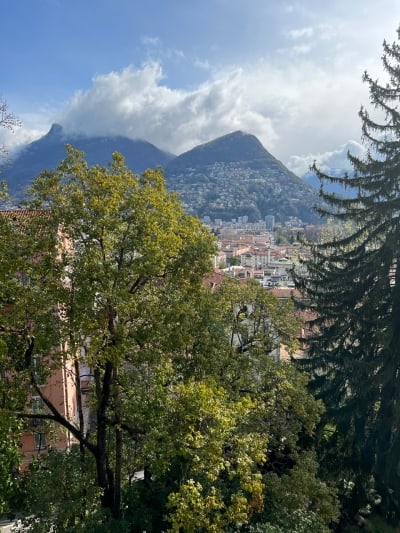 Exit the train station, and this is what greets you: Lugano takes your breath away from the get-go.

Down to town we go – 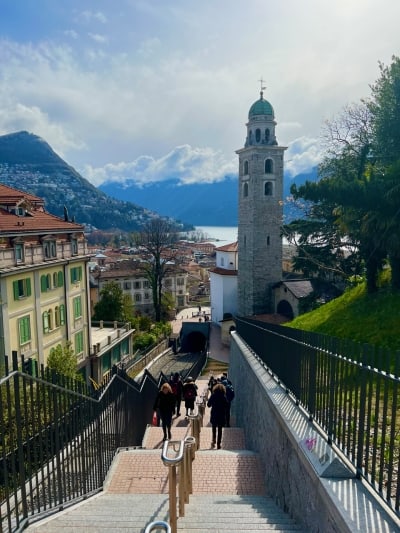 – past the pretty tower of the town’s cathedral, Cattedrale di San Lorenzo.

People have lived here in Lugano since the Stone Age. And whilst the colourful buildings weren’t here, the stunning lake and surrounding landscape were. I can see the Stone Age version of myself living here.

Skip forward a couple of millennia to the first century BCE, and those ever-expanding Romans have taken over. Graves, coins and inscriptions have been discovered. About another millennium onward, and we have the dukedoms of Como and Milan quarrelling over this market town. (Remembering that Italy didn’t exist as a country until the risorgimento – unification – in 1861.)

Continuing our forward time leap, we have now reached 1503: Lugano has just become part of the Swiss confederacy, the forerunner to present-day Switzerland.

I’m gonna go out on a limb here, and bet most people in town are happy to be Swiss. Especially those that like to not have their cars scratched and dented. And their streets not littered. 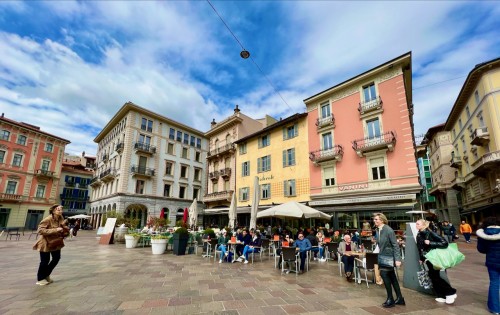 Piazza della Riforma in the midst of Lugano’s historic centre

Centro storico – the old city centre – is compact, with Piazza della Riforma as the starting point for a wander through the narrow streets. Baroque and Renaissance buildings abound. Boutiques selling shiny luxuries vie for space with little bookstores, local butcher shops and the like, such as the Salumeria in the yellow building here, on Via Pessina. 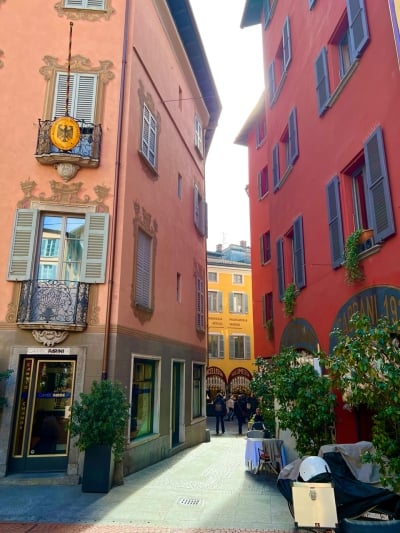 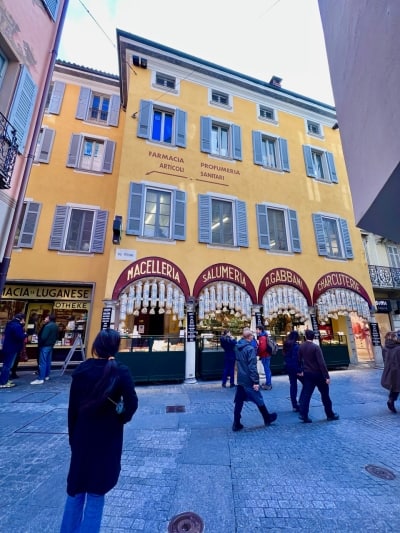 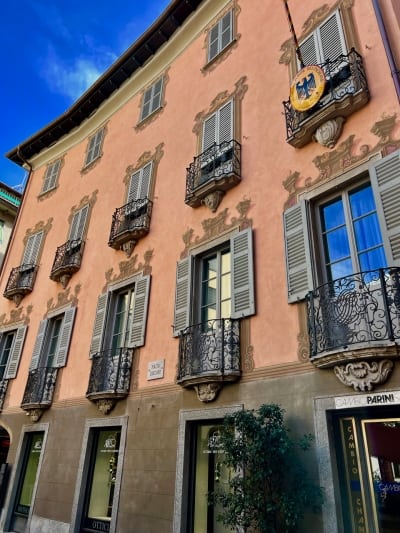 You will also find plenty of cafes and restaurants around Piazza della Riforma, even outdoors, with heating lamps on a chilly day. Feels like the Mediterranean. 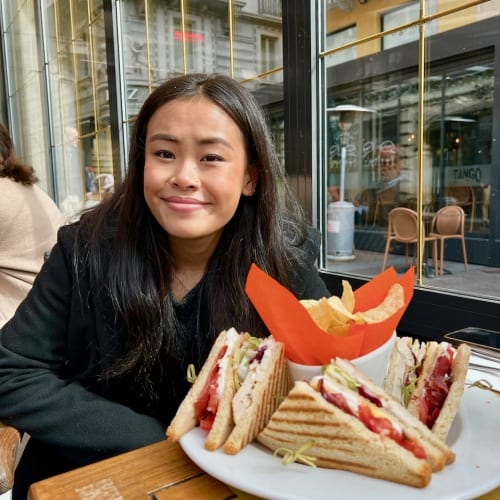 Cat recommends club sandwiches at Vanini Dolce e Caffè. Not exactly Swiss fare, but there you are.

OK, let’s continue the exploration. In fact, let’s take a walk in the park. 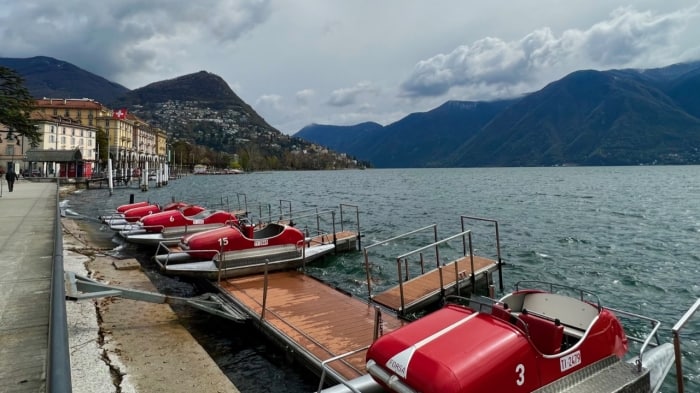 Along the lakeside promenade, we pass parked paddle boats. It is the very beginning of April, too cold for playing on the water. We contemplate taking the funicular up to Monte San Salvatore or Monte Brè, the two mountains nearest the town. The views are bound to be magnificent. But it is simply too cold, and we are not dressed for it.

Trees and bushes and colourful flowers surround the lake inside the park and pretty much everywhere else, even this early in the year. 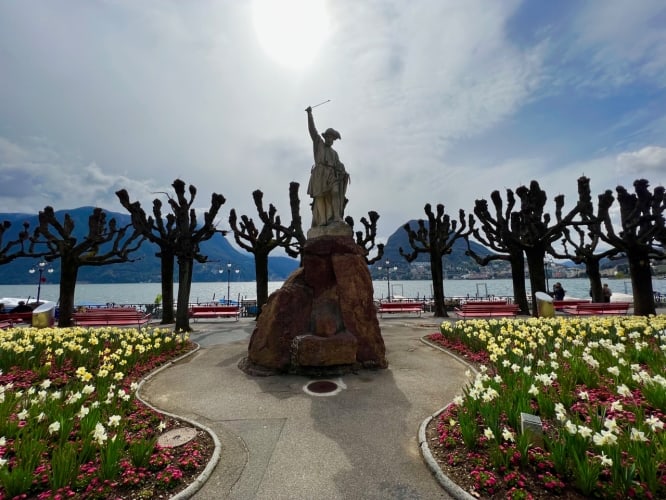 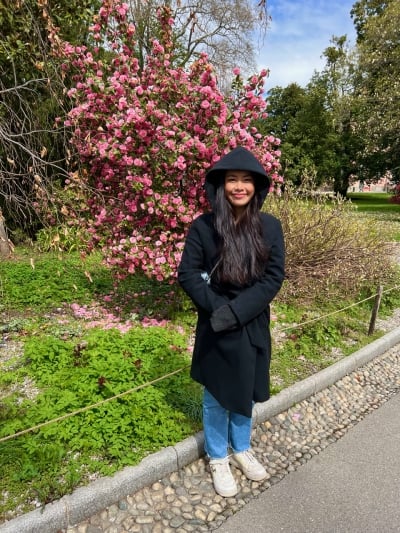 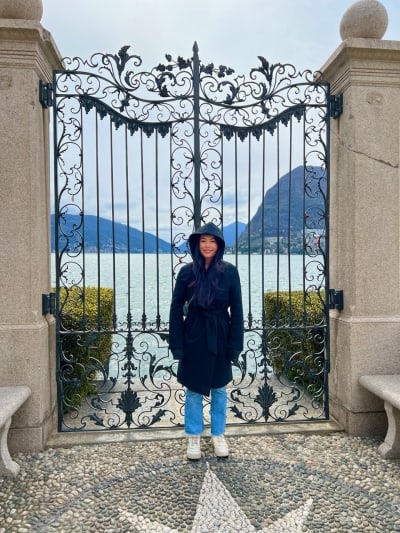 Windy and chilly, but oh so pretty 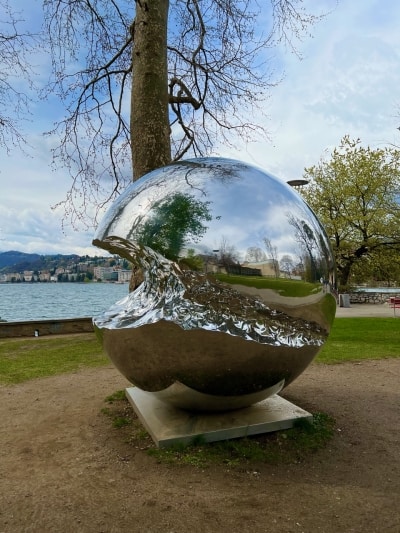 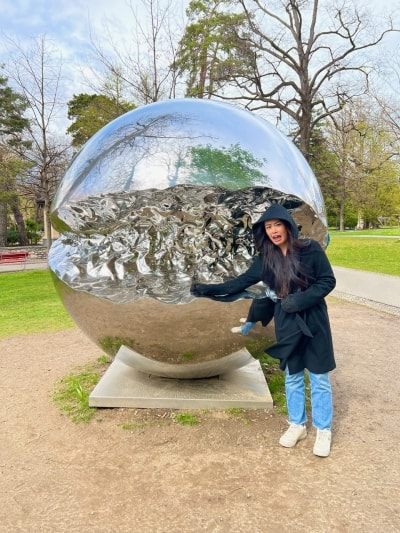 The park is like a large garden around the neo-classical Villa Ciani, built on the foundations of a 15th century castle that belonged to the Dukes of Milan in the Sforza era. (Does that sound familiar? If you have read Thomas Harris’ book The Silence of the Lambs, perhaps you remember cannibal/serial killer Hannibal Lecter was descended from the House of Sforza.) 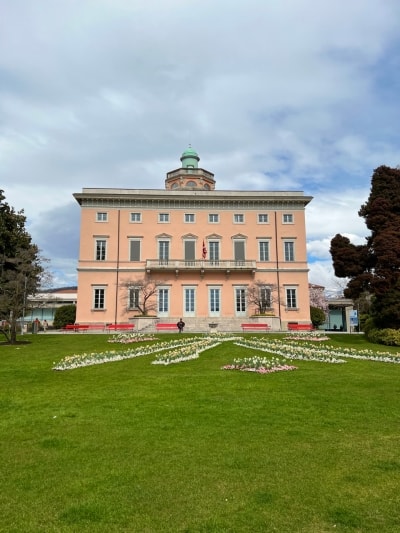 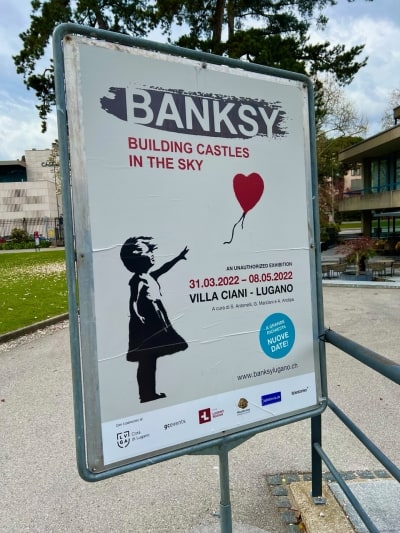 The villa we see and wander about in today, was built by brothers Giacomo and Filippo Ciani, political activists from Milan. In the early 19th century, Milan was under Habsburg rule. To avoid being arrested for rioting against that Austrian occupation, the Ciani brothers ended up fleeing in 1822 – first to France, then to England. They finally settled in Lugano in 1830. Close to home, but still a safe distance away.

Today, Villa Ciani belongs to the city of Lugano, and can be hired for conferences, weddings and other events.

Sheer luck brought us here just in time for a fabulous Banksy exhibit. Building Castles in the Sky comprises more than 100 works by the elusive and delightfully controversial artist, provoking discussion on a wide range of topics: the future of our children and the planet, capitalism, Brexit, war… I see that it is on its way to New York just now, opening this weekend and running until 5th September. Hereby recommended. 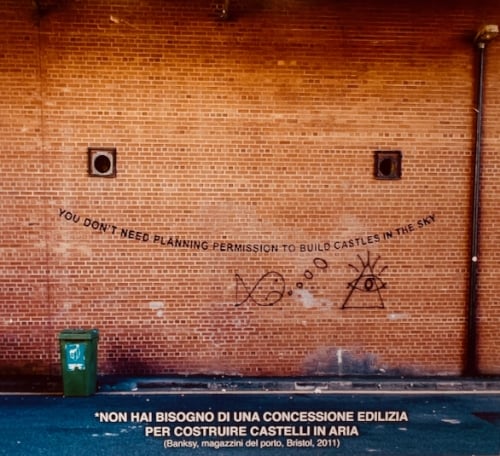 Time to return to Milan. Heading back up the stairs towards the railway station, we stop at the cathedral for a final look at the vista that is Lake Lugano. 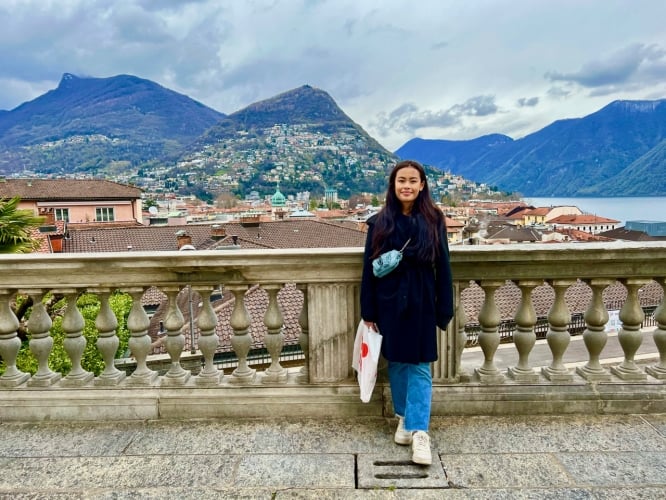 Only so much you can fit in to a few hours. I’d like to return for a proper exploration, preferably in summer. Spending a lazy day on the lake. Have a look at some of the little villages along its shores. Getting up in the mountains; Monte Brè, known as Switzerland’s sunniest mountain, is just 925 metres high, and has a charming village at its foot.

PS: When I named this post ‘Lucky Lugano’, I had its lush location and easy beauty in mind. Saying it out loud now, though, it sounds like the name of a 1920s Mafioso gangster. Well… we can’t let the bad boys have an exclusive right on lucky names, can we? I’m keeping it.