A few words today on Greece, FYROM and the Macedonian naming dispute.

Returning from Kosovo, Alex, my driver, complains about fuel prices. Who doesn’t? Yet, he has better cause than many of us. At Aktiva Petrol on the outskirts of town, unleaded 95 octane petrol cost 65,5 dinars per litre. 1 Euro = 61 dinars: that’s pretty expensive for a country where salaries are low and unemployment, according to UNDP, is more than 35%. Alex furthermore tells me a job in a store in Macedonia pays 200 Euros per month, while the same job in the same chain in Greece pays 1,500 Euros per month. People feel this is very unfair, he says.

That’s not the only trouble they have with their neighbour to the south. Earlier this year, Greece rejected Macedonian entry into NATO and will likely do the same when the question of EU membership arises. The two nations are at strife over a word, specifically the name Macedonia, also the name of Greece’s northernmost province.

Arriving in Skopje’s Aleksandar the Great airport, you’re welcomed to the Republic of Macedonia. The Greeks worry that if the country is allowed to use Macedonia as its official name, it will pave the way for expansion further south. Moreover, the Greeks are none too pleased at the suggestion that said Alexander the Great was Macedonian rather than Greek Macedonian. 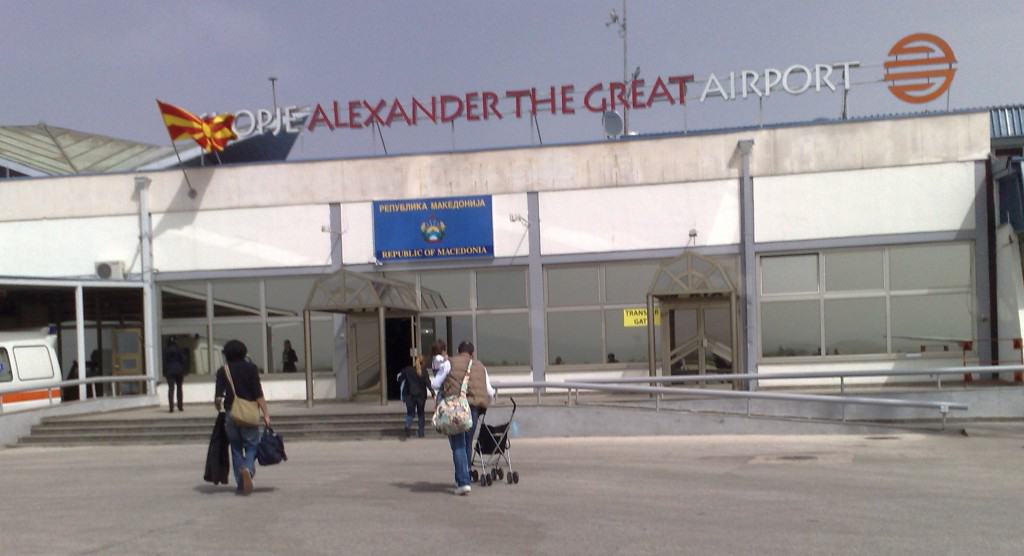 Just like Kosovo, Macedonia is at a bit of a standstill regarding future membership in international organizations. After two unsuccessful applications, the country was finally allowed to join the UN in 1993, providing they didn’t use the name Republic of Macedonia, but rather the long, awkward-sounding provisional name Former Yugoslav Republic of Macedonia – FYROM, for short. Because of the naming dispute (covered in my Skopje article and in much more detail in Wikipedia), Greece has successfully hindered Macedonia’s membership in other organizations. FYROM is also still the country’s internationally recognized name, but that doesn’t stop Macedonia from dropping FY and retaining only ROM.

Last April, I visited Skopje. About the same time, NATO’s Bucharest summit decided not to issue an invitation to Macedonia to join the organization because of Greek objections. A year later, curious to see whether there has been any developments, both regarding future EU and NATO membership, and relations with Greece, this is what I’ve gleaned:

Macedonia is a candidate country for the EU

As far as the naming dispute is concerned, the latest seems to be a proposal from October 2008, suggesting the country may use the name Republic of Macedonia internally. For official purposes, it is to be called Republic of North Macedonia. This, apparently, is not acceptable to Macedonians. Their solution might be to allow Greece to use the name Republic of Macedonia (Skopje), as long as this is OK with the Macedonians (to be decided through a referendum). It seems they want to keep the issue under their control. Who says names aren’t important!

Trade between Greece and Macedonia

As for relations with Greece, the naming dispute hasn’t hindered trade. Bilateral relations between the two neighbours are continually improving – as long as nobody mentions the name issue. Talking to Macedonians last April, though, I got the impression they didn’t trust the Greeks. Furthermore, there seemed to be a feeling of inequality. The salary issue above was cited as an example.

Other countries in the picture

To complicate things further, there are also large Macedonian populations within the borders of Bulgaria, Albania, Serbia and Kosovo. It will be interesting to see how all this folds out in the EU family when everyone’s in. And it’s bound to happen. The only really relevant question is when.