Catarina, my youngest, is 8; Alexandra, my oldest, is 13 years older. Mostly, they (and I) have different favourites. However, Portmeirion, a fairytale seaside village in Northern Wales, is an exception. We all adored Portmeirion at first sight. It’s a crazy, beautiful place. 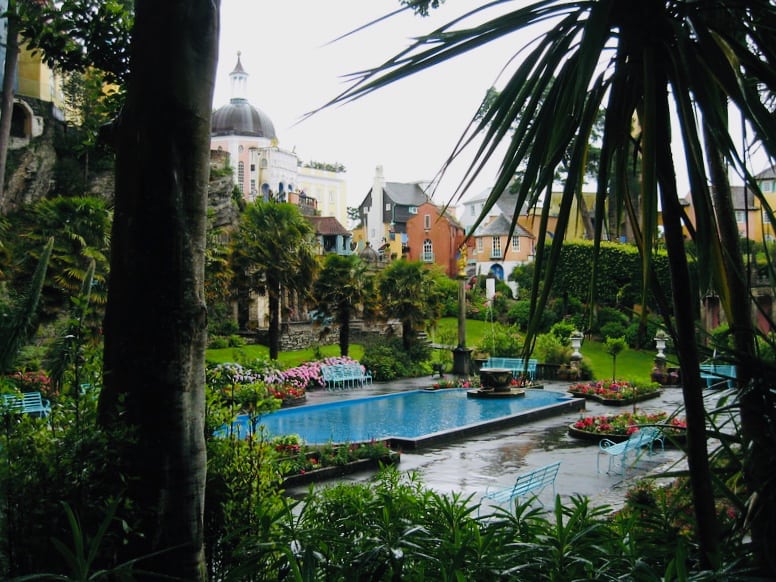 Going south from Caernarvon, our first stop is Porthmadog. Odd name, isn’t it? Nice enough little coastal town, though. In Notes from a Small Island, Bill Bryson stops by Porthmadog. Why he didn’t visit nearby Portmeirion is a mystery. Maybe he was discouraged by Welsh rain. Or maybe it’s so hidden away, he didn’t see it. 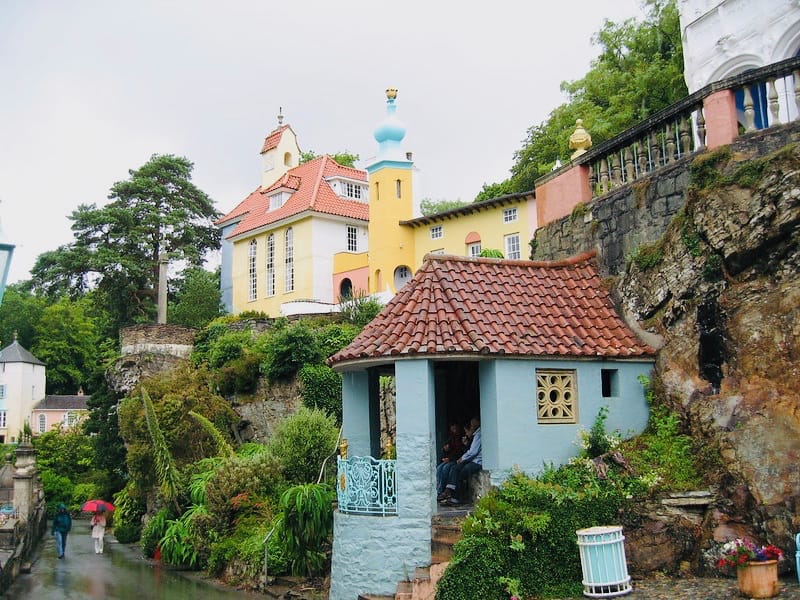 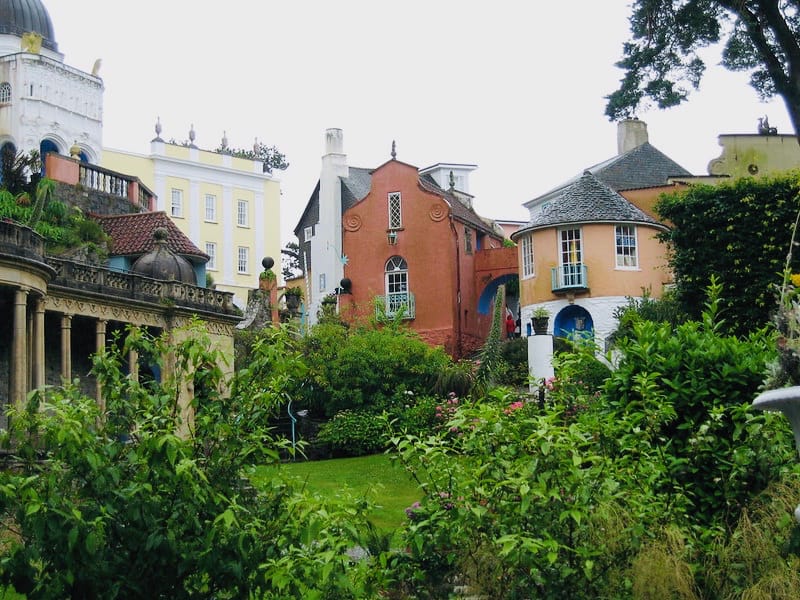 Portmeirion and the eccentric architect

The village was conceived by architect and conservationist Clough Williams-Ellis. Although architect is perhaps not the correct title. After 3 months in school, he decided he had learnt enough. Then, firmly believing a planned community could be beautiful, he began creating Portmeirion. It’s an absolute masterpiece and unlike anything I’ve ever seen. 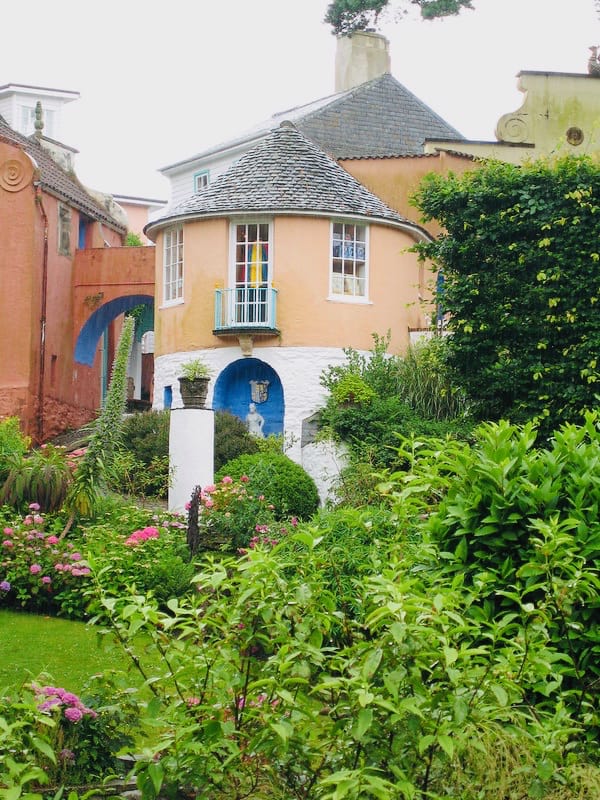 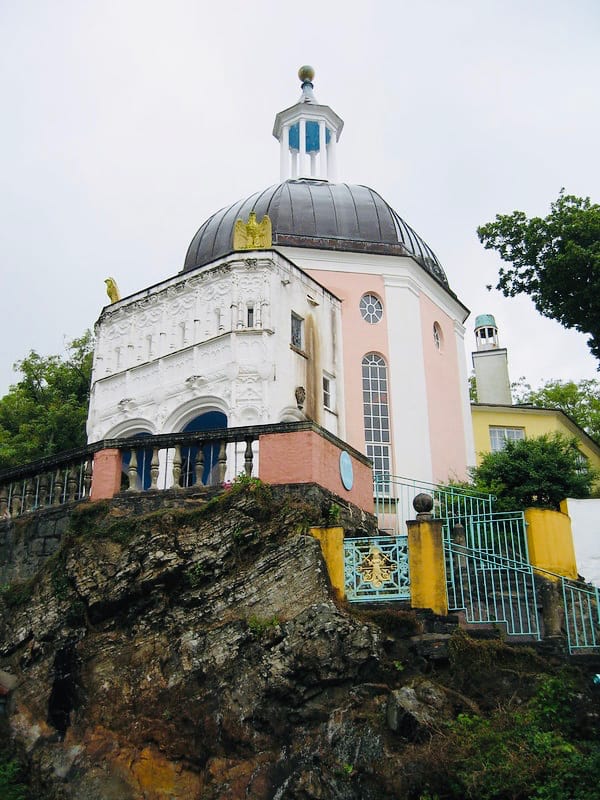 We enter the village through a michelangelesque archway – reminiscent of the Sistine Chapel. After that everything is magic: a piazza with a pool, a fountain, golden statues on tall pedestals and heaps of flowers everywhere. 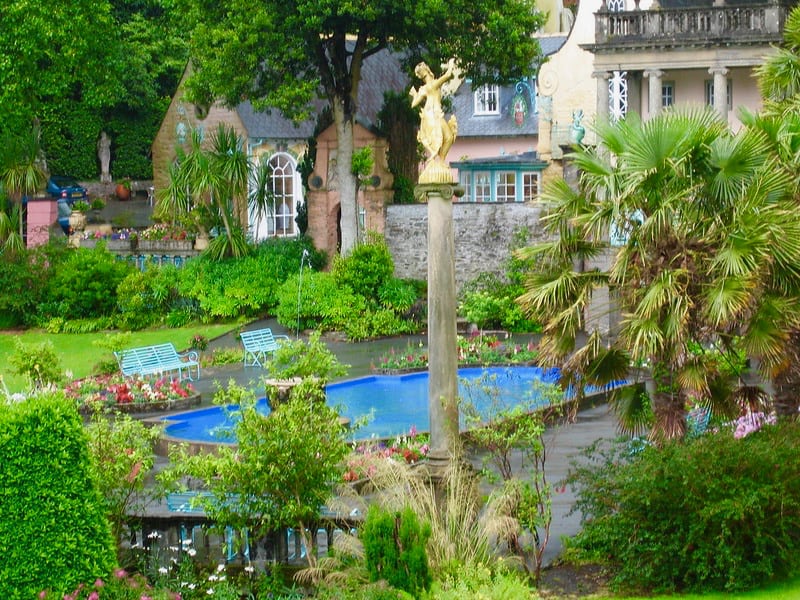 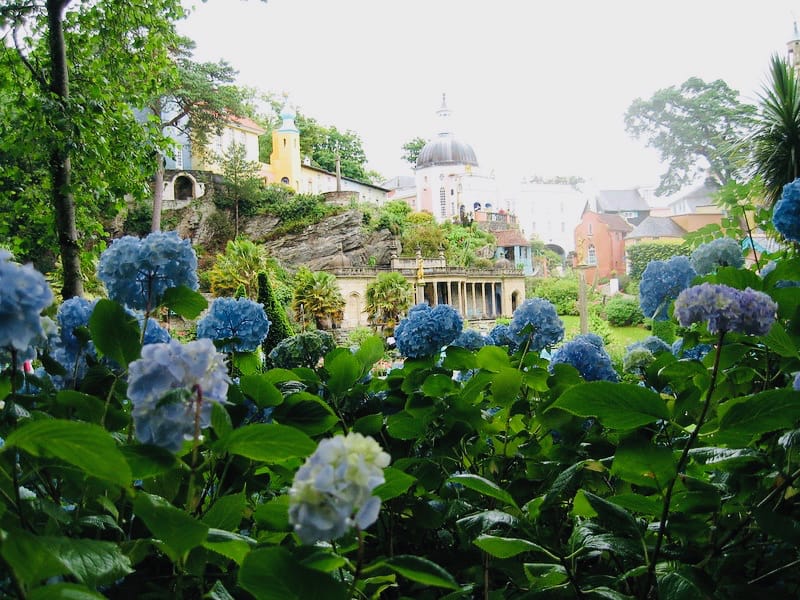 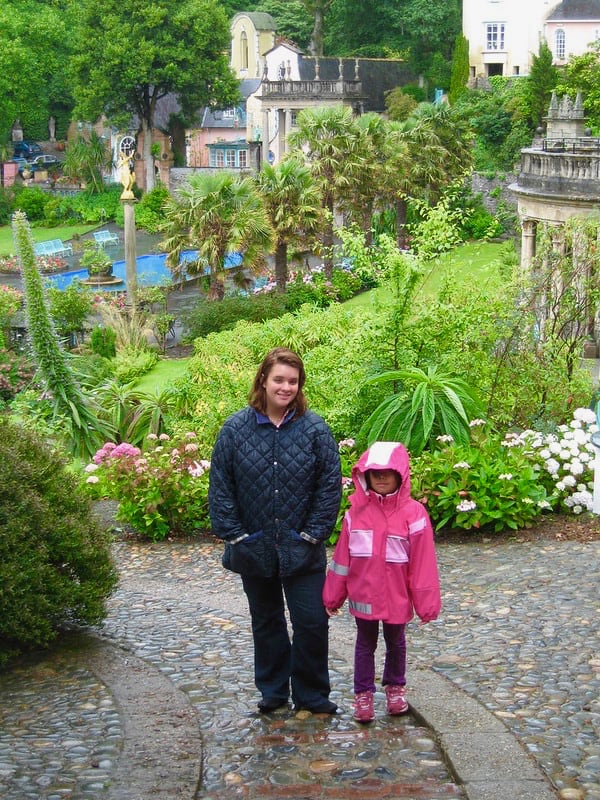 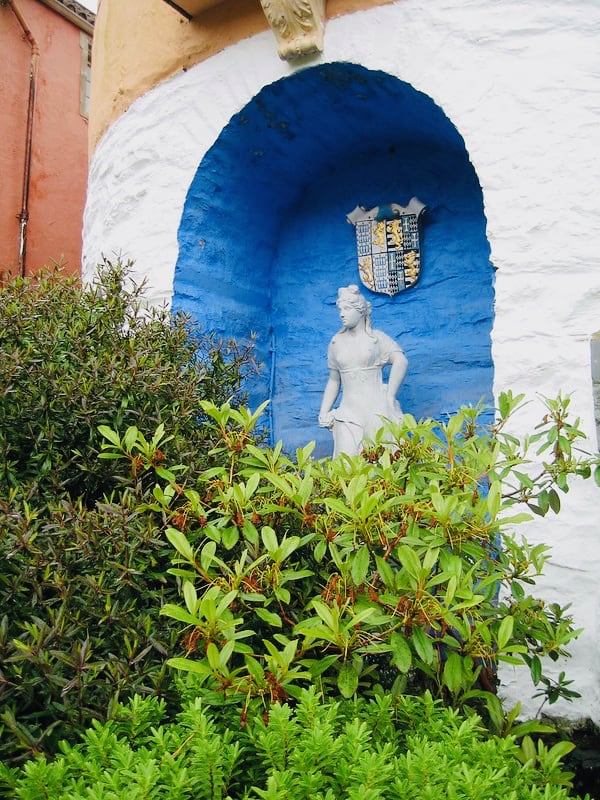 Houses with lofty bell towers, with odd little balconies, statues in niches along the walls, a colonnade, a Gothic pavilion, secret grottoes, a gazebo, a bandstand, gargoyles, a giant golden Buddha in a temple even. Flowers come in every imaginable colour. Tall firs, oaks, willows, a giant sycamore; all greener than green. 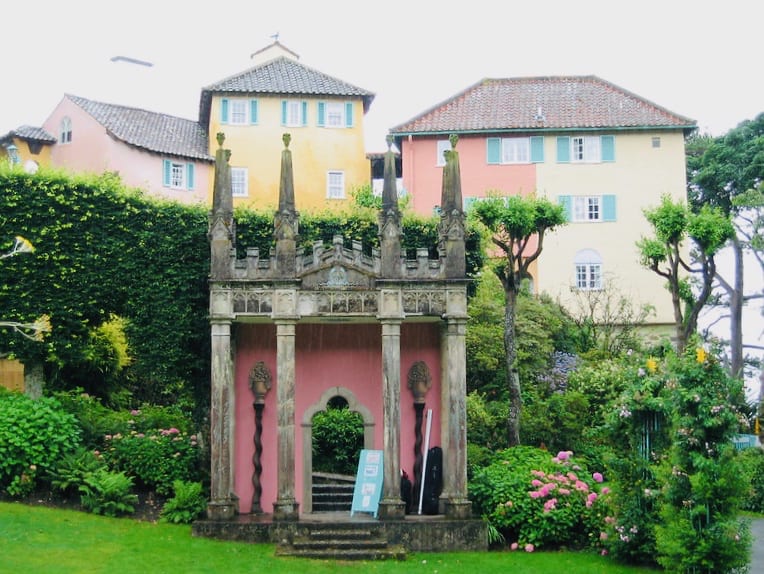 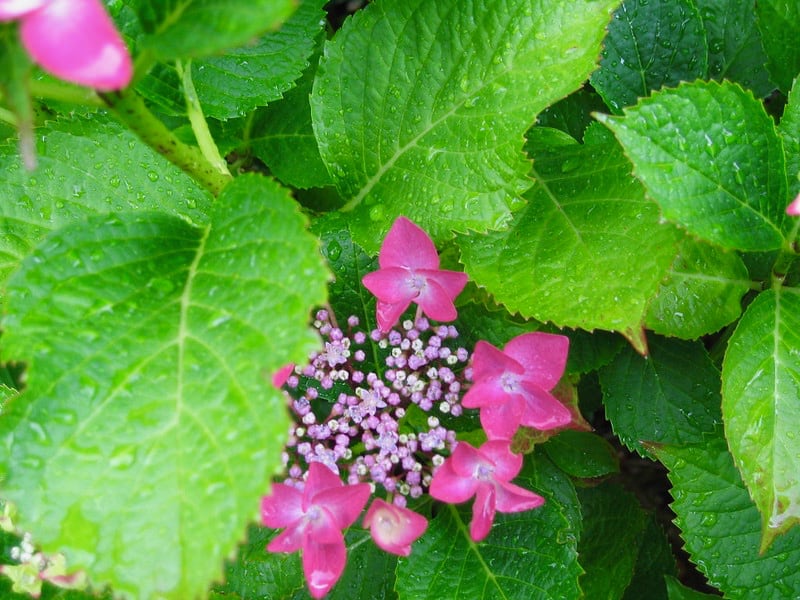 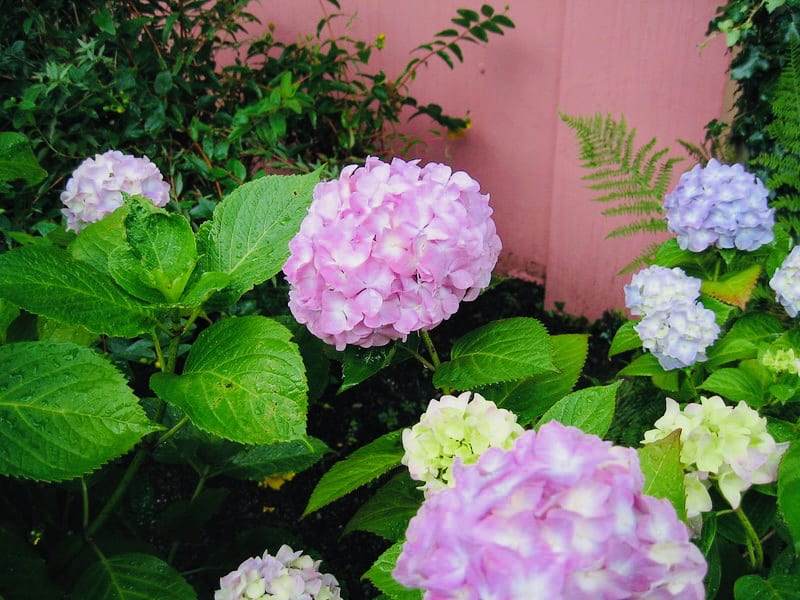 We visit just after a spell of rain. That could have something to do with the vibrancy of the hues. I’ve never seen such lush colours anywhere: the bright turquoise of the pools, houses painted in warm lavender, rich persimmon, shimmering cerise and golden honey, all the shades of the desert in the midday heat. 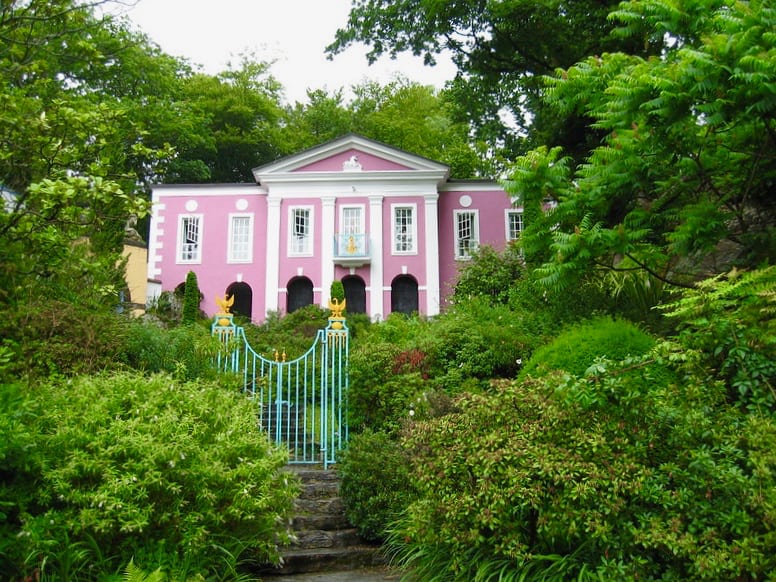 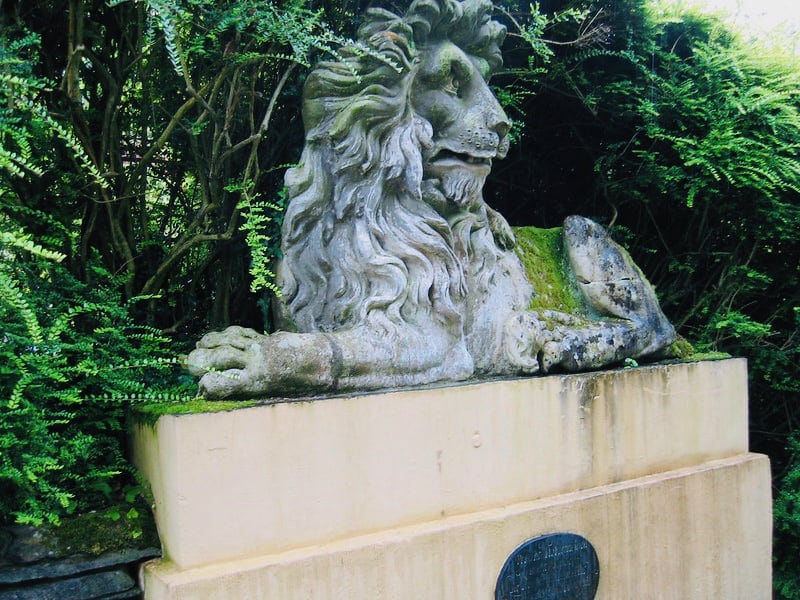 Portmeirion has been used as a set in a few films, most famously the 1960s’ series The Prisoner and The Laughing Prisoner from the 80s (with Hugh Laurie and Stephen Fry). More recently, parts of the final episode of Cold Feet was filmed here.

The little village has attracted a host of famous people, writers in particular: Noel Coward, H.G. Wells and my countryman, explorer Thor Heyerdahl. Ingrid Bergman and the Beatles liked hanging about here as well.

It’s possible to stay in Portmeirion Hotel by the seashore; very nice for taking long walks along the beach at low tide. You can also stay in one of several cottages – quaintly named The Mermaid and White Horses – dotted around this fantastic little village. Or, you can stay in the slightly spooky-looking Castell Deudraeth in the woods immediately outside the village. 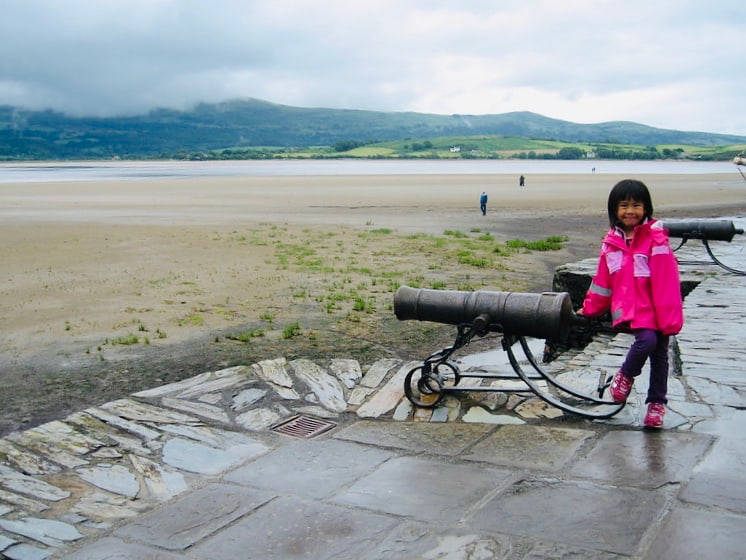 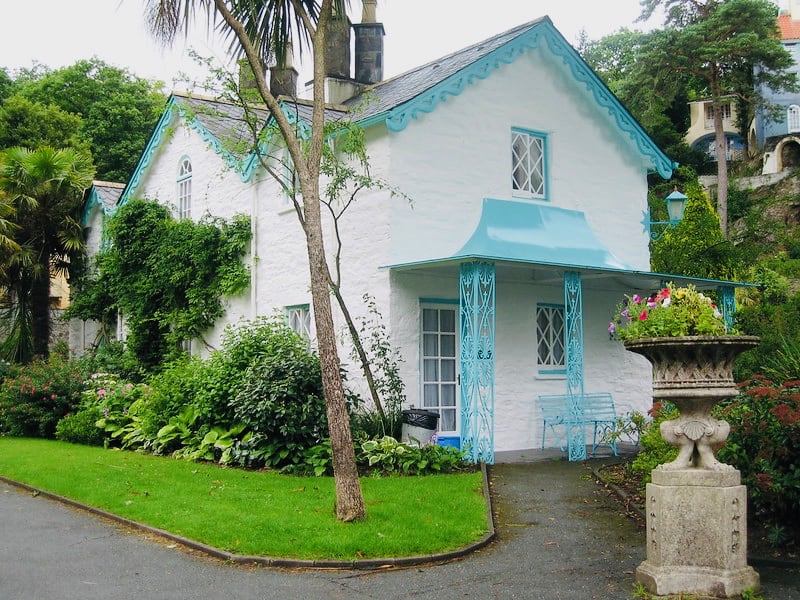 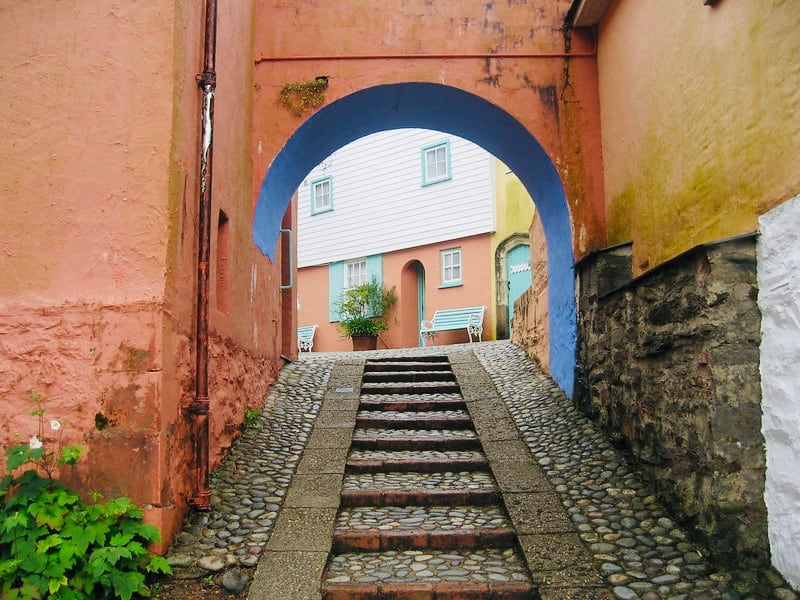 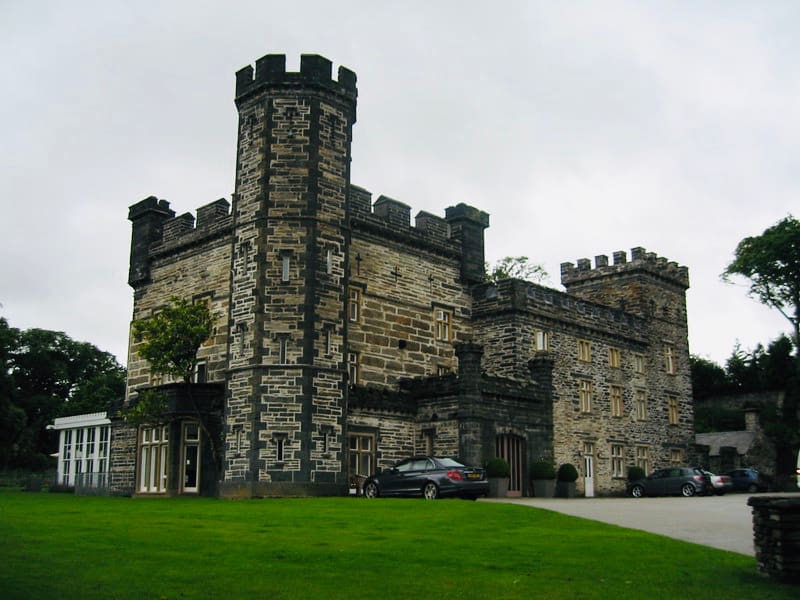 As we drive away, Castell Deudraeth looms in the rear view mirror. George Harrison celebrated a major birthday here. Hm… October might not be the best time, but my Halloween birthday could be suitably spooky in Portmeirion … something to think about. 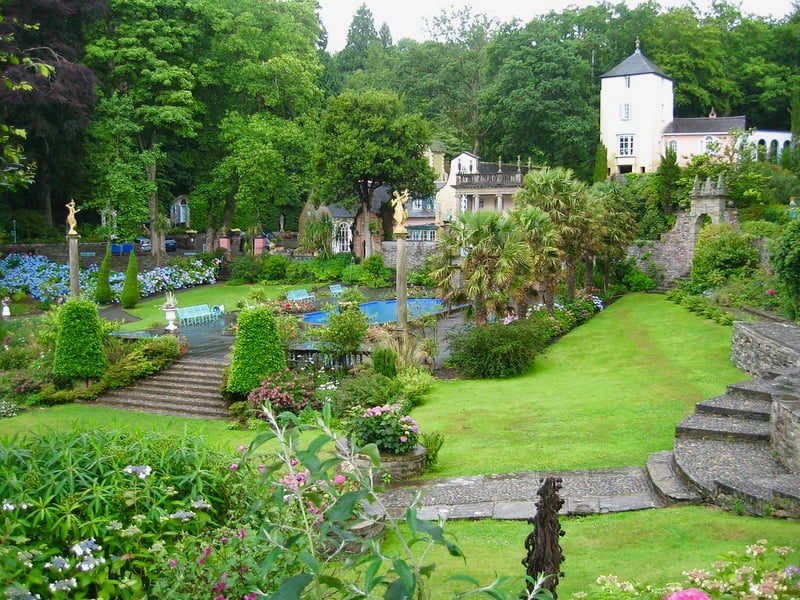