Things to do in Manchester if you’re not into football

So… imagine you are in Manchester. With a girlfriend – or boyfriend – who’s here for one thing and one thing only: footie! You, on the other hand, couldn’t care less for the Beautiful Game. You can’t even remember what the corner kick rule means, even though you’ve heard it a million times. Well then: while she/he is gawking at Zlatan’s legs, what is there for you to see and do?

Lots, that’s what! The capital of Northern England has heaps to offer. And I’ve scoped out a bit of it for you. Just a tiny bit, mind. I only had half a Sunday in Manchester; not nearly enough. But that’s all well and good. Just means I have a great excuse to return. And you? You’ll probably regret not having been here before. The 100 times you’ve travelled to London, practically on auto pilot… some of those weekends could have been equally well spent here. Maybe even better. There’s a vital, independent, slightly defiant spirit in Mancs. I like it. 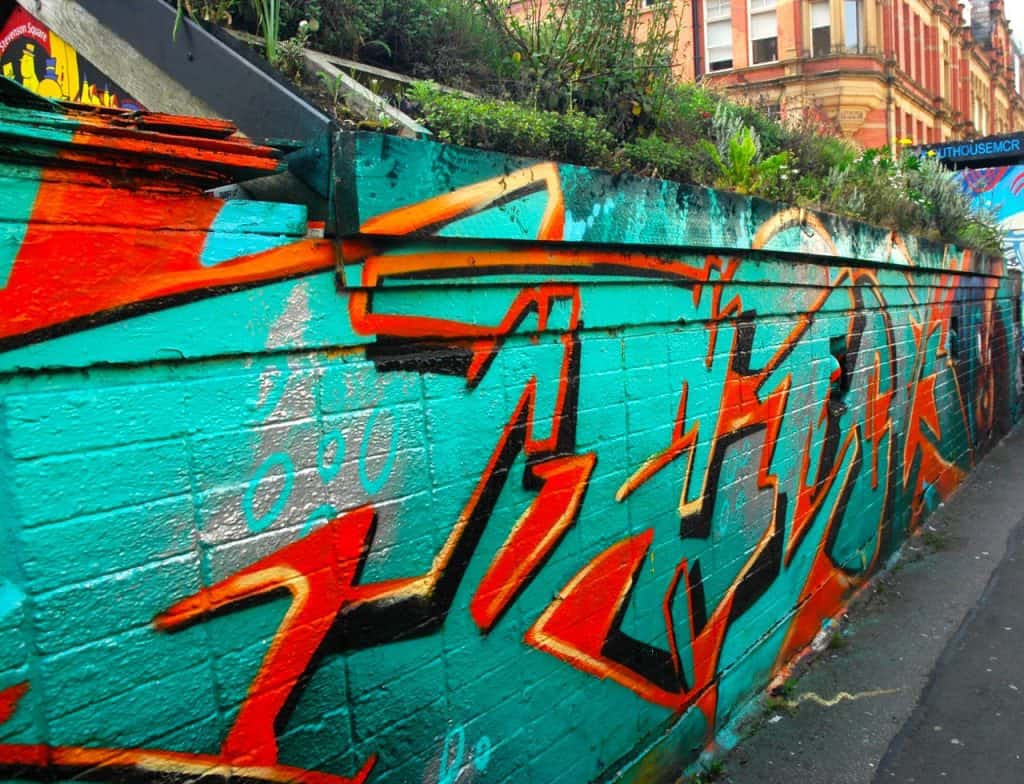 Into the hipster scene?

Not so much, perhaps? There’s still interesting and quirky street art to be found around every corner in Manchester’s Northern Quarter – as well as many independent galleries, boutiques, cafes and restaurants – and for you aficionados, there’s vinyl! And sometimes cafe and vinyl in one – such as Eastern Bloc (try the hummus/avo sandwich while you’re there). 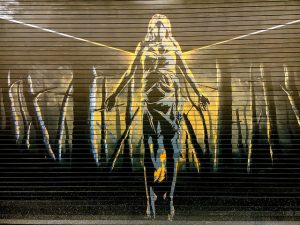 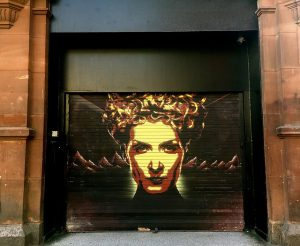 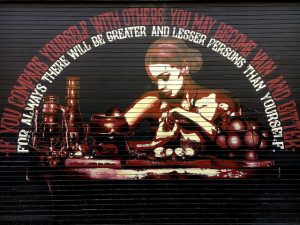 What I want to see and do next time in the Northern Quarter: 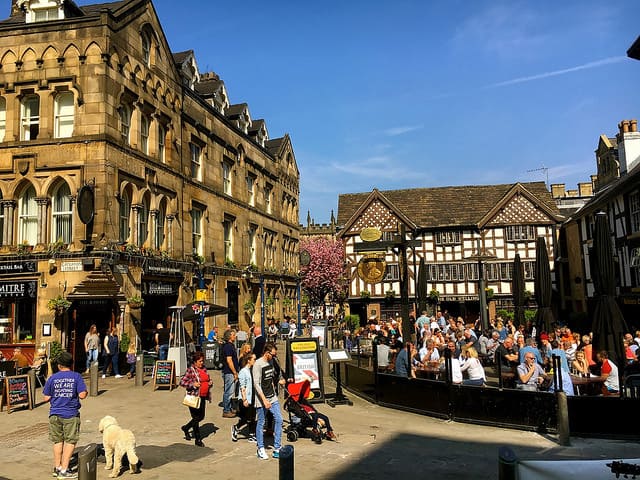 5 pubs within a radius of 60 metres: that’s what you’ll find at Shambles Square. And engaging history! This quaint collection of houses survived both the 1940 Blitz and an IRA bomb.

On 15 June 1996, the Irish Republican Army set off a car bomb in Manchester’s city centre, wounding 200 people, but mercifully killing no one! Seems terrorists were more conscientious back in the day; they called in warnings ahead of time. A famous survivor is this red post box which remained standing undamaged; unlike most of the surrounding shopping area. 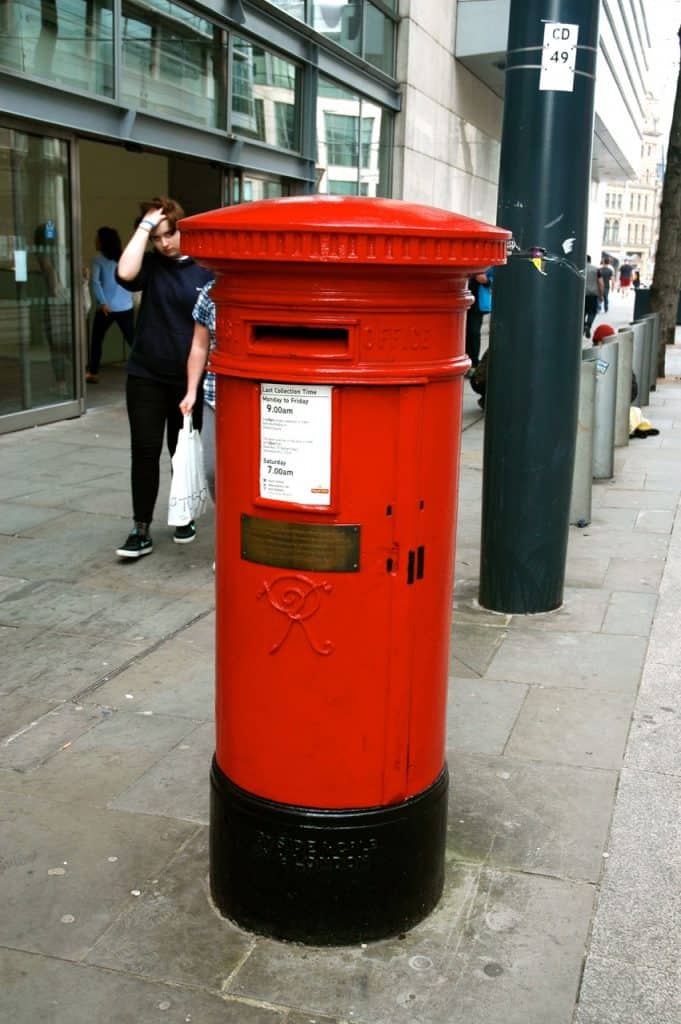 Nearby is this imposing building – by the intriguingly named Hanging Ditch. Through the centuries it has served as a corn and produce exchange, a shopping centre, a theatre company, and as filming location for the thought-provoking and melancholic 1980s TV-series Brideshead Revisited. (Alexandra wrote her Bachelor’s psychology thesis based on the friendship/love story between Charles and Sebastian.) It has housed various alternative acts as well; record shops, book shops, second-hand shops and more – before being hard hit by the IRA-bomb. Today it’s all about food: pop around for a Brazilian BBQ, Indian home cooking, street food from Mexico or Vietnam, and much more. 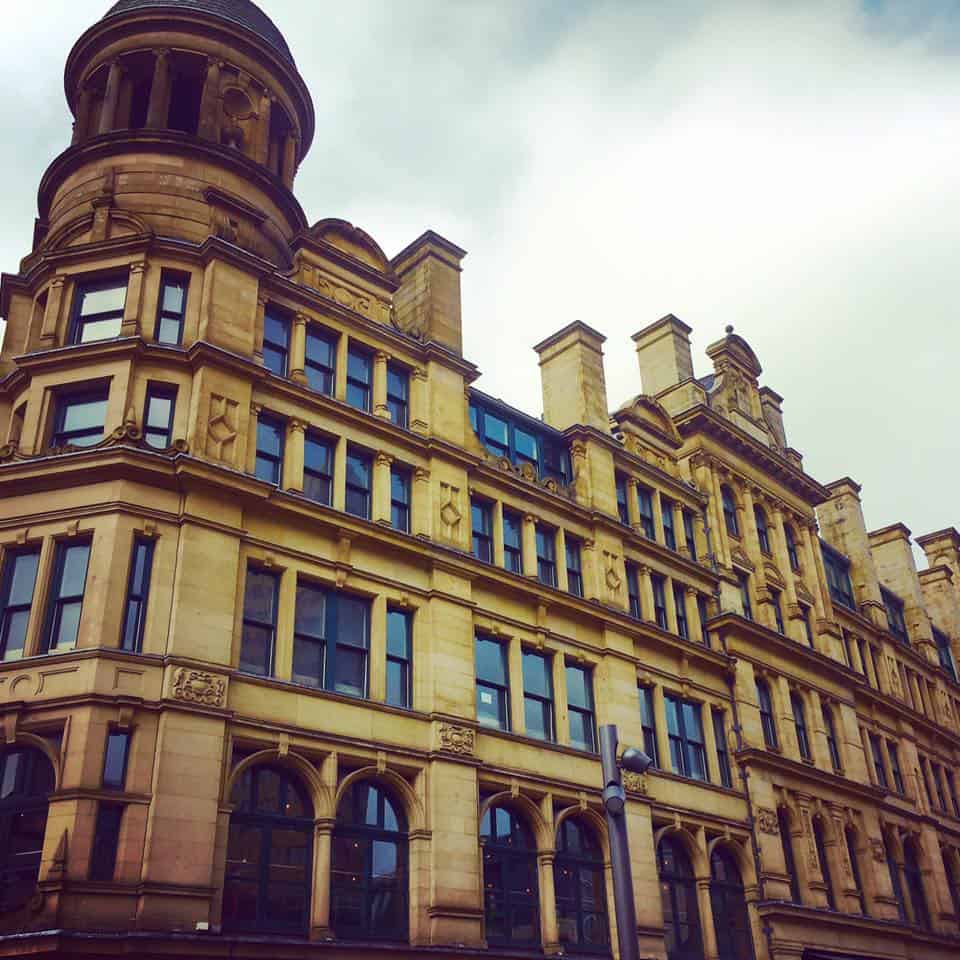 Every major city in the world seems to have one and Manchester’s Chinatown is the third largest in Europe. The pailou (traditional Chinese arch) was built in China and shipped over. Since 1996, Wuhan in Hubei province has been Manchester’s sister city – to encourage bilateral economic relations. Beneficial to have that in place now, probably. 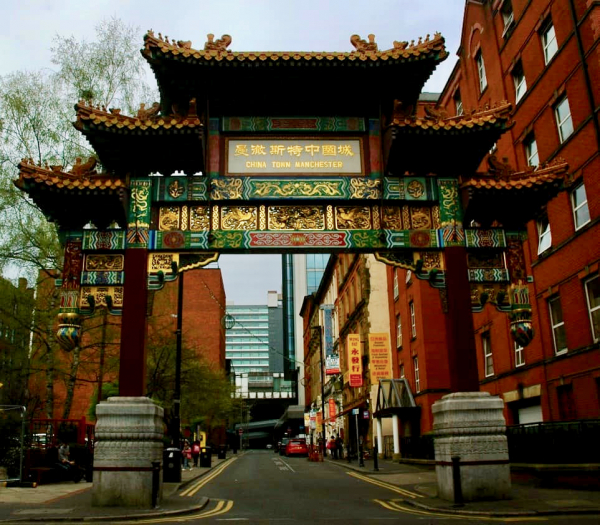 Manchester is home to the 400-year-old Chetham’s Library, the oldest surviving public library in the English-speaking world. This is where Karl Marx hung out, folks – brainstorming economic theories. Inspiring surroundings, to be sure. Closed Sundays. But as always, I’m lucky. The equally fabulous John Rylands Library was open – for another 15 minutes. 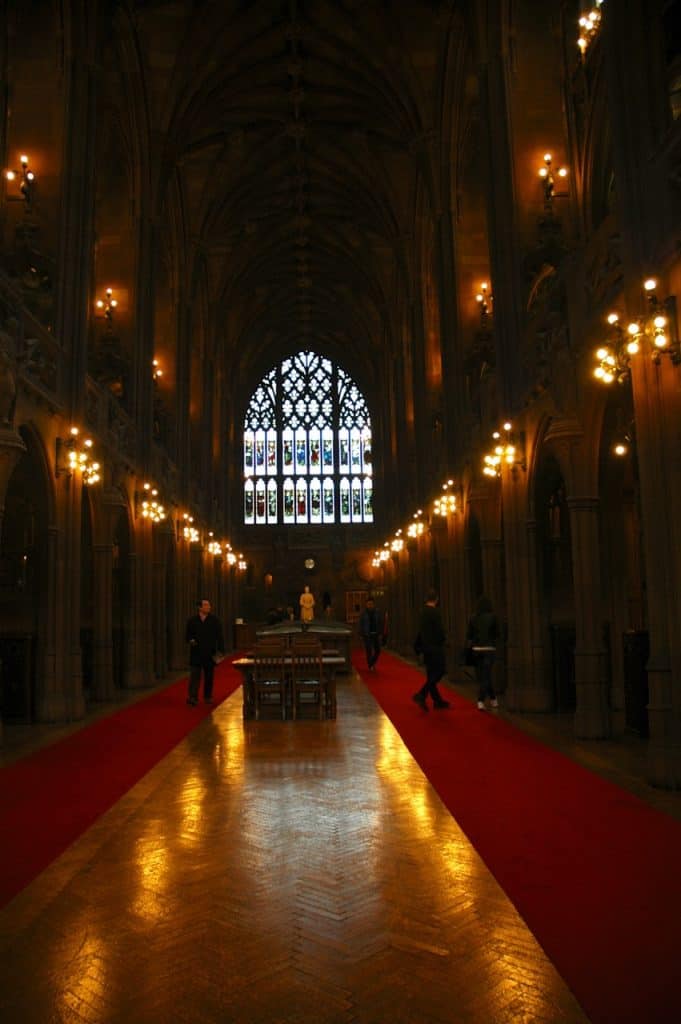 Opened 117 years ago, this spectacular building (Gothic meets Victorian meets Art Nouveau meets Harry Potter) on Deansgate houses illuminated manuscripts and rare volumes, including one of only 49 Gutenberg Bibles remaining in the world! There’s gorgeous high ceilings and stained glass windows (you’ll be forgiven for thinking you’re in a cathedral), historic reading rooms, and wonderfully dusty old books. Needless to say, you need much more than 15 minutes; I heard there’s an ancient toilet to be seen. 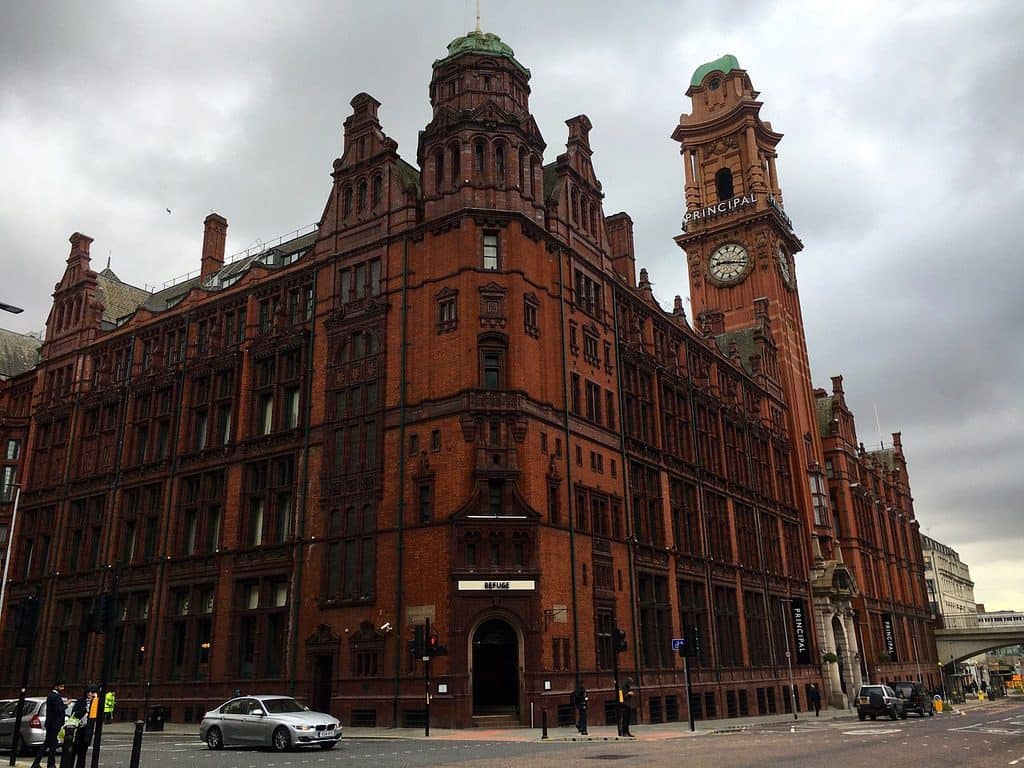 Too many cities have failed (or possibly not even tried) to find a good balance blending old and contemporary architecture. Manchester has managed this quite well, I think. The city is a product of its industrial 19th and 20th century past: Victorian neo-Gothic (Town Hall below), Baroque (Principal Hotel above), Art Deco, Palazzo, and more. I like the variety of design; always a surprise around the corner. 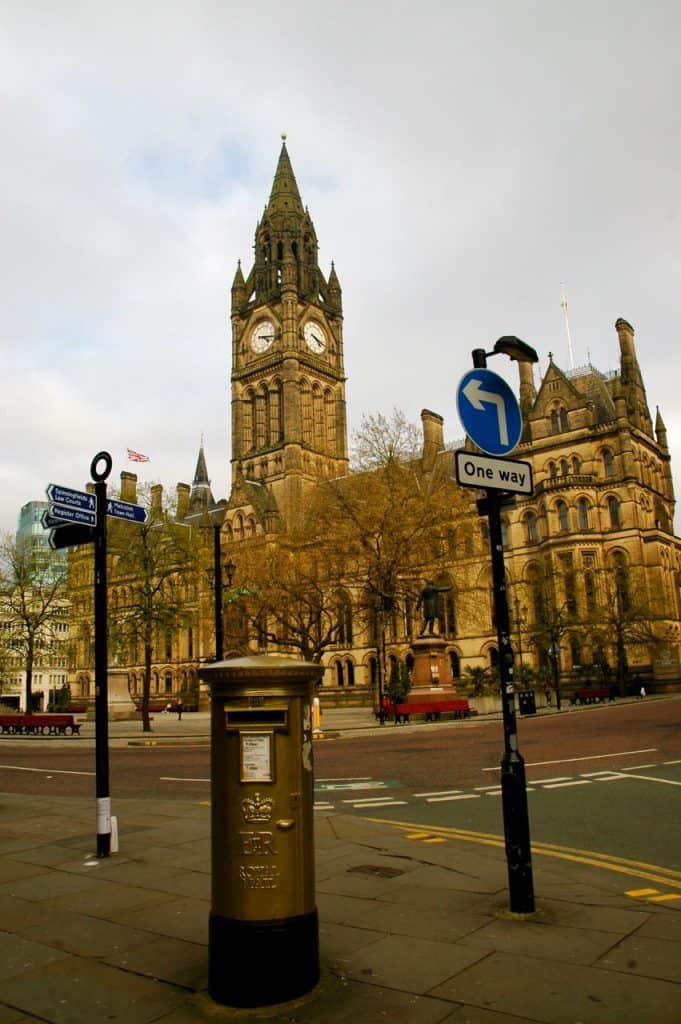 What I want to see and do next time in the city centre:

Into canals, houseboats, industrial heritage, Roman history, cool neighbourhood pubs and cafes, and/or just a really nice area to while away a sunny day? 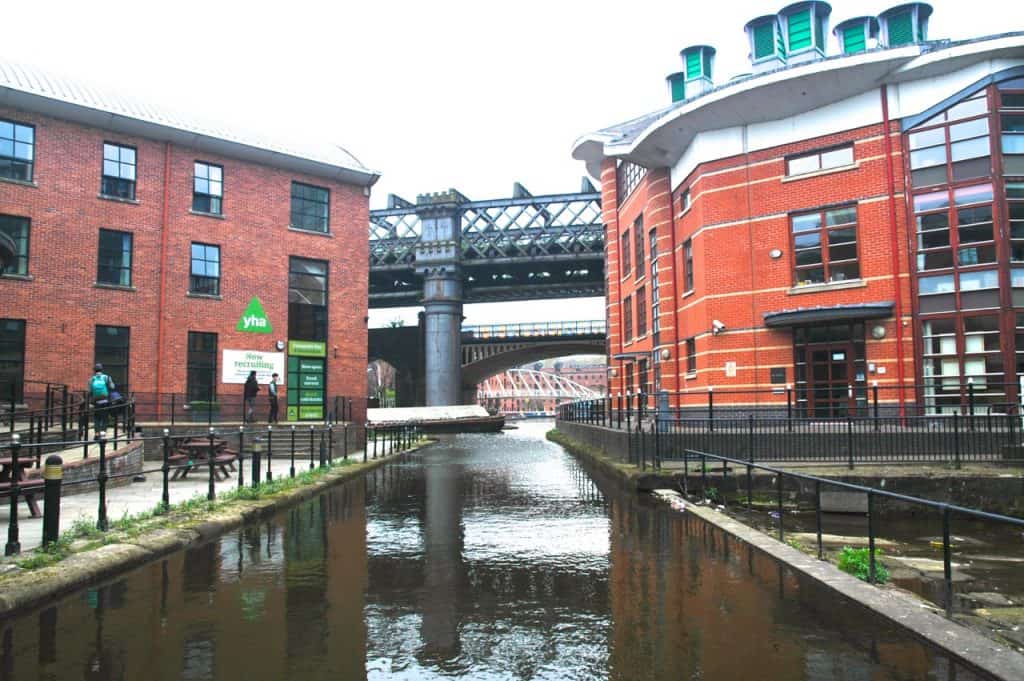 Do you know the Norwegian word kos? (Or perhaps the Danish equivalent, hygge?) The closest English word is cosy, though that covers but a fraction of the meaning. Kos, you see, is a noun, a verb and an adjective; encompassing just about everything that makes people happy and life wonderful. In Scandinavia, our lives revolve around kos. And on this April day, with cherry trees in full bloom, kos is my first impression of this neighbourhood.

Going from the River Mersey in Liverpool to the Irish Sea, the 123-year-old Manchester Ship Canal was once the biggest canal in the world, thus making Manchester a shipping city, despite being 40 km from the sea! If that isn’t industrious, I don’t know what is. And just as it should be for the world’s first industrial city. The remnants of this heritage is best experienced in Castlefield, where you can stroll along flower-lined canals, viaducts and warehouses. Then there’s the terminus of the world’s first passenger railway – and houseboats along the canal (you can even stay in one, The Castlerose, bookable through Airbnb).

And speaking of history: Castlefield also happens to be where it all began. Manchester got its name from the Roman fortress Mancunium. The fort has been restored, with dug-outs to demonstrate where the protective moats were located. 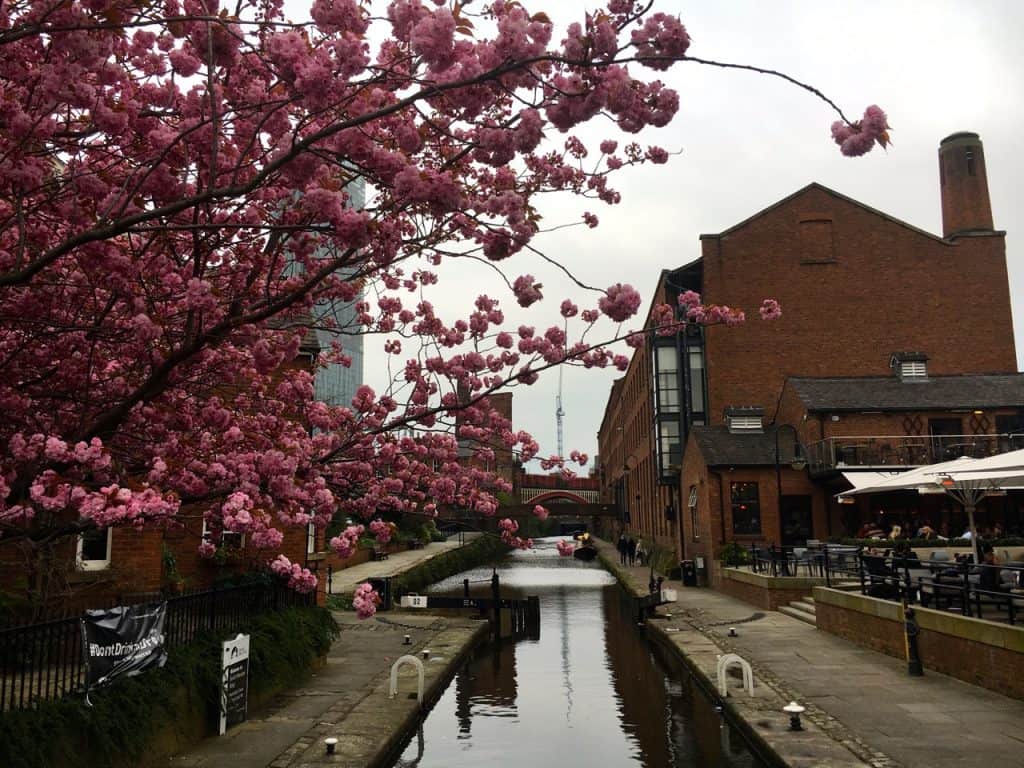 On a sunny day, have a picnic – or just work on your tan – in the grass by the canal. As for the neighbourhood pubs, well, I tried quite a few – all full of life and cheer. (Though I may be biased, as I had excellent company).

Here’s the canal in a different season (photo pinched from my friend and Castlefield local Tom Brothwell), also to illustrate how Manchester manages to combine its traditional urban design with new millennium architecture. 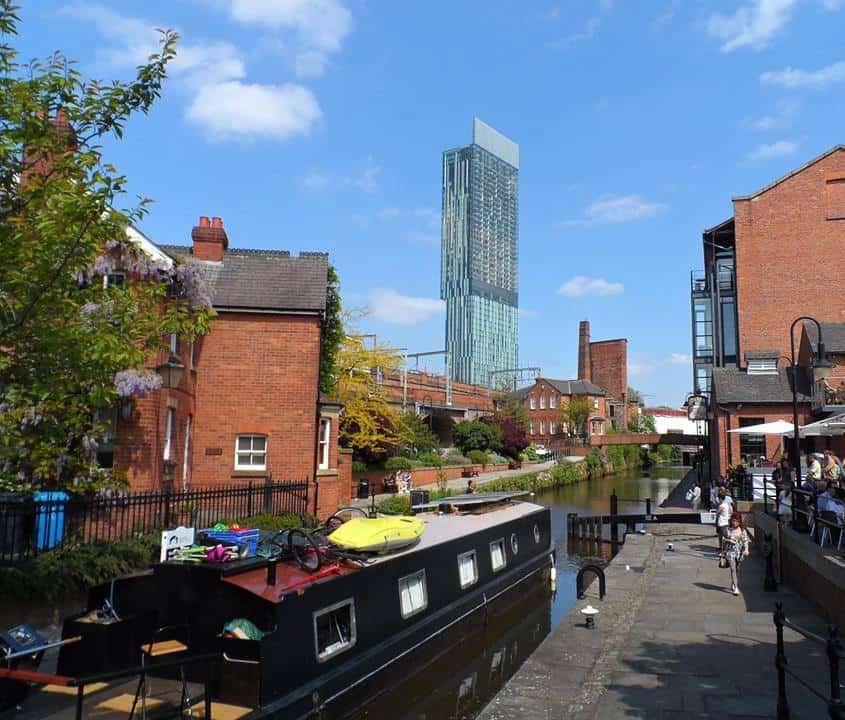 What I want to see and do next time in Castlefield: 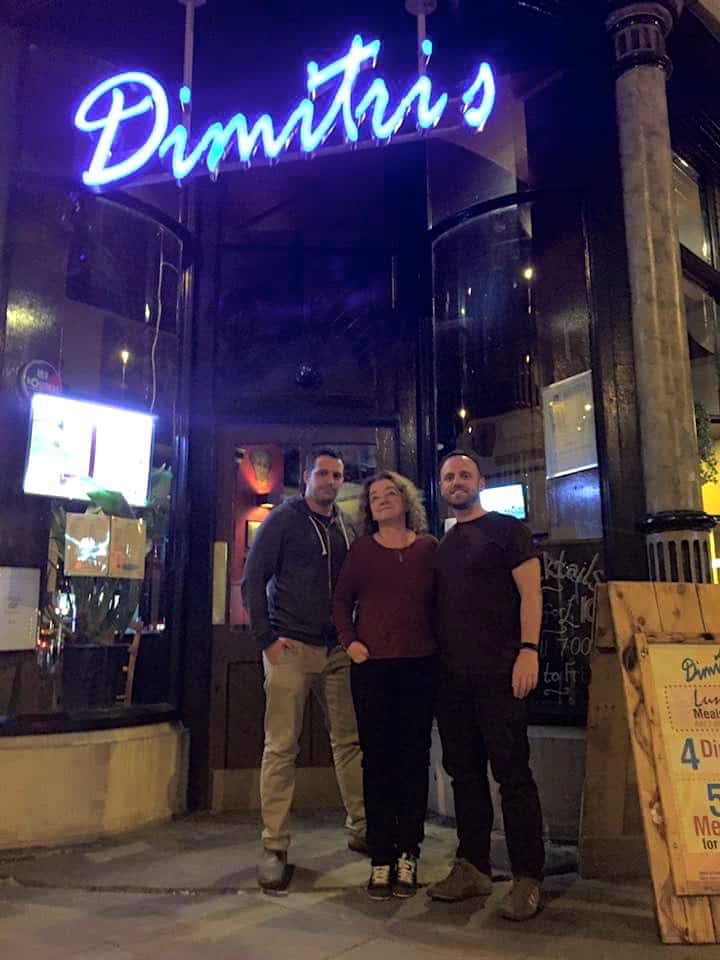 I know, I know, I’ve heard it before: not enough pictures of my good self here on the blog. Well, here you go. I’ll do better going forward. Probably. Maybe.

Other Manchester things to do: The sound of music

No, I’m not referring to Alpine yodelling – although that’s probably possible to experience as well. Next to football, Manchester is about music; fabulous live music. And we’re not only talking hot-tempered Gallagher brothers. Other famous musical Mancunians include I am Kloot (ran into them at the legendary Hotel Pacific in Hamburg a few years ago – lead singer John Bramwell joined Stefanie for a little impromptu Beatles improv), as well as numerous 80s bands: Simply Red, Morrissey, New Order, The Smiths, Swing Out Sister, the Verve, Joy Division… What was it about 1980s Mancs that inspired them all?

What I want to see and do next time in town: Listen to great music, of course. Here are the best venues according to Timeout.

So, that’s half a day in Manchester. Well spent, if I do say so myself. Though I’ve barely touched the city’s surface.

PS: Stay tuned for things to see and do out of town.

Disclosure: I was in Manchester as part of a collaborative campaign with Visit Britain Norway and Visit Manchester. As ever, I retain the right to write anything I want – or nothing at all; my bit of cyberspace, my rules.