Next year – 2017 – sees what is possibly the most important celebration in German history, the 500th anniversary of Martin Luther and the Reformation. On 31 October 1517, Luther posted his famous 95 theses on the church door in Wittenberg.

The theses, you may remember, were in large part a reaction against the Catholic practice of buying and selling indulgences and pardons. 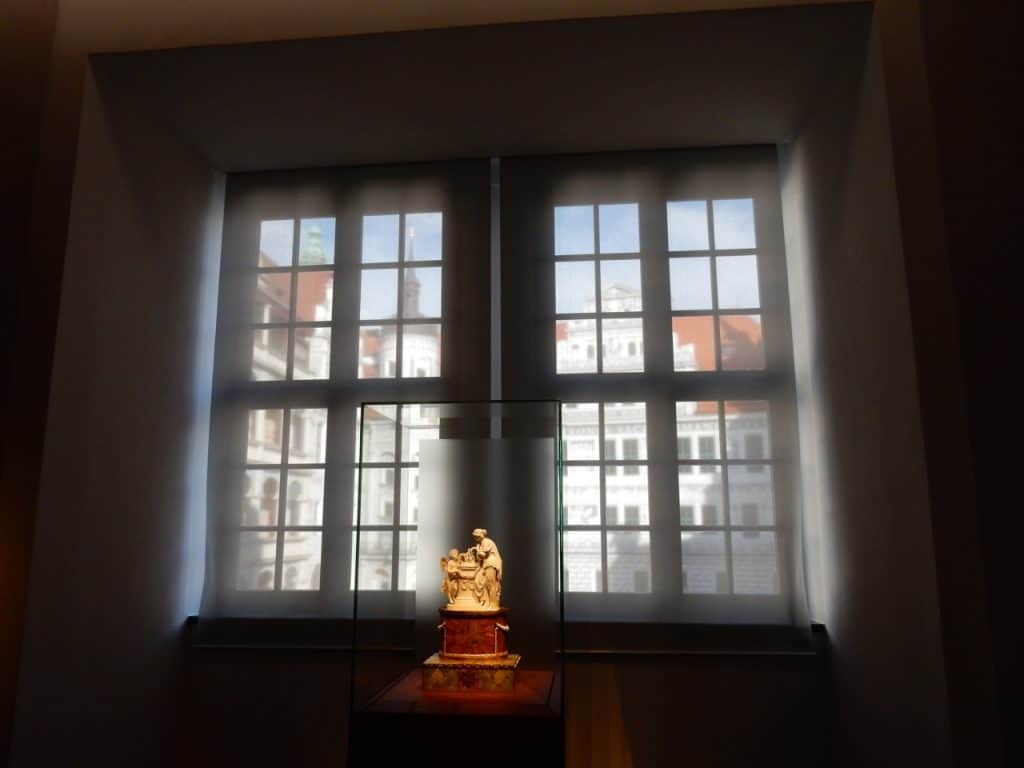 Along with Wittenberg, Eisleben, the city where he was born and died, is probably the most famous location associated with Martin Luther. However, the man went much further, and his journeys to meet and debate his opponents were long and arduous.

Would the Reformation have been such a great success had he remained closer to home? Possibly not. New ideas always take time to gain acceptance. By travelling, Luther gained new followers along the way.

You’ll find traces of the Reformation in much of Germany. In this post, I’ll be exploring traces of Martin Luther in Leipzig, Torgau and Dresden, through the stunning landscapes of Saxony. Come along!

Behind every strong man, as I’m sure you know, is a strong woman. And Martin Luther was no exception.

Enter Katharina von Bora, die Lutherin. So strong was she, Martin affectionately referred to her as Herr Käthe (Mister Kate). 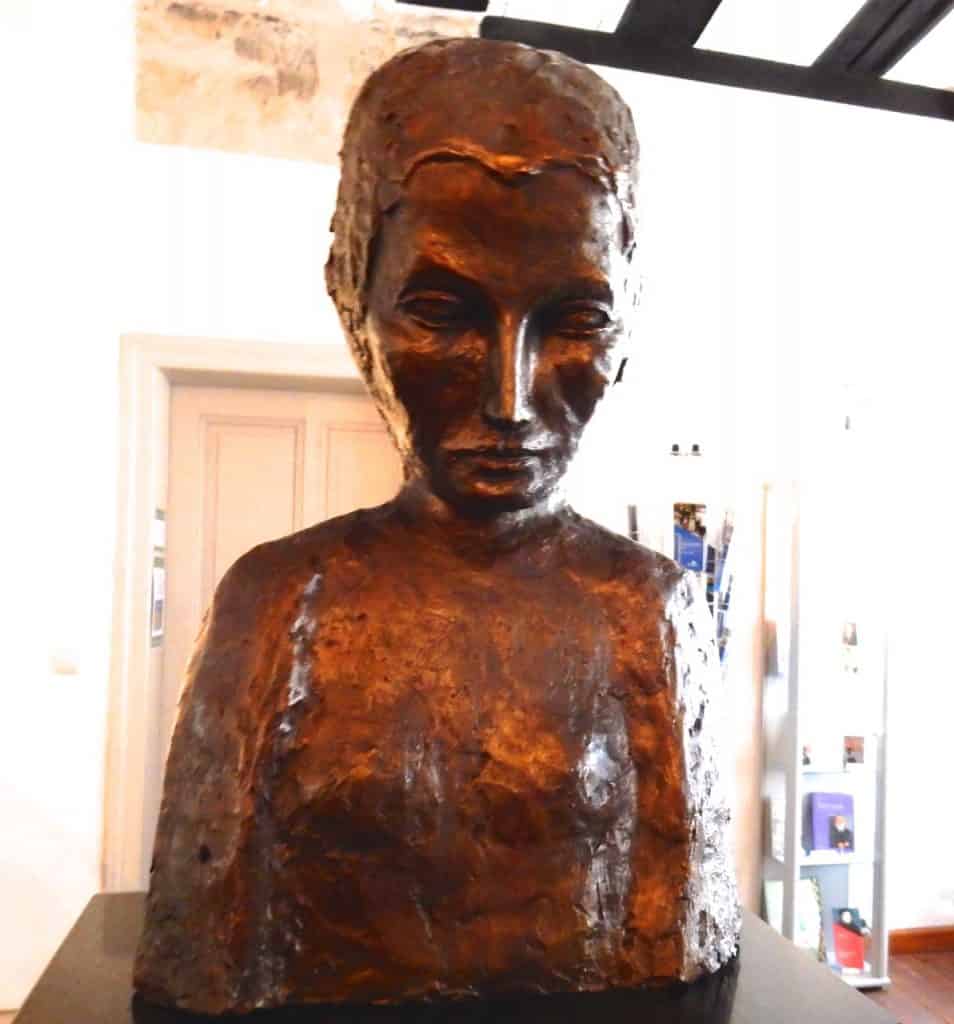 Katharina von Bora was born in 1499 in Saxony. At age 5, she was sent to live in a Benedictine cloister. She remained a nun until she was 24, when she decided the reform movement was more interesting. She got in touch with Luther asking that he help her and several of her friends to escape. Martin was as good as his word and the nuns fled to Wittenberg. 2 years later, Katharina and Martin married.

Katharina is widely known to be one of the most important people of the Reformation. Sadly, not very much is known of her, outside of his writings. However, we do know that she was an administrative mastermind; the CFO of the household. She provided for their 6 children, 4 orphans, and up to 40 students who stayed with them. She ran a farm as well, and a brewery, and a hospital, where she took on the role as nurse as well as administrator.

Luther was faced with forceful opposition, both from the church and from the nobility. Such radical thought was impertinent, of course. Insolent. Right out disobedient. His life was one of controversy, discussions, fights and even escapes. 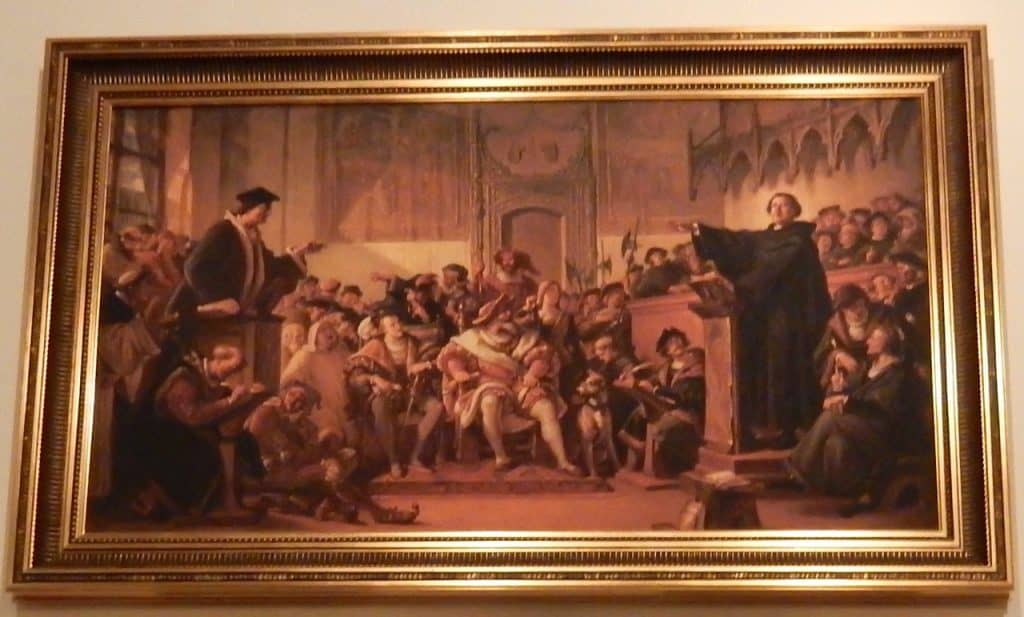 Along with Frankfurt, Leipzig was the most important city in the Holy Roman Empire, and in 1519, the famous Leipzig Disputation took place between Luther and Johann Eck, a Dominican priest. The debate was about selling pardons, methods of penance, and whether the pope’s authority was legitimate. In fact, so heated were the debate, it lasted for 3 weeks. After which Luther was excommunicated.

20 years later, Luther gave a speech in Leipzig again, in the Church of St Thomas this time.

If you want to have a little peek at the venerable preacher in more worldly surrounds, have a look in the Luther Room in Auerbachs Keller. Here, you’ll see a painting, Das Geheime Treffen, depicting a secret meeting between Luther and the owner of the restaurant, Heinrich Stromer von Auerbach, on the eve of 3 December 1521. 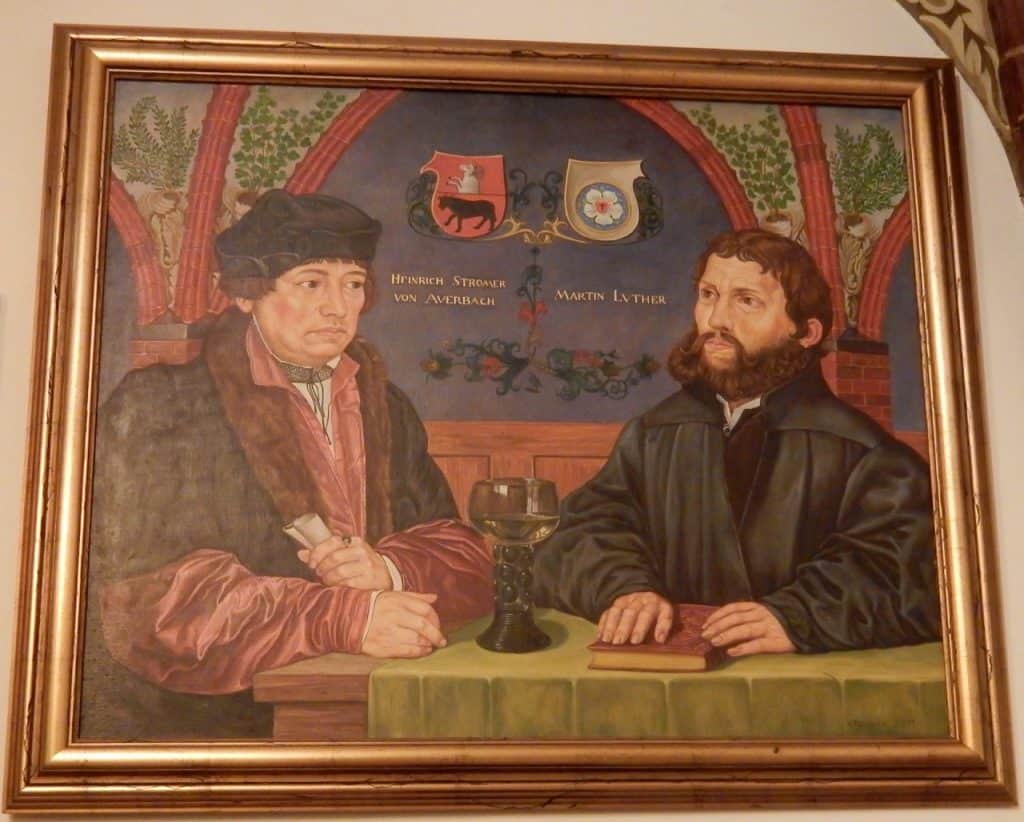 Also in Leipzig, Luther frequented the 15th century restaurant Thüringer Hof, which belonged to a friend of his. And you can, too.

Along with Wittenberg (where Luther posted the 95 theses, remember), Torgau was the political centre of the reformation. So naturally, the first protestant church was built here, in Hartenfels Castle, in 1544.

Torgau is also where Katharina stayed after various escapes, from war, and lastly from the Black Plague in Wittenberg. Arriving in Torgau, she was severely hurt in a cart accident and died a few months later from the injuries. She is buried in Saint Mary’s Church in Torgau. 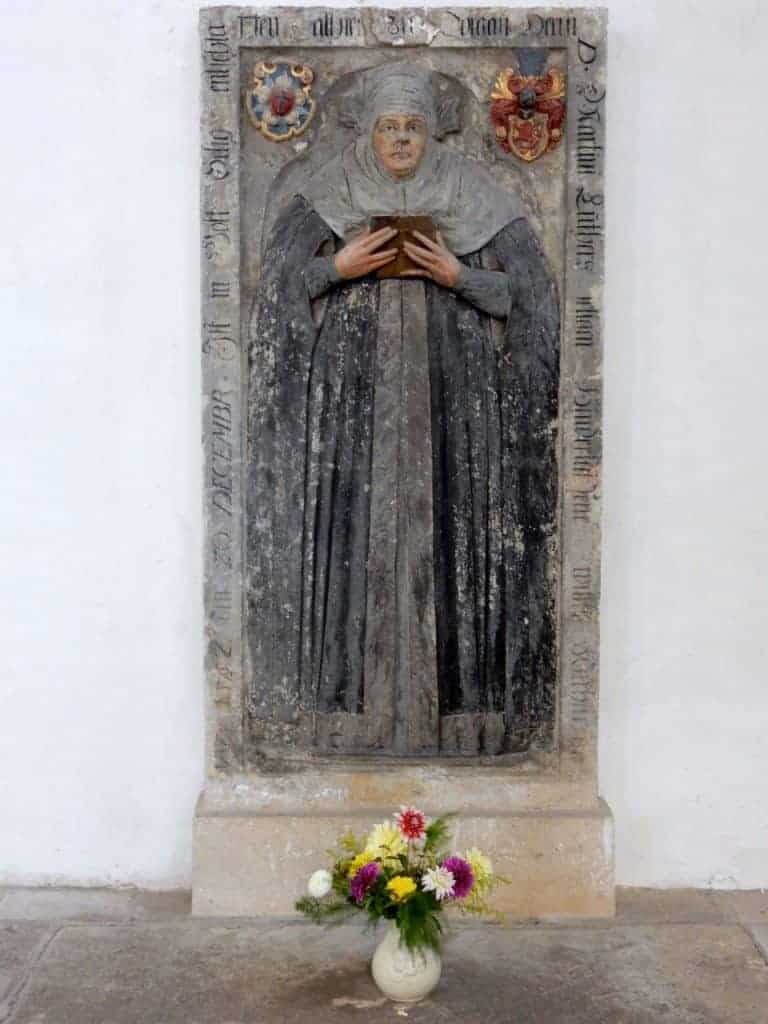 In Torgau, the little house where she lived has been turned into a museum, the Katharina Luther Stube. Nearby, on Katharinenstraße (Katharina street), you’ll also find the restaurant Herr Käthe, named after this magnificent woman.

Katharina was inspiring, energetic and clever and fond of a good discussion, a woman after my own taste. Every year, the city of Torgau celebrates Katharina Day, and a woman is presented with the Katharina von Bora Award for outstanding commitment, often on political issues. 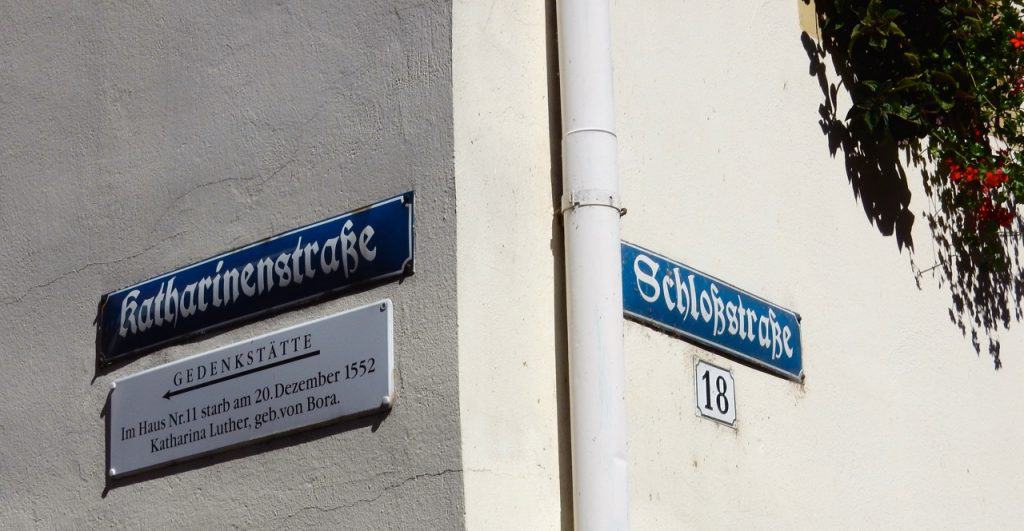 In Dresden, you’ll find the largest protestant cupola in Europe, Frauenkirche, with an impressive Luther statue in front. In the historic green vault at the splendid Schloß Dresden, you can see Luther’s signet ring and drinking goblet. At the book museum of the Dresden’s University library, you can find a hand-written copy of his first lecture as a professor. 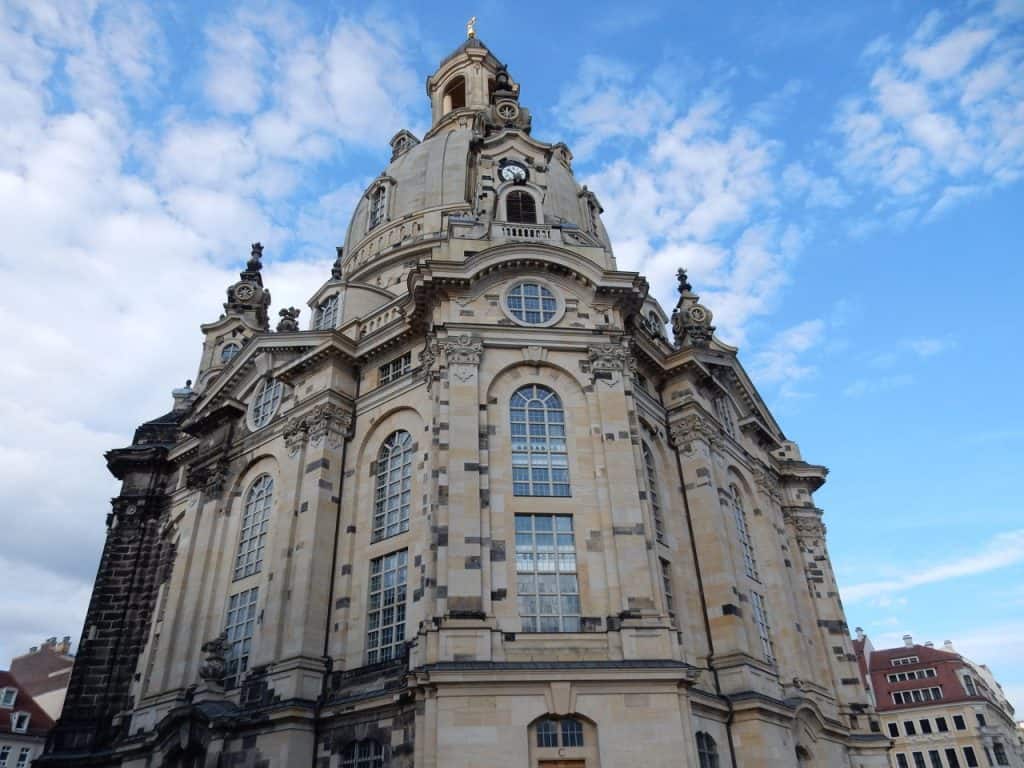 For more on the Reformation Anniversary in 2017, follow along here.

Disclosure: On the trail of Luther, I was a guest of VisitSaxony and the German Tourist Board. All opinions are mine, as ever and always.