World at a Glance: Medieval Rhodes

Medieval Rhodes is beautiful. My favourite thing about this gothic city, however; is that it’s all but impossible NOT to get lost. No new world grid construction here, no straight Roman roads. Within the 4-km city wall, there are hundreds of little streets that don’t even have names. There are gates and squares. Temple ruins, stones, columns and interesting museums. Antiques indoors and outdoors, so much your head might spin.

Fortunately, there’s also galleries, cafes, and restaurants to sit and watch life unfold. And atmosphere. This is one of those places where, despite tourists and hawkers, you get a real sense of history. 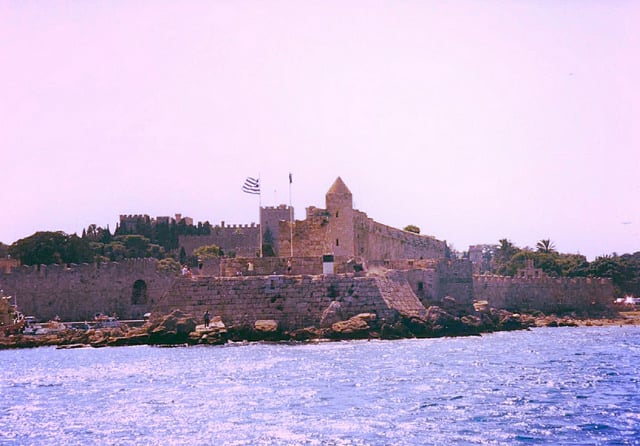 Can you see the fall of Rhodes? We’ve travelled nearly 500 years back in time – to January 1523. The Ottomans offered safe passage and the Knights left with the remaining Christian citizens. They built the city, yet they’d rather leave than live under Turk rule. Many Christians died during the siege. And many, many more Turks. Can you see their ghosts? Bit difficult that. Too much present life.

We amble around medieval Rhodes with no plan or purpose. That works. But if your time is limited, you may want to think about what you’d like to see. One thing’s for sure. You can’t see the colossus.

Of the original seven wonders – those of the ancient world – only one remains, the Great Pyramid at Giza in Egypt. The others were scattered around the Eastern Mediterranean, including the Colossus of Rhodes. 31 metres tall, straddling the harbour, boats passing between his bronze legs. Or so the story goes. Apparently, plans are afoot to rebuild him. Hm…