Notaries Public in Poland. There’s something I wouldn’t have thought I’d ever google. But I have – and this is what I’ve learned:

According to one of Poland’s many notaries,

A notary acts as a person of public trust, they safeguard the security of legal transactions and are obliged to care about the reasonable interest of all the parties to the transactions performed before them. Therefore it is hard to overestimate the role of a notary in the Polish system of private law and every agreement prepared by them becomes binding law for all those who signed it. For that reason the motto of Polish notaries „Lex est quad notamus” – what we write becomes the law.

Important stuff, to be sure. But why the sudden interest in this profession? 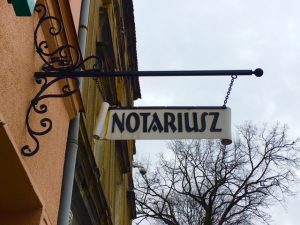 Well, I was in Poland a few weeks ago, having a look at one of the country’s 18 world heritage sites. And as I wandered through medieval Toruń, what struck me once, then twice, then practically around every corner, was the proliferation of notaries.

The next thing I noticed was the odd neighbours. Plenty of the adwokat/notariusz – lawyer and notary. That’s to be expected. But here’s a tattoo parlour/men’ clothing shop – and notary; over there is an optometrist – and notary. There is a dance studio – and notary, and further along the street, a scantily dressed, but slightly intimidating-looking girl brandishing a whip, offering accessories, lingerie, aphrodisiacs and DVDs – next to a notary…

Other intriguing combinations abound as well: fashion shop and currency exchange, for example. Walking up and down the streets of Toruń, digging into this quirk, could easily take the whole day. Which sadly I didn’t have. So let’s get into the serious stuff: heritage and astronomy. 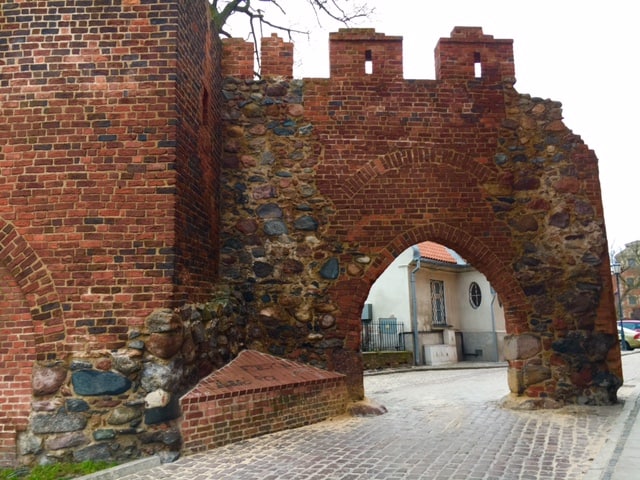 Medieval Toruń’s most famous part is the Teutonic castle, built in the 13th century by those infamous knights, on account of ’em wanting to colonise and spread Christianity to Prussia. Soon business prevailed (doesn’t it always…) and Toruń became one of the dominant Hanseatic cities. 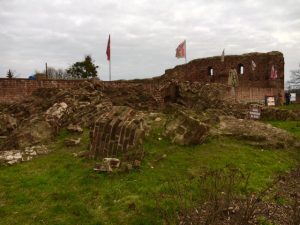 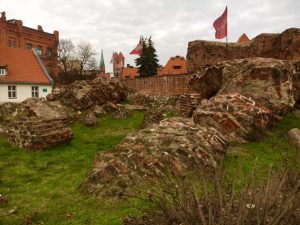 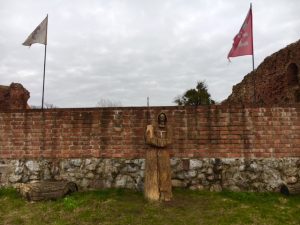 In addition to the castle, there’s the old town and the new town. Not that the new town is new exactly, it was founded in 1264! As for the reasoning behind the inscription, UNESCO has this to say:

An exceptionally complete picture of the medieval way of life is illustrated in the original street patterns and early buildings of Toruń. 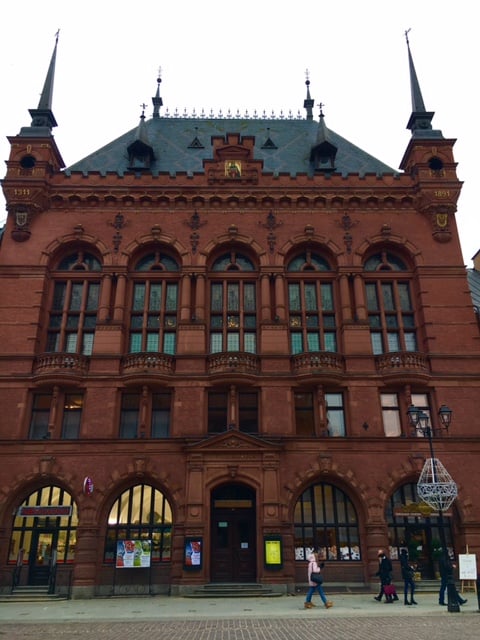 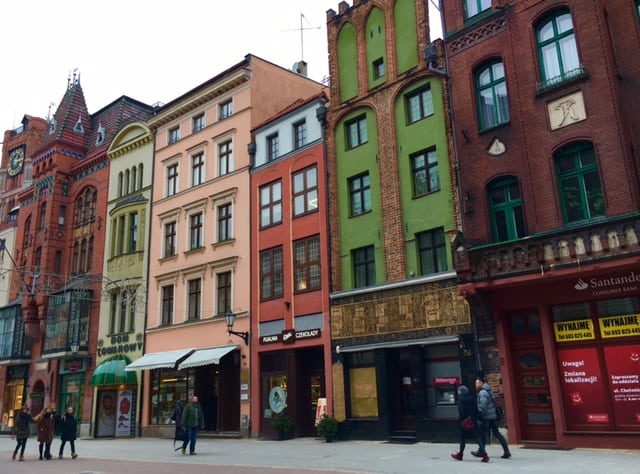 Both parts of town have tall brick houses: Gothic, Baroque and Renaissance. Many of them are very well preserved, almost intact – including the one that saw little Nicolaus Copernicus being born in 1473. Or so the story goes. Always difficult to verify seemingly insignificant details like a random birth 545 years ago. Who knew this particular little one was to be one of the world’s most famous astronomers!

Mover of the earth, stopper of the sun and heavens

This is the man who dared oppose current thinking and propose that the sun, rather than the Earth, is the centre of the universe. But Nicolaus wasn’t only an astronomer. Like Leonardo, he was a man of many skills, a polymath and a polyglot: a mathematician, a doctor, a translator, a lawyer, a priest, an economist (he proposed currency reform!), a diplomat; in short, an all-round homo universalis.

In Toruń, the Renaissance man is memorialised with this monument by the Town Hall, which also seems to be a local meeting point. He is dressed as a medieval scholar, holds an astrolabe in his hand and points his finger heavenward. Around the foot of the statue, you can see the inscription Nicolaus Copernicus Thorunensis, terrae motor, solis caelique stator.

Have a date? Let’s meet at the mover of the earth and stopper of the sun! Has a cool ring to it, doesn’t it… In fact, it’s a title I’d rather like to have myself. 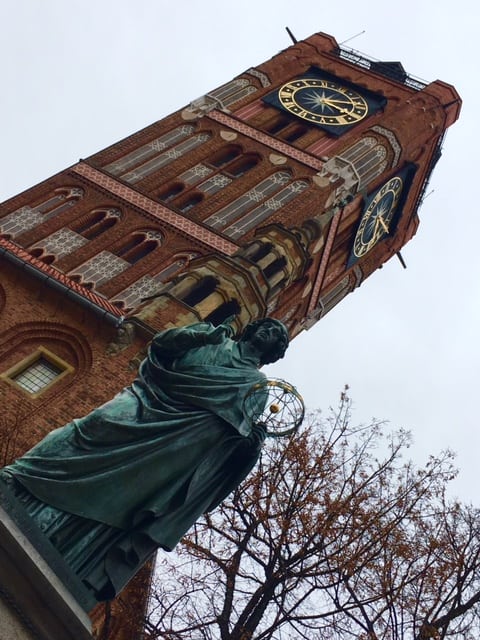 In Toruń, you cannot miss this donkey, even if you might want to. This brass ass is set up in the same spot where a wooden donkey stood in medieval times. A donkey with an ominous past. If you broke the law, you were strapped to the donkey for an entire day – and flogged, of course subject to the ridicule of anyone passing by. Pain and humiliation.

PS Don’t sit on it! It will bite you. 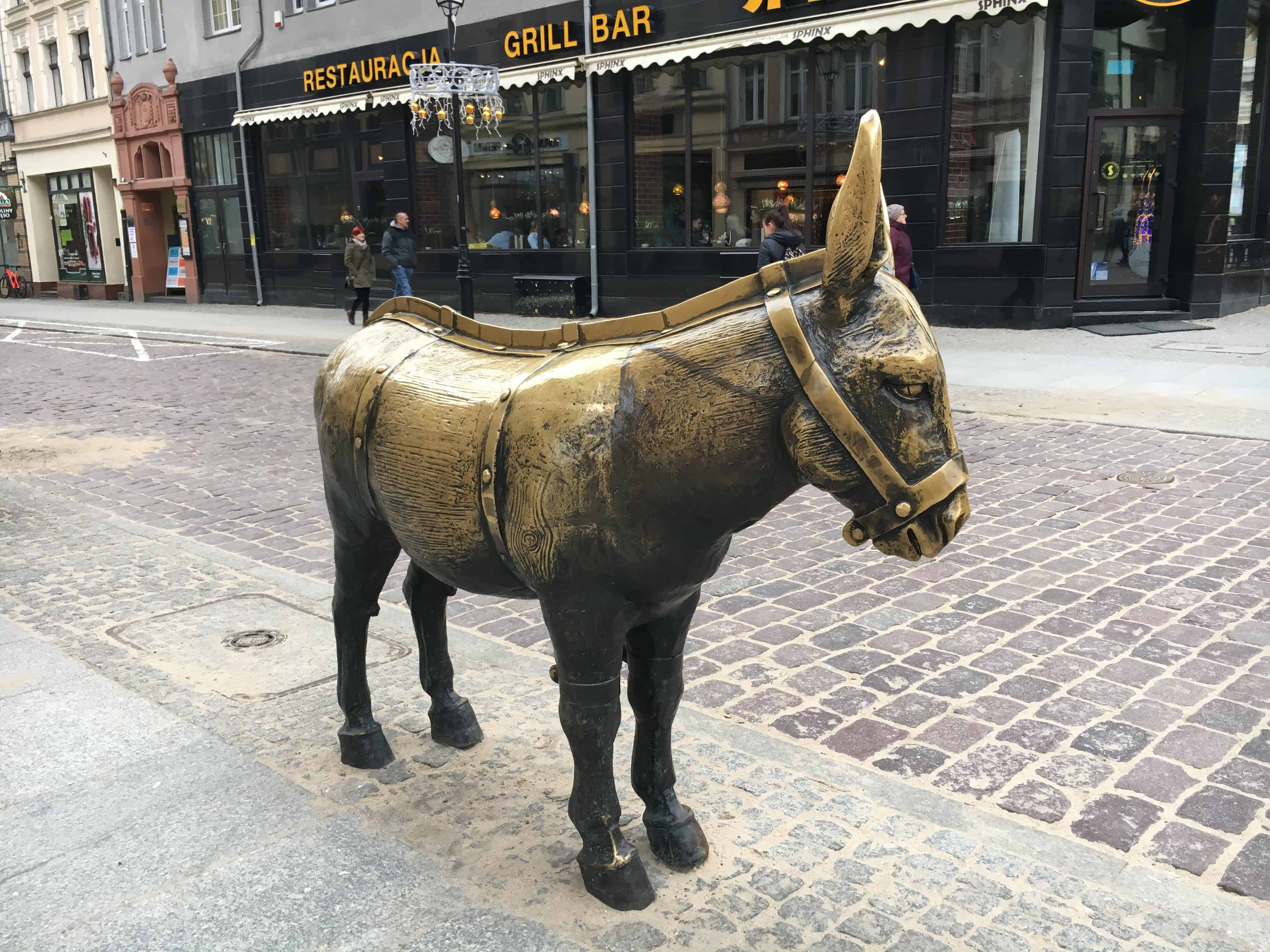 Much cheerier then, is this colourful street art I happened to walk past near the castle ruins. I especially liked the dragon. And the merry men. 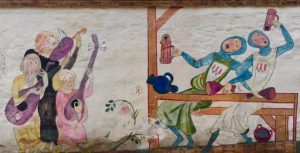 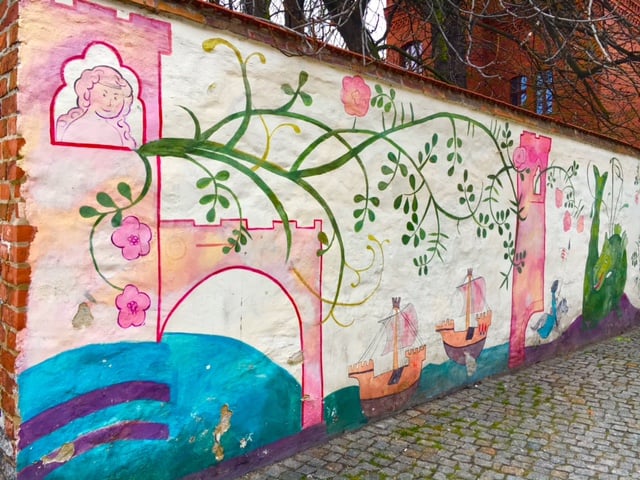 And finally, you cannot visit Toruń without trying the local specialty, Pierniki toruńskie – soft gingerbread biscuits. There are references to these as far back as 1380. The old recipes called for honey and vodka, sugar and spice – everything nice. None of that to be seen 638 years later, at least I didn’t find any. Lots of other varieties though, I can recommend the dark chocolate and orange ones.