World at a Glance: Medina of Tunis 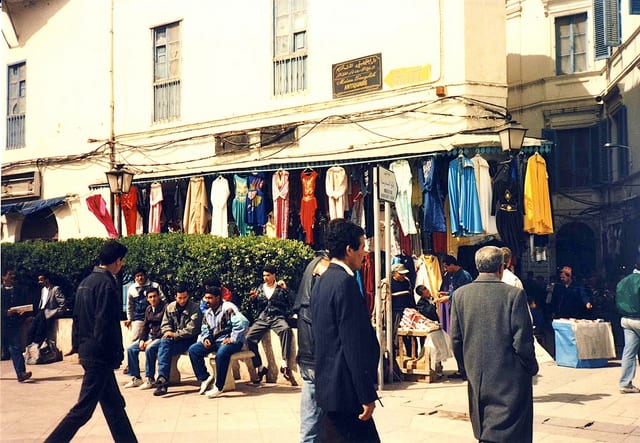 The Medina of Tunis on a brilliant April day in 1992. Practically vintage, isn’t it?

Tunis is a fascinating city with an equally fascinating past which is attested by the hundreds of palaces, residences, mosques, madrasas and mausolea you’ll find in the medina, the original Arab town inside the Tunisian capital. Back in the day, between the 12th and the 16th centuries that is, this was one of the most important cities in the Islamic world.

Fascinating though these buildings, shrines and monuments are, I feel I’ve written a lot about Islamic monuments lately. Somehow, this retro photo of one of the chaotic markets within the medina appealed more to me today. It also reminded me of a delightful afternoon of wandering through the maze, of chatting, joking and bargaining with traders here, and drinking numerous cups of tea. So many cups of tea. 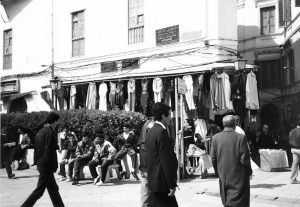 Here it is again, looking even more vintage. You’d think it was nineteen-SIXTY-two.

The thing to do here is to have plenty of time and nothing particular on your mind. Just cruise along, buy some dried fruits, barter a bit, and just have fun. Tunisians are super friendly.

The main thoroughfares of the souks are a bit boring (lots of souvenir sellers), so as always, step off the main track and into the narrow lanes and side passages for a proper look. Some of the shops have rooftops with fab views over the medina, but climb up at your own peril. Not that it’s dangerous up there, but you won’t be able to get out of the shop before they’ve tried to sell you a carpet, say – or perhaps a bottle of scent or a bar of soap.

Tip for the medina (and for life in general really): Chill out! Take people as they are and don’t sweat the small stuff.

World at a Glance is a series of short articles here on Sophie’s World, normally with just one photo portraying curious, evocative, happy, sad or wondrous, unexpected little encounters. (And yes, it is actually just ONE photo).