Melk Abbey and the Wachau Valley (Day out Vienna) 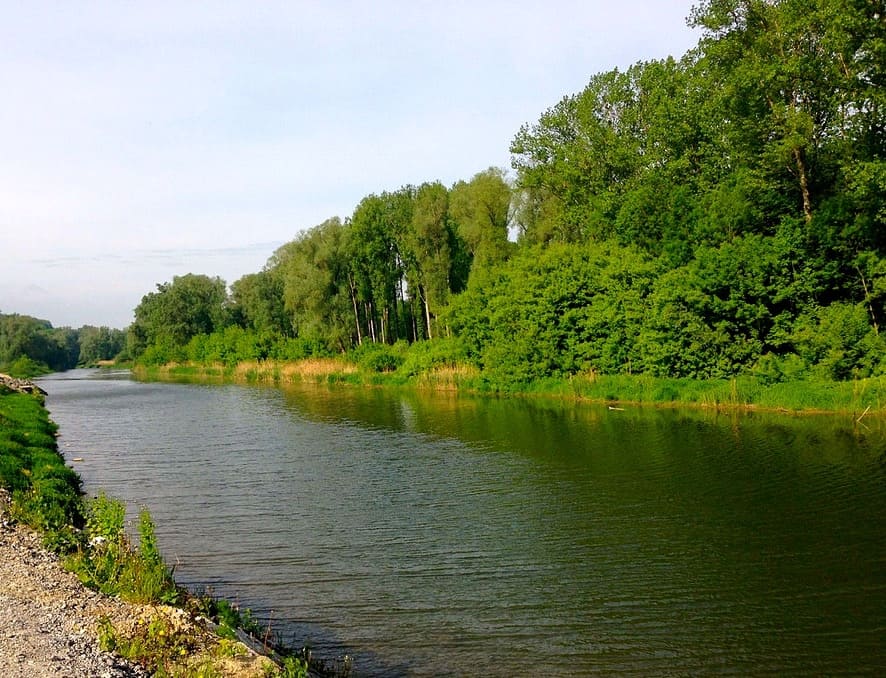 Just like the landscape of the Upper Middle Rhine Valley is protected by UNESCO, the Danube has its own area of special significance: the 40-km Wachau Valley in Austria, between the towns of Krems and Melk. And like that Rhine stretch, Wachau has hilltop ruins, castles, vineyards, historic towns and quaint villages. As UNESCO calls it:

a landscape of high visual quality.

One of the villages along Wachau is Willendorf. Sound familiar, but can’t quite place it? 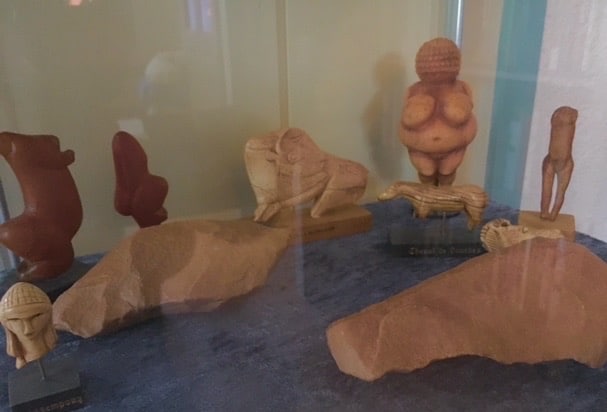 I snuck this pic of one of the shelves in Alexandra’s ancient artefacts cabinet (yes, I have a geeky kid), that might jog your memory. See the bosomy chick in the right hand corner? This, ladies and gentlemen, is Venus of Willendorf, 28 000 years old! Approximately.

Theories abound, naturally. Was she created as a fertility fetish? A depiction of a goddess? You’ll notice Venus is faceless. I quite like the suggestion it might have been a self-portrait. If seen from the vantage point of our own eyes looking downwards, is this roughly what we look like? Go on girls, have a look!

The self-portrait theory makes sense in that there were no mirrors. Though perhaps dampened by the fact that Stone Age women surely could see themselves in the waters of lakes and rivers, pools, ponds. Well, who’s to say…

This little digression is to show that the landscape of the Wachau Valley has been inhabited since Palaeolothic times. 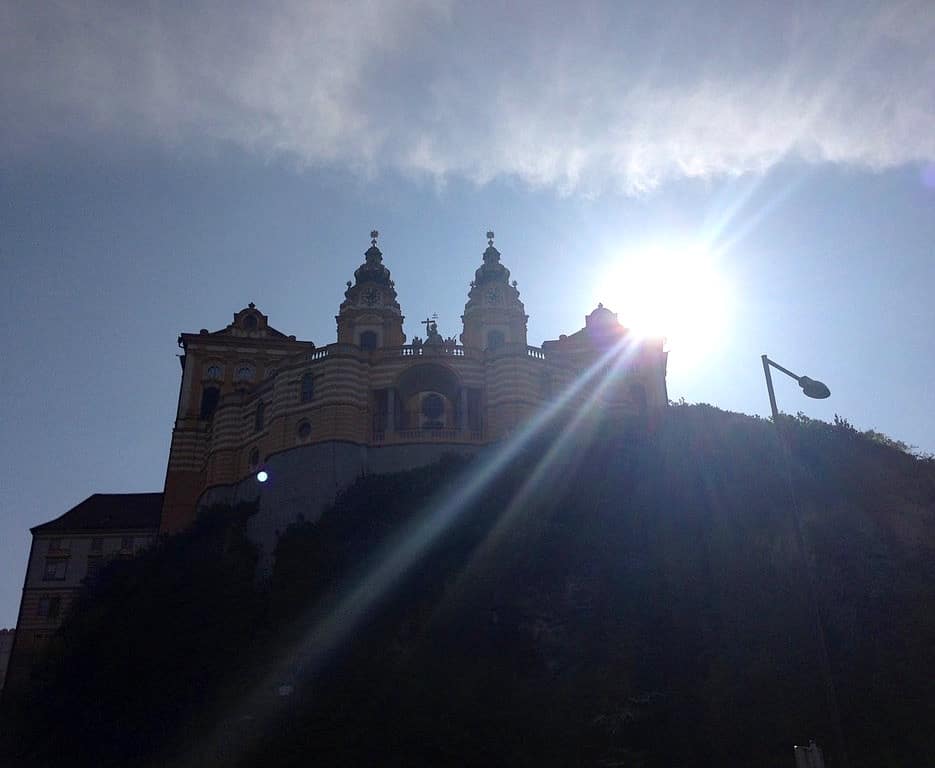 However, my main interest in Wachau is Melk Abbey, one of the architectural masterpieces here in the valley. Remember Umberto Eco’s 1980s gothic thriller The Name of the Rose? How the monks William of Baskerville and Adso of Melk find a huge secret library? Well, Adso’s name is a clever allusion to the famous library right here at Melk Abbey.

Do you have a Euro-coin, by the way? If you see something resembling a view up a facade, and twin baroque towers on it, then you have the commemorative Melk Abbey Euro. (A couple of years ago, I visited the monastery complex at Maulbronn – also a motif for a Euro coin. This could easily become a new quest.) 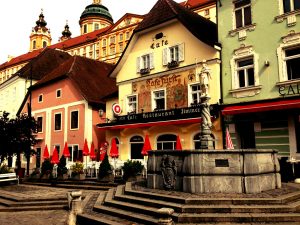 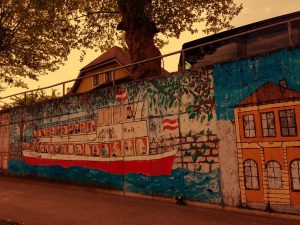 Walking from the railway station into the little town of Melk, you’ll soon spot the Abbey, perched high on a rocky crag. The views from up there must be nothing short of fantastic, you think as you wander ever closer. And you’ll be right. But the palatial building is a fantastic view in itself.  Long, slim, yellow, with a lovely, supremely clean courtyard. Exquisite! 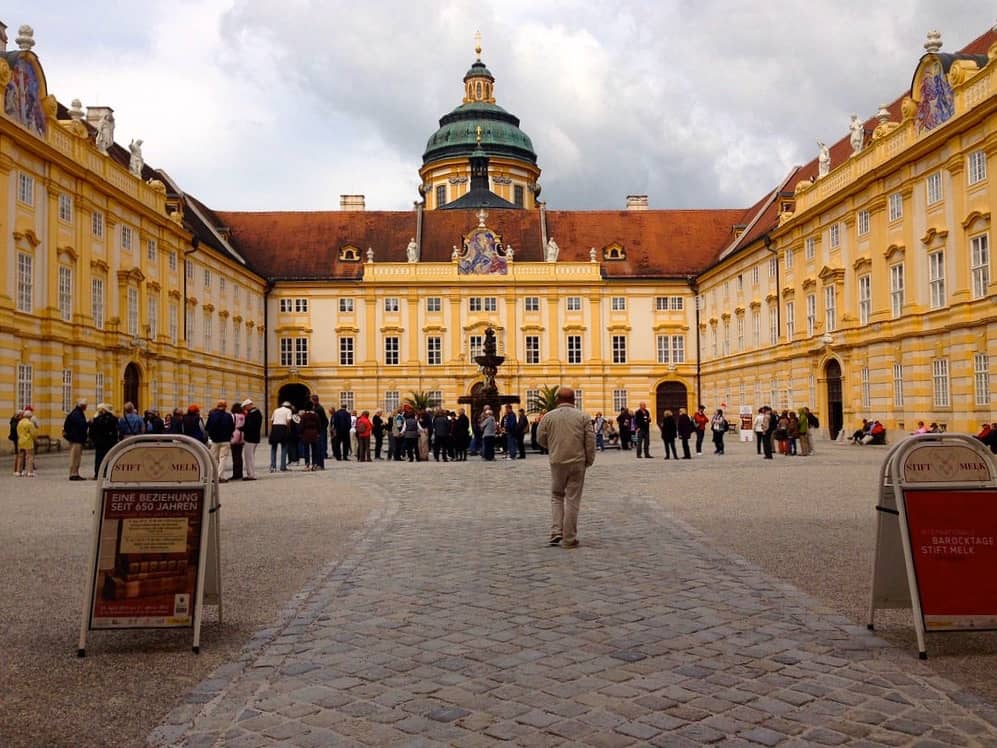 For more than 1000 years, monks have been living and working in this building. Inspiring surrounds!

In the Abbey Museum, you’ll find multimedia displays covering the abbey’s nearly 1000 years’ existence. And a reusable coffin! This is something I’ve considered, actually. Bad for the funeral industry, perhaps – but it makes no environmental sense to burn a perfectly good coffin. Why not have reusable ones?

Inside, you’ll also find the mind-blowing Marble Hall. It’s pretty, it’s pink, and it has an upwardly curving ceiling covered in Troger’s frescoed angels… oh, wait a minute… the ceiling isn’t curving at all. It’s completely flat! A clever and beautiful illusion.

What? No photos? Afraid not. My camera shutter suddenly decided to take a prolonged holiday. And the phone, well, I’ll come clean: ran out of battery and no power bank. Such an amateur!

I’m simply going to make an exception to our normal policy of only using our own photos, and borrow the following three from Creative Commons: 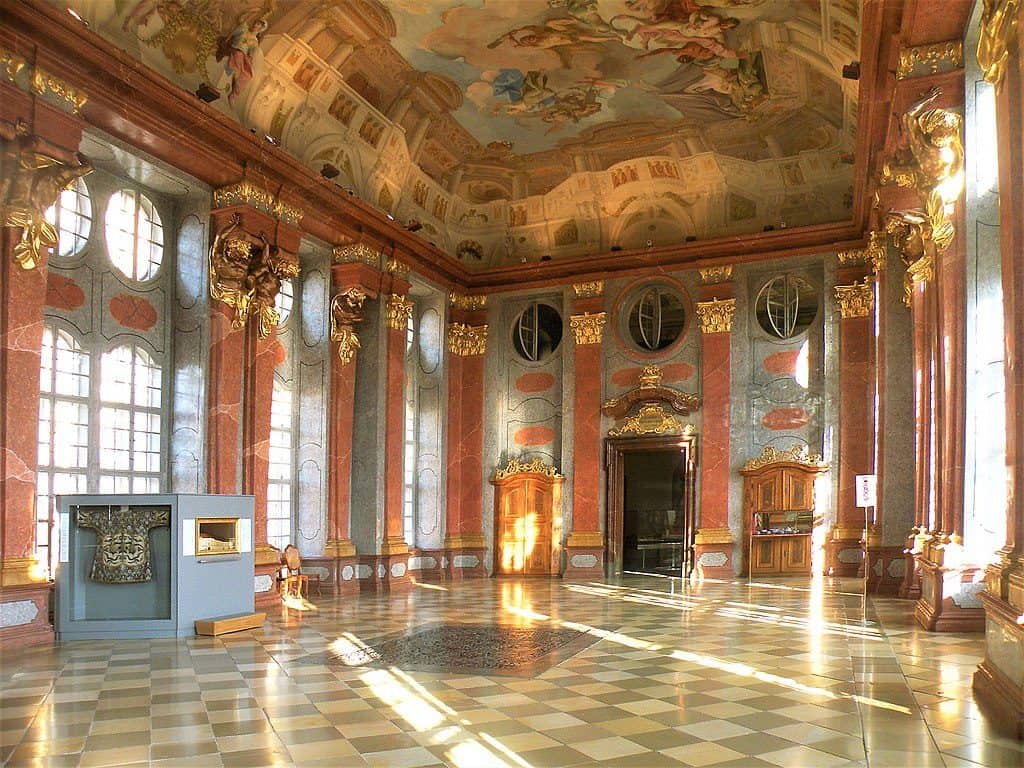 This one of the Marble Hall is by Vitold Muratov.

Also pink and simply stunning, is the Imperial staircase. This winding stairway seems to go on into infinity. I should return to Melk Abbey solely for the sake of photographing it a thousand times, from up above, from down below… 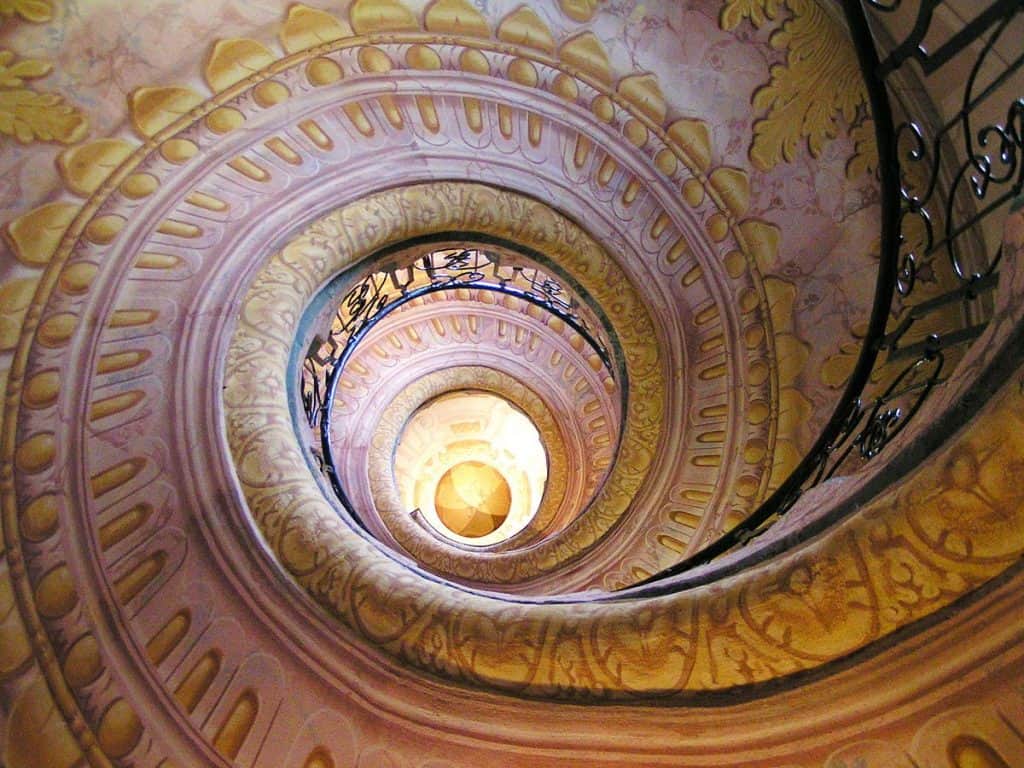 Meanwhile this one is by giomodica.

Then there’s the library! High on the list of the most beautiful rooms I’ve ever seen: grand, graceful, golden, glittering, glorious, with gorgeous globes. And 16 000 golden books! 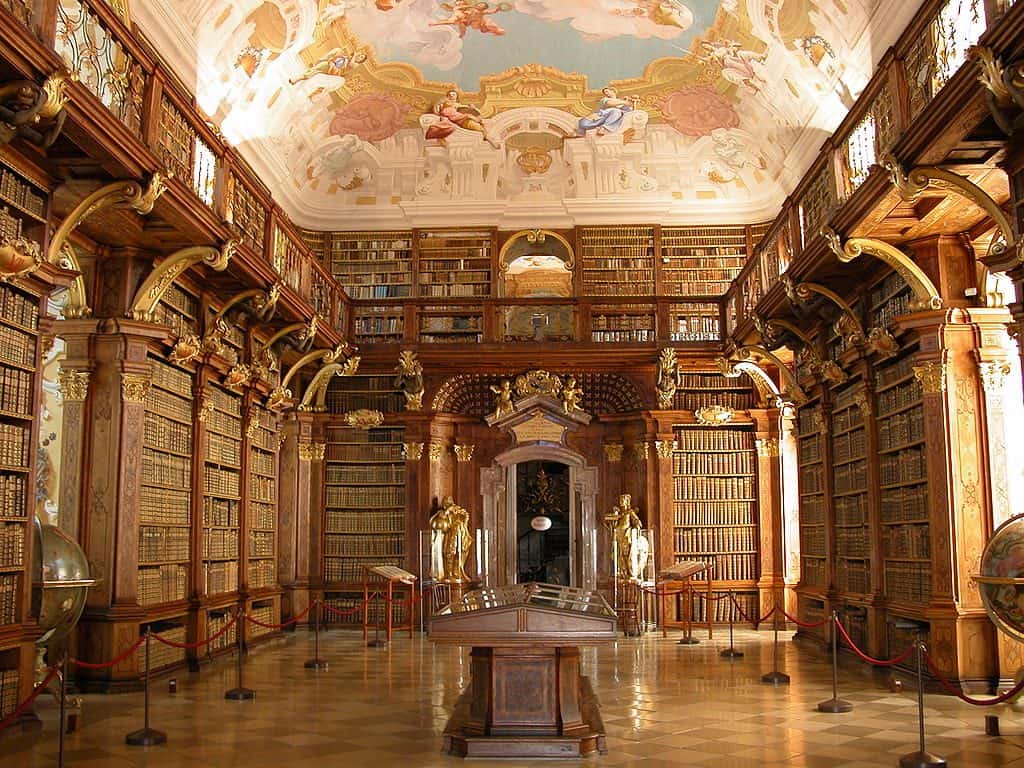