City panorama from the top of Christ’s Resurrection Church

We like second cities here on Sophie’s World. They’re frequently just as interesting as the capitals. Think Aarhus, Gothenburg, Munich, Manchester or Birmingham (the jury’s still out on that one). Sometimes, second cities are even more interesting than the capitals, or at least more unique, like Antwerp, Bergen and Barcelona.

Today, we’re in Lithuania’s second city. Although, Kaunas was not always second. As a consequence of the Vilnius Dispute early in the interwar years, a new capital was needed, and so a small town was changed into a major city, practically overnight. For nearly 20 years – the years between the two world wars – Kaunas served as interim capital of Lithuania.

The Vilnius Dispute is perhaps not the most familiar event of the interwar years for most of us. The conflict was also known as the Polish – Lithuanian War. In a nutshell, Poland occupied Vilnius in 1920, and kept the city under Polish control until the dawn of World War II.

Back then, Modernism was a new and trendy artistic and architectural style. It was a philosophical movement as well, intended to create something new for new times, times of industrialisation, urbanisation, emerging technology, and yes, also war. We will stick with just the architecture for now.

I find the minimalistic thinking of the early 20th century fascinating. Here on the blog, we have frequently talked about Modernist art and architecture and its sibling forms. We have looked at Bauhaus works of Walter Gropius and Mies van der Rohe in Germany. We have explored Gerrit Rietveld’s de Stijl in the Netherlands. And we have taken a Modernism walk with Context in Barcelona, with lots of Gaudi, of course, but also Josep Puig i Cadafalch, and Lluís Domènech i Montaner of Hospital de Sant Pau fame.

European Capital of Culture 2022 – and more!

In its time as Lithuania’s capital, Kaunas was known as Little Paris, because of the active academic and cultural life. Stylish fashion and lively cafe culture was the order of the day. Most important though, was the fabulous Modernist architecture and design. It still is.

Kaunas is home to some of the best examples of Art Deco architecture in Europe, and the city has received several awards, including the European Heritage Label, which means it is seen as a milestone in the creation of present-day Europe.

UNESCO has designated Kaunas as one of 40 Cities of Design, along with the likes of Berlin, Graz, Cape Town, Dubai, Buenos Aires, Singapore and more. This is part of the Creative Cities Network, introduced to encourage cooperation among cities recognised as having a focus on creative urban development. UNESCO has also added Kaunas to the Tentative World Heritage list.

As if all of that isn’t enough, Kaunas is selected as one of three European Capitals of Culture for this year (2022) as well, together with Esch-sur-Alzette in Luxembourg and Novi Sad in Serbia.

Urban planning then and now

When Lithuania’s new interim capital was constructed, new infrastructure was needed: government offices, public service buildings like schools, community centres, courts and libraries, blocks of flats for all the new folks in town, etc. Thousands of buildings were set up, most in the new style. 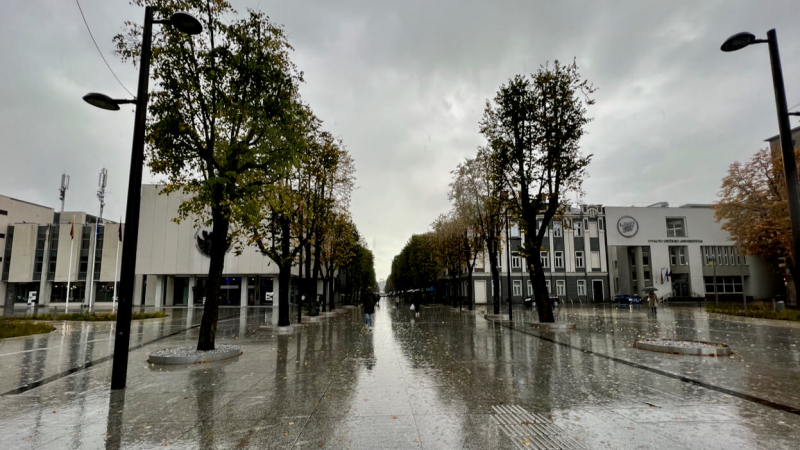 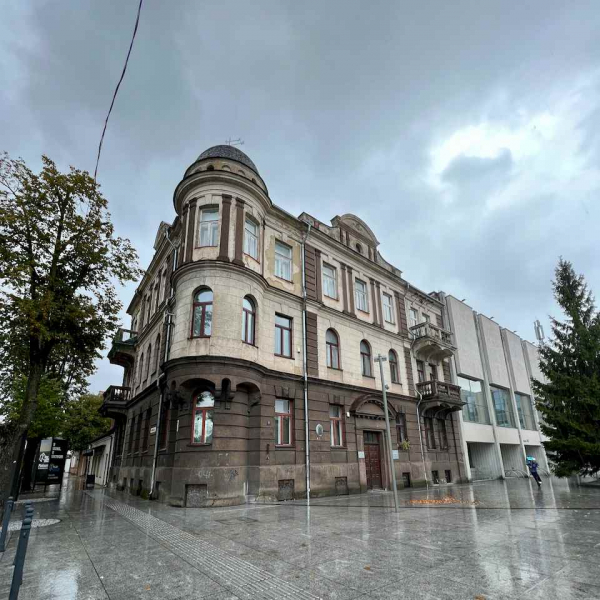 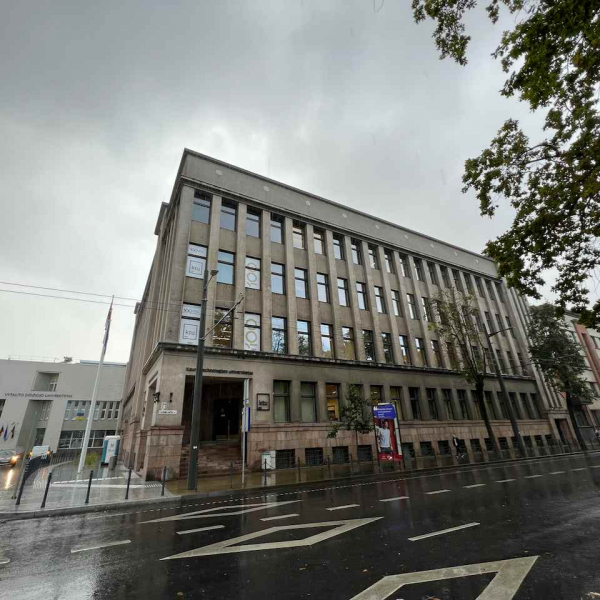 Many of the buildings are within easy walking distance of one another. 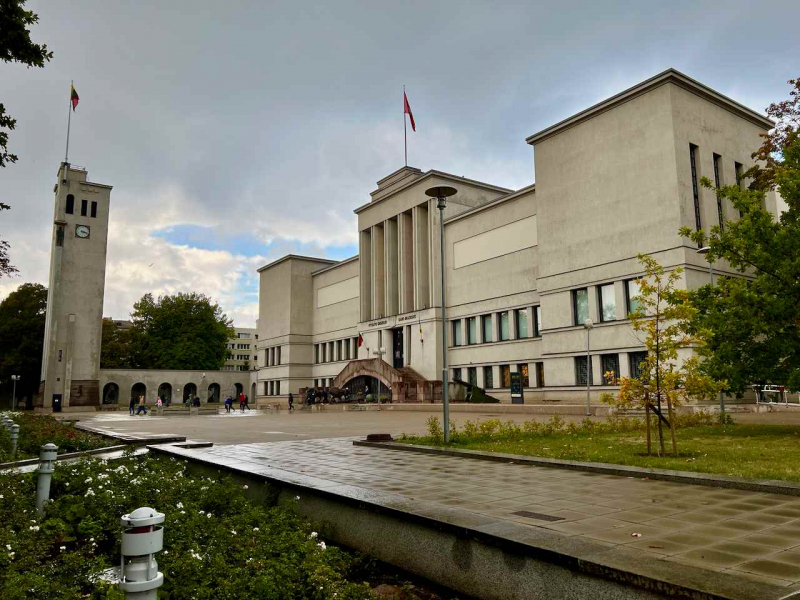 Outside the war museum is a fire altar; next to it are the remains of an unknown soldier who died in 1919. 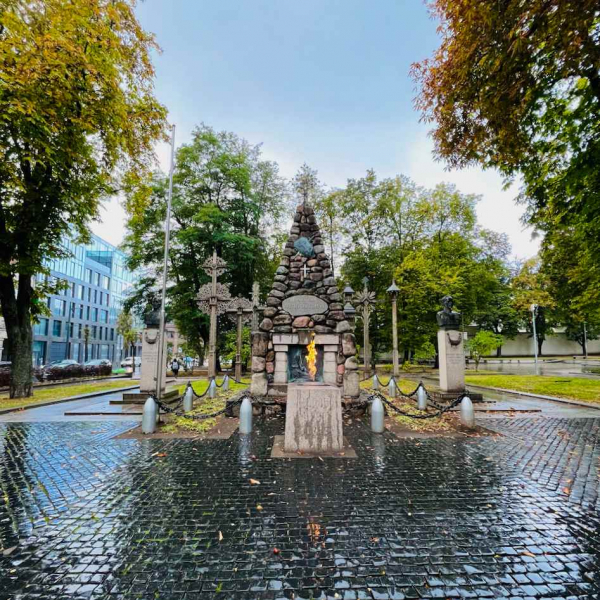 Not even the heavy rain today can put out the eternal flame.

Don’t miss the monumental Christ’s Resurrection Church towering above the city. To get there, you can take a cable car up to Aleksotas Hill. Well, normally you can. 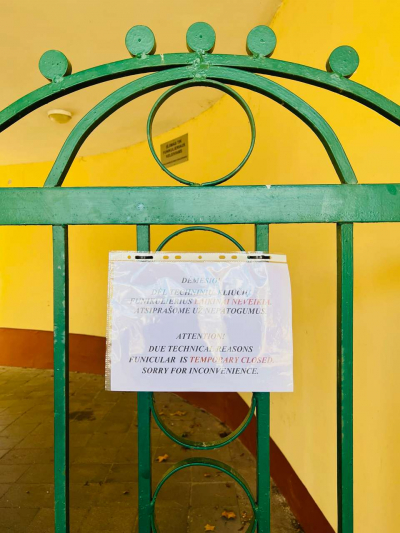 The Aleksotas Funicular is another example of Modernist architecture. Sadly, it is not to be seen on this wet autumn day. But we can use our feet. A brisk walk up the stairs to the top of the hill means we will appreciate the panoramic views even more, no? 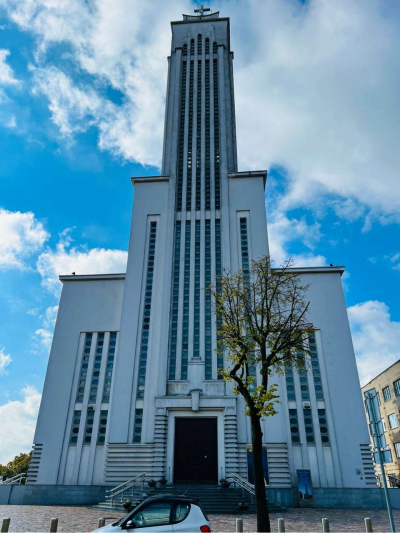 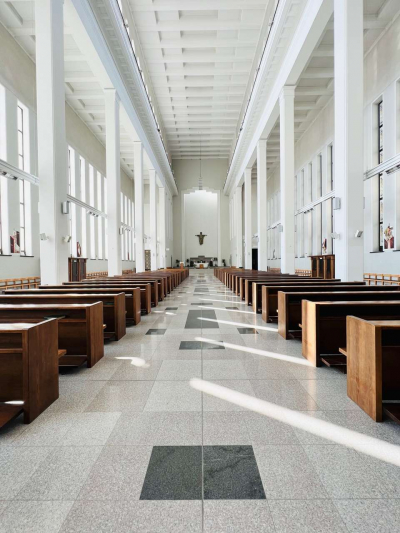 Christ’s Resurrection Church is 70 metres tall, and bright white, inside and out. Bit of a cult palace, really. During the Soviet years, atheism was the only acceptable worldview. The church was used as a radio receiver factory then.

Since we’re already climbing stairs: for an even better view, go up on the church roof. You can climb the 150 steps – or take a lift.

Not everything is Modernism

About 100 years after the Modernism movement, Kaunas’ spacious Unity Square is focussed on how space can serve the community of today. 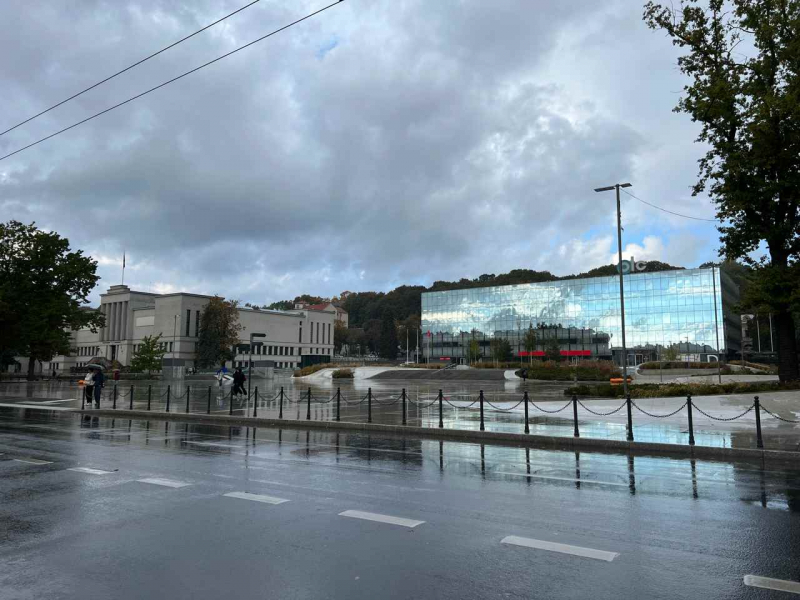 Buildings from different eras next to each other on Unity Square. 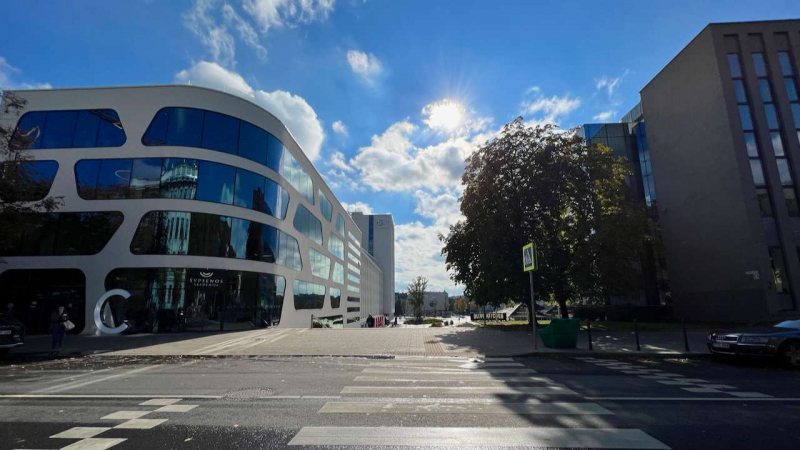 I’d say Kaunas is one city to watch.

Also view from the church roof