As I’m standing on the shore, looking out over Mondsee, the large Alpine lake with the mystical name, I can’t help but think of a woman of caliber.

The woman I’m thinking of is fictional. Her name is Lisa Engel and she is – or rather, was – a police commissioner in an Austrian turn-of-the-century TV series called Eine Frau mit Kaliber. For the Norwegian audience, the series was renamed Mordene ved Månesjøen, meaning Murders at Moon Lake. More mystery to that title, don’t you think?

Without prejudice to Lisa Engel, I kinda felt Mondsee was the main character. And of course I had to go and have a look at this place for myself. That was in 2002. 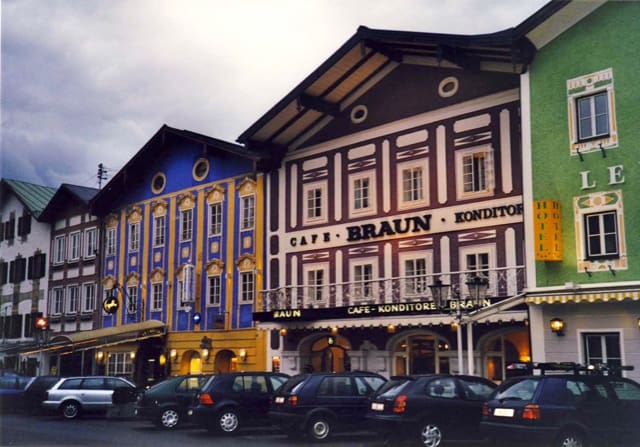 20 years later, I was in the neighbourhood (Mondsee is only 30 km from Salzburg) and decided to have another look. 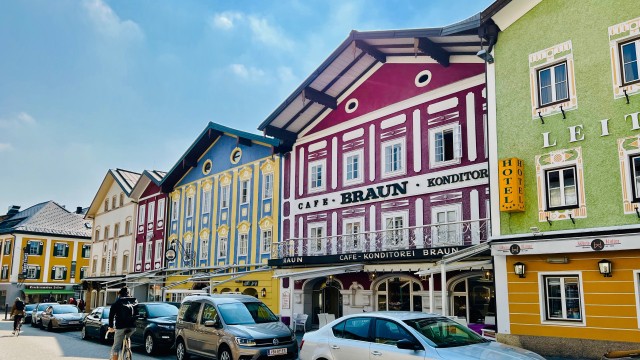 Not much has changed, except the cars.

Murders notwithstanding, Moon Lake does sound mysterious and romantic, doesn’t it? But how did it get its name? Legend attributes this to a Bavarian duke named Odilo:

One day, Duke Odilo was out hunting with his wife and several friends. As night set in, he somehow got away from his hunting party – and got lost. (I feel him; I get lost, too. All.the.time.) Meanwhile, poor Odilo stumbled about the rocky terrain, and nearly fell off a cliff. But he must have been good in a former life, because karma saved him: the full moon appeared from behind the clouds, shining down upon the lake before him. ‘Thank you, almighty moon,’ I imagine Odilo thought. ‘In return for saving my life, I will build an abbey on the banks of this lake, and I shall name the lake Mondsee, Moon Lake.’

And so he did. 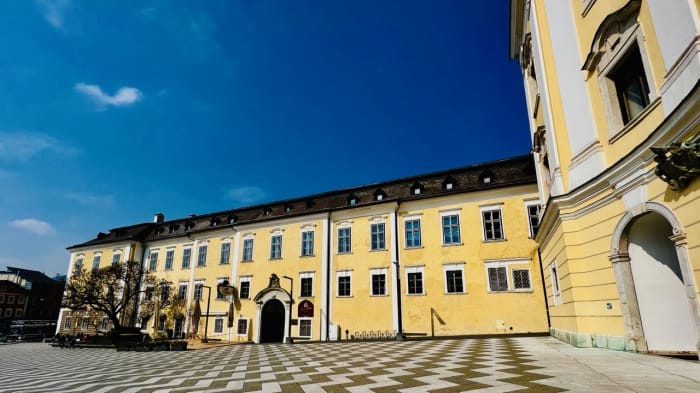 The Benedictine abbey he built played an important role in creating a community here. Monks through the ages have been instrumental as teachers, poets, writers, book illuminators and collectors. According to the local tourist board, this was once the world’s third most visited place of pilgrimage, and pilgrims still visit today.

The abbey has a dramatic history, with fires and ransackings and the like, before it was finally dissolved in 1791.

The abbey church (later promoted to a basilica) you will have seen before, I’m sure. This is where Maria married Captain von Trapp and all his children in The Sound of Music. It’s a lovely church, as you can see. Inside and out. 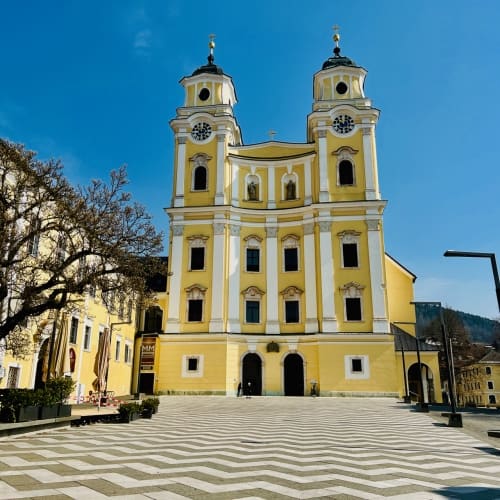 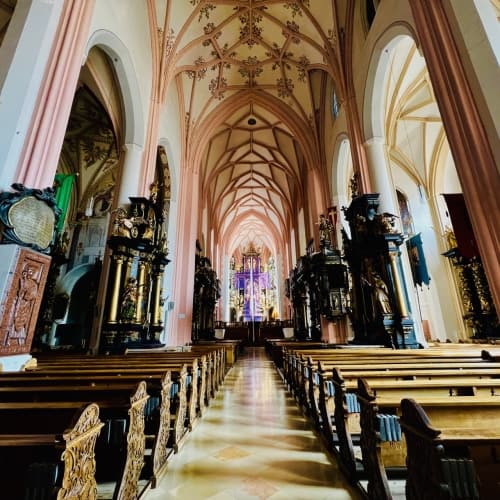 11 kilometres long and 2 kilometres wide, Mondsee is one of the biggest lakes in Austria’s Salzkammergut lake district. It is a favourite holiday spot with Austrians; they come to hike, climb, surf, sail, swim, and other fun stuff. Water temps can get pleasantly warm, reaching a toasty 27° (81°F) in summer.

However, there is more to Moon Lake than a romantic name and a stunning location. People lived in these parts as far back as 7,000 years ago, you see. 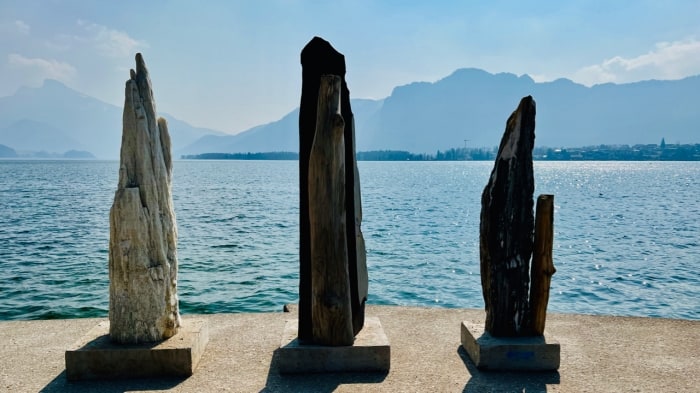 Models of piles on the shores of Moon Lake

In Austria and in five other countries – France, Germany, Italy, Slovenia and Switzerland – Neolithic and Bronze Age folks left their mark. They built stilt houses – known as pile dwellings – on the shores of lakes and rivers.

937 of these settlements are spread out around the Alps, dating from 5000 to 500 BCE. Of these, UNESCO has deemed 111 to be of outstanding universal value. And as they have been under water for millennia, conditions have been excellent for preservation. Thanks to that – and to dendrochronology (dating by tree rings) – we have a pretty good idea of how life on the farm might have been here back in the day.

The piles tell us about everyday life, the care and breeding of farm animals, development and use of metals, and ancient technology. They tell us about trans-Alpine trade, using dugout canoes and carts with wooden wheels and axles as means of transportation – in short, the beginnings of modern society. 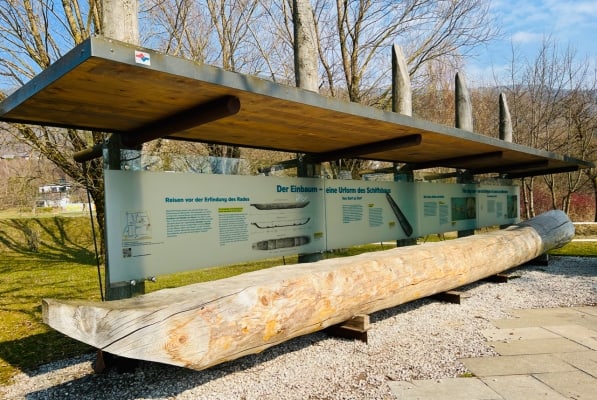 This is a model of a dugout canoe known as Das Mondseer Schöff. In this area, dugouts were built until the 1960s, and used on Moon Lake as late as this century. The canoe is solid and stable in the water; ideal for fishing. Building techniques have been handed down through the generations.

Original remains are difficult to see

On the downside – for us, at least – the settlements were abandoned as water levels rose. And precisely because they are now under water, most of them are difficult to see.

Half of the 111 settlements are in Switzerland, the rest are spread out in the other countries. Of the five ancient stilt villages here in Austria, the only accessible ones are in Mondsee and nearby Attersee. Or so I was told.

Turns out that’s no longer the case. The actual sites are now off limits to the public at large. 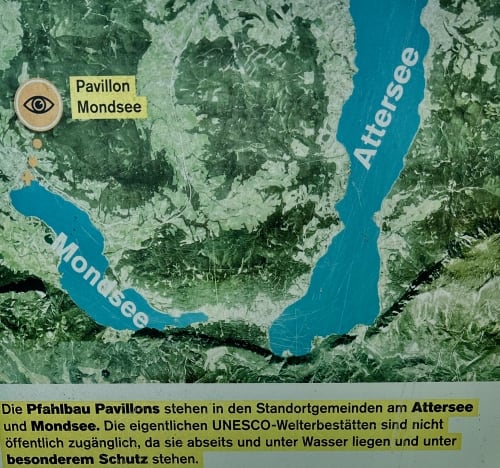 ‘The Pfahlbau Pavilions are located in the site communities at Attersee and Mondsee. The actual UNESCO World Heritage sites are not accessible to the public, as they are out of the way, under water and specially protected.’

I walk over to the eastern end of Moon Lake that you can see in the map here, just by the narrow outlet. This is as close I can get to the actual site.

I see – or think I see – what could be wooden posts in the water just off the shore. Are they the original stilts? Parts of the now sunken village? Or is my imagination running amok?

I don’t know. For now, though, this will have to do.

Österreichisches Pfahlbau- und Klostermuseum (The Austrian Pile Dwelling- and Monastery Museum) is located in the village. In the abbey, no less. Right next door to the church. Sadly for me, it’s only open between May and October. So I have to settle for the Pfahlbau Pavillon in the lakeside park.

Fortunately, the pavilion has heaps of interesting info. I learn that Matthäus Much, a local historian, is the one that discovered the pile dwelling remains here at Mondsee back in 1872. He had more than 6,000 finds in his collection, including 30 copper objects. That says something about trade and the area’s economic influence in the prehistoric era. He also preserved biological finds from those times: apples, grains and textile remains.

In addition to the large replica canoe, the display also includes various archaeological tools and a diploma certifying its world heritage status. 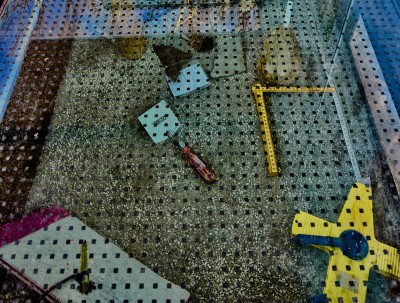 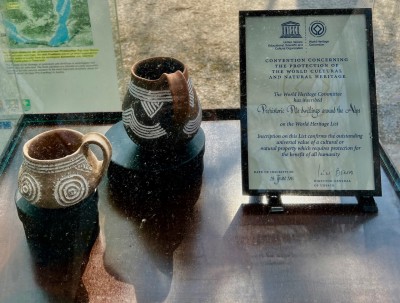 Tools of the trade and UNESCO’s endorsement

I’m reminded of the rock art we have all about the place in Scandinavia, much of it from the same era. Fascinating to see concrete evidence of our prehistoric ancestors: what they did, what they thought about, how they lived their lives. 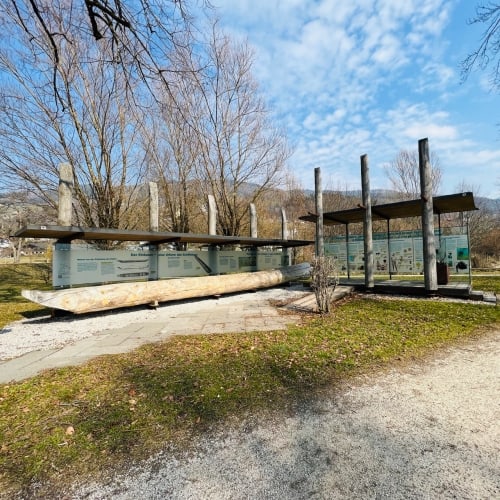 The prehistoric pile dwellings constitute an odd world heritage site. I’m curious to see more, so I’ll look out for more accessible settlements. Fiavé in Alto Adige/Süd-Tirol looks like a good option. Visiting the Dolomites is never wrong anyway. Will keep you posted.