Are you familiar with the Aosta Valley? Like Le Marche, Aosta is amongst Italy’s lesser-known regions, known only to the most avid Italophiles; a hidden jewel.

I’m just back from this secret and oh-so-beautiful corner of Italia la bella, up in the north-westernmost corner of the country, just next door to France and Switzerland. I will share all kinds of fun things to do in Aosta Valley in due course. Today, however, I wanted to talk about mountains. Very tall mountains. And how to get up close and personal with the sky, all without breaking a sweat. Best enjoy that. Many of the other activities, you see, do come with a bit of sweat. Some good outdoor cardio workouts to be had here, I assure you. And a satisfying sense of achievement.

The Giants of the Alps

We are in the Italian Alps, where three giants tower above us: Monte Rosa, Cervino – called Matterhorn on the Swiss side of the border, and the tallest of the lot, Monte Bianco – called Mont Blanc on the French side of the border. I’ll use the names interchangeably, in honour of the linguistically interesting region we are in. Also, because I like it.

Italy’s smallest region is bilingual and autonomous. Did you even know Italy had a bilingual region? I did not. But there it is: official languages are Italian and French. Additionally, people speak the regional Patoué valdôtain. In fact, more than half the population speak all three. And as if that wasn’t enough: the Walser people, from Valais across the border in Switzerland, have lived here since the 12th century, so many also speak Walser German. I think we can agree the people of the Aosta Valley are pretty clever polyglots.

OK, on to the mountains:

When I was in school, we learned that 4,807-metre-tall Mont Blanc was the highest mountain in Europe. Of course, now we know better. The actual highest mountain in Europe is Mount Elbrus in Russia, a whopping 835 metres taller than Mont Blanc. Back then, the Caucasus weren’t considered part of Europe, apparently. In fact, Mont Blanc has dropped to 7th place, behind six mountains in the Caucasus, including Mount Kazbegi in Georgia.

That said, ‘losing’ the tallest mountain status doesn’t make Monte Bianco any less impressive – just look at its striking silhouette on the horizon here: Mysterious from a distance, and mysterious up close (well… closer.) Lines like music: first a crescendo, then a diminuendo, interspersed with a few smaller peaks, then… well, then we don’t know – as it disappears behind another mountain. 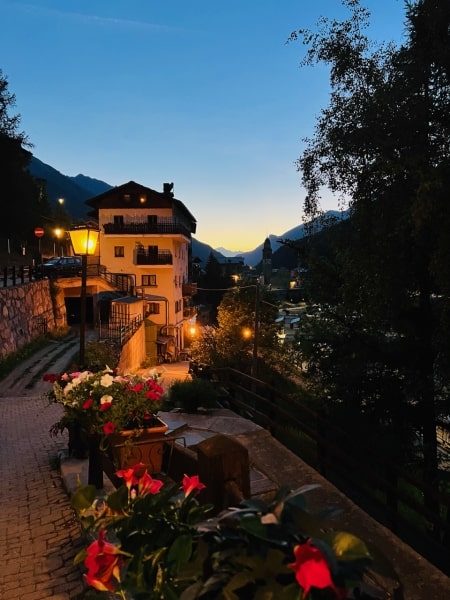 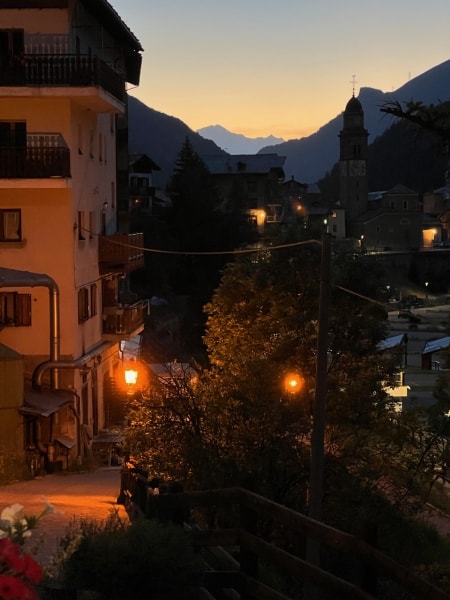 You can see this view of Monte Bianco from just outside the door of charming Lou Ressignon restaurant in Cogne in the Aosta Valley.

And so we are going up into the Mont Blanc massif – up to the highest point we can reach in Italy, without actually climbing: Punta Helbronner.

Effortlessly to the top of Italy

Helbronner doesn’t sound very Italian, does it? To me, it sounds German, but it is named in honour of Paul Helbronner, a French cartographer.

To get to the top of Helbronner, we take Skyway Monte Bianco. Opened in 2015, the cable car whisks you up to 3,466 metres in mere minutes, with an intermediate stop about halfway.

Down on the ground, we are surrounded by towering peaks clearly letting you know who’s boss, and don’t you forget it! 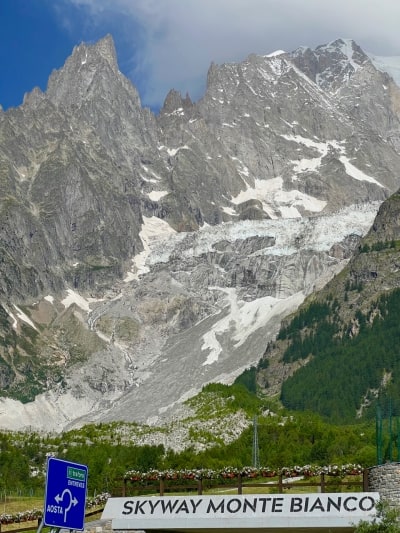 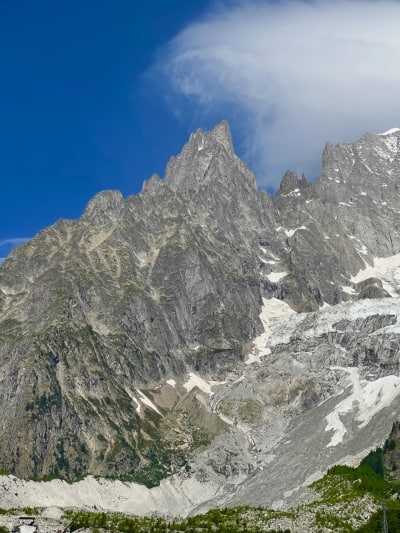 View from Courmayeur, the valley

This is more than a cable car, mind. It’s a 360° viewing experience as you ascend the mountain. I like to think of it as a sky ship. 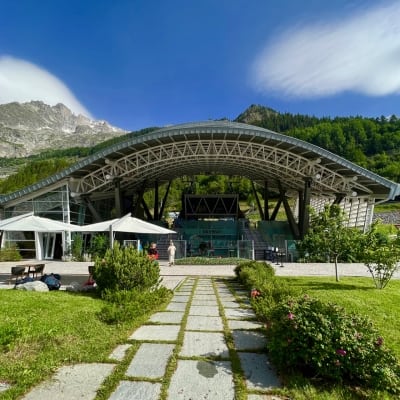 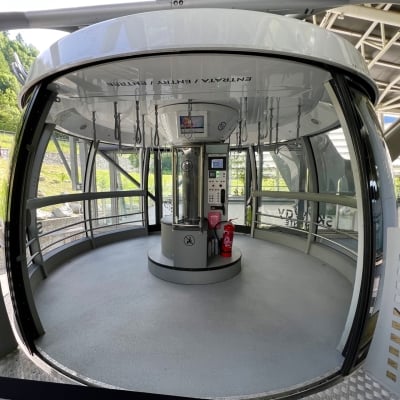 Does it look familiar? Then you might have seen Colin Firth and Taron Egerton fly around in here in Kingsman 2.

In and up we go, leaving Courmayeur behind – and below. 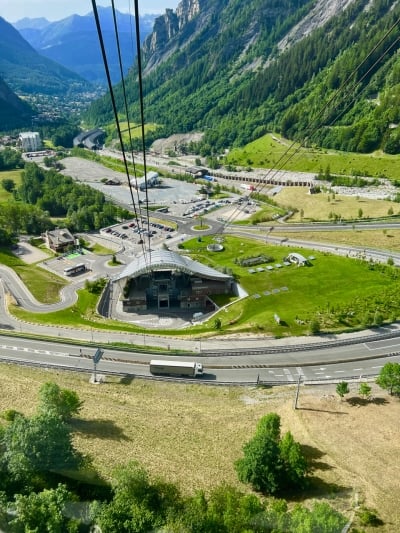 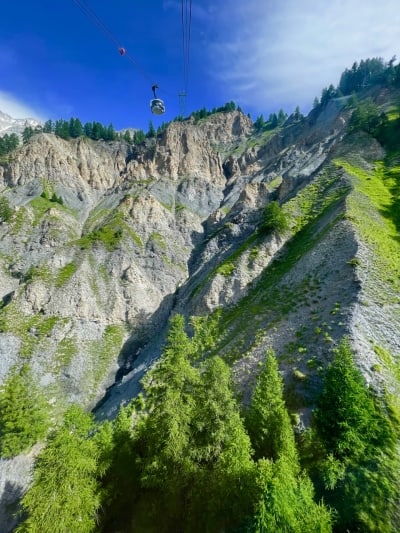 The sky ship stops at 2,173m. You can now take another one up to the top of Helbronner – or take a break, have a look around and learn a little. Good thing we have time. Here’s what you’ll find at the Pavillon: 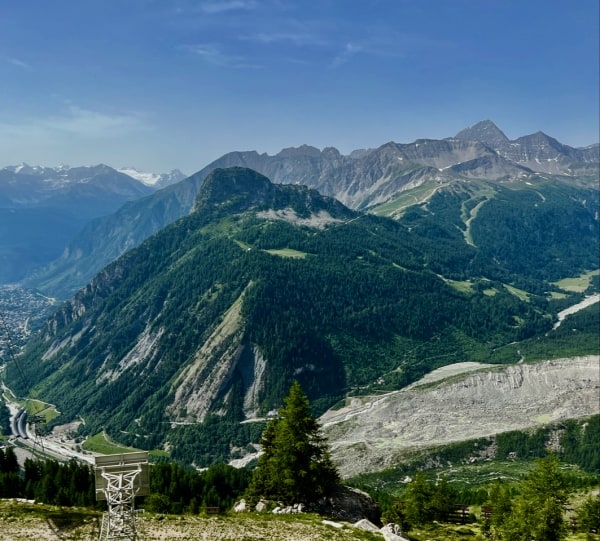 At the heart of the skyway is a large terrace where you have 180° view of Mont Blanc and Val Veny.

At Hangar 2173 you can learn about 70 years of cable car history, and see one of the original cars. Looks solid enough, I think – but it does of course lack the cool space age feel of the present one. 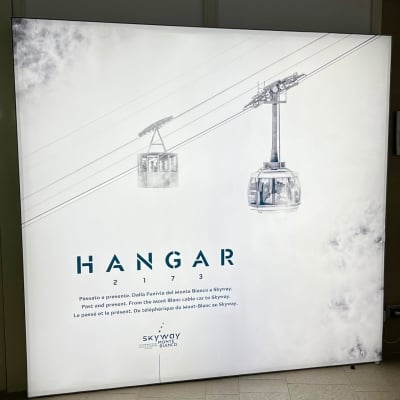 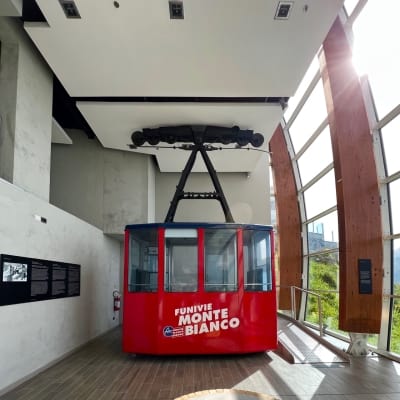 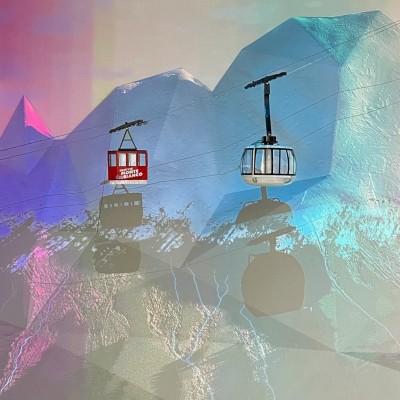 And this is the cable we have to put all our faith in. Solid stuff.

There is also a bar, a restaurant and a cinema with space for 150 people at this level, as well as a boutique where you can buy souvenirs – and locally produced wine! Very locally produced. 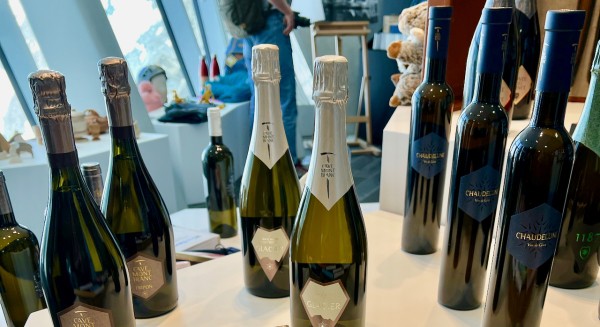 The altitude, the atmospheric pressure, the temperature and the special care are the factors which define its unique and inimitable characteristics.

The first bottle of Blanc de Morgex et de La Salle Classic Method Extrabrut “Cuvée des Guides” was opened – with an axe! – at the top of Mont Blanc on 20 July 2009. The name is a homage to the brave Alpine guides from Courmayeur, and to the majestic mountain herself.

(Interestingly  – and I have not seen this mentioned anywhere – 20 July 2009 was the 40th anniversary of the first moon landing, the 36th birthday of Haakon, future king of Norway – and most importantly, Cat’s 8th birthday.)

900 species from around the globe grow amongst the rocks up here, a delight to see now in summer. In winter you can amble about on snow shoes. 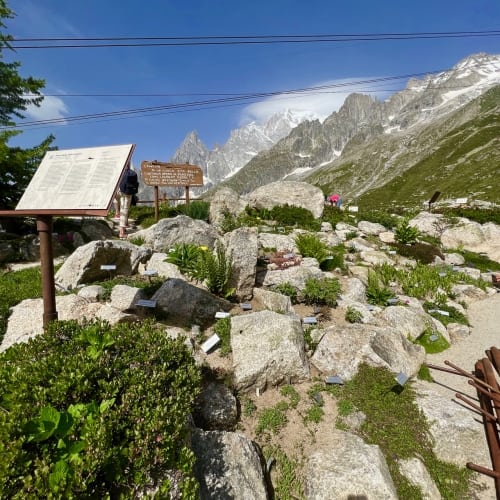 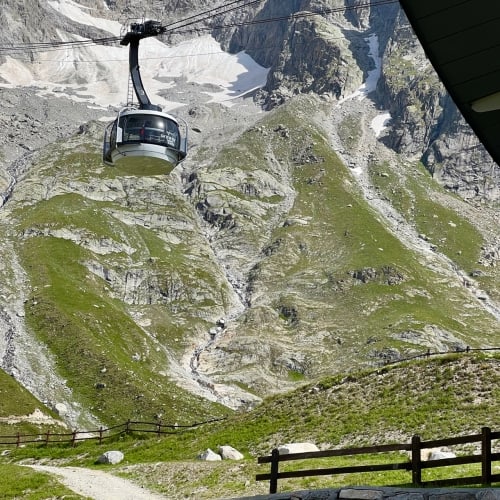 Relax and enjoy lovely (but a bit chilly) weather whilst taking in the surrounding mountains and the sky ships gliding up and down. 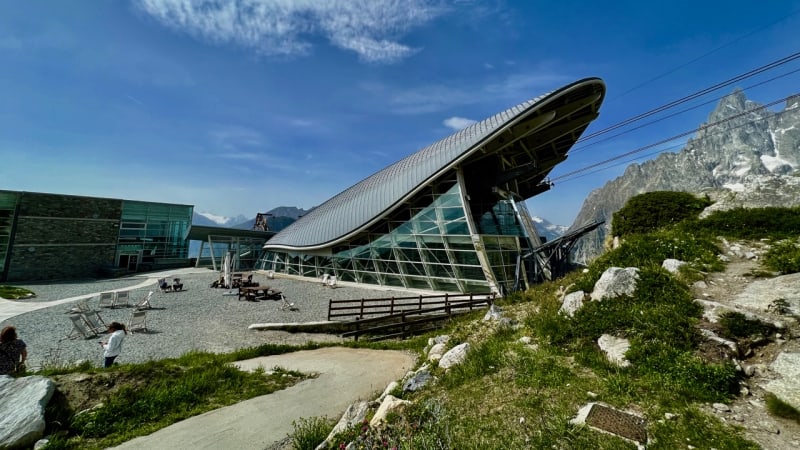 Sitting around at 2,173 metres

Onward and upward we go – to this view!

… how about a quick detour to France?

Sure, you can always drive through the Mont Blanc tunnel that connects Courmayeur with Chamonix. It’s 11.6 km, with the border 4 km in (from the Italian side). The whole journey takes about 17 minutes through nearly 3-km-thick rock. Which is certainly impressive.

But even more impressive, I think, is going through this intriguing door, all Narnia like – 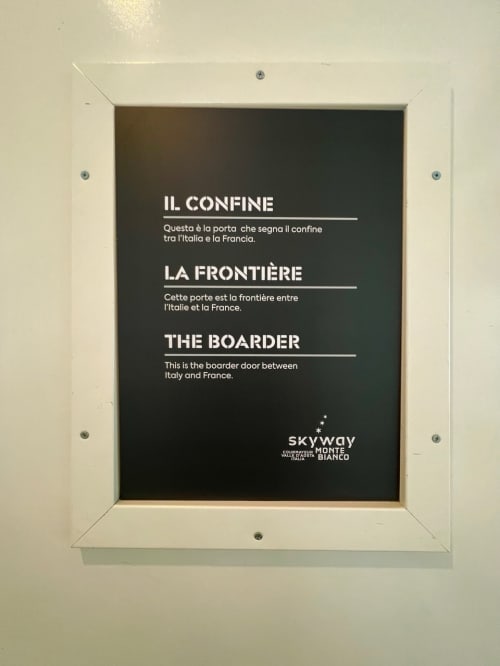 The door to France

– and catch one of these gondolas across to Aiguille du Midi, then take another cable car down to Chamonix. 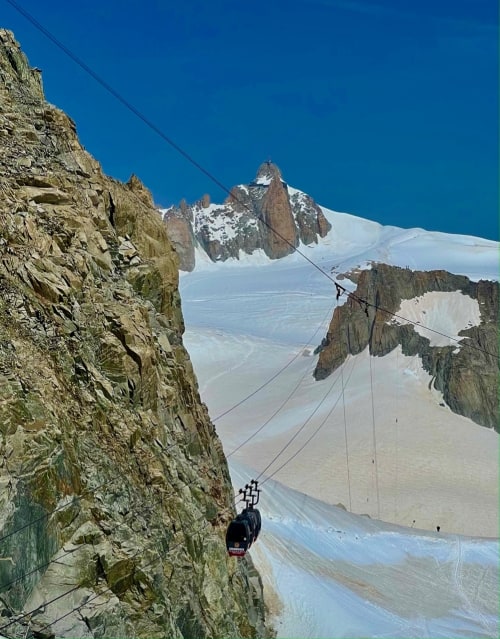 The Trans Mont Blanc must surely be the most interesting way to travel between Italy and France. It takes about half an hour to cross the glacier below. 30 stomach-tinglingly scary and simultaneously exciting minutes of weightlessness, nearly 4 km up.

This particular route only operates in summer. It is susceptible to the vagaries of Mother Nature, so the decision to run the gondola is taken every morning. Therefore, you cannot buy tickets in advance.

Right: out we go. Put a sweater on first, or better yet, a wind-breaker. Then: this! 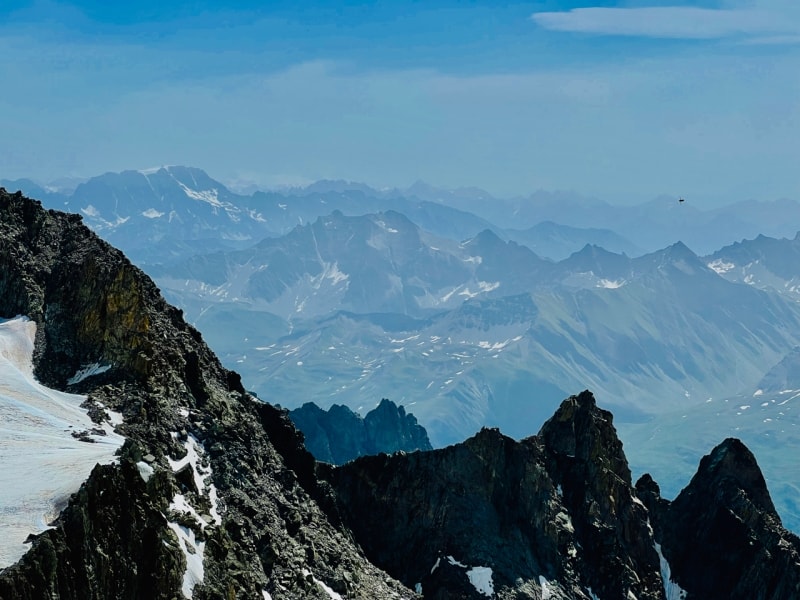 In the back row, approximately in the middle, you will spot a familiar pyramidal peak: Cervino, better known as Matterhorn!

From the circular terrace you have a 360° panorama of awesome in the truest sense of the word. 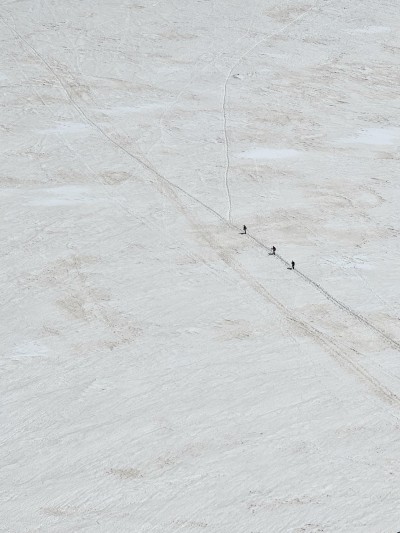 Far below us, three people connected with rope, trudge across the glacier.

Up at Punta Helbronner is also a book shop, a room showcasing mountain crystals, and Kartell Bistro. 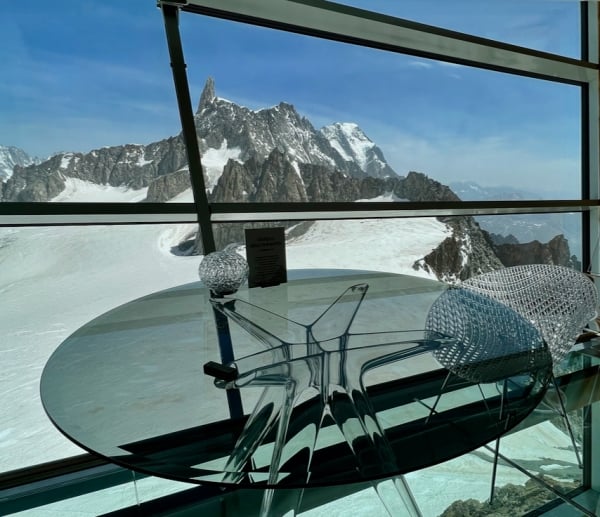 The infinity table at Kartell: not a bad view with lunch, is it…

And here we all are, Team Nordic, with our Helbronner guide, Maria, standing nearest the window, saving the glacier. 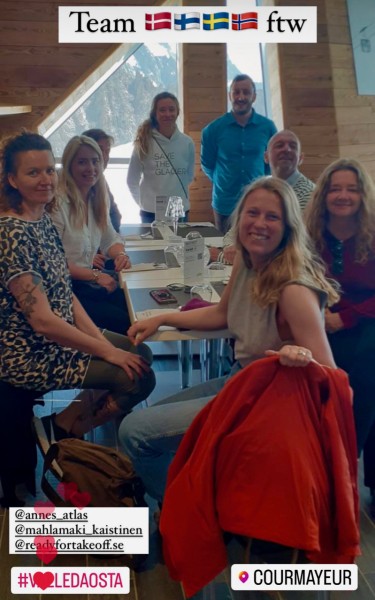 Disclosure: I was in the Aosta Valley as a guest of Valle d’Aosta. All words, pictures and sassy opinions are mine and mine alone. Complete editorial control of content, as always here on Sophie’s World.