Norfolk Island convict settlement: the most haunting place in the Pacific 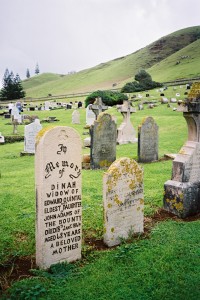 According to legend, Norfolk Island is the most haunted place in the Pacific. A stroll between these gravestones reveals the history of what was once Britain’s worst convict colony. So bad was it, convicts sought execution as relief from suffering. One prisoner, Thomas Salsbury Wright, was found guilty of forgery and sent off to Norfolk 99 years old. He lived in horrid conditions and died 6 years later. If I close my eyes, it’s as if I can hear screams, resigned sighs – amidst the sound of waves brushing the sand.

Ye Christian Bretheren as ye pass by
Pray on this tomb cast an eye
As I am now so you must be
Prepare yourselves to follow me.

At first sight, I was struck by the stunning location. Surrounded by sturdy Norfolk pines, rolling hills, a gorgeous beach and the Pacific Ocean, it’s an inspirational and beautiful spot to contemplate life, death, the way of nature… Ironic, almost.

When Norfolk Island convict settlement was finally abandoned, descendants of the Bounty mutineers moved in. Tombstones – and the phone directory – reveal plenty of Christians, Quintals, McCoys, all Bounty names. The diminutive island abounds with intriguing history – and nowhere is it reflected better than in this evocative cemetery.

It has been seven years, but I’m still drawn to this island on the other side of the world; perhaps haunted, most certainly haunting.