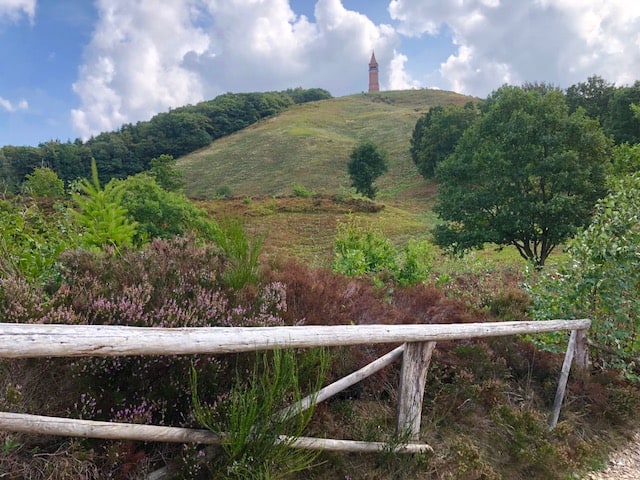 You will excuse the somewhat flippant title of this post, won’t you, Denmark? The slogan ‘It’s lovely to be Norwegian in Denmark’ has been around for nearly 30 years. And there’s no doubt about it: it is indeed lovely. But you don’t really do mountains, do you?

When I was in school, 958 years ago, I learned that Himmelbjerget was Denmark’s highest mountain. As it turns out, that’s still the order of the day, despite that mistake having been cleared up in 1847! It appears Norwegian schools are a bit lax in updating geographical details about the neighbour countries.

Let’s straighten it out once and for all: in this flat as a pancake country, the highest mountain (and I use the term mountain loosely) is Møllehøj, 170.86 metres above sea level. Oh what the heck, let’s call it an even 171 metres.

The ambitiously named Himmelbjerget (Sky Mountain) is a mere 147 metres high, and only the 7th highest. However – and this may be the root of the confusion – Himmelbjerget is Denmark’s most famous mountain; it has a much more prominent peak factor (well, peak…), and so is the most visually appealing of Denmark’s eh, mountains.

Today, I’ll take you up to the top. Hope you’ve got your mountaineering gear ready, folks. Here we go! 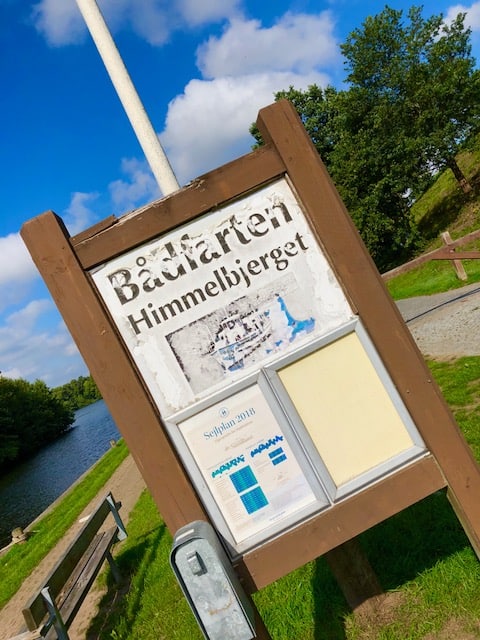 The best way to reach the mountain is by boat. That’s right! And not just any boat, but Solbaaden, this solar powered little thing – no noise, no smoke, no pollution, and with a max speed of 10 km/hour. 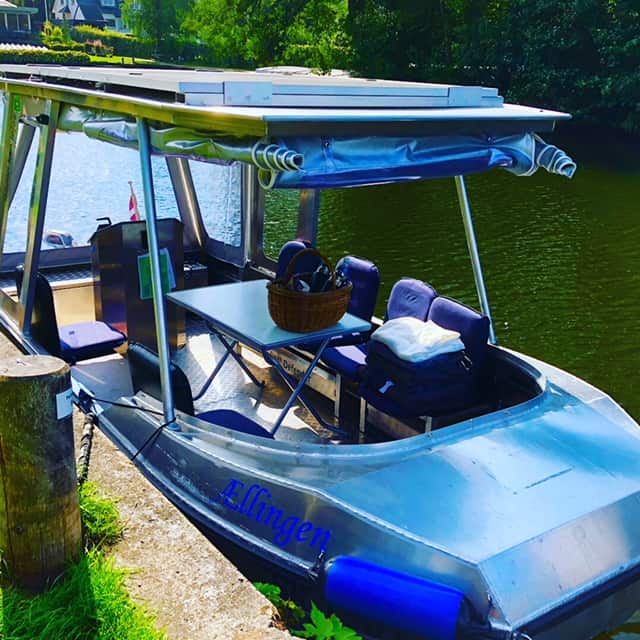 In the early days, people would come across the lake/river by steamboat. This is still possible with the 157-year-old paddle steamer Hjejlen. You can get on in Ry or nearby Silkeborg.

From Ry Harbour, we cross Gudenå, Denmark’s longest river. Not for nothing is this area called Midtjyske sø-høiland, meaning Mid-Jutland lake highland. (PS: You can call me Skip.) 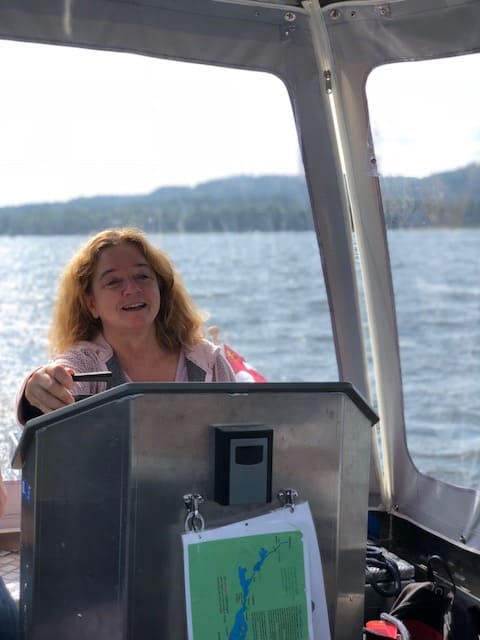 The trip takes about half an hour, past idyllic country scenes. 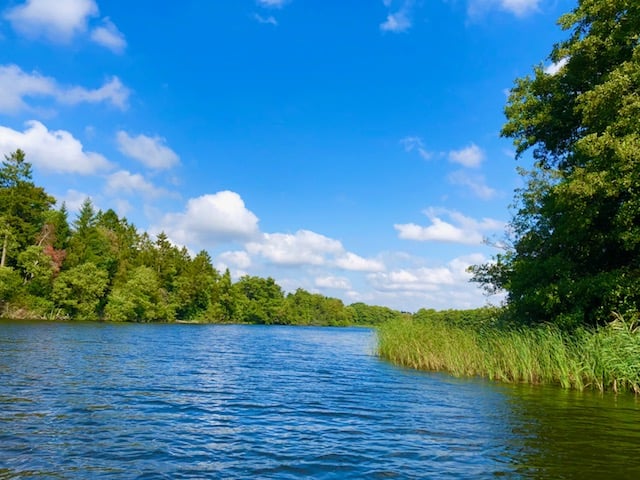 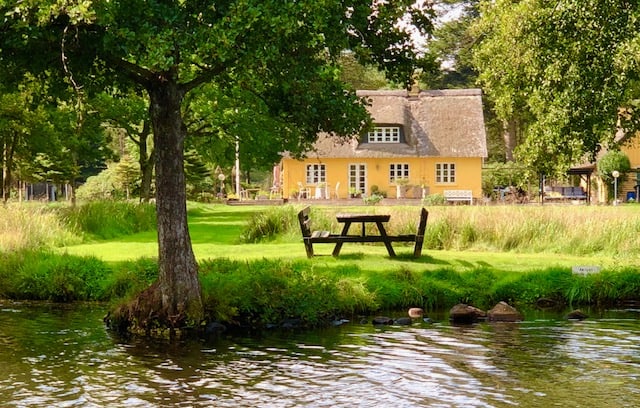 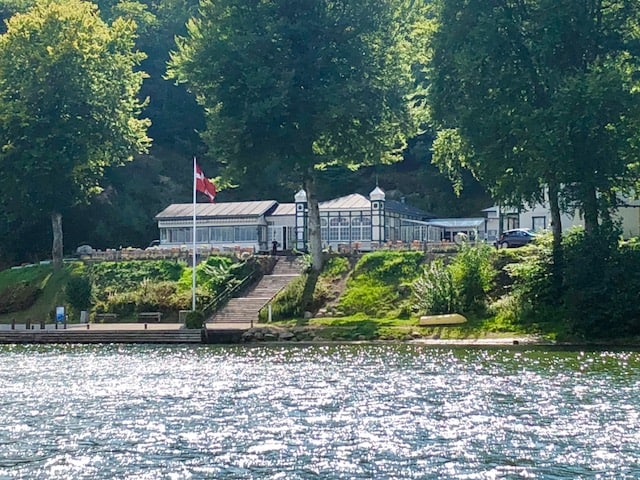 As we set ashore, this lovely old building greets us, housing Hotel Julsø, a gourmet restaurant at the foot of the mountain. But that’s a post for another day. Today, we will focus entirely on the mountain and getting up it. So let’s pretend we’ve fortified ourselves with scrumptious grub from this delightful eatery. 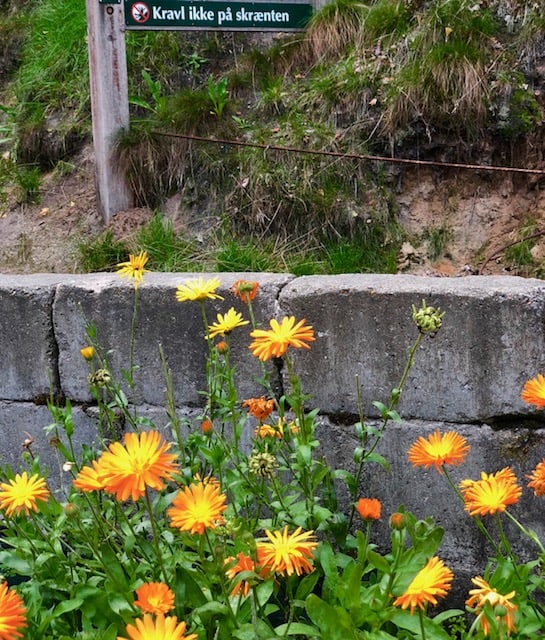 Up the first little hill (and it is little), we’re pointed to the right, for a 600-metre walk, very possibly the easiest walk I’ve ever undertaken in any kind of slightly sloping terrain. This is easy hiking at its best. 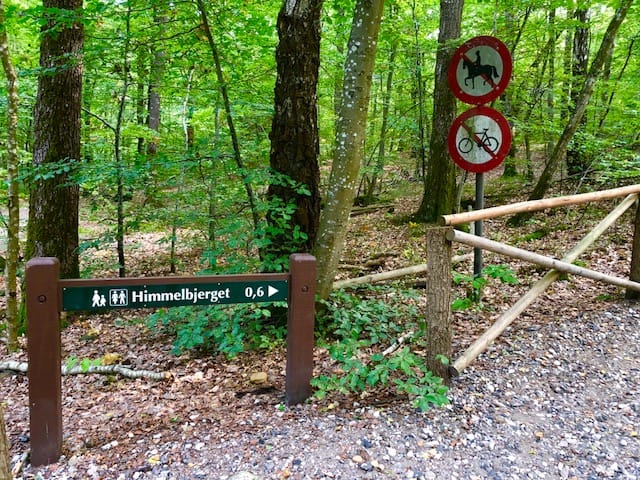 The red brick tower on top looms in the distance: 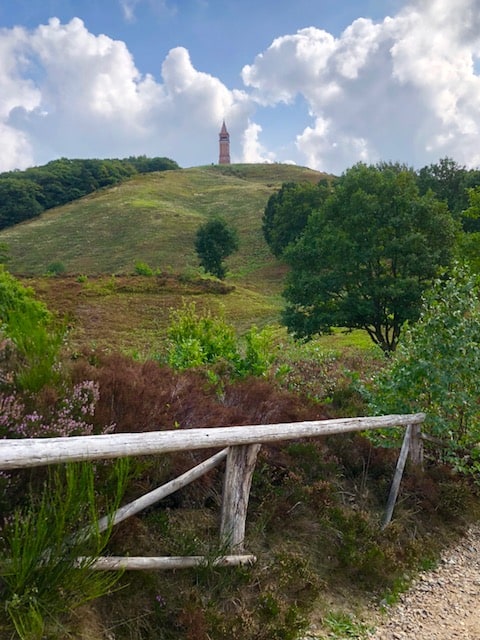 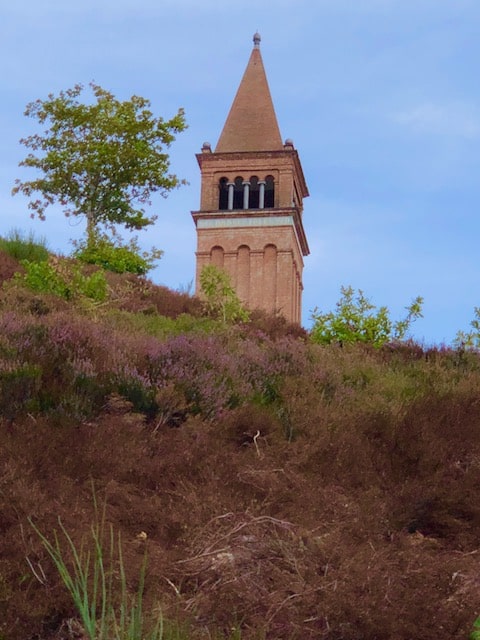 And before we know it, we’re at the top. From 147 metres up, the vista is lovely. 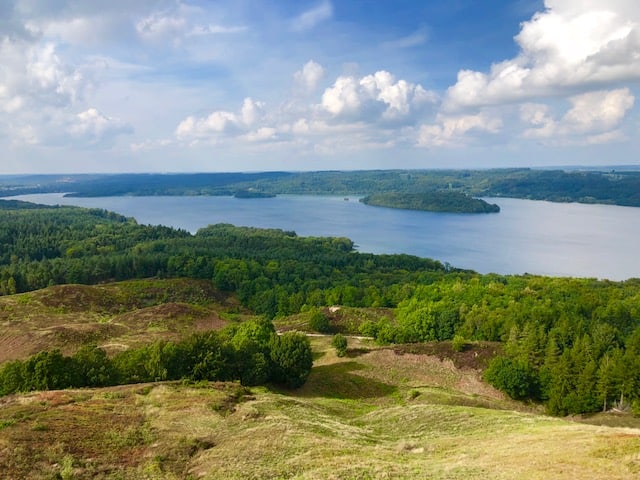 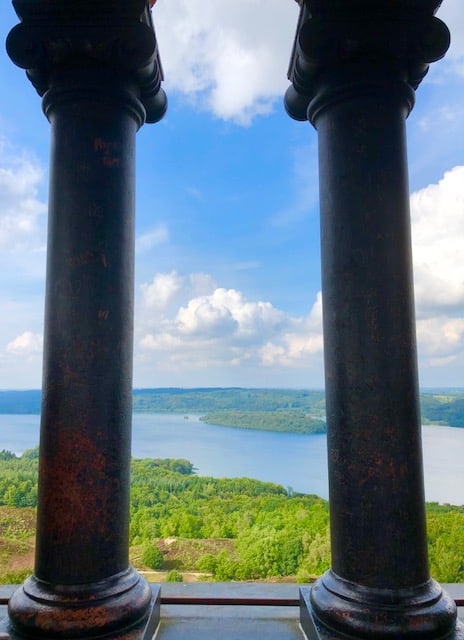 Frederick VII was king of Denmark in the mid-1800s. Fond of a drink or ten, and of debauchery in general, Frederick divorced his first two wives, one a princess, the other a duchess – then married Louise Rasmussen, a common ballet dancer (oh, horror). Louise may or may not have been his mistress of many years. Rumour has it, Frederick was also very close with his long-time buddy, Carl Berling. (Research shows that the labels homosexual and heterosexual weren’t really set before the late 1800s. In Fredrick’s time – and earlier, the distinction between the two weren’t that established in people’s minds. Boundaries were much more fluid, and allowed for closer and even erotic friendships between people of the same sex.)

At any rate, Carl is known to have enjoyed the company of both men and women, and he fathered a son with said Louise. The three of them – Frederick, Louise and Carl – all lived together at the royal castle; happily, we’ll assume.

King Frederick was also as folksy and unpretentious as they come. After a bit of an upheaval, he signed the first Danish constitution in 1849, thus becoming the last absolute monarch – and the first constitutional one. No wonder Frederick VII is one of the best loved kings of Denmark.

After signing away his absolute powers, he is rumoured to have said:

The King will only meet in Council when he is invited

and after a few eventful days (and possibly nights):

I can now sleep as long as I want

Who said it was easy being a monarch…

Back in the present

What does all this have to do with the mountain, you ask? Well, you could say Denmark was reborn with Frederick signing the constitution, and people gathered on top of Himmelbjerget to celebrate the country’s rebirth. It’s still a popular venue for public meetings and parties, as well as Sunday outings. 300 000 people visit Himmelbjerget every year.

In 1875, the tower was erected to celebrate the constitution – and Frederick. The inscription reads: “Til minde om Kongen – Frederik d. 7 – det danske Folks ven – Grundlovens Giver“, meaning ‘in memory of King Frederick VII, friend of the Danish people and giver of the Constitution’.

You’ll find several other monuments up here as well, including Kvinde-egen (the women’s oak) – an oak tree surrounded by an iron chain and four stones planted in 1915 in conjunction with Danish women getting the right to vote. In 1999, Børne-egen (the children’s oak) was planted to commemorate the 150th anniversary of the constitution. 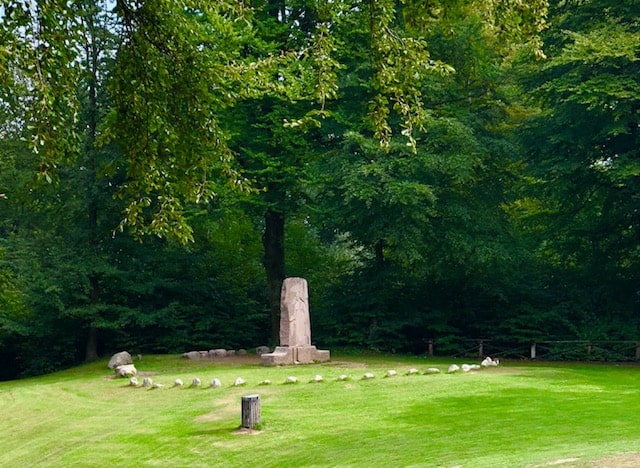 Disclosure: This time in Denmark I was a guest of Visit Aarhus. Every word, every thought, every opinion are mine, all mine. As always, as ever. Otherwise, there’s just no point.