What does dark tourism mean to you? Do you think of Auschwitz? The fields of Flanders or Cambodia‘s killing fields? Chernobyl? Robben Island? Pompeii? The Berlin Wall? Places where barbaric acts of terrorism have taken place? A walk in the footsteps of Jack the Ripper or a visit to the sordid sides of Edinburgh of the past? Some might even consider visiting North Korea a form of dark tourism.

Visiting scenes of death, destruction, suffering, grief and pain is controversial. Is it unethical? Or is it an act of respect? Lest we forget…?

And – why are we attracted to these places? Is it to connect somehow? Connect on an emotional level, with those that had to endure, so that we can better understand? And even appreciate that our lives are easy in comparison?

I’m drawn to places beyond the surface. Places that make me think. Places that make me feel. It has been six years; yet I clearly remember my blood boiling at the War Remnants Museum in Saigon. Walking through The Museum of Genocide Victims in Vilnius, learning about what had taken place in that house, gave me very real, physical chills. Eight years later, thinking about it, still gives me chills. So this is about educating myself, in a cross-sensory way. Then, perhaps I’ll be more aware when history repeats itself. Because we haven’t really evolved all that much, have we…? 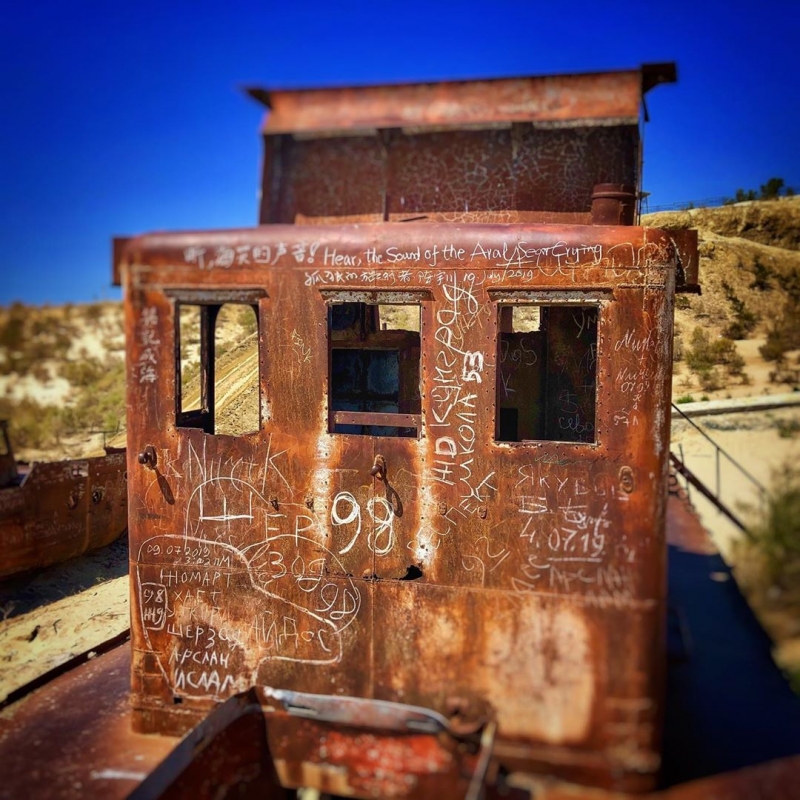 The death of a sea

This is about yet another dark chapter in human history. One of the world’s worst environmental disasters, yet many are not even aware of it. Fascinating and frightening, curious and heart-breaking, all at the same time. The death of a sea.

We’re in the autonomous region Karakalpakstan, in the once thriving fishing port of Muynak. It’s a searing hot July afternoon; the thermometre is pushing 50°C. Good thing then, that we’re on the southern shores of the grand Aral Sea. We’ll just run into the water for a quick dip, to cool down. Except…

Had we been here in 1960, that’s surely what we would have done. Then, the Aral Sea was the 4th largest inland body of water in the world. Home to about 30 species of fish. 68,000 km2, about the size of Georgia. And Muynak was a lively city, home to 25 000 people, most of them working on fishing trawlers or in the cannery.

It was the fourth largest lake in the world. It was a lake. It was a port.

As a result of an ecological disaster, thoroughly human-made, it is no more.

In 1960, when industrialising agriculture was all the rage in the Soviet Union, Nikita Khrushchev decided to start cotton production in the desert of Central Asia. The ambitions were grand; becoming the world’s largest cotton exporter. And so they constructed huge irrigation channels to divert the route of Amu Darya and Syr Darya, the two rivers that fed into the Aral Sea, to irrigate the desert for the crops.

The problems were many: inefficient irrigation channels built with outdated techniques lost almost 80% of the water to the land, instead of feeding it back into the lake. As the Aral Sea slowly evaporated, saline levels increased, eventually becoming so salty it couldn’t support life. No fish. No jobs. No livelihood.

Furthermore, the area was pumped full of fertilisers and pesticides, with the toxic remains sliding into the ever shrinking lake.

And it doesn’t stop there. Fierce sand storms showered the area with the residue from the salt and the toxins, and continues to do so, making Muynak a horrifically polluted place to live. Clean water is a scarce commodity. High amounts of DDE (pesticide) is found in blood samples from pregnant women, in umbilical cords and breast milk. Heart and kidney problems are common. So are birth defects and child mortality.

global, regional and local climate change can have negative consequences for human health. The Aral Sea disaster shows the result of short-sighted human exploitation of nature and is an alarming signal, indicating that all human activities with potential climate effects must be carefully thought through.

By 1987, the lake had split in two. Ten years later, it was reduced to less than 10% of its original size, and split in four. A further ten years on, two of those four lakes had dried up.

The Soviet Union’s ambitious cotton exporting goal was achieved in 1988. The cost was losing the Aral Sea and the slow poisoning of the population.

The maps here show how the sea has retracted from a full-fledged mega lake in 1960, gradually declining over the next 5 decades, to the desert it is today.

On the road in Karakalpakstan 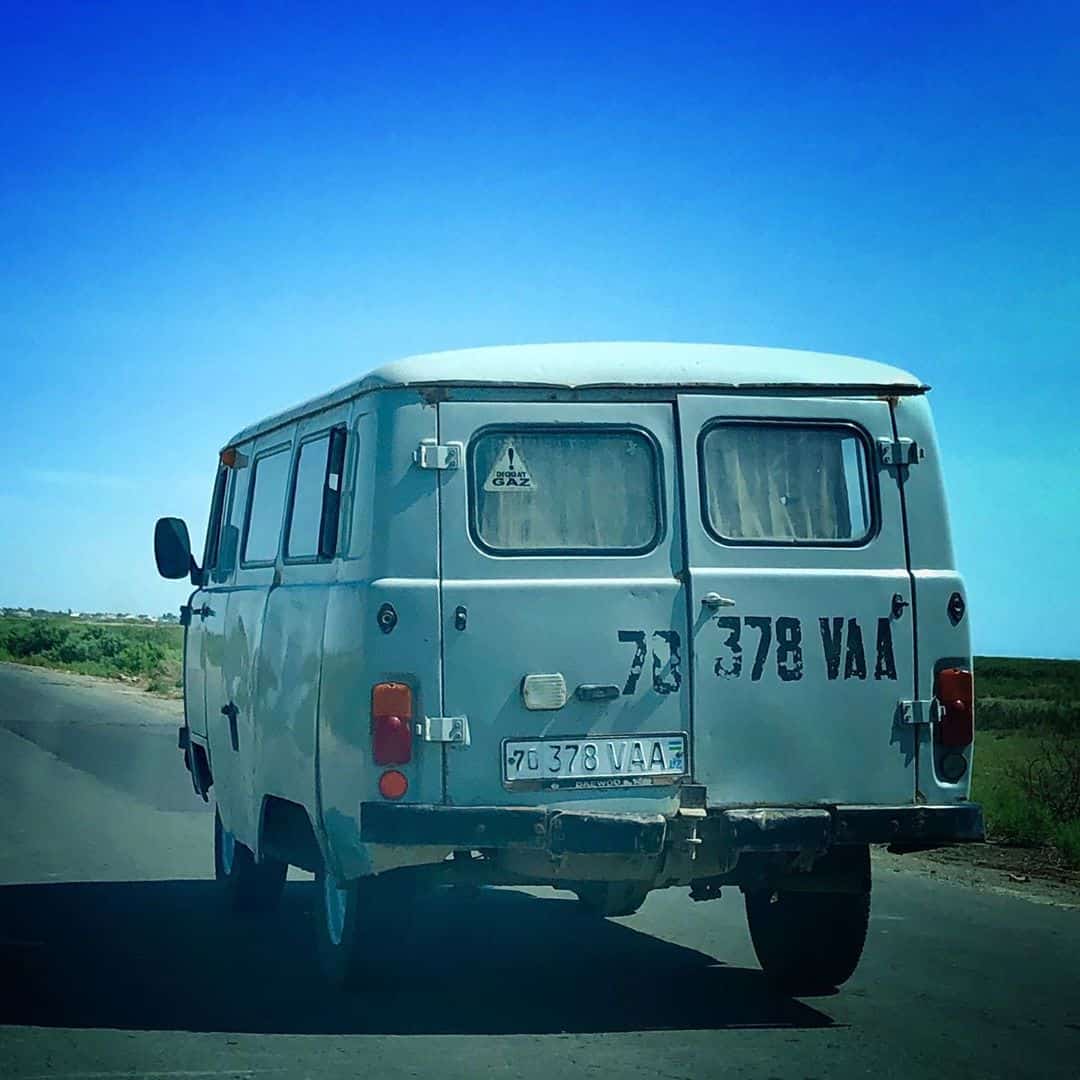 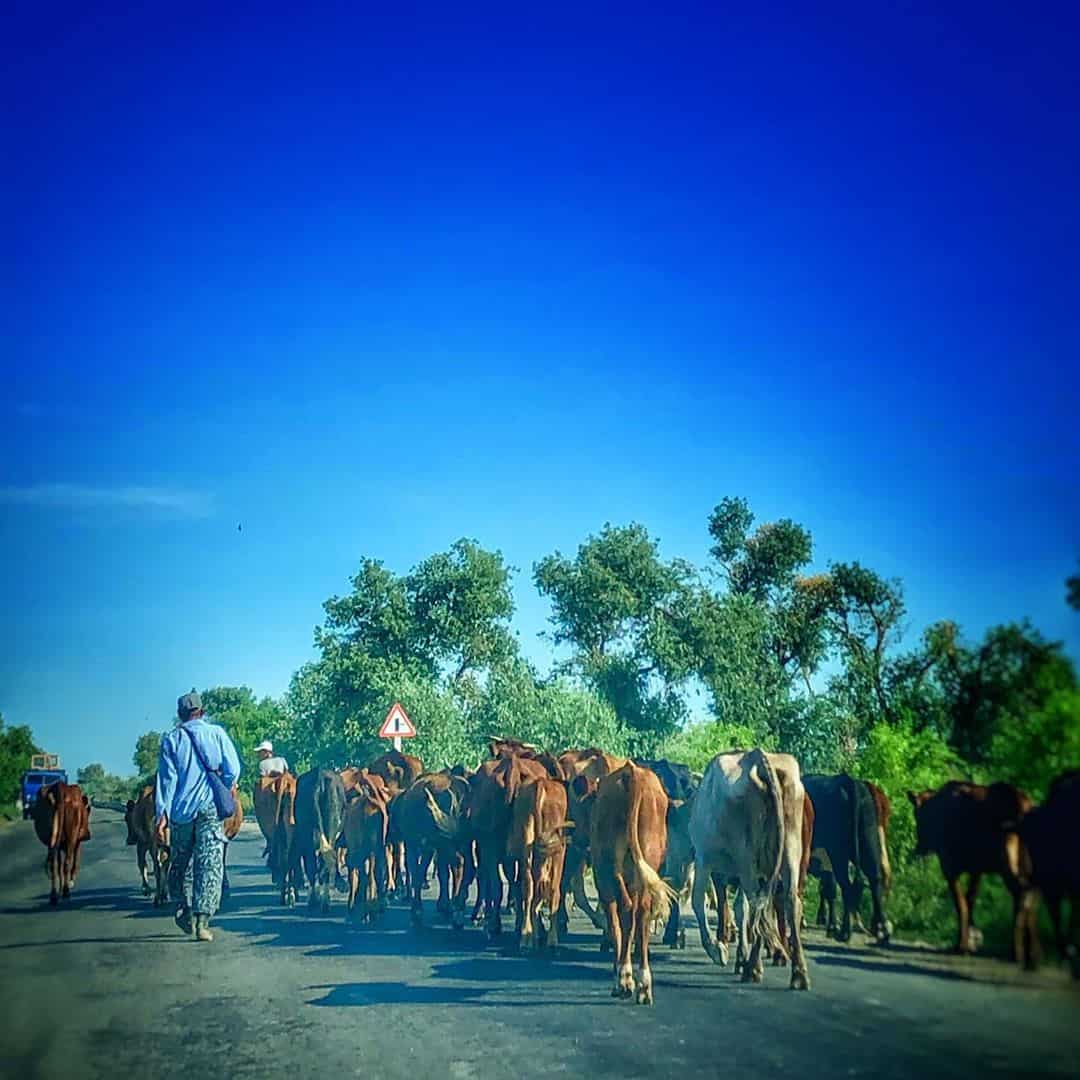 We have crossed the border from Turkmenistan to Uzbekistan. From the most isolated Central Asian country, to the most visited one. We’re now in Karakalpakstan, an autonomous republic within Uzbekistan.

After driving three hours northwards from Nukus, the Karakalpak capital, we arrive in Muynak. The landscape along the route is mostly desolate, lonely. Occasionally, we pass a herd of cows. It is blistering hot. 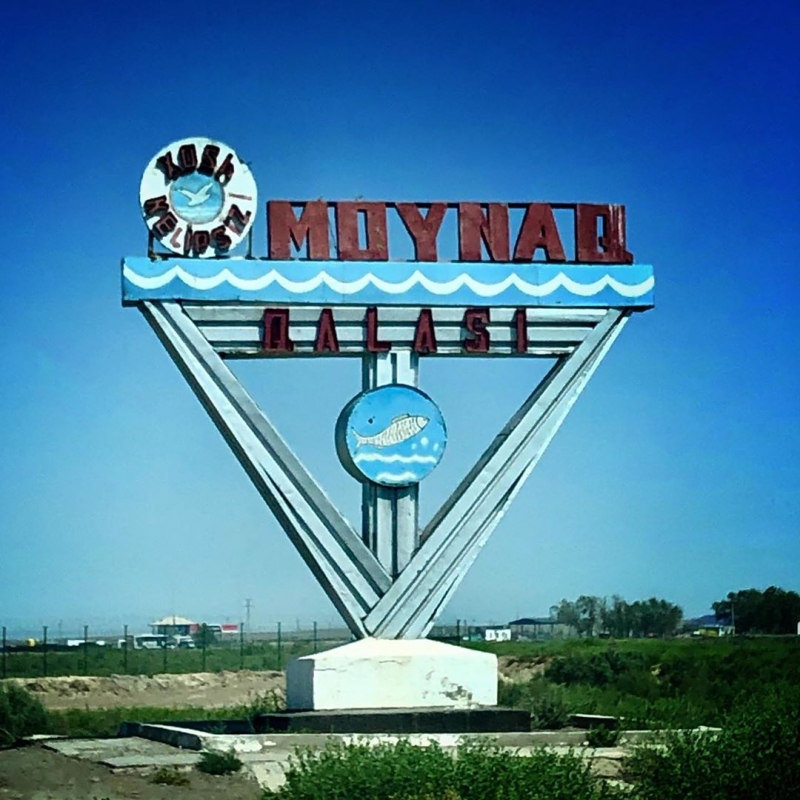 Somehow, Muynak feels even more remote than Turkmenistan. This feels like the most isolated place I’ve been, anywhere in Central Asia. 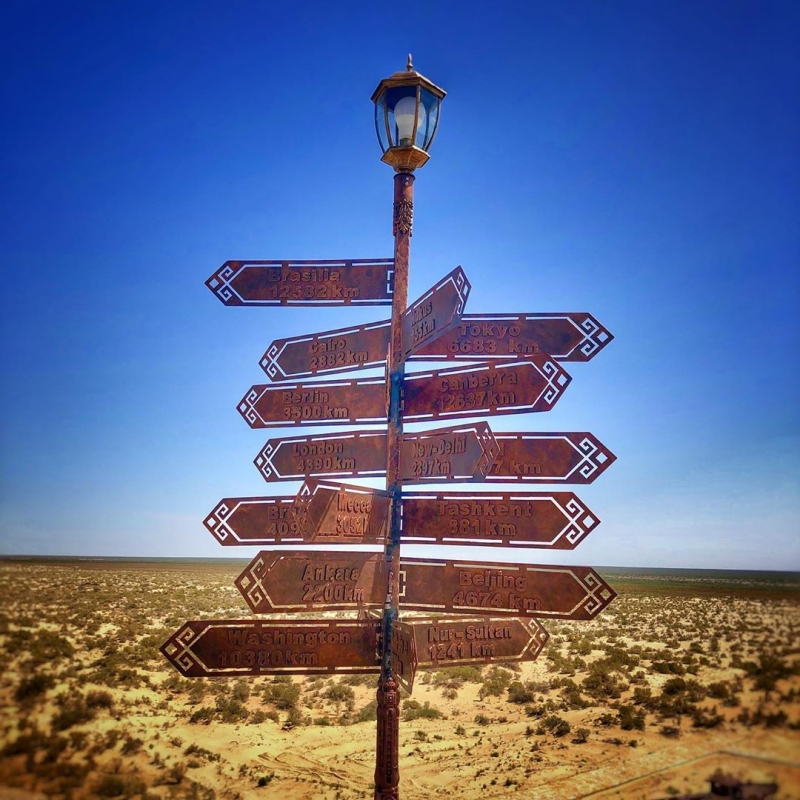 This sail is a monument to the lost sea, standing where the water level once was. Looks almost like water out there, doesn’t it? Not that far away. But if I walked towards the sea today, I’d likely die of heat exhaustion before getting anywhere near it. The port of Muynak is now more than 100 km from the shore. 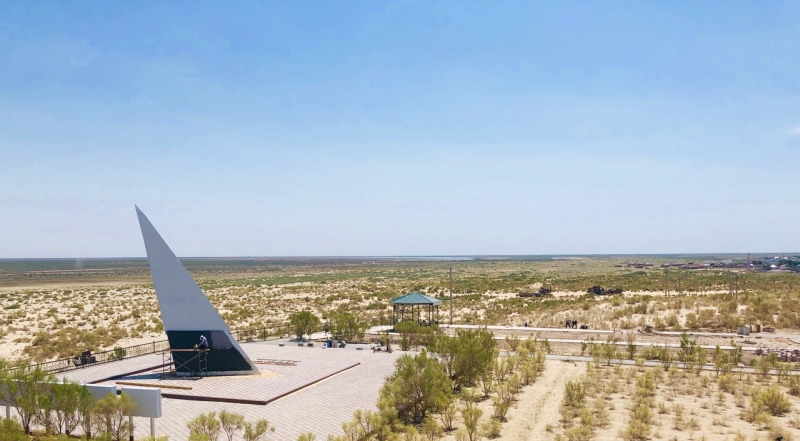 The Aral Sea Monument – and the fata morgana

From a viewing platform, we spot boats down below, marooned in the sand. Most of them are lined up in a row, like an orderly cemetery of monuments. Others are spread a bit further out.

Then down to the bottom of the sea. To move amongst the stripped trawlers left to rust in the Aralkum Desert. They haven’t been near water in years, and never will again.

For a while, no one else is in sight. Mad dogs and Englishmen (and the odd Scandi)…

Here on the dried-up seabed, it feels as if we are the only ones left in a post-cataclysmic world. The ship skeletons look like gutted playground equipment. I’m reminded of Pyramiden in Arctic Svalbard, another Soviet showcase, at the other end of the extreme climate spectrum.

A ship in the harbour 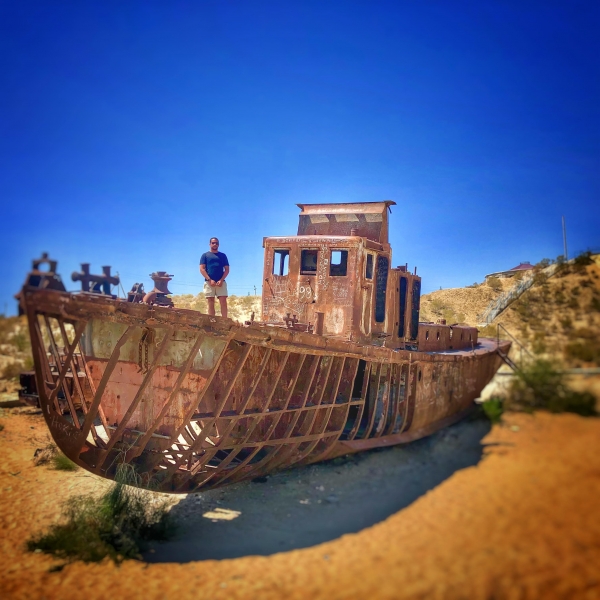 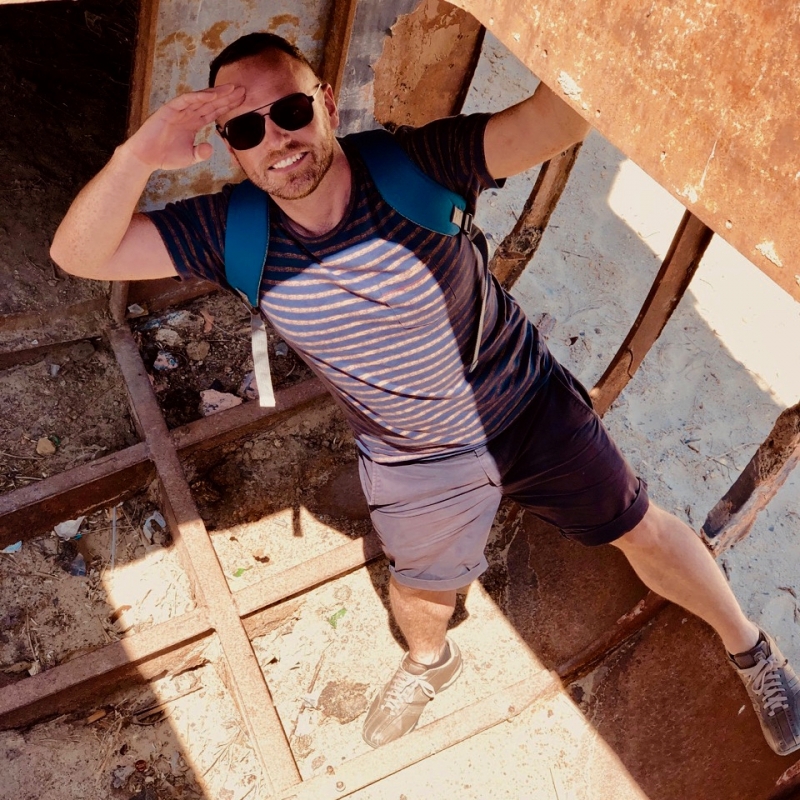 Clambering about, playing around 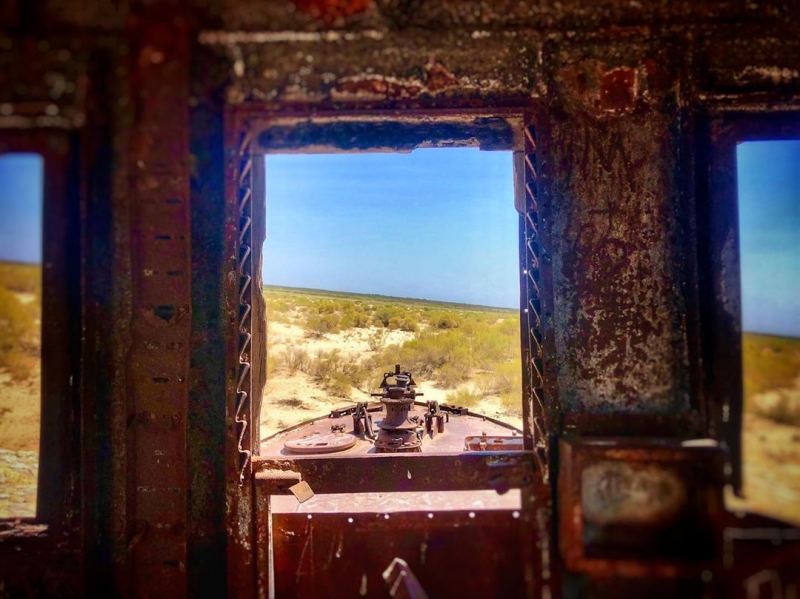 On the inside looking out

I’m also reminded of the Norfolk Coast Path, walking past boats stranded on the shore, waiting for the tide to come in. For these boats in Muynak, there will be no more high tide. They are dead. This is their cemetery. 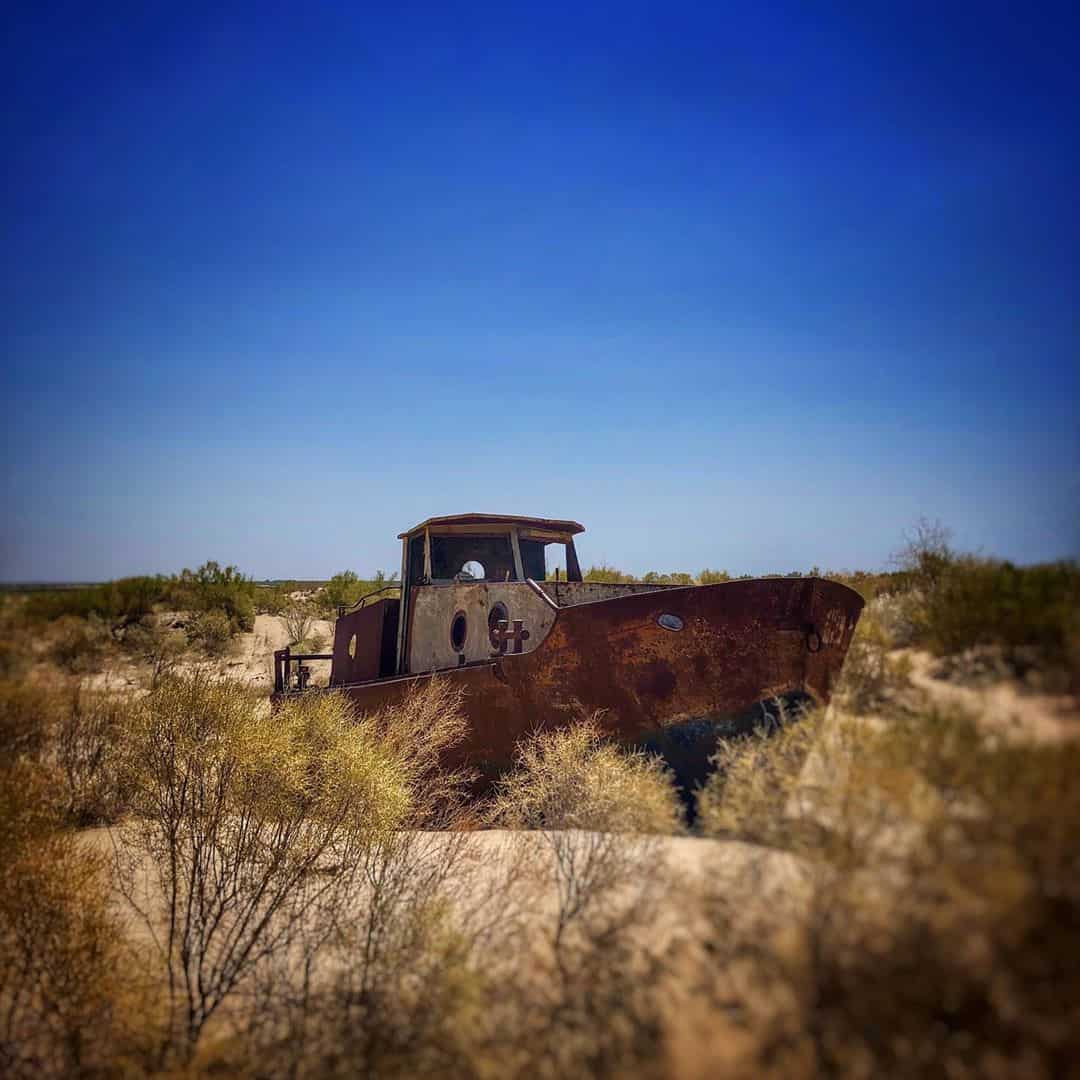 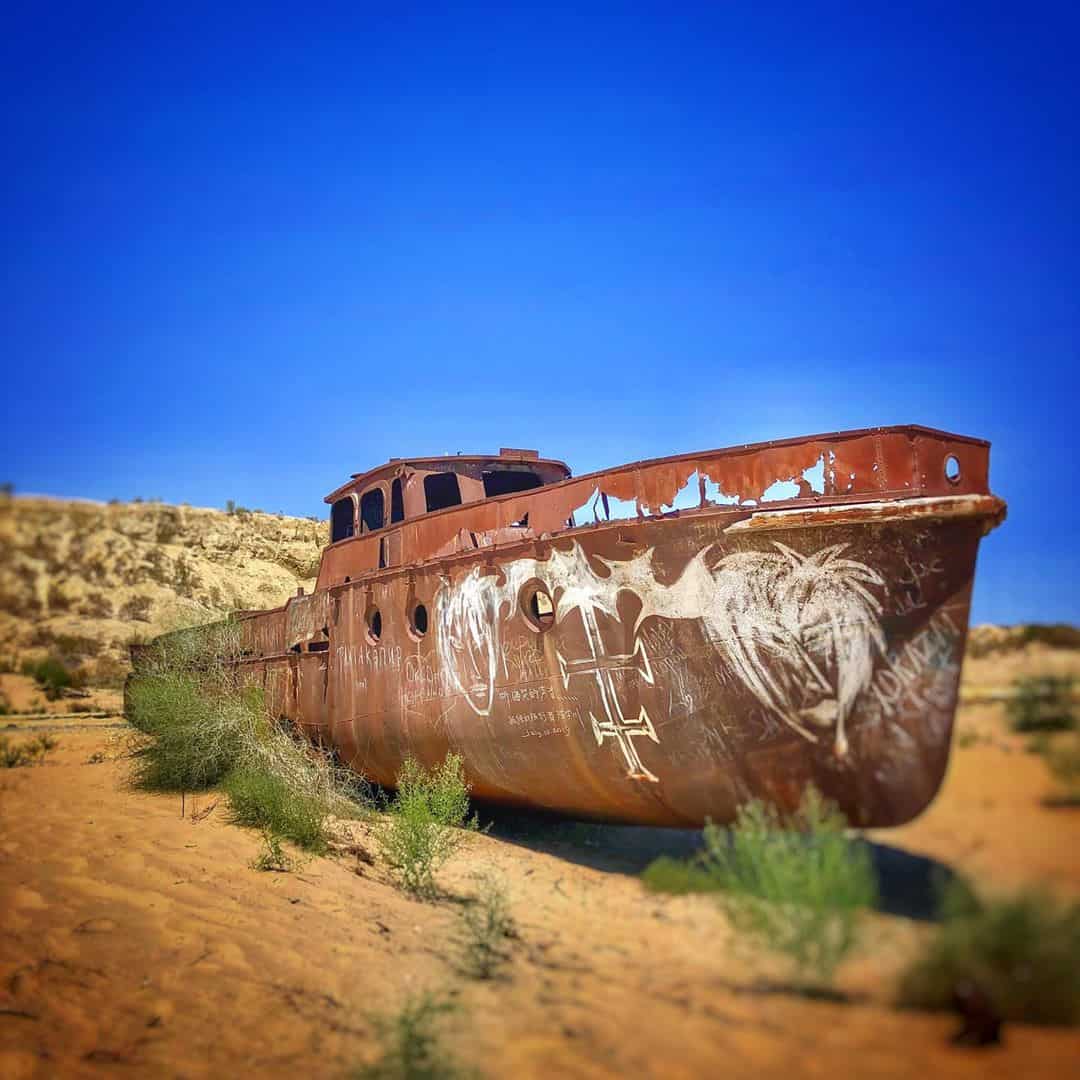 Continuing along, I notice we’re not alone in this morbid memorial to megalomania. Two German girls, visitors like ourselves, have found their place in the shade, beneath a once proud ship. 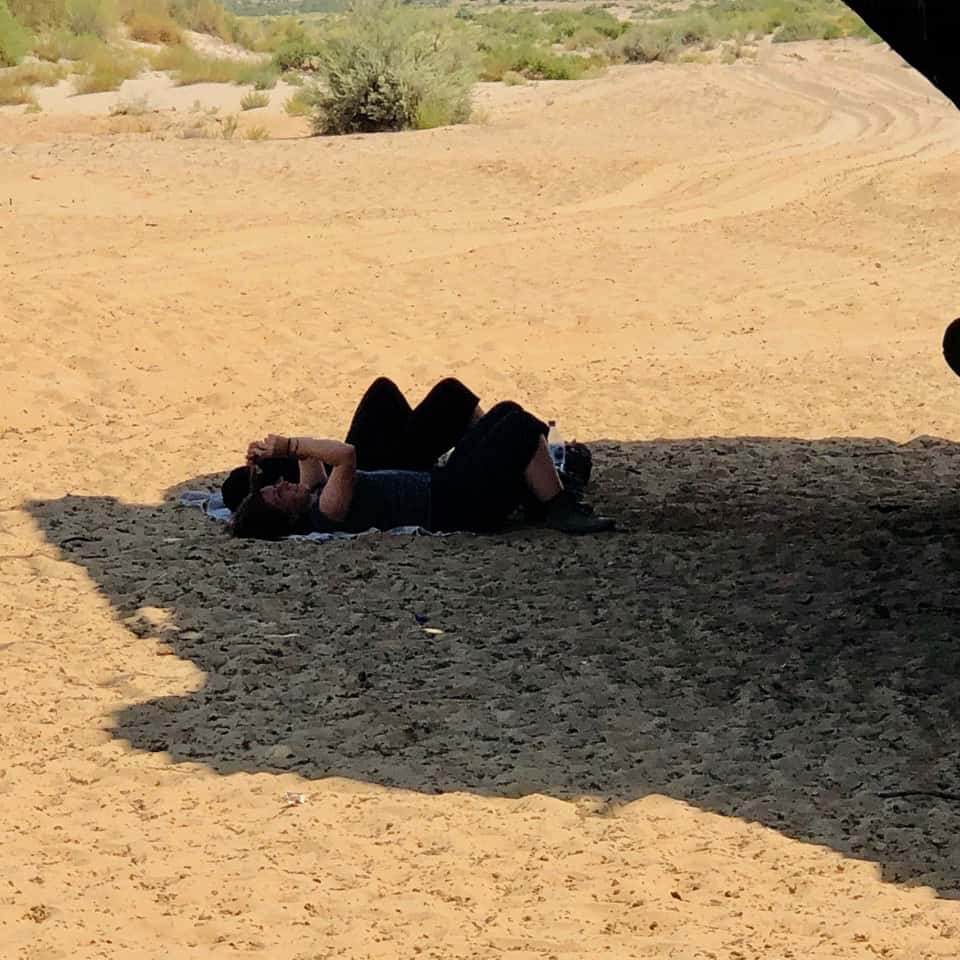 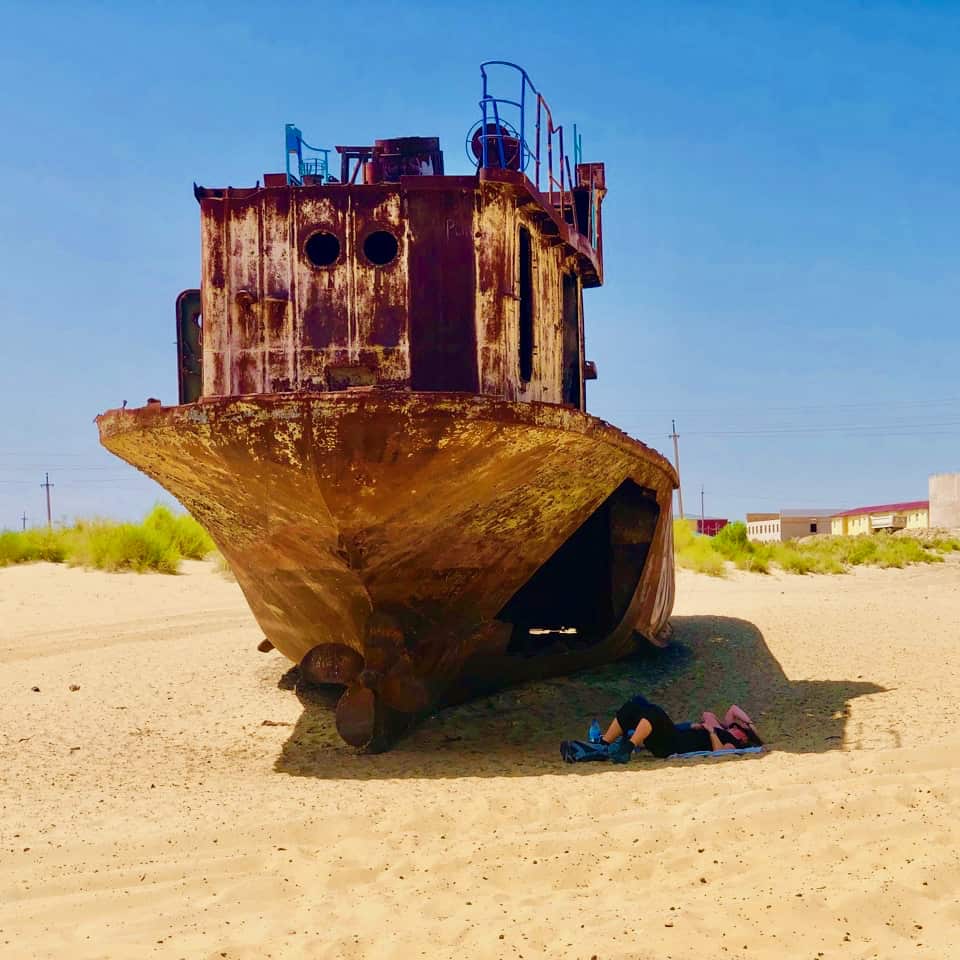 Taking a snap. Taking a nap.

What does the future hold?

The future looks grim for the Aral Sea. Here on the Uzbek side, at least.

However, over the border in Kazakhstan, efforts are being made to breathe life into it once more: in 2005, a dam was built to contain the Syr Darya’s water, the Dike Kokaral. Three years later, the water level had risen 12 metres above that of 2003. Salinity dropped, and once again there was enough life in the sea to make fishing viable. Fish processing plants have been built. In Aralsk, the Kazakh opposite to Muynak, the sea is now only 15 km away. There is hope. Maybe.

Trouble is, outdated agricultural methods are still in use. And then there’s climate change. The glaciers in neighbouring Turkmenistan and Kyrgyzstan that feed the Amu Darya and Syr Darya are shrinking, making water scarcity even more precarious. Less than 10% of the water that flows into the Amu Darya from the Pamir Mountains reach the Aral Sea.

Once there was a sea

Back on the seabed in Muynak, I bump into this little family, working on an art project. A film will be made. Once there was a sea. 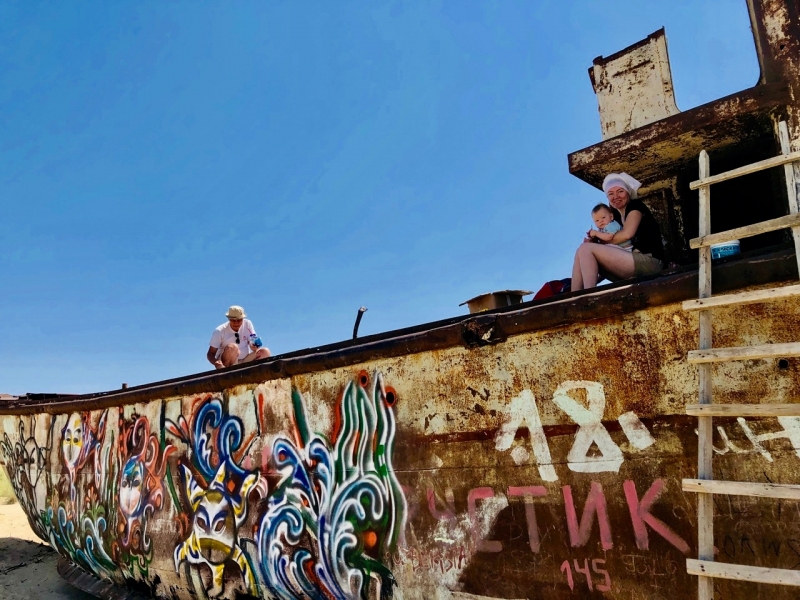 Back from walking along the bottom of the sea: 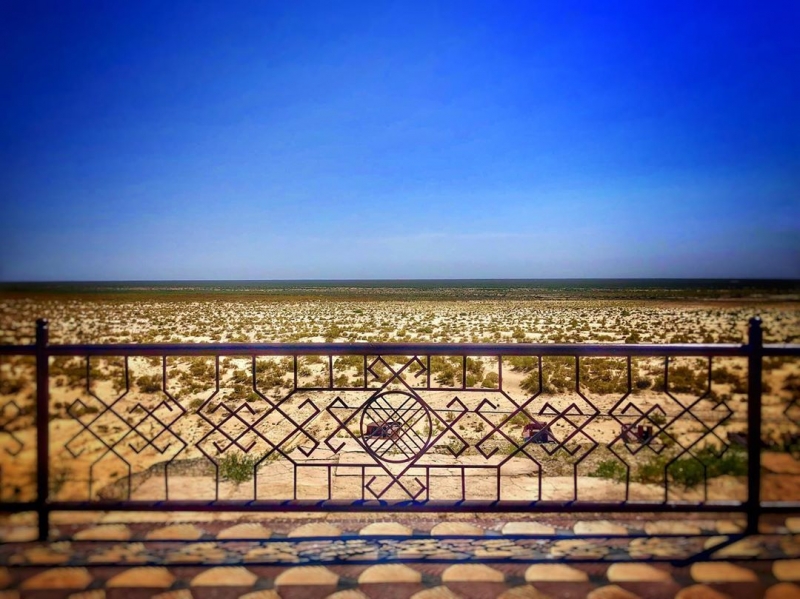 Waves once licked the shore at this harbour lighthouse, no longer needed. We climb to the top for a final view of the sea that vanished. 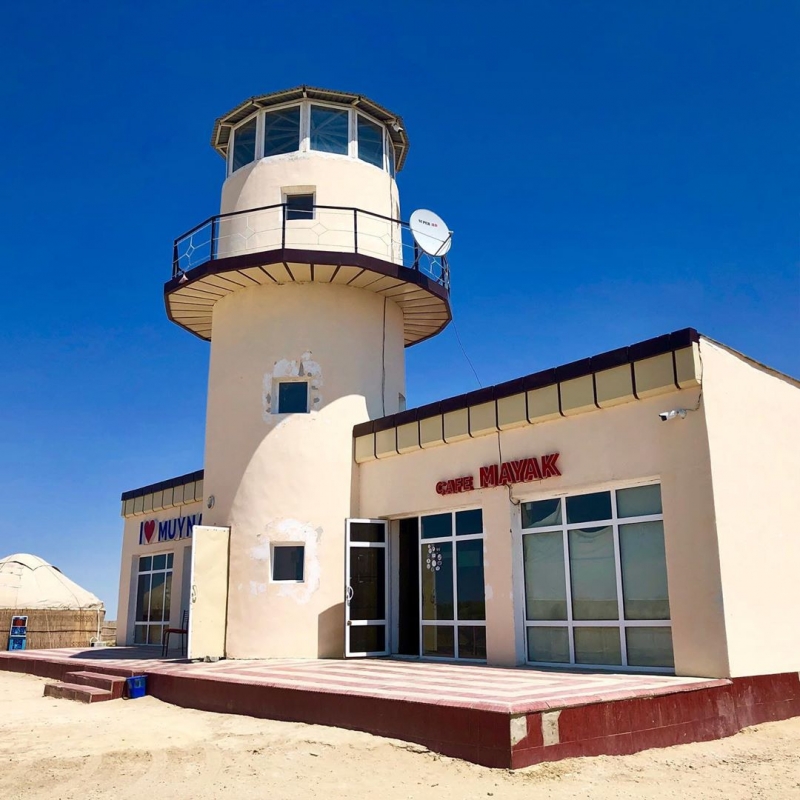 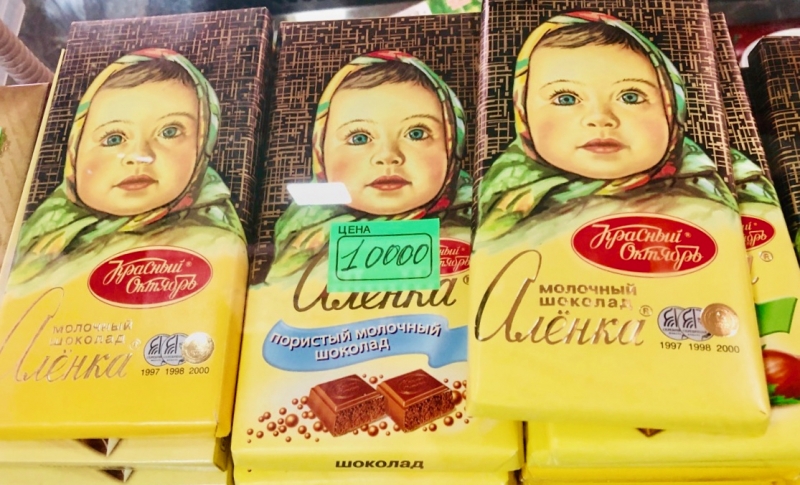 For sale at Cafe Mayak: Alenka, that ubiquitous Russian milk chocolate. I’m forever enthralled with the adorable wrapper baby. (Did you know the chocolate is named after the daughter of Valentina Tereshkova, the first woman in space?)

At the edge of town, the small Muynak Regional Studies Museum is located in an old canning factory. The museum tells the story of this once thriving fishing community: a boat (not gutted), fishnets, stuffed fish and local animals, tattered photos of a once prosperous town, melancholic oil paintings and children’s drawings. It also provides a refuge from the summer heat.

Setting off for the 6-hour drive to Khiva, we’re all rather quiet. The heat? Yeah, sure. But also perhaps because silence is needed to process the enormity of human destruction. An entire sea, gone in one generation. It’s a massive reality check. How could we let this happen?  And, importantly, could we let it happen again? Or have we evolved enough?

The sea’s disappearance is not just a tragedy, as many people have said, it is an active hazard unfolding before our eyes. 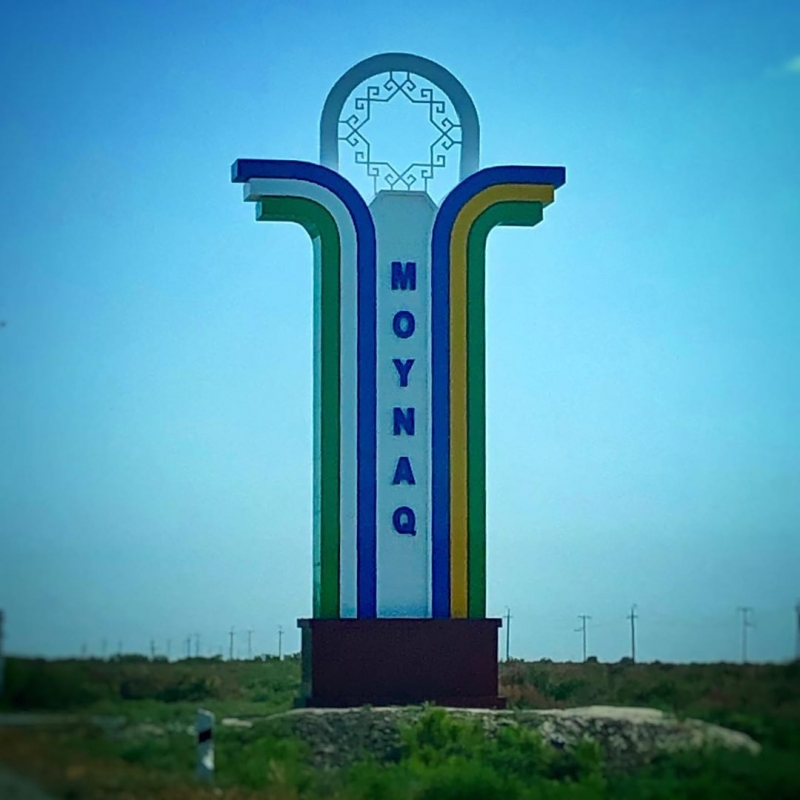 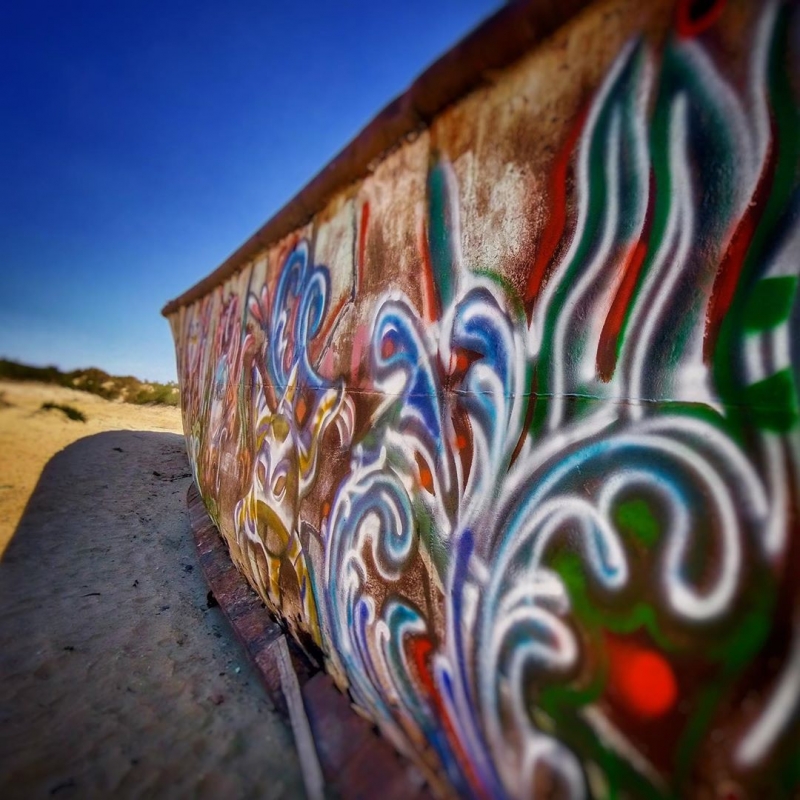 PS: The Aral Sea was the 4th largest lake in the world. If, like me, you’re curious about the larger three, I got ya:

All photos by Andrew Morland, Tom Brothwell and myself.