A new year, folks! With new opportunities. Where do you want to go in this year of lucky 2’s? Or, just as importantly, where do I want to go?

Travel is still limited. Let’s believe this will all end with Omicron the Onerous, though. In 2020, a short road trip in Greece replaced a longer one through Benin, Togo, Ghana and Côte d’Ivoire. Another short journey in 2021, this time a road trip in Poland. And 2022? Pi, rho, sigma, tau, upsilon – you would all be most unwelcome! But enough about bothersome bugs.

West Africa is still on, but 2022 might be a tad optimistic. I’m looking at something easier. Nearer.

You know I like the new, the unexplored! New cities, not knowing what’s around the corner. Thing is, like Johnny Cash, I’ve travelled every road in this here land. ‘This here land’ meaning, well, most of Europe.

So I’m flipping through the pages of old photo albums for inspiration. And there I am reminded of places I know, but not that well. All of a sudden, my options are expanded.

I pause at this picture. 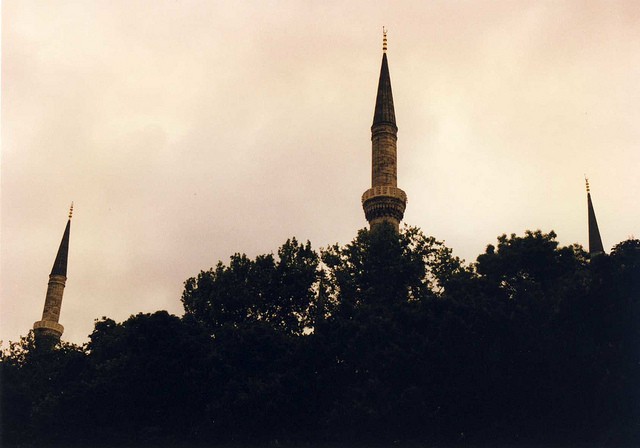 This view of Istanbul: teasing you. ‘Come closer,’ it says. ‘Have a look at my breathtaking beauty, my magnificent structures, the city and the sea. Sniff the spices in my bazaars, delight in the sense of adventure, the feel of having landed in another era.’

Emblematic, this photo. Minarets sticking up above the tree tops. A brief glimpse. Enticing. You want more.

I’ve been in Istanbul on a few occasions over the years – always for short periods of time. Brief glimpses. Enticing. I want more.

This first post in 2022 then, will be about Istanbul. A glimpse. Just prepping the ground for later.

Pics are from 30 years ago. 31! First time. The iPhone camera wasn’t so much as a glint in the eye of Steve Jobs back then… although, who knows, it might have been – whether you like him or not, he was a bit of a visionary. But here, as you can see, we’re true to 1991, with scans of prints.

Just like Pierce Brosnan and the Muppets here, I’m intrigued by the names this exciting city has had through the centuries. There are many.

Remember Pliny the Younger, eyewitness to the horrors of Vesuvius’ eruption in 79? PtheY got around. So did his uncle, Pliny the Elder. In his Book IV, PtheE reels off names of places like it’s going out of style. Let’s have a look at chapter XI in that book:

On leaving the Dardanelles we come to the Bay of Casthenes, the Old Men’s Harbour and the other called the Women’s Harbour, and the promontory of the Golden Horn, on which is the town of Byzantium, a free state, formerly called Lygos; it is 711 miles from Durazzo, so great being the space of land between the Adriatic and the Sea of Marmara.

PtheE gives us the first two names right there: Lygos. And Byzantium.

We don’t know much about Lygos. But we do know about Byzantium. This is how the story goes:

Back in 667 BCE, in the Greek city-state of Megara, King Nisos was keen to expand his lands. (And which king wasn’t?) He asked Pythia the Pythoness, aka the oracle at Delphi, where to find a good spot for a colony. ‘Go to the land opposite the blind,’ said Pythia.

Now, if I had been Nisos, I would have been ticked off. ‘Enough of the riddles already, you annoying git,’ I would have said. ‘Give it to me straight.’

Byzas sailed, and soon reached the Bosporus strait. Soon he spotted a colony on the Asian side of the strait – and Pythia’s enigma became clear. ‘This must obvsly be the city of the blind,’ he thought. ‘After all, they didn’t settle on the other side, and totally missed the shores of Europe. I am so colonising this spot!’ And so he did, naming the city Byzantion. After himself.

And he was probably right. Those who set up the colony of Chalcedon on the Asian side must surely have been blind. Or lazy. Byzantion had major advantages over Chalcedon, controlling access to both the Black Sea and the Aegean.

From Greek to Roman

Onwards to the 4th century CE, the Romans had taken over world domination (the world known to the west, at least). Constantine the Great decided to make the city at the Bosporus strait the eastern capital of his empire. He set to it with full vigour, a massive building project modelled after Rome, seven hills n’all. The city became known by several names now: Roma Nova (New Rome), Second Rome, Eastern Rome, Byzantine Rome, Roma Constantinopolitana, Grand Rome, Sound of Rome… the list goes on. 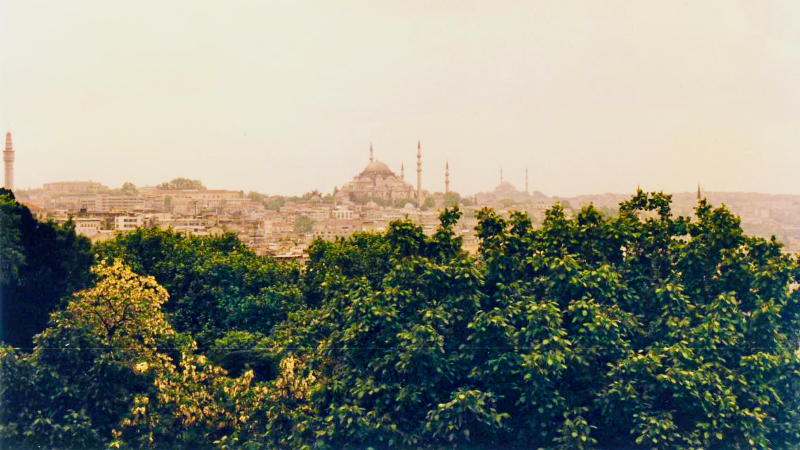 The hills of Istanbul on the horizon here. But it is not enough to see it from a distance, is it? You want to step into the scene. Live in it, even if only for a few days.

After Constantine’s death, it was renamed Constantinopolis in his honour. Constantinople in English. The city of Constantin. Much like we do with major cities today, locals referred to it as The City. Polis.

In the second millennium

In the early 1000s, the city is renamed. Polis –> pol. ‘I sten pol’ = In the city, possibly referring to ‘within the city walls’. Join the three words together and we have Istanbul. The tradition of calling it ‘the city’ seems to have carried on across time. 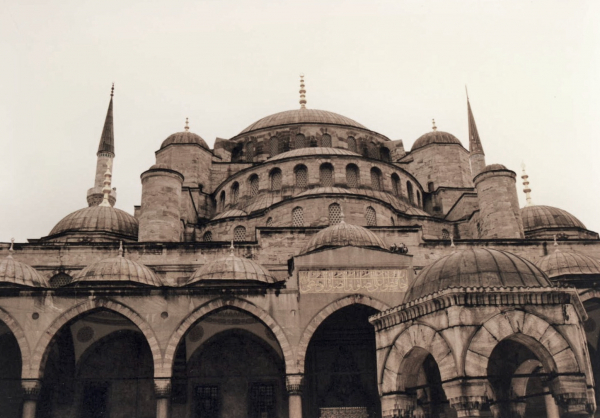 In between and after, the city was known by several other names, as well – but we’re just going to go ahead and skip’em, lest this gets really boring.

Except… since I’m Norwegian, I’m going to mention the name my trading ancestors used in those days. Viking king Sigurd Jorsalfar called it Miklagarður. Miklagard. That name is still retained to a certain extent in Icelandic and Faroese today, the languages that most resembles Old Norse.

During Ottoman rule, the old name Constantinople made a comeback. Then, in 1929, the new Republic of Turkey reverted to calling it Istanbul. As Pierce and the Muppets sing:

And whichever name you like the best (I’m rather partial to Miklagard myself), that’s about the gist of it. Nobody’s business but the Turks.

Moving forward to 1991, I arrived by sea from the port of Varna in Bulgaria, having hitched a ride with a freighter. It was a fun journey: eating stew with the crew, drinking raki and playing cards long into the night. Only to get up a few hours later. To see this. The strait between Europe and Asia at dawn. What Byzas must have seen all those years ago. Minus the bridge. 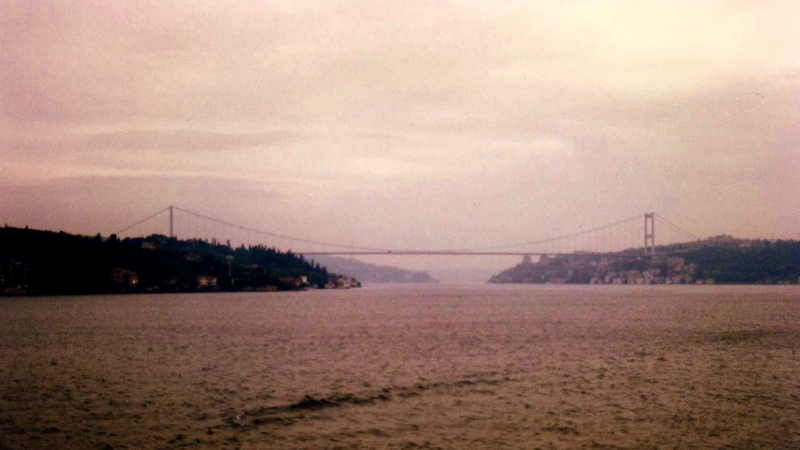 Entering the Bosporus Strait from the Black Sea at dawn on a fine May morning in 1991.

The freighter was heading back to Varna the same night, and I had to be on it, as I had a flight home the day after. Meaning I had but a day in town. A good part of it was spent in the bazaar, haggling and drinking mint tea and Turkish coffee. Had to get ready for another night of cards, after all.

I’ll leave you with this, eh, vintage, snap. 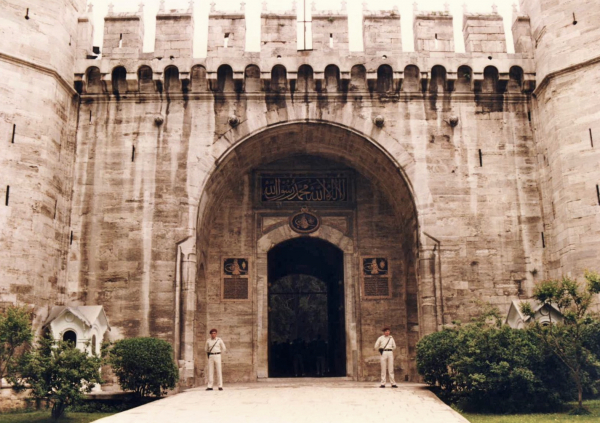 Maybe a closer look and feel of Istanbul in 2022, then. With many more photos. Better photos. Will keep you posted.