From Trier in Germany’s Moselle Valley, I have now stepped across the border into Lorraine – to Nancy, capital of the French département Meurthe-et-Moselle. My goal for the day is the city’s three famous squares: Place Stanislas, Place de la Carrière and Place d’Alliance.

Just a 10-minute walk from the railway station, the largest and most magnificent of the three is Place Stanislas, built in the 18th century as a bridge between the medieval part of town, and the then new town.

An ornately gilded wrought-iron gate is the first thing you see when you approach Place Stanislas. 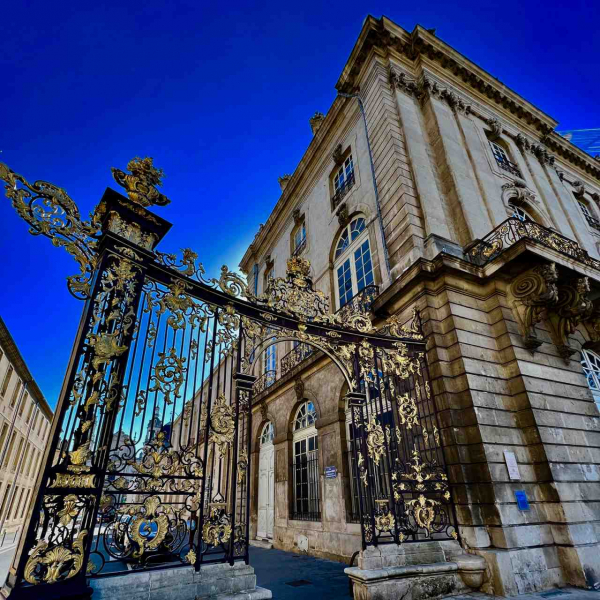 125 x 106 metres, so not an exact square. But close enough. Gilded gates, statues, fountains, lovely lamp posts and beautiful buildings along all sides. 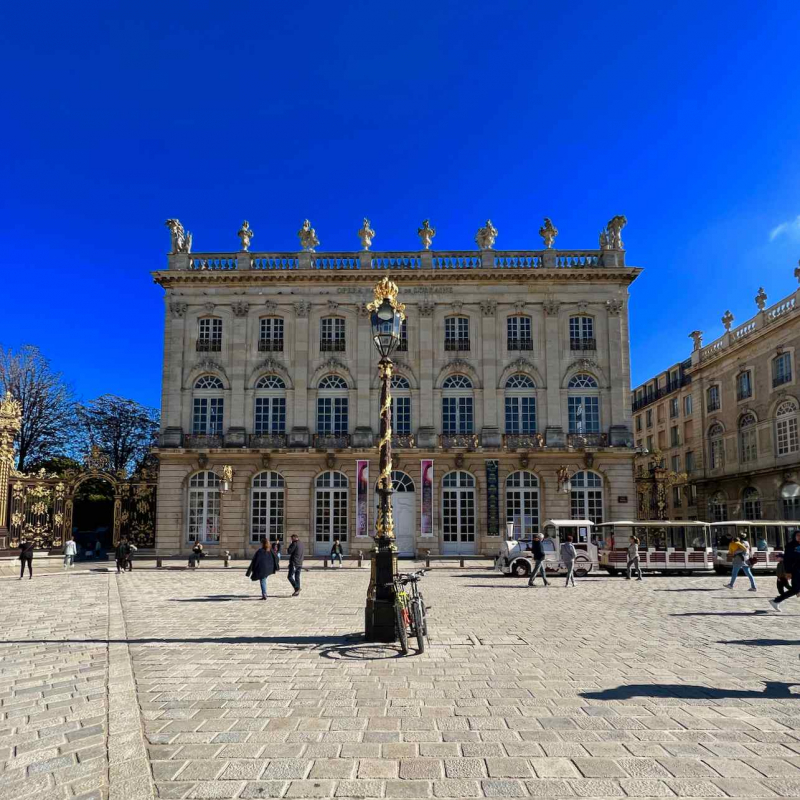 But the name?  Stanislas doesn’t exactly sound French, does it?

There is a story there, of course. And an interesting one at that.

There once was a King of Poland (who was also Grand Duke of Lithuania). Stanislaw was his name. King Stanisław I Leszczyński, to be precise. And not only was he king, he was king twice. Non-consecutively. From 1704 – 1709, and then again from 1733 – 1736. We’ll not get into the whole War of the Polish Succession here; suffice it to say Stan was forced to abdicate. As compensation for losing the Polish throne, he was given the duchies of Lorraine and Bar (also in present-day France).

In between his two reigns, you see, his daughter Maria married Louis XV, king of France. Only natural then, that he would choose France as his home in exile. And his son-in-law allowed him to govern Lorraine like a kingdom. Stanislaw made Nancy his capital and transformed it into a contemporary city, with palaces, villas, public parks and, not least, squares.

The grand Place Stanislas became the heart of the new city, an elegant space and venue for public assemblies, feasts, fairs and the like. He was an enlightened one, our friend Stan, aware of what the public needed and wanted. On or near the square is an opera, a library, a botanical garden, and more. All beautifully created by architect Emmanuel Héré, between 1752 and 1756. An outstanding example of urban planning right here in Nancy. 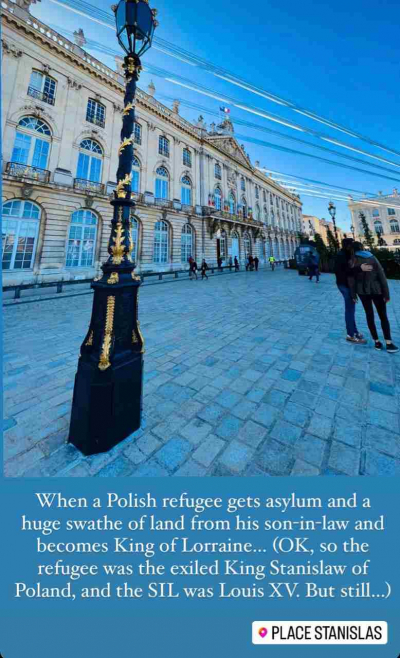 In the middle of the square stands none other than Stanislaw, in all his glory. 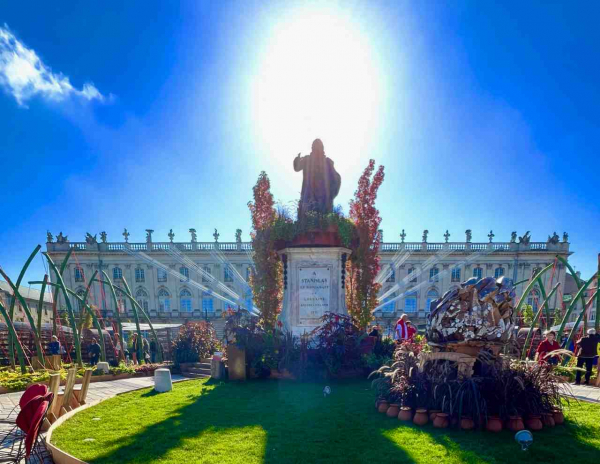 Well, can’t stay here all day. We have two more squares to explore, folks. But first, a spot of lunch. A quick bite, however much of a paradox that is here in France. There are several cafes and restaurants to choose from on the square, many (if not all) serving quiche. What else…? 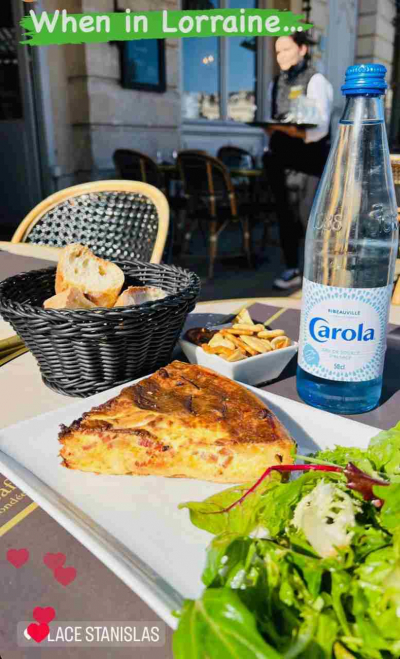 The other two squares are both a few minutes’ walk away – one to the north, one to the east.

Our friend Stanislaw had an Arc de Triomphe built, in honour of his generous son-in-law, King Louis XV. The arc is also known as Arc Héré, after the architect.

We’ll go through the arc – 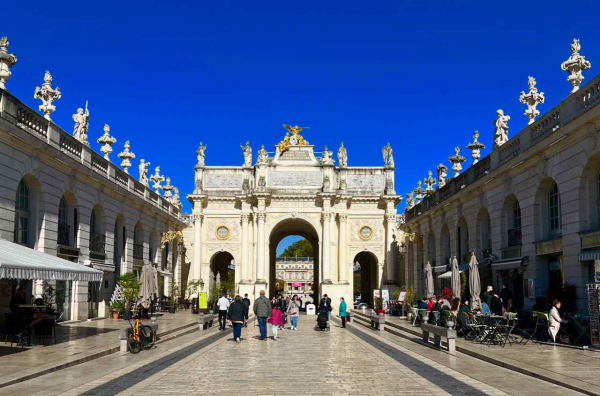 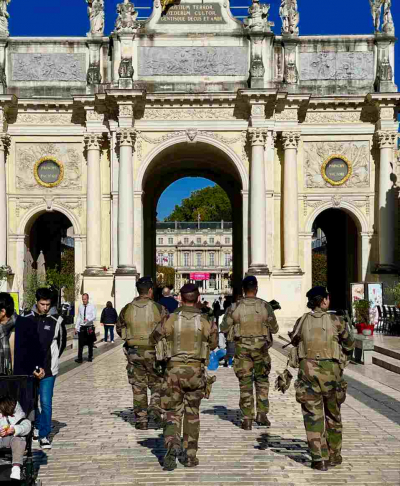 – and hey presto, we are on Place de la Carrière. 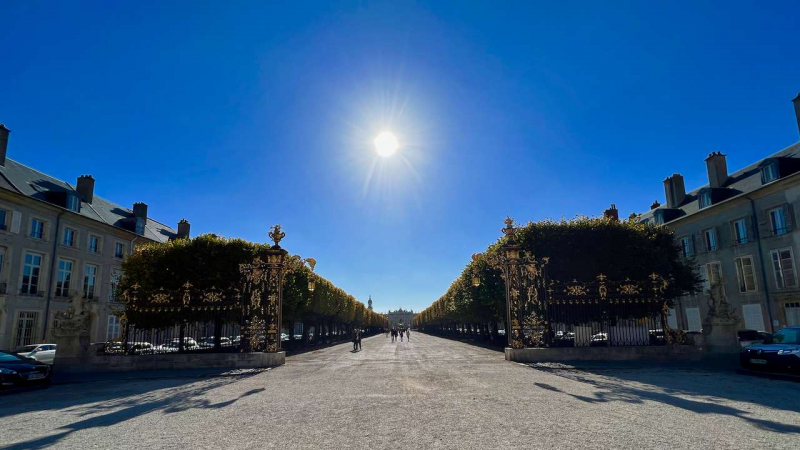 Place de la Carrière is the classical of the three squares, 290 metres long and 50 metres wide, surrounded by mansions and linden trees. Carrière means race course. Back in the day when Stanislaw ruled the land, this square was used for riding competitions and tournaments. 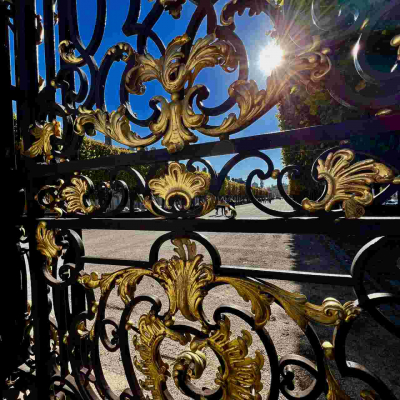 As do fountains and sculptures of children. 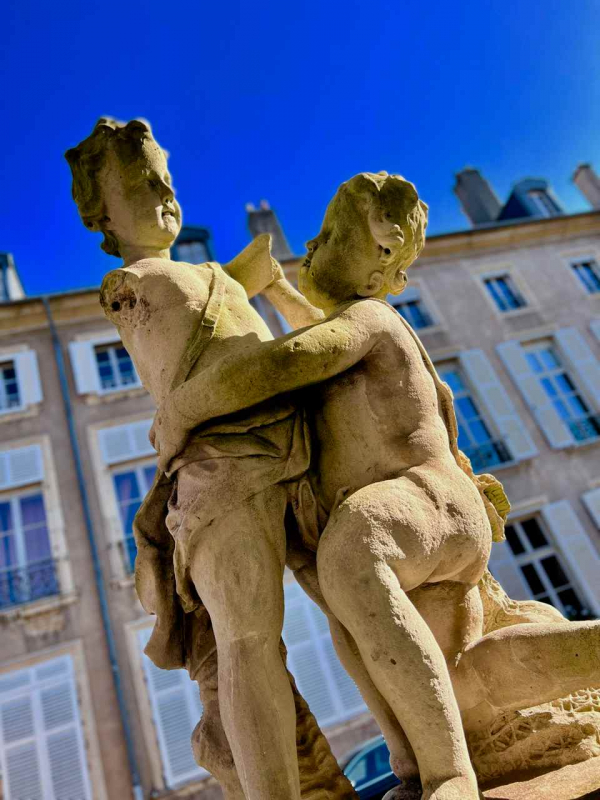 At the northern end of the square is Palais du Gouvernement de Nancy. 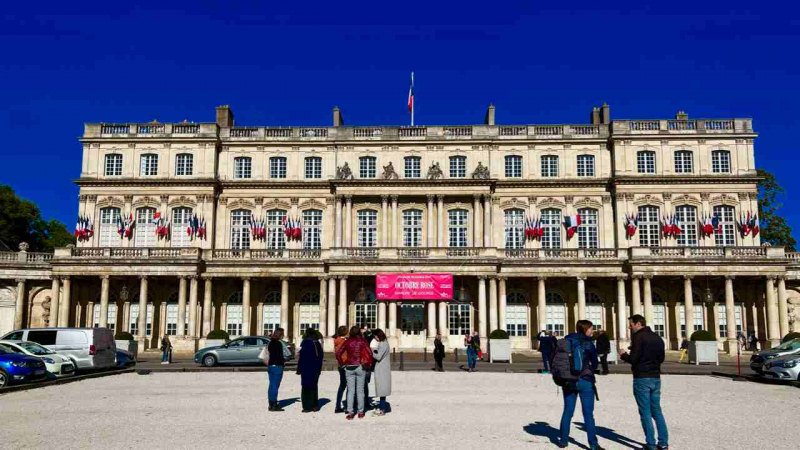 And so we have a long straight line between Hôtel de Ville on Place Stanislas and Palais du Gouvernement on Place de la Carrière. 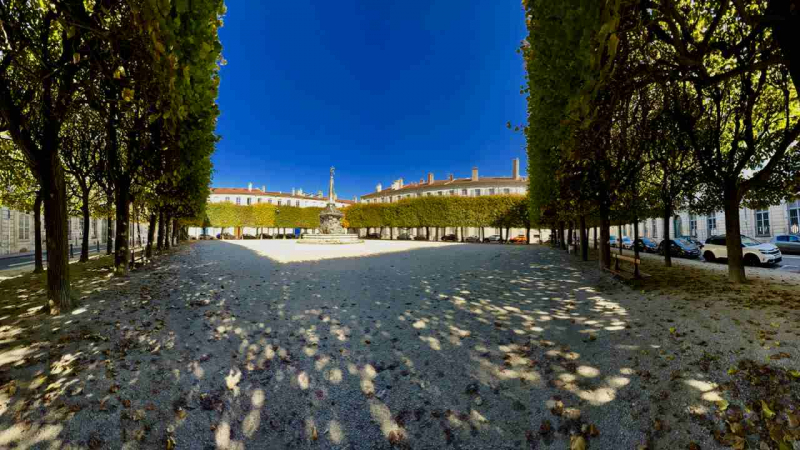 The third of Emmanuel Héré’s squares is a 3-minute walk east of Place Stanislas. Built on King Stanislaw’s kitchen gardens, Place d’Alliance is lined with trees, and much less busy than the other two. Somewhere to go if you want to ponder in peace. The square was named after the alliance treaty between France and the House of Habsburg in 1756; a treaty that ended centuries of warfare.

The most notable feature on Place d’Alliance is this baroque fountain, modelled after Fontana dei Quattro Fiumi on Piazza Navona in Rome. 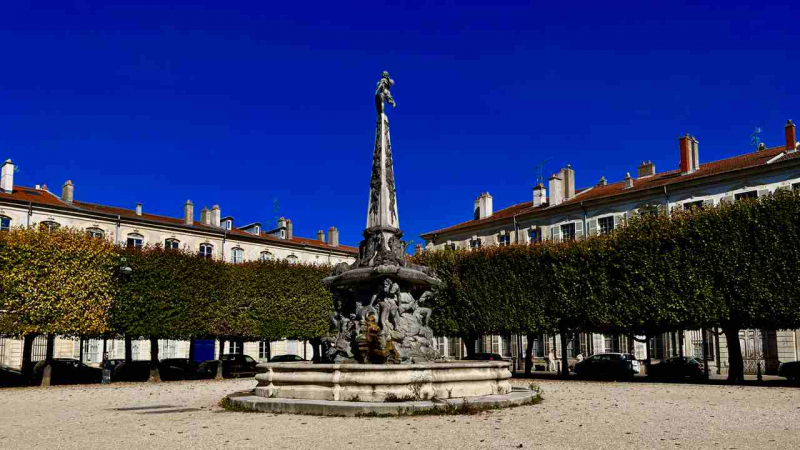 I really should be getting on, since I have a dinner date in a few hours. In another country! Can’t resist that main player of Nancy’s royal squares, though, so I go through yet another golden gate for one final look. 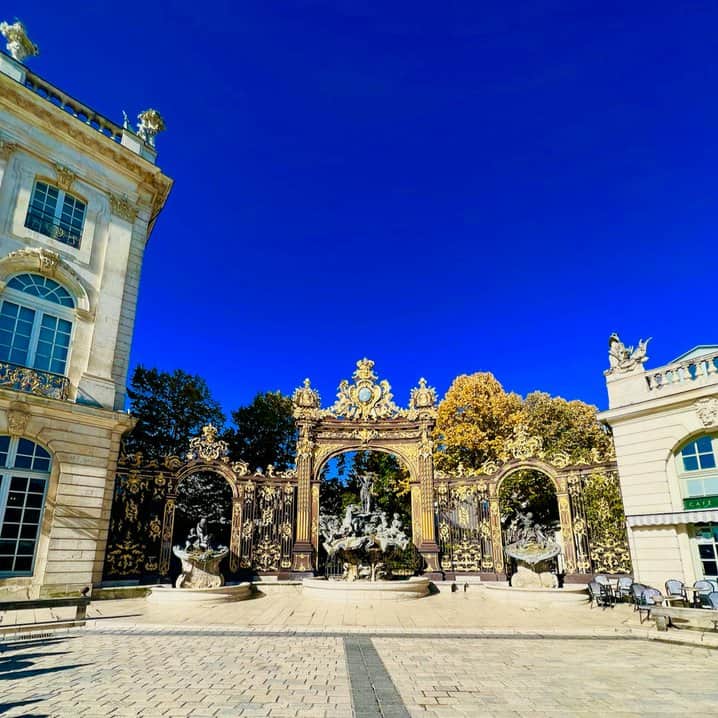 Nancy is not exactly a tourist magnet; nothing like Paris or even Strasbourg. Surprising, really. It’s a charming city, one that has much more going for it than three world heritage-listed squares, including (but not limited to) being a university city with close to 50,000 students, and a hub for Art Nouveau architecture (which I adore), thanks to the designers of the École de Nancy. 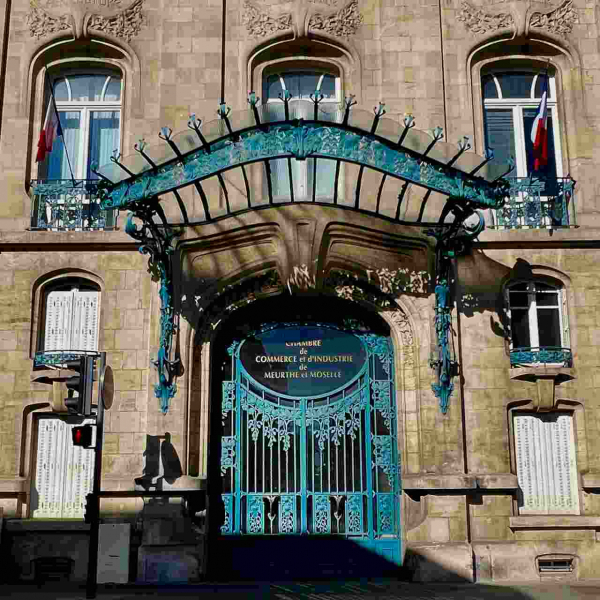 – and across the spacious Place Thiers (pedestrian, of course), 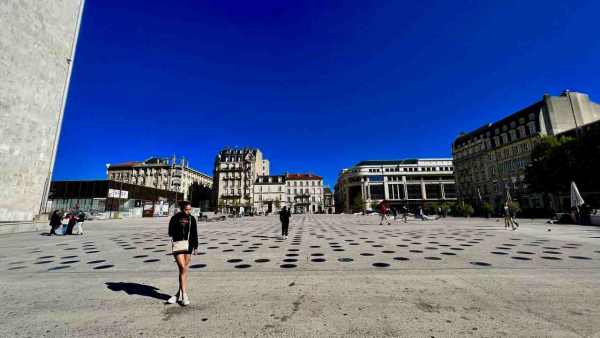 to the railway station. 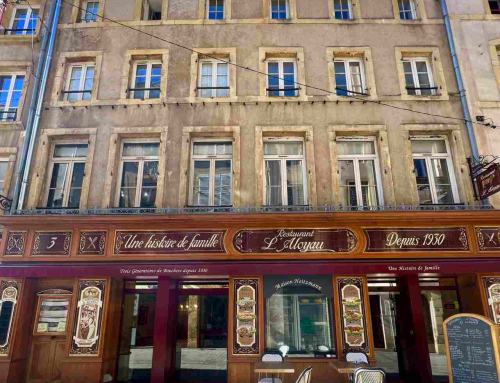