I’m frequently asked which is my favourite world heritage site. My reply always used to be that there are so, so many. Then I went to the Orkney Islands. And discovered there was one that stands out, after all; the one that speaks the most profoundly to my imagination: 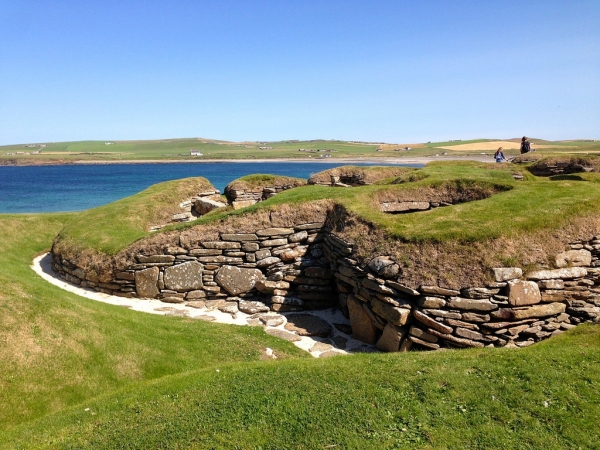 Skara Brae, a Neolithic settlement in the Orkneys, was inhabited from ca 3100 BCE to 2500 BCE. Older than Stonehenge. Older than the pyramids. A village, an entire community that has left us some of the oldest surviving structures in the world. Homes, with kitchens, bedsteads, hearths, cabinets, 5000-year-old everyday household items! 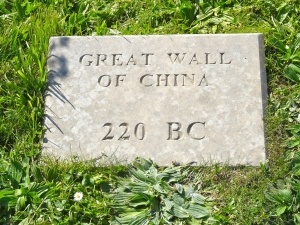 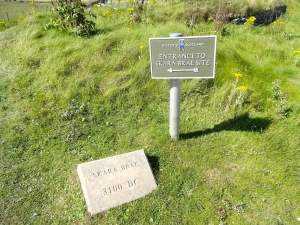 Drama through the ages

Skara Brae is a dramatic site – and its discovery no less so. I’m met with a sign bearing these words:

In the winter of 1850 a wild storm lashed the Bay of Skaill. As great gusts of wind roared along the shore, they ripped the grass and sand from a high dune known as Skara Brae. What was revealed has proved to be one of the most remarkable discoveries of our time. For beneath the dune, lay the ruins of a 5000 year old farming village. 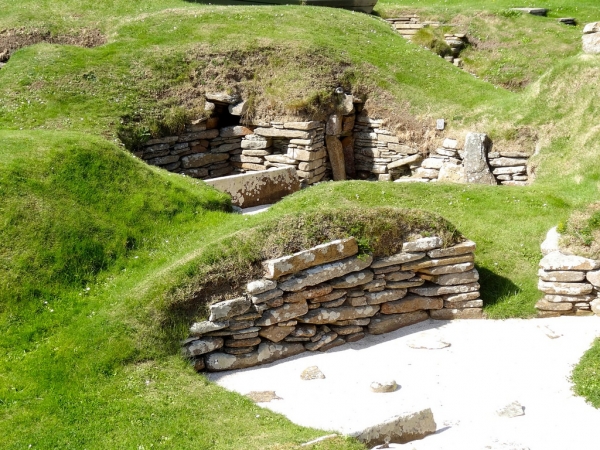 Sadly, the drama isn’t over. Climate change means many important places are in danger, but none more so than those along the coast. Heavy rains, increased storms, coastal erosion and rising sea levels means this might all vanish into the sea.

As an example, a Neolithic tomb on the island of Sanday, a bit further north in the Orkneys, is located on an eroding cliff. Five feet have disappeared into the ocean during the last 35 years – and the remaining 40 feet are on the same path to oblivion.

On the far curving shore of the bay lies Skara Brae, hazy through the sea-haar.

Let’s play with it a bit:

You’re living in the Stone Age. It’s a lovely summer morning. You’ve just woken up, made yourself a cup of whatever was the equivalent of coffee 5000 years ago, (perhaps mead or ale, leftover from yesterday’s feast) and taken it outside for a bit of fresh air. Close your eyes. Now, open them. What do you see? This! This is what you see. Top of the morning to you. 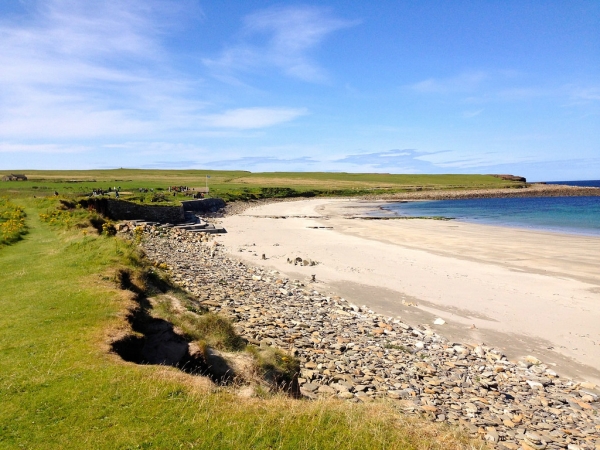 All houses were built to a rectangular plan, partially sunk into the ground, with low doors which could be bolted from the inside with a piece of wood or a whalebone. A roofed, stone-lined passageway linked all the houses, like a street. Access to the house was through a door facing the passageway. 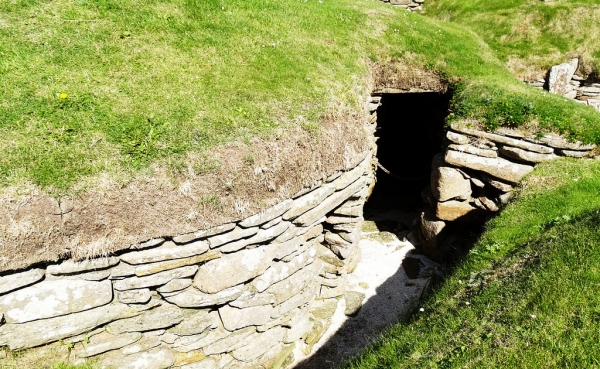 All the houses had the same basic set-up: one large room with beds on the sides, a fireplace in the centre, and a dresser with shelves opposite the entrance. There was a drainage system as well, with a simple indoor loo. 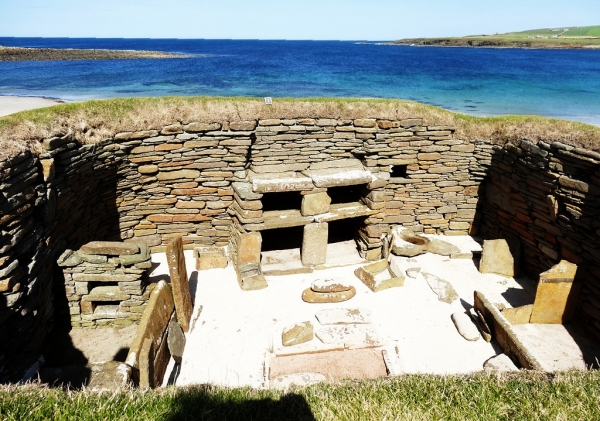 Who were they, the people who settled here in 3100 BCE?

They lived by the ocean, prime property even then (though probably less for style, more for substance). They were farmers, hunters and fishermen. Deer and boar roamed the area, and seals on the beach, perhaps the occasional beached whale, birds, eggs, fish – a protein-rich diet, it would seem. Inside the houses were found carved stone balls, mace heads (decorative stones), figurines, other works of art. And games. Feed the body and feed the mind. Same as now. Same as always.

Skara Brae has the markings of a planned community. A smaller version of Canberra, perhaps? Or Milton Keynes? All the houses were more or less the same size, suggesting an egalitarian society. Somewhere along the way, that ideal got lost. I’m wondering when, where, how, and most of all, why. 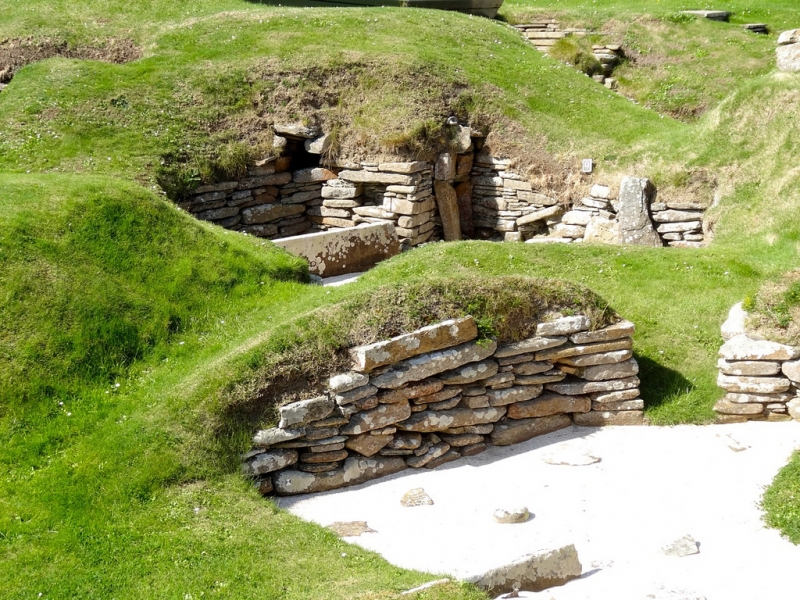 Why did they leave? Some researchers claim there’s evidence of a hasty departure; that they might have fled from an impending natural disaster, like a particularly fierce storm. Some even likens Skara Brae to Pompeii. And while that thought is proper fodder for the imagination, others say this is speculation, and that the settlement simply was abandoned for reasons unknown.

When visiting this site, you can’t enter the houses, as they are very fragile. You can only see them from above. However, there is a replica. I walk in through the passageway, like the locals did 5000 years ago. Stone walls, sheep skins on the bed, a hearth in the middle. It feels snug and safe. Reminds me of an old-fashioned Norwegian cabin in winter: all cosy and homey, just light up the candles and boil some eggs on the fire. 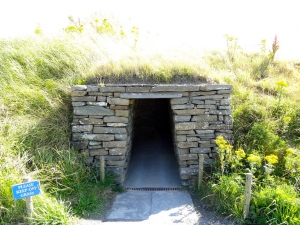 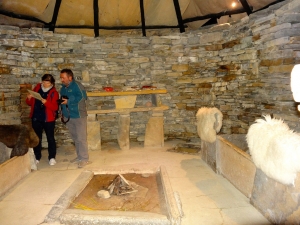 PS Forgive the atrocious quality of this photo; just had to share: info at Skara Brae is in German, French, Italian, Dutch – and Norwegian. Weeeee!! 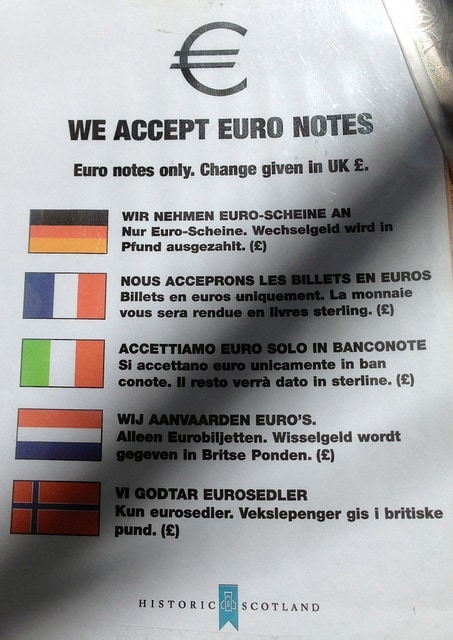 PPS For a more contemporary feel – a look at 1950s Britain – it is possible to explore Skaill House, home of the man who unearthed Skara Brae and his descendants. 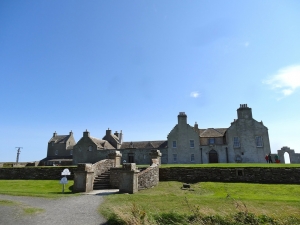 Did the properties closest to the beach cost more, I wonder… or perhaps just the opposite? 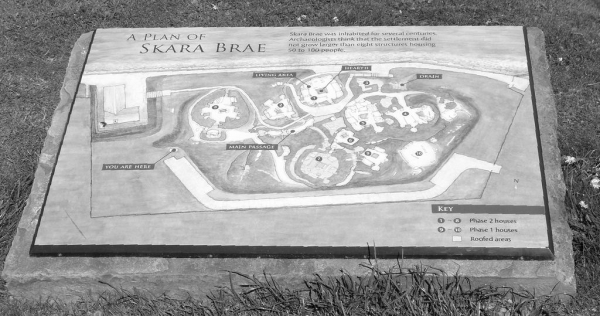 The site also comprises Maes Howe, a large grave chamber, as well as two stone circles, the Ring of Brodgar and the Stones of Stenness.

An 11-minute drive from Skara Brae (or 2-hour walk, if you’re so inclined), is the equally mysterious and equally ancient henge, Ring of Brodgar. 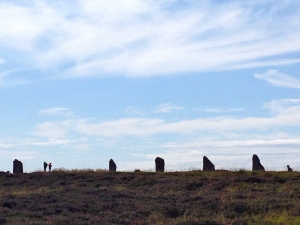 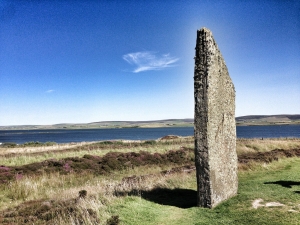 Once upon a time, taggers took a bit more pride in their work. 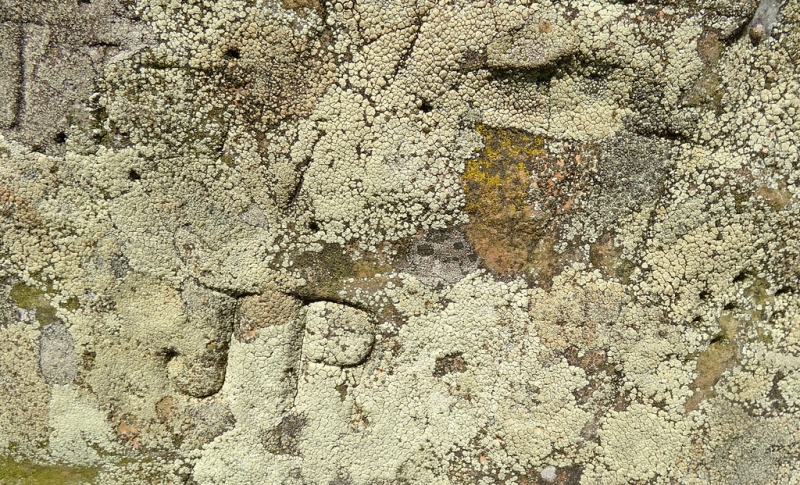 In fact, graffiti from as far back as the Viking invasion has been discovered here at the Ring of Brodgar. You can find the name Bjørn carved in stone, and there’s a cross and anvil. (Bjørn probably shouldn’t have done that…. but at least it isn’t spray paint)

During the Viking Era, the womenfolk took care of the farm. They managed everything, including their husbands, when hubby wasn’t traipsing about the world, that is. Now, let’s hop back in the imaginary world once again:

A Norseman, Bjørn presumably, wanders about here 1000 years ago, and feels the urge to leave his mark on the then 4000-year-old stones. (Though in his defense, he probably didn’t know that). Close your eyes for a few seconds. Can you see him in your mind’s eye? I can. About 172 cm tall (5′ 8”). Reddish brown hair. Well-groomed beard. A scar down the right side of his face. Muscular, especially upper body, from all the farm work at home and you know, rowing across the oceans. Long linen shirt, knee-length trousers, a wool coat. Carrying some protective weaponry; a bow and arrow, I like to think. And carving tools, obviously.

And the Stone Age villagers? Takes a bit more imagination, that. A man again, perhaps a little shorter than Bjørn; about 165 cm, say (5’4”). Other than that, not that different. Muscular, a short beard, about the same hair colour. Clothes: less wool, more leather.

Can you see them both at the same time? And yourself? It feels as if it’s all now, doesn’t it? As if you’re all here. Just now. A villager walking along the beach in 3018 BCE, a Viking traveller in 1018, you in 2018… Time really is irrelevant. 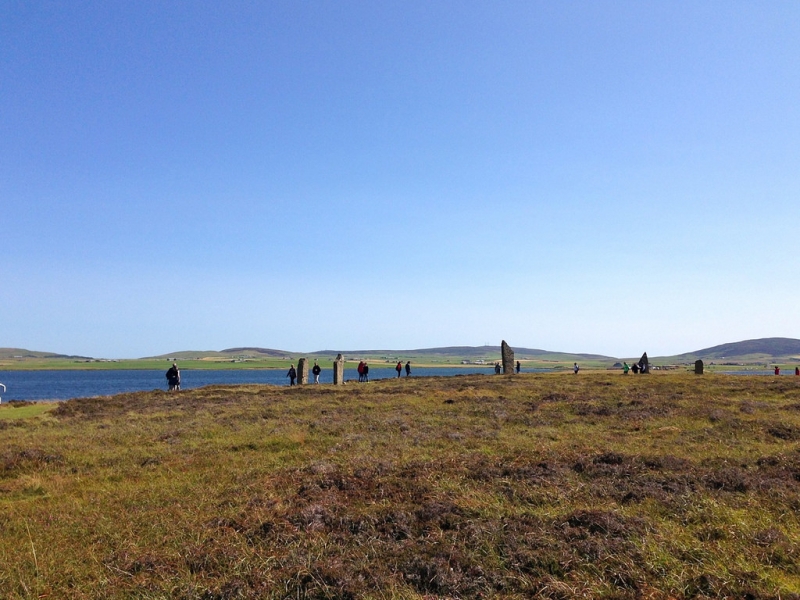 A further kilometre away is the Standing Stones of Stenness, probably the oldest henge in Britain. Carbon dating suggests 3100 BCE. What were they for, these stones? What took place here? Again, we have to resort to fantasy. Instead of subjecting you to more of my imaginary ramblings, I’ll let archaeologist Harry Aubrey Woodruff Burl, leading authority on British stone circles, have the final word:

Let us imagine, then, families approaching Stenness at the appointed time of year, men, women and children, carrying bundles of bones collected together from the skeletons of disinterred corpses–skulls, mandibles, long bones–carrying also the skulls of totem animals, herding a beast that was one of several to be slaughtered for the feasting that would accompany the ceremonies.

Rites of the Gods

PPSS How about Maes Howe, you say? Time constraints, strict prioritisation, always good to leave a little something for next time. And there will be a next time in the Orkneys. Before they build a bridge to replace the world’s shortest flight.