This week’s #frifotos* theme is cars, and I’ve had fun playing with Alexandra‘s photo of a classic New Orleans streetcar on Canal Street.

New Orleans streetcars have rambled through the city for almost two centuries. This one, the Canal Street Line, began operations in 1861 and provided horse-drawn service to the people of New Orleans. Couldn’t have been easy being a horse in those days. 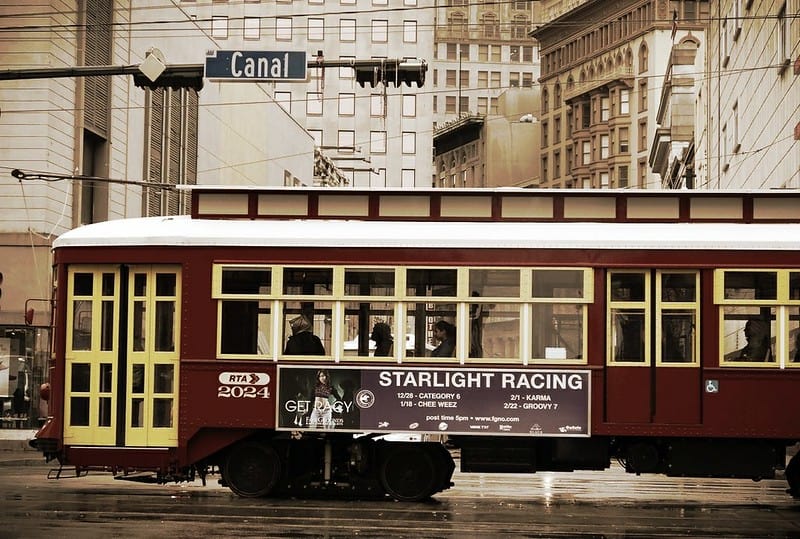 The most famous New Orleans streetcar

The most famous streetcar line is probably the one that for a few decades at the beginning of the 20th century plied through the French Quarter down to Desire Street. Somewhat sadly, this New Orleans streetcar was replaced by busses in 1948. But it lives on in people’s minds, thanks to Tennessee Williams. In the words of Blanche duBois:

What you are talking about is desire – just brutal Desire. The name of that rattle-trap streetcar that bangs through the Quarter, up one old narrow street and down another.

Tennessee Williams is also reputed to have said the following:

I expect that didn’t make him especially popular.

I’ve never been in Cleveland, but I’ve been in quite a few American cities. From my days living in the USA, I remember these three as the only cities where I saw people outdoors: out and about, doing their shopping on foot, walking to work, to school, to play….

I imagine things might have changed since Tennessee’s days – and even since my days. What do you think?

Are people out walking in your city? Or is the famous author’s statement still valid?

*#FriFotos is a weekly Twitter chat founded by @EpsteinTravels where travellers share their favourite photos. Each week has a different theme.

Disclosure: In New Orleans, we were guests of New Orleans Convention & Visitors Bureau. As ever, we’re free to write about anything we, well… desire.