World at a Glance: The Memorial in the Engadin Valley

I’m off to one of my favourite countries soon, invited by Visit Switzerland. Looking forward to seeing Geneva again, through the eyes of a tourist this time (rather than spending all day in committee meetings and the like). Also looking forward to visiting Lucerne, long on my wish list, famed covered bridge, lion monument, all round stunning landscape, everything.

Thumbing through photos from earlier visits in the country, I’m reminded of a little memorial I once saw in the Engadin Valley, on Piz Nair mountain just above St Moritz.

Every once in a while, I stumble upon commemorative markers to people unknown (unknown to me, at least). Walking on Piz Nair, I spotted a glass box off in the distance. Virtually drawn over, I was. By a strong impulse. Curiosity, I suppose. And maybe something more. There was no way I was not scrambling over to investigate. 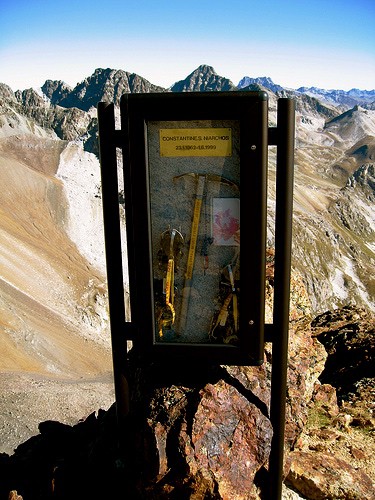 What I found was a glass-enclosed pickaxe, a pair of crampons, a photo of a mountaineer and a Greek flag. Above, the words Constantine S. Niarchos 1962 – 1999 on a brass plaque. On the ax handle were inscribed the words Mount Everest 13.5.1999.

Wondering who this was, I asked the waiter at the Panorama Restaurant up by the cable car station. Constantine was a shipping billionaire, I learned – and the first Greek to summit the world’s highest mountain. He loved the Engadin Valley so much. He had also contributed financially to building the restaurant, and even had a chambre separée here for high altitude dining.

Had he died in the Himalayas, then? Altitude sickness? Or perhaps fallen off the mountain on the descent, like young Francis Douglas at the Matterhorn?

Back down in St Moritz, I searched for further info about this man I didn’t know existed just hours earlier – and found a few articles, such as this one from The Independent. The story didn’t have the dramatic ending I had imagined. Turns out Constantine died of a massive drug overdose (more than any recreational user in history) in his London flat just two weeks after conquering Everest. 13 May: top of the world, 31 May: death by eating cocaine. Eating it!

I’m not going to turn this into a philosophical piece about questioning your purpose in life, about the challenges you face after you’ve reached your highest goal (now what?) – or about the loneliness of the very wealthy. I am not going to speculate about what drives an accomplished young man to inhale and swallow enough cocaine to kill 25 men.

Just a momentary lapse into melancholy. For someone I didn’t know…

World at a Glance is a series of short articles here on Sophie’s World, with a single photo, portraying curious, evocative, happy, sad, enchanting, wondrous or unexpected encounters.