World at a Glance: While we’re waiting for Nobel…

The Nobel Peace Prize is frequently called the world’s most prestigious prize. 278 have been nominated this year, the highest number ever (these can nominate). The Norwegian Nobel Committee, who makes the decision, is obliged to keep the list of nominees and nominators secret for 50 years, according to the terms of Alfred Nobel’s will.

The nominators are under no such obligations. And then there are speculations. Two favourites this year are Pope Frans and Malala Yousafzai. Other faves are the many nominated gay rights’ activists (from Russia, Uganda and Nepal, as well as the ILGA – The International Lesbian, Gay, Bisexual, Trans and Intersex Association). Two slightly controversial nominees are Julian Assange and Edward Snowden. And then there’s Vladimir Putin.

Since February, the five members of the committee have been hard at work choosing this year’s laureate. Most likely, they’ve made up their minds by now. The announcement will be made this Friday at 11am CET, just a few hundred metres from my office here in Oslo. 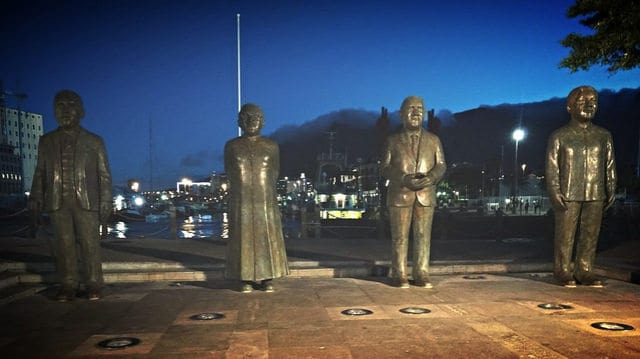 If we were to rank the laureates on popularity, I’m willing to bet Nelson Mandela would be very high on the list, maybe even at the top.

Four Nobel Peace Prize recipients hail from South Africa. That’s quite an impressive number; only six countries have more, all wealthy and Western.

You can find Mandela at Nobel Square, on the V&A Waterfront in Cape Town, along with South Africa’s three other laureates,

All four played important roles in transitioning South Africa from apartheid to democracy.

The bronze statues were created by local artist Claudette Schreuders and all have inscriptions. Mandela’s read

Never, never and never again shall it be that this beautiful land will experience the oppression of one by another.