Hammerfest: the northernmost city in the world

“Reindeers have the right-of-way,” they grunt, these two, as they cross the road in front of me, forcing me to hit the brakes hard enough for the seat belt to really fasten. They then proceed to attack someone’s front garden. No need to trim bushes here. 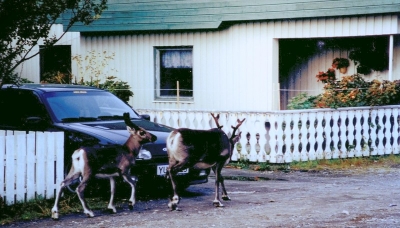 Driving into Hammerfest on a sunny September afternoon, I immediately take to it. The wooden houses are a veritable palette of colours. A bright green house has a steep roof which looks fun to slide down on a brisk winter’s day. A midnight blue one with latticed windows peek through trees behind a white picket fence. This is cosy!

Through my windscreen, I spot at least four people busy painting houses. The fierce weather up here requires frequent coats of paint, so you might as well be creative and bold. If you don’t like the colour, you can always change it next year.

Very few buildings pre-date World War II. Towards the end of war, the retreating Nazis weren’t going to make it easy for the advancing Russians. Still, they burnt most of Northern Norway, Hammerfest included. However, the inhabitants weren’t deterred. After the war, they bravely returned to the devastated city and rebuilt it. It’s a story of courage and optimism and this spirit is noticeable even today.

The northernmost city in the world 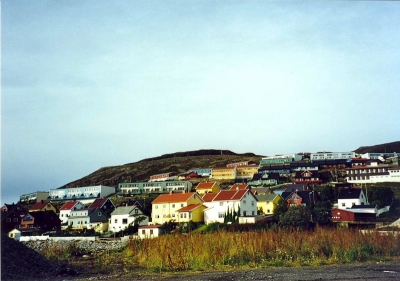 At 70° 39′ N, Hammerfest has long been considered the northernmost city in the world. But is it? There are certainly settlements further north in the world. At 78° 13′ N, Longyearbyen on Svalbard is the furthest north of them all.

But what’s a city anyway? Longyearbyen has a mere 2000 residents. Hammerfest, on the other hand, was granted city status as far back as 1789, and with nearly 10000 inhabitants, it’s at least safe to say Hammerfest is the northernmost city in the world of a significant size. Former deputy mayor Kristine Jørstad Bock once summed it up:

“It lies in the soul of everyone in Hammerfest that they live in the world’s northernmost city. We are born and raised with that.”

Do polar bears roam the streets of Norway? 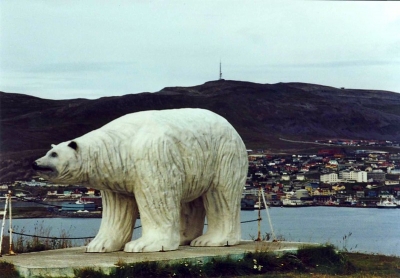 Arriving in town, I’m greeted by a large polar bear. Not a real one; contrary to popular belief, polar bears do not roam the streets of Norway. At least not here on the mainland.

Whilst you are here, you can join the Royal and Ancient Polar Bear Society, founded in 1963 and committed to preserving the Arctic way of life. You can only join by showing up, so the silver and enamel membership pin is quite exclusive.

The Barents Sea and the natural harbour have always been the basis for life up here. Shipping and fishing are the traditional industries, supplemented by natural gas. Since the 2006-opening of Snøhvit Natural Gas Field, just 140 km offshore, Hammerfest has become somewhat of a boomtown. Other alternative forms of energy are also being explored, thus keeping with tradition, as this was the first city in Northern Europe to install streetlights, the alternative energy of the day in 1891.

Struve and his geodetic arc 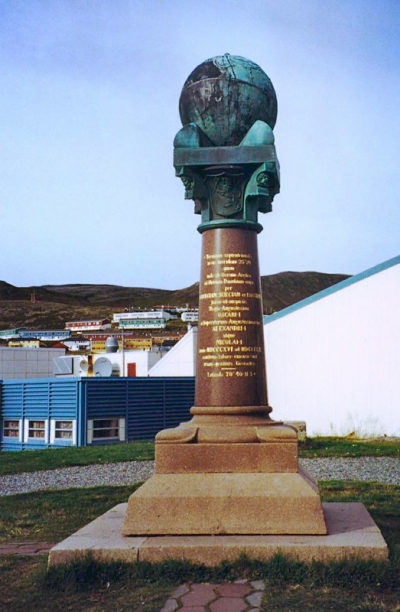 If you’re in Hammerfest, you’ve been further north in the world than most. And if you’ve stopped in front of this column, you’ve also seen the world’s second most northerly UNESCO World Heritage site (surpassed only by Russia’s Wrangel Island, which at 71°14’N is a mere 1° nearer the North Pole).

The column commemorates astronomer Friedrich Wilhelm Georg Struve’s project to measure the exact size and shape of the earth.

The Struve Geodetic Arc is a chain of 34 survey points reaching from Hammerfest to the Black Sea, passing through 10 countries along the way. The points are marked in various ways on its route southwards – it could be a hole drilled in a rock, an iron cross, a cairn, or an obelisk or column, as here in Hammerfest.

If you’re into world records, you might also like to have a look at St. Michael’s, the world’s northernmost Catholic church.

Wanting to continue to North Cape by boat instead of backtracking, I stop at a local transport company. Here’s my exchange with the woman at the information desk:

Me: ‘Is there a car ferry from Hammerfest to North Cape or Honningsvåg?’

Her: ‘What do you mean?’ Left eyebrow raised.

Me: ‘Can I take my car by boat from here to North Cape or Honningsvåg?’

Her: ‘No.’ Eyes back to her paperwork.

Me: ‘How about a passengers-only ferry then?’

Her, looking up, sighing: ‘The catamaran leaves in 10 minutes.’

Me:  ‘And does one return toight?’

Me: ‘Erm… perhaps a return ferry tomorrow then?’

Her: ‘Tomorrow is Saturday.’ She does not elaborate.

Her: ‘No boats on Saturdays.’

Me: ‘How about that boat that departs from Hammerfest every morning and every evening? You know, the old-fashioned way to approach North Cape, as it says on the poster right behind you there?’ (The poster is an ad for her company.)

As it turns out, Hurtigruten leaves at 07.45 every morning and does indeed take cars. But of course, it wasn’t her company.

I’m putting this conversation in as an example of something you may encounter. Most people here aren’t like that. Norwegians are pretty friendly folks, but not necessarily all that polite. It’s just not considered important. If you ask a lame question – like ‘where can I find the elevator up to that mountain top?’ (and yes, this has been asked, more than once), don’t be surprised if they laugh in your face. On the upside you get to do it back. So if you can handle that, and really exepnsive alcohol, you’ll have a blast.

Where to eat in Hammerfest – and a recipe you’ll like 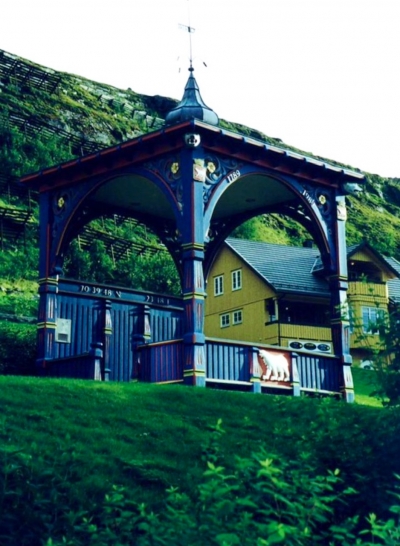 After my ordeal with can’t-be-bothered woman, I plonk down on the grass by the bright blue music pavilion and am soon joined by Gunnar, a scruffily dressed local of undeterminable age, apparently in search of company. We chat for a while and when I ask where to get a decent meal in town, he recommends Odd’s. He looks like he expects an invitation to join me, but I’m not about to extend one. He is harmless enough but a bit taxing, and I, like Greta Garbo, want to be alone.

Odd’s Mat og Vinhus, a gourmet restaurant here at the end of the world, specialises in local, traditional fare, like Arctic fish as well as reindeer, hare and seal (yeah, all cute and cuddly). Norwegians don’t have a long tradition of eating out, but Odd wants his place to be for locals, so he serves the same type of food they eat at home.

The décor is Arctic maritime – with sealskin cushions and placemats made of catfish skin. I have the daily special fish menu: delicious salmon and monkfish, and cloudberries for dessert. Odd’s coffee completes the meal – a major splurge.

As an added bonus for you, here’s the recipe for Odd’s Coffee:

Try this and I guarantee you’ll be the star of the show at the next company Christmas party.

Wanting to explore the area at twilight, I head for the intriguingly named Kirkegårdsbukt (Cemetery Bay), where archaeologists have uncovered traces of settlements dating back to the Stone Age, more than 5000 years ago.

While no doubt a beautiful beach in daylight, it is deliciously spooky in the swiftly approaching darkness. A gentle breeze wafts the tang of salt ocean air, tickling my nose as I stumble about in the ruins. I have the place entirely to myself. What an excellent setting for a bit of Nordic Noir. Perhaps featuring a naked body washed up on shore with ancient symbols carved on the left upper thigh…

I wonder what it must have been like 5000 years ago, living in a turf cabin by the sea, hunting, fishing, doing a spot of rock carving, occasionally warding off warrior tribes from Russia. Probably not all bad, I decide. No commuting to work, no rushing home to pick the kids up from pre-school, plenty of fish in the sea and reindeer skin to keep you warm.

On the way back to town, outside the cute little airport, another pair of reindeer – a teenager and her younger brother, I think – cross the street. They really are lovely animals; ethereal almost, with their extraordinary, long antlers. A Bombardier Dash 8 taking off, soon drowns out the distinctive clicking sound of their hooves as they fade into the night. 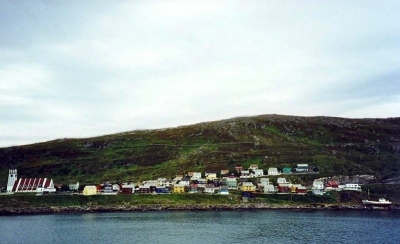 To the locals, reindeer are mostly annoying, since they eat shrubs and flowers. Anything willing to grow in this harsh climate is protected. Trees don’t grow naturally so they’re planted and treated with the utmost care, including a nice, snug winter wrapping.

Driving back into the northernmost city in the world, lights are on in every house, brightening up the dark sky. Every window is a warm pool of light and I feel very welcome.

Next morning, I’m up bright and early so as not to miss the northbound Hurtigruten. (Internationally, Hutigruten is mostly thought of as a cruise line; it’s also local transport.)

As I watch Hammerfest vanish in the distance, I feel somewhat melancholic. It is a lively and colourful place, this remote outpost close to the North Pole. I had expected it to be cold and bleak and grey. Instead, I found it warm and inviting.

When should you visit Hammerfest? If you want to experience the midnight sun, she (the sun is feminine in Norwegian) is up 24/7 between mid-May and early August. I’m more attracted to the enigmatic dark polar night period – no sun at all between mid-November and mid-January, and the chance of seeing the spectacular Northern Lights are greatest during this period. If you like festivals, Hammerfest will tempt you with a dance festival in spring, a beer festival in summer and a polar night festival in November. 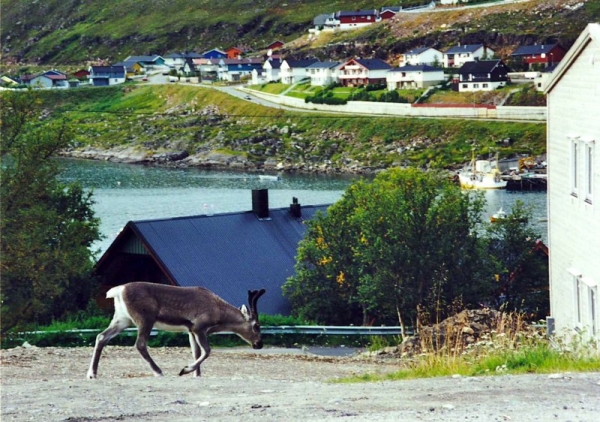 This article (now slightly reworked) was first published on Boots’n’All.