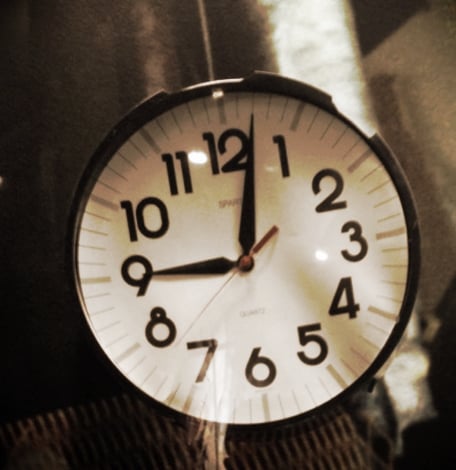 It’s a chilly winter day and I’m in the state where the wind comes sweeping down the plain. The Sooner state, the Boomer Paradise, the core of Tornado Alley, the only state with an active oil rig next to the state capitol building. Lately, also home of earthquakes, very possibly man-made. Among all the nicknames, my favourite is Land of the Red Man. Just over 100 years ago, this was Native American territory – until European settlers decided they needed even more space. This is Oklahoma, my home for nearly five years… a lifetime ago.

Even though the road system in Oklahoma City is planned, straight, I’ve always managed to get lost in this sprawling mid-western city. Today, luckily, my American brother is behind the wheel. We’re driving along Classen Boulevard, looking for chairs. 168 of them. 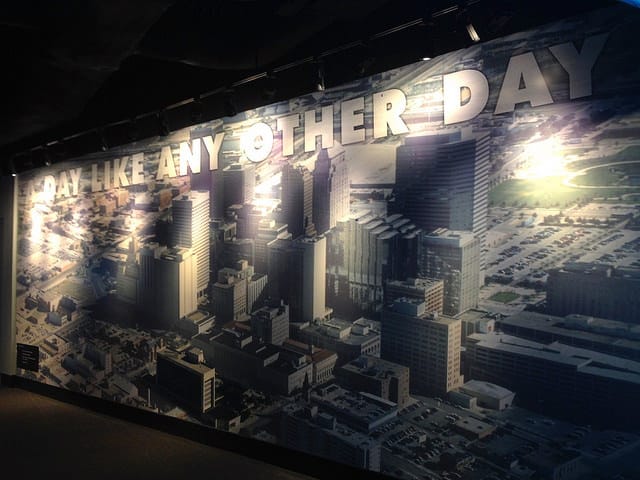 The Alfred P. Murrah Federal Building in downtown Oklahoma City housed the regional offices for a number of agencies: the Secret Service, the Social Security Administration, the Drug Enforcement Administration, military recruiting offices. But most of all, this was a place of work, for 550 people. Today, it’s but a memory.

It’s been years. 21 to be exact. 21 years since I’ve been here. But more significantly, 21 years since terrorism struck. I left town on 16 April 1995, flying out of Will Rogers airport on a TWA flight bound for St. Louis. Three days later, a 27-year-old man, disgruntled with the federal government, set off a car bomb in front of the Murrah Building. 168 were killed, including 19 children. 15 of them had just settled in for the morning, at the in-house daycare centre.

The murderer was Timothy McVeigh. Not a foreigner, but a homegrown terrorist. A white, Christian terrorist. As was the Norwegian terrorist who set off a car bomb in Oslo’s government quarter, killing eight; then went on a rampage killing 69 kids at a summer camp. He was also disgruntled, particularly with cultural diversity and feminism – what most of us would consider beacons of a progressive society. 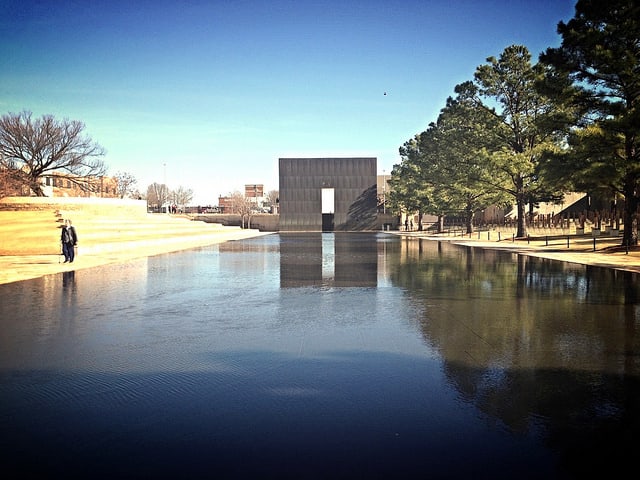 Through the trees, we spot them. Rows of chairs, one after another. This is it, then.

We park along the street, then walk up the few steps and enter the site. Ahead is a shallow pool, reflecting the afternoon sun, bright even in winter here in Oklahoma. We’ve entered through a gate marked 9:03. A massive bronze gate. At the other end of the glimmering fluid mirror is its twin, marked 9:01. The Gates of Time.

At 9:01 on 19 April 1995, this was a day like any other days for most Oklahomans. A Wednesday like any old Wednesday. Two minutes later, their world had changed completely. 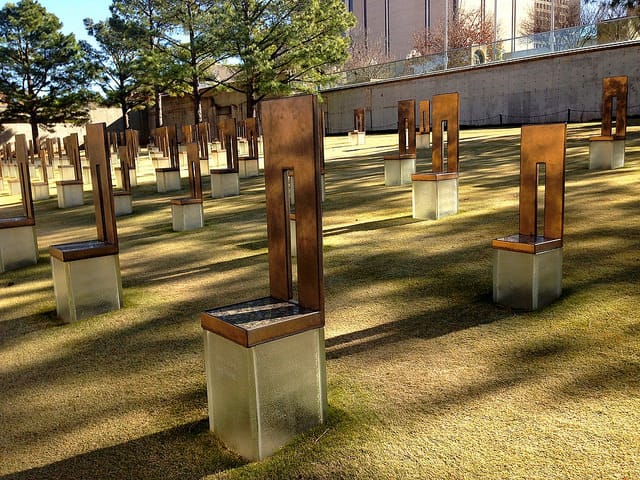 Each chair has a name engraved into its base. Three of the chairs represent two lives – a mum and her baby, still in the womb. 19 chairs are child-size, heart-breakingly small. The one closest to me reads Dominique Ravae (Johnson)-London.

Of the 168 dead, not all were employees. Pamela Argo had a 9 o’clock appointment at the Social Security office. That’s where Teresa Alexander was as well; she had just popped in to get a social security card for her baby son.

On the other side of the pool is the Rescuers’ Orchard. There are maple trees, well suited to the erratic Oklahoma weather. And Redbuds, the state tree.

One tree is markedly different. This is the Survivor Tree, a large elm which has been here since Oklahoma was Native American territory. Before statehood, 109 years ago. The tree was badly damaged in the explosion. Branches were torn off, glass driven into its body, darkened by fire. It was very nearly chopped down during the recovery effort. Against the odds, the tree bloomed a year later and is now protected by mandate. 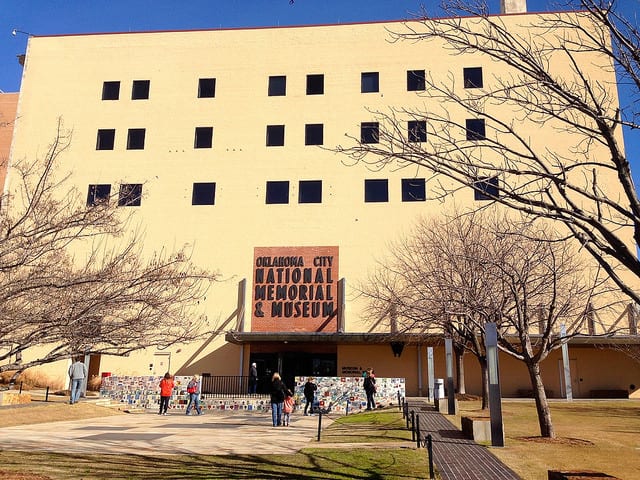 The museum is housed in the former Journal Record Building. Inside, we walk through the day that began like any other days. Artefacts are displayed: glasses, shoes, broken telephones, a clock stopped at 9:02.

We wait to be let in to the room where, in the early hours of 19 April 1995, a meeting of the Oklahoma Water Resources Board was getting on. We sit down on benches along the wall, facing a table on the opposite side of the room. Voices come from a sound system, the official recording of that morning’s meeting. Mind-numbingly tedious. Then boom! Chairs fall, people yell. ‘Everybody get out. Out the back door.’ As we leave the room, a collage of black and white photos of the victims appear on the wall. 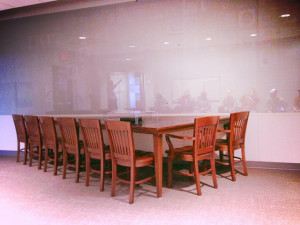 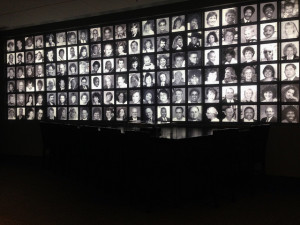 Some exhibits are controversial: a red neon star is the entrance sign from the Dreamland Motel in Junction City, Kansas, where McVeigh stayed while plotting his heinous deed. A yellow 1977 Mercury Grand Marquis is the getaway car that caused his arrest just an hour and a half after the explosion, because the car lacked a valid licence tag. It’s the little things. Or perhaps karma. 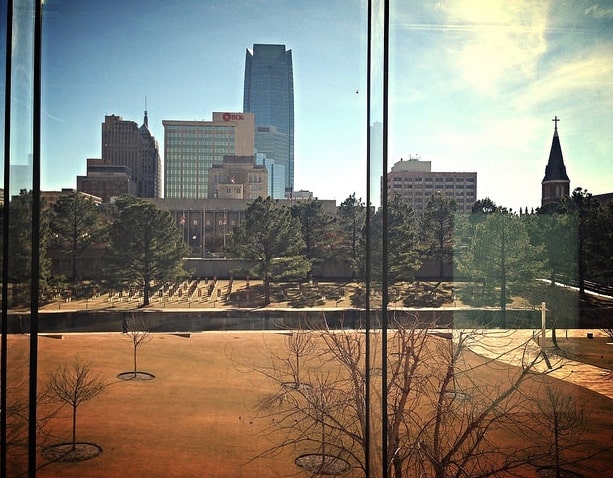 Most haunting is the Gallery of Honor. Family photos of the victims are displayed here, along with personal items: drawings, toys, jewellery. Computers tell the story of each one. I search for Dominique London. He was two years old.