Olomouc and the Obelisk

Is Olomouc one of Europe’s secret little pearls? An informal survey amongst friends revealed just 2 out of 11 had even heard of it. REM knows about it, though – or sings about it, at least. And Tolstoy, too. In War and Peace, Czar Alexander I and Emperor Franz II meet (pre-Battle of Austerlitz) at the Archbishop’s Palace here to discuss war strategy.

Whilst Olomouc might not be the most famous city in Czechia, it is pretty. Even on a bleak November day. In fact, it might very well be the prettiest new town I’ve seen this year. But then I’ve said that before, haven’t I? One after the other: this is the prettiest town… no, this is… no, this…

But so be it. Salzburg, Hallstatt, Milan, Lugano, Turin, Aosta Valley, Sarajevo, the canyons of Montenegro, even unassuming Podgorica, then Tirana, Ohrid, Prizren, Kaunas, Wroclaw, Trier, Nancy, Metz, pretty much all the new places (new to me, that is) have had elements of the fantabulous. Fortunately, it doesn’t have to be a competition. 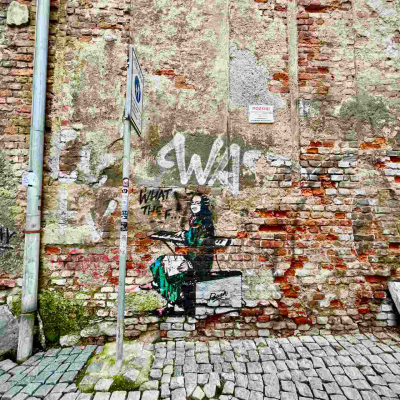 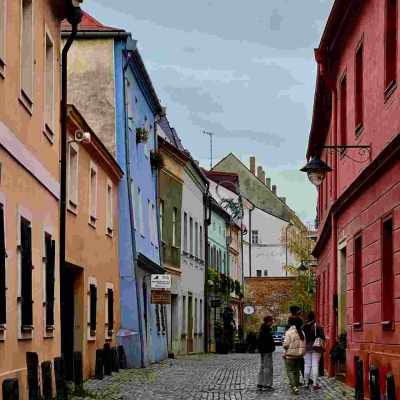 I’ve popped over from Krakow for the weekend, where I’m in the middle of a workation, i.e. doing a bit of volunteer field work. With Saturday and Sunday off, a little workation from the workation is in order. And Olomouc has been on my list for a while, partly because those that have been, have been delighted. And partly to see the biggest plague column anywhere.

The Catholic world is full of symbolism, and Olomouc is no exception. The biggest symbol of the Catholic faith here in Olomouc is the 35-metre high, 17-metre diameter, 18th century Holy Trinity Column. This Baroque hexagonal column is strewn with sculptures of Biblical scenes and personas, 21 of them. Phew, that’s a lot of numbers. Here are a few more:

There are three levels, with a 10-metre high pillar on top. The first level has seven steps, 18 guarding saints and a chapel. A bit further up are Jesus’ grans, Anne and Joachim, as well as his stepfather Joseph. Still further up a ways, is mum Mary and her entourage of angels lifting her up into the hereafter. At the very top is a gilded ensemble of father, son and star, the latter representing the holy ghost.

I walk around it a few times, and notice more details each turn. 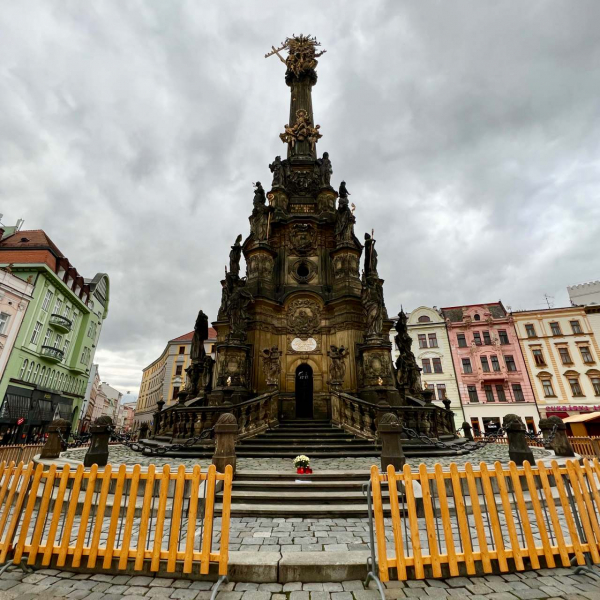 I’m reminded of the tall golden column that greets me whenever I step out the door of Pension Nossek in Vienna, one of my fave sleeps anywhere. Never given much thought to it having any particular meaning, but checking it out now, I see it is called Die Wiener Pestsäule, the Viennese Plague Column.

The column here in Olomouc is rather different. Not only is it much larger, it is also much darker and more enigmatic. However, the truth is less about enigmas and more about pollution. Whereas Vienna’s elegant Graben is pedestrian only, this square is not. Why it isn’t, now that really is enigmatic.

Maybe I wouldn’t think that on a warm summer day. The Holy Trinity Column is particularly gorgeous in summer, the tourist office rep assures me, surrounded by flowers as it is. Not much in the way of floral deco today. Still, it is an imposing sight, enough to put the fear of God (and everyone else on it) into our forbears, I’m sure. 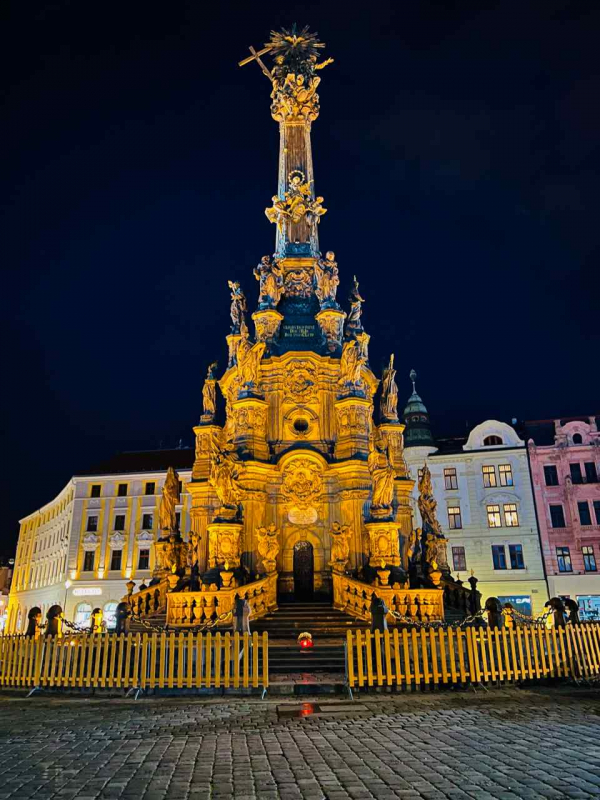 Even more striking at night

I mentioned plague columns. Central Europe is chock-a-block with them. It seems in every city, town, and village in Czechia, you’ll find columns dedicated to the Holy Trinity or to the Virgin Mother. Same with many other countries in the neighbourhood. These sculptures are about demonstrating faith, specifically faith to overcome flare-ups of the plagues that, well, plagued Europe in centuries past. The Holy Trinity Column here in Olomouc was erected as a thank you for ending the plague in 1716.

Columns commemorating plague – and war
In the Thirty-Year War, the Swedish Army was in attack mode. During the Battle of Prague (1648), the city helped beat those awful (Protestant) Swedes. To commemorate this, a column was mounted on the city’s old town square, Staroměstské náměstí, two years later.

After World War I, when Austria-Hungary fell apart, the column was destroyed. The country was now Czechoslovakia and memories of the former rulers, the Catholic Habsburgs, was neither needed nor wanted. Hundred years later, in the more pragmatic present, Prague’s Marian Column has been reconstructed, and has stood proudly at Staroměstské náměstí since 2020.

Why wasn’t the column here in Olomouc torn down after World War I, you ask? Well, Olomouc was, and still is, a bishopric, and as such, a Catholic stronghold in the country. The Holy Trinity column symbolised the Habsburgs, and Olomouc was pro-Austrian. People simply wanted the column to stay – and so it did.

Horni náměsti and the Communist Clock

Horni náměsti (Upper Square), the cobbled square surrounding the Holy Trinity Column, has several lovely Art Nouveau facades, but none as tall as the column. Only the church spire rises above it. 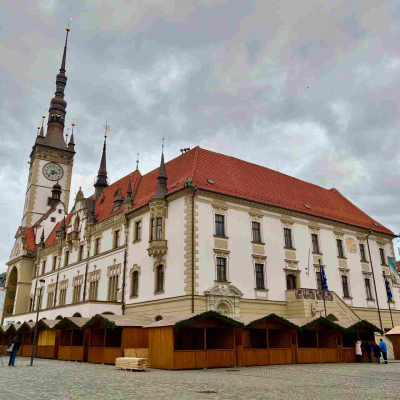 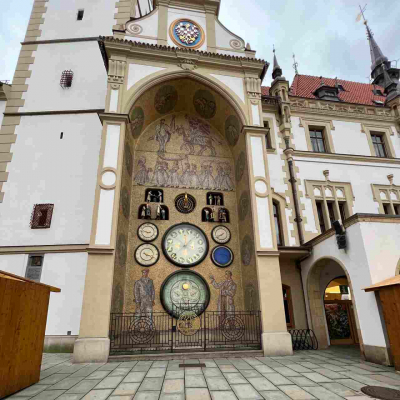 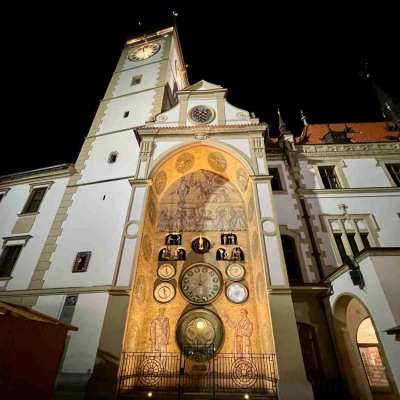 The square is normally rather lively, I hear. Olomouc is home to Univerzita Palackého, the second-oldest uni in Czechia. But this is neither the weather nor the high season for being out and about, for students or others. A few stalls selling several varieties of Glühwein are doing a relatively brisk business. Stands are being assembled for the coming Christmas Market. Temporary fencing is set up around the column and the other monuments, presumably to protect them from over-eager revellers to come. 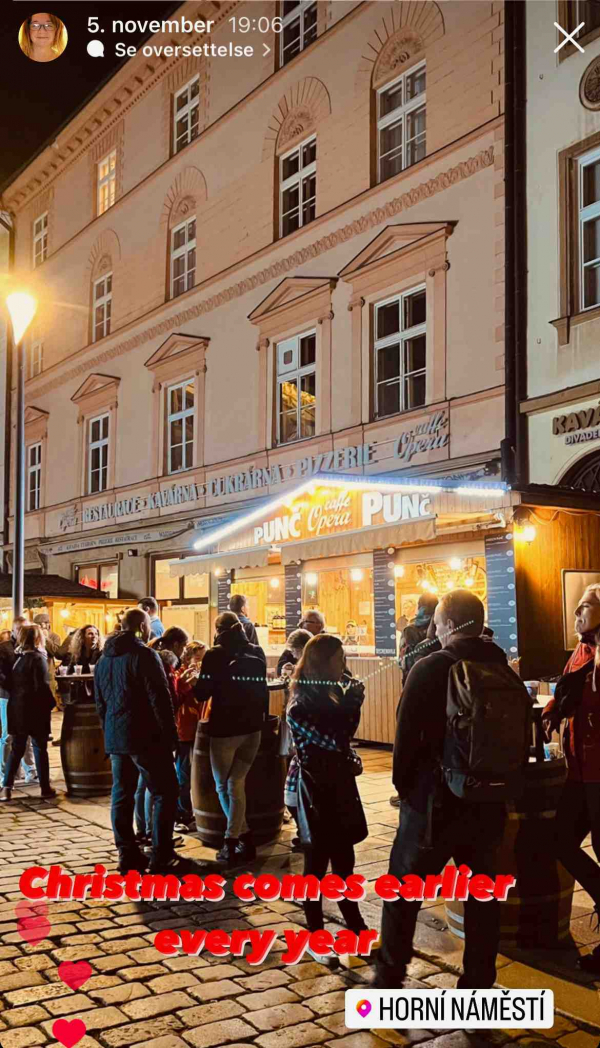 There are six fountains here, complete with sculptures – as well as another plague column, all in the same Baroque design. I spot some of them on the way to Dolní náměstí, Lower Square, just behind the town hall. One fountain is named after Julius Caesar; the other five after creatures from Roman mythology: Hercules, Jupiter, Mercury, Neptune and Triton.

Here is Neptune with his four seahorse waterspouts. 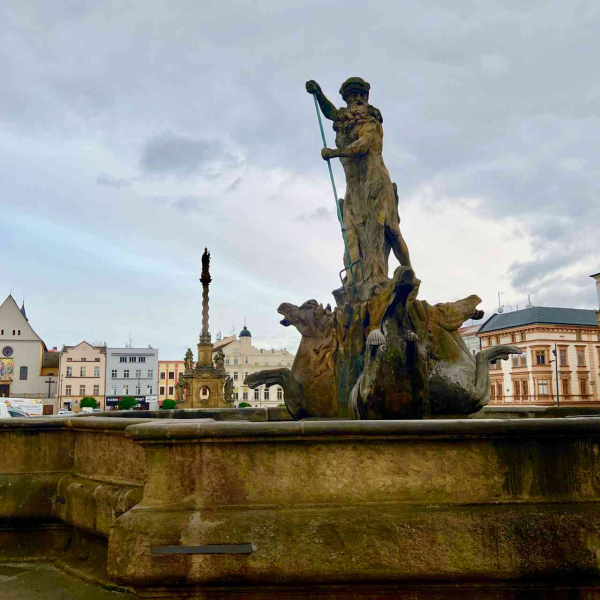 Pride of place at Lower Square belongs to Mary. 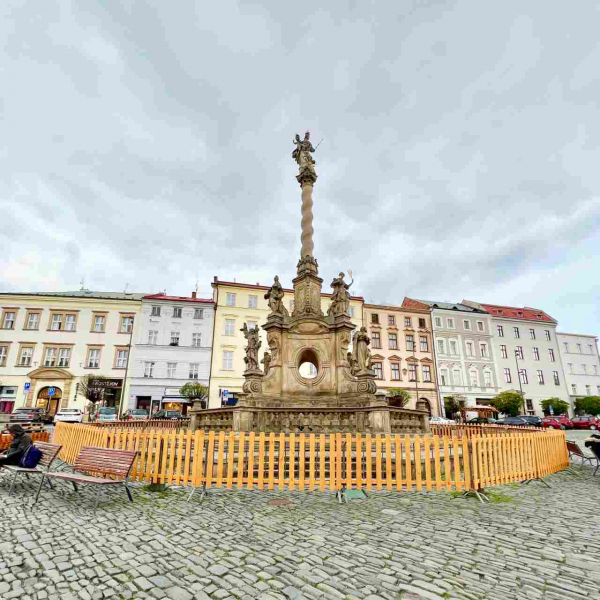 Olomouc’s Marian column is smaller and less ostentatious. The calm lightness and simplicity is more my style. 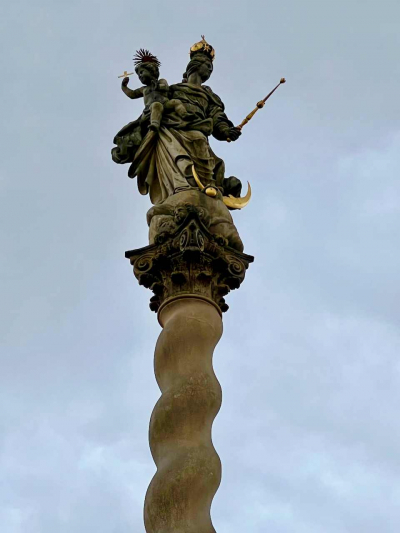 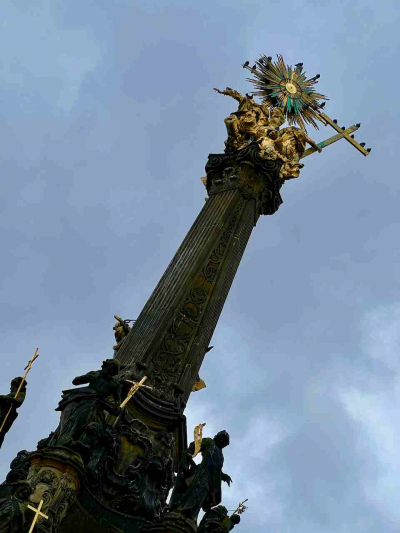 Mary vs Trinity. What do you think?