On the road in Egypt

Thursday 3 January 2008: Getting up at 0345 is not particularly child-friendly. Luckily, my daughters are easygoing. They look forward to sailing the Nile and seeing Egypt. A six-hour flight later, we land in Hurghada. Now, I won’t knock Hurghada, because I didn’t see all of it, but apart from beautiful beaches, grand resorts along the Red Sea coast and probably fab snorkelling and diving, is there much to it? Is there a city? A centre? A lively, bustling market? Perhaps. I didn’t see one.

Now, about Egyptian traffic. Where do I begin?

Most long-distance transport in Egypt seems to be in convoy, often with more than 100 busses, one after the other. So is our journey from Hurghada to Luxor. We break twice during the four hours.

At a convoy stop

As we drive through the Red Sea Mountains, darkness descends. The driver doesn’t switch the headlamps on – except every once in a while, to check the road and oncoming traffic, presumably. Afterwards, he switches the lights off again. An effort to save energy, perhaps?

Road safety isn’t high on the priorities list, it appears. We’re told traffic lights have been installed in Luxor, but no one really cares. So the authorities optimistically put up countdown clocks, politely saying Could you kindly wait just 16 more seconds until the light turns green? 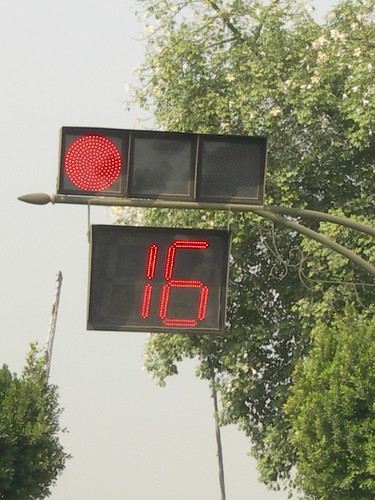 Egyptian traffic is a story all on its own.

Pedestrians, cars, busses, lorries, donkeys and caleches (horse-drawn carriages) just keep on, disregarding the lights. The largest vehicles seem to have the right-of-way – and it’s every man, woman, child, donkey and stray for himself. It’s a tough world – and totally opposite of how things work home in Scandinavia, where pedestrians always come first – even when jaywalking. 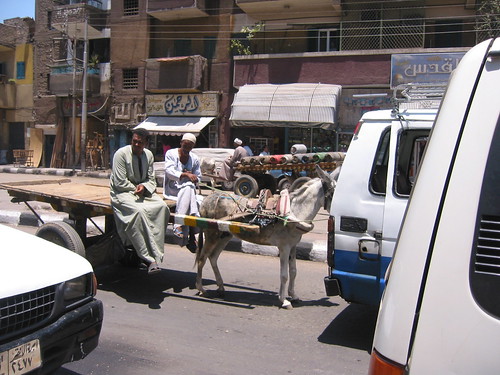 Caroline, a Swedish expat, tells us a driving licence is relatively easy to obtain in Egypt. You make an appointment to take a driving test. When there, you’re asked to drive slalom between a row of cones; then do the same in reverse. That’s mostly it! If you manage without hitting too many cones, the licence is yours. Of course, if you’re a man (or, I suppose, a woman) of means, you don’t have to go through the cone test. You simply buy a licence – or often four – to have a little something to go on, in case some are revoked.

It’s a bit of an eerie feeling, travelling in complete darkness along the edge of the desert. But we get to Luxor in one piece, so the driver probably knows what he’s doing.

How’s traffic in your part of the world?