Ostalgie: What is freedom, anyway?

This Sunday marks the 25th anniversary of the fall of the Berlin Wall. I’m brought back to my first visit to Berlin, a divided city then.

Crossing from West to East Berlin, we had to exchange 25 Mark (about 20 USD) into 25 Ostmark (East Mark). We could not bring East German currency out of the country – at least not legally. When leaving, any remaining Ostmark had to be handed over at the East German border post. You could not exchange it back, but you could ask for a receipt and collect the money if you returned within a year. Of course, you would then have to exchange another 25 Mark to enter anew.

Trouble was, it was difficult to spend 25 Mark in East Berlin. After a solid meal and several beers, you’d still have plenty left. The shops we saw were mostly filled with basic food stuffs – milk, flour, pickles and the like – and not exactly fashionable clothes, seen through the eyes of spoilt 1980s kids (this was, after all, the golden age of consumerism in the west.) 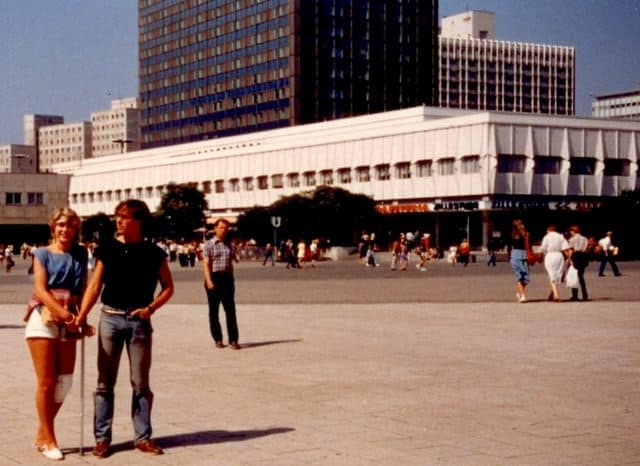 Ambling about Alexanderplatz that August day more than 25 years ago, we are approached by a middle-aged couple, eager to chat to us foreigners. As they wander on, the woman turns to us and says: Es ist besser im Westen – it’s better in the west. A few years later, in the early days of November 1989, almost one million people gathered on Alexanderplatz, demanding democratic reform.

These were just a few of the slogans from those November days 25 years ago. You can see many of the banners at The German Historical Museum in Berlin.

Sometimes, I think about this woman. I wonder if she still thinks the west is better. All over the former eastern bloc, I’ve met people who long for old times. In Germany, it’s called Ostalgie: nostalgia for the east, for everyday life in East Germany. In the Balkans, they call it Jugonostalgija. Somewhat ironically, businesses have latched on to this phenomenon: old state-run TV-programmes are issued on DVD, Trabant cars take visitors around the city, and some of the old brands of food that had to yield to western brands are again available.

But it seems to go deeper than just a longing for the daily life of old. In the republics of the former Yugoslavia, I’ve heard numerous people express admiration for Tito. A few years ago, I talked with a young Macedonian, worried about his future, and that of his baby son. ‘I was born in 1977,’ he said. ‘My childhood was good. Now life is hard and the future… I don’t know. We are many who want a Tito.’

Others are tired of their past being marginalised.

Freedom of speech is good. But you can’t eat it.

When arguing freedom of speech, I’m often met with weary looks, sighs. It can be a question of survival. ‘Freedom of speech is good,’ a Russian mother said to me. ‘But you can’t eat it, can’t clothe your children in it during harsh Siberian winters. Before, everyone had jobs, a place to live and food on the table, education for our children, all our basic needs covered. Not anymore.’

In some western countries, freedom is often associated with a low degree of government interference in their lives. For others, freedom means not having to struggle to stay alive, not having to worry about the future.

For the 20th anniversary of the fall of the Berlin Wall, Der Spiegel – Germany’s largest news magazine – published an article with the headline Majority of Eastern Germans Feel Life Better under Communism (in English here).

‘What about the freedom of being able to walk the streets without being mugged,’ another Russian asked me. During the communist regime, Moscow was one of the safest cities on earth. Not anymore.

We wanted democracy, not capitalism

When I ask people what they miss the most, many fondly reminisce about a simple stress-free life and a sense of community, of real friendships and solidarity, of having time for each other. Others talk about fairness and equality, incompatible with a brutal competitive economy, in their view. Most often, I’ve heard this sentiment: We wanted democracy, not capitalism.

What does freedom mean to you?