The Palmyra Hotel in Baalbek: Wacky, Weird and Wonderful

We don’t write heaps of accommodation reviews here on Sophie’s World. Can’t be just any boring old accoms, you see. It has to be unique, like a lighthouse, say. Or a shipping container. Or an exceptionally beautiful hotel. Or a combination hotel/refuge for asylum seekers/artists’ workshops. Or haunted.

Every once in a while, something special pops up. Palmyra Hotel in Baalbek in Lebanon’s Beqaa Valley is one. There’s so much deliciously quirky with this place, I couldn’t not share it. 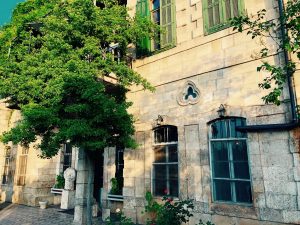 Palmyra Hotel opened in 1874. During those 144 years, Lebanon has been through a couple of world wars and a devastating 15-year-long civil war. Furthermore, we’re just kilometres from the Syrian border, where war has been raging since the Arab Spring in 2011, and sadly doesn’t show any signs of dissipating any time soon. Four years ago, IS tried to get a foothold here in the Beqaa Valley, but their efforts were for the most part thwarted by the Lebanese army.

Impressively, through thick and thin, Palmyra Hotel has remained open. Even when, at times, the guest rooms have been completely empty, leaving the staff of seven with nothing to do.

Our little group of nine is welcomed with open arms into the spacious foyer, then brought upstairs where our rooms encircle a common sitting area. Here, Ahmed Kassab serves us glasses of local arak. He is happy to chat, and after working here since 1954, this man has stories aplenty. 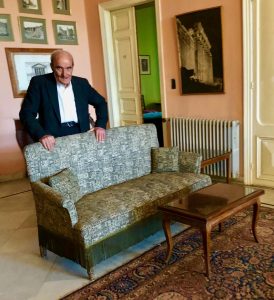 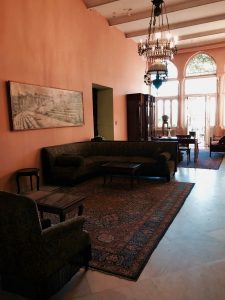 Just off this common area is a lovely old balcony where you can have tea (or more Arak) and look out over the UNESCO-listed Roman temples at Heliopolis, just across the street. 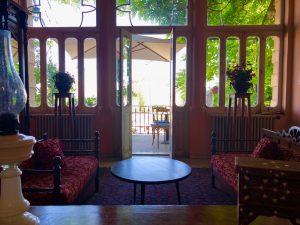 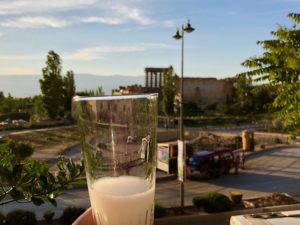 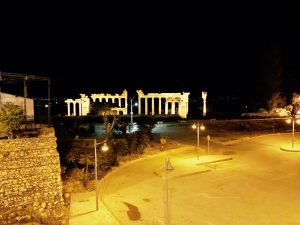 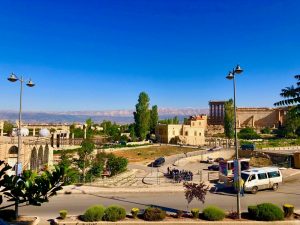 The Jupiter Temple seen from the balcony. Views inspiring artists through the decades.

The reception is plain in a quirkylicious French-police-office-from-the-1950s kind of way, and the long halls are decorated with photos, letters and artwork of many of the prominent guests.

Here’s King Leopold of Belgium and his Swedish wife, Queen Astrid, the beloved fairy-tale princess (and queen for just over a year) who died much too young in a car accident on 29 August 1935. Sounds familiar? 62 years and 2 days later, another fairy-tale princess suffered the same sad fate, curiously just metres from Place Reine Astrid in Paris, named after the Belgian queen. But I digress. 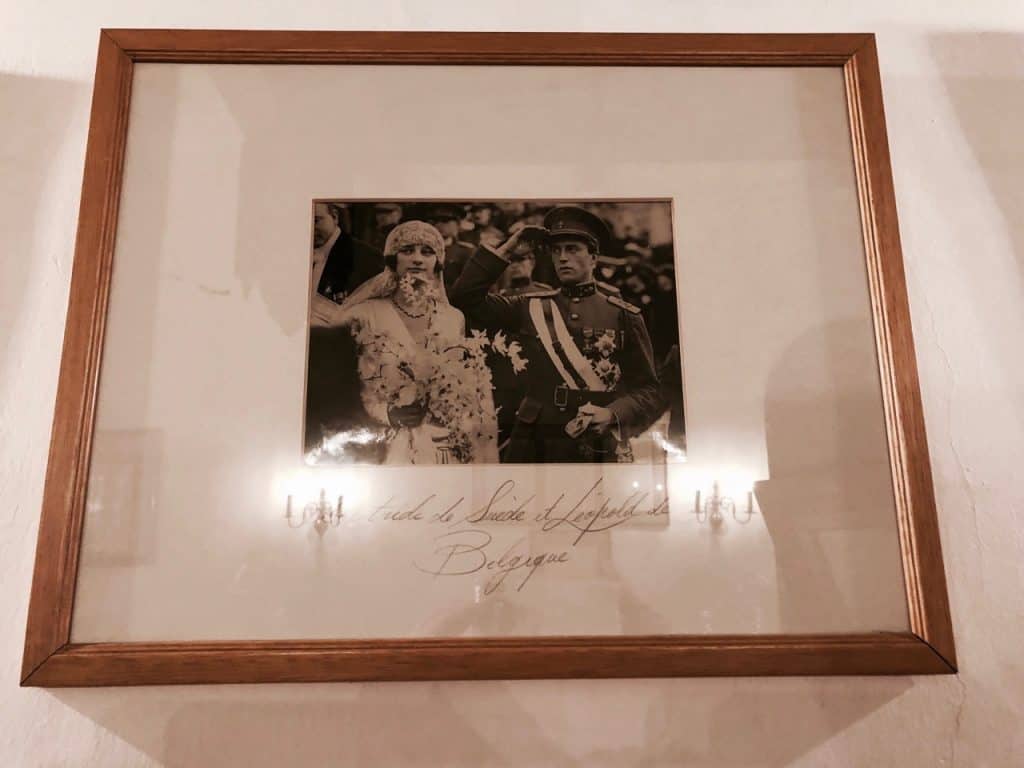 A letter and drawings by famous French artist Jean Cocteau… 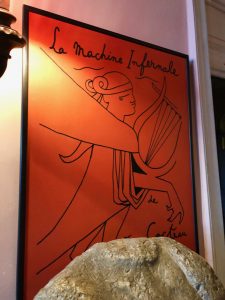 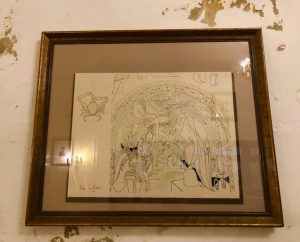 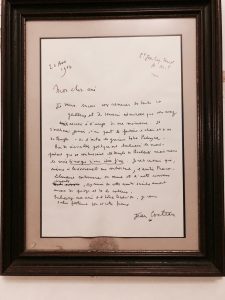 Germany’s last emperor, Kaiser Wilhelm II, was a guest at Palmyra Hotel in 1898… 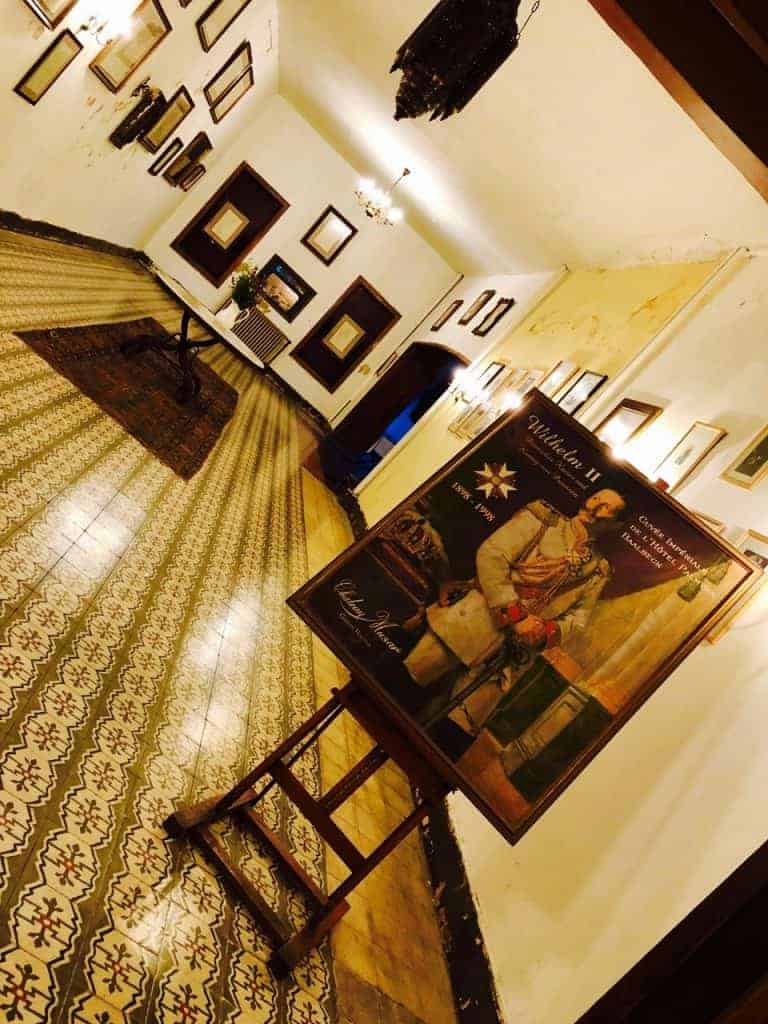 The restaurant is simple, as is the breakfast – but in a most enjoyable way. Arabic food and eating habits have always been among my faves. Delicious food, and it seems to agree with me. I think the Middle East is the only place where I can eat seemingly anything that I like, and still manage to lose weight.

For breakfast, Lebanese flat bread is being baked the traditional way, on the spot, hot and fresh. 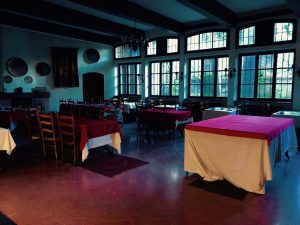 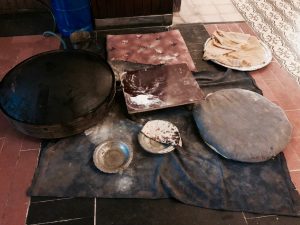 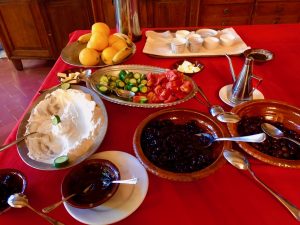 The tall doors to my room open with a large metal key (slightly corroded), attached to a heavy keyring. No impersonal plastic keycard here. Ceilings are beautifully high in the rooms as well as in the common area outside; it’s about 4 metres up! Love that; it’s easy to breathe. 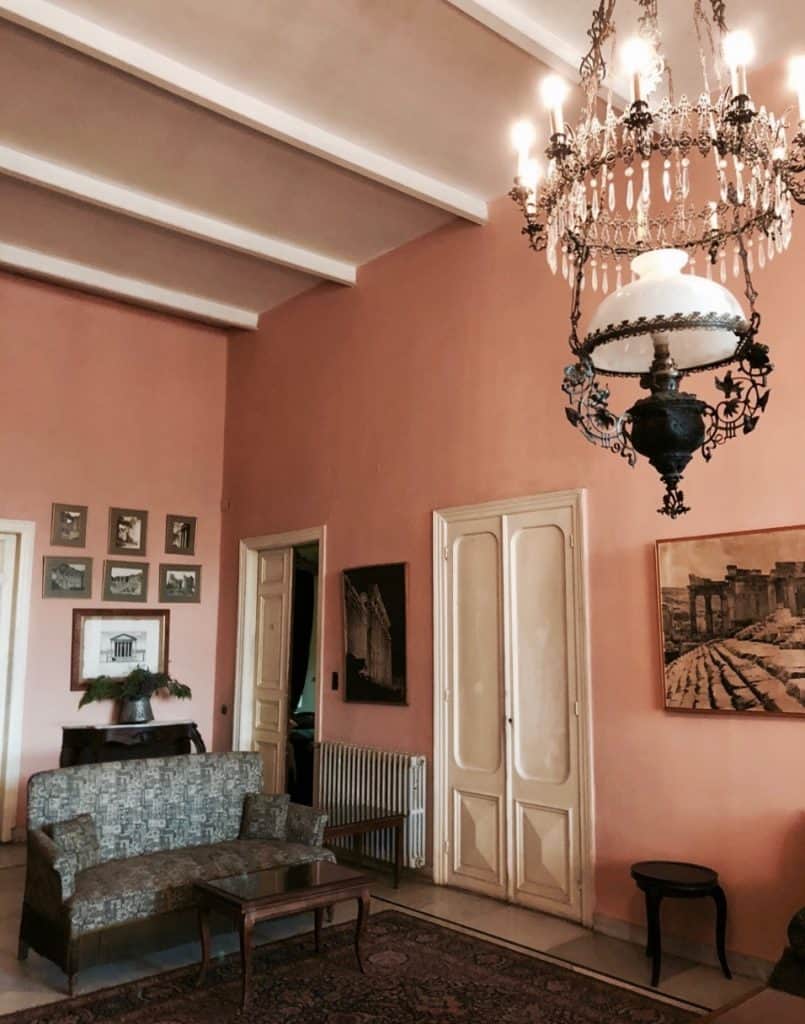 I’m in room 19, a corner room, with windows on two of the walls; the heavy velvet drapes in the deep, rich colour of emeralds. 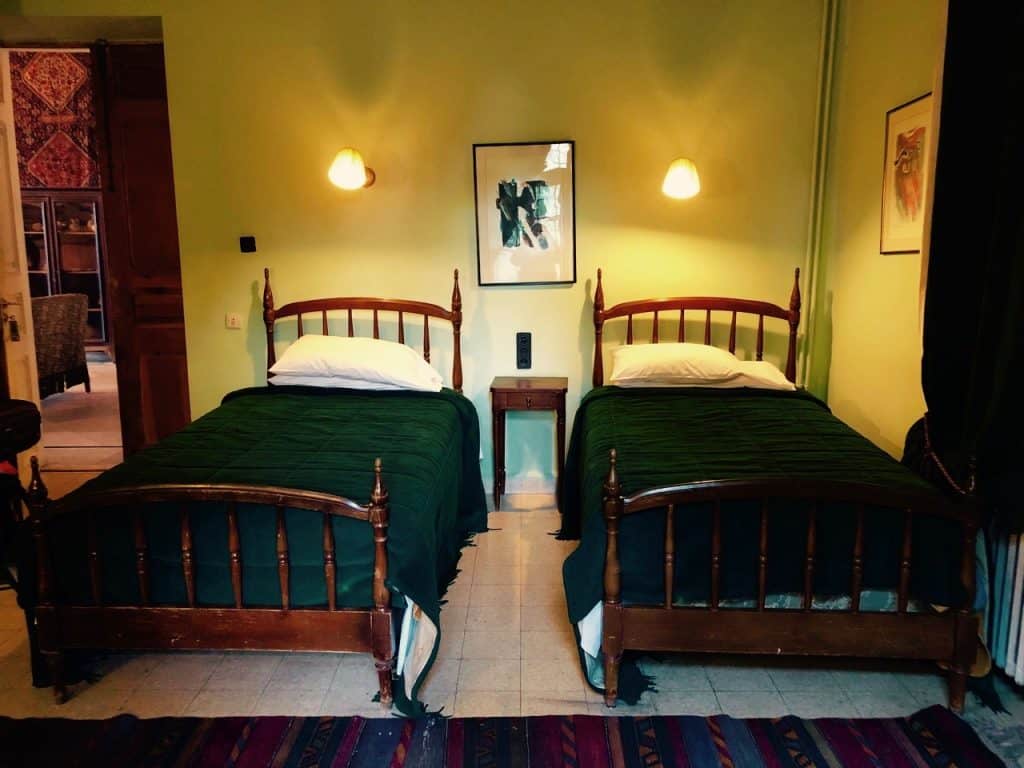 As for those mod cons, there’s no minibar or TV. Which feels oddly appropriate. But there is wifi (if sketchy), and comfortable beds (if squeaky).

The bathroom is spacious and simple, not very different from 50 years ago, I imagine. What you need, but nothing unnecessary. There’s a proper, normal bar of soap, not a miniature one or a small plastic bottle. Faucets are a bit rusty and hinges crooked.

And here’s something which I might be rather alone in appreciating: towels that have not been dried in a tumble dryer, but out in the sunshine – you can smell the fresh air, and it has that delicious, slightly rough touch-of-hammam feel. 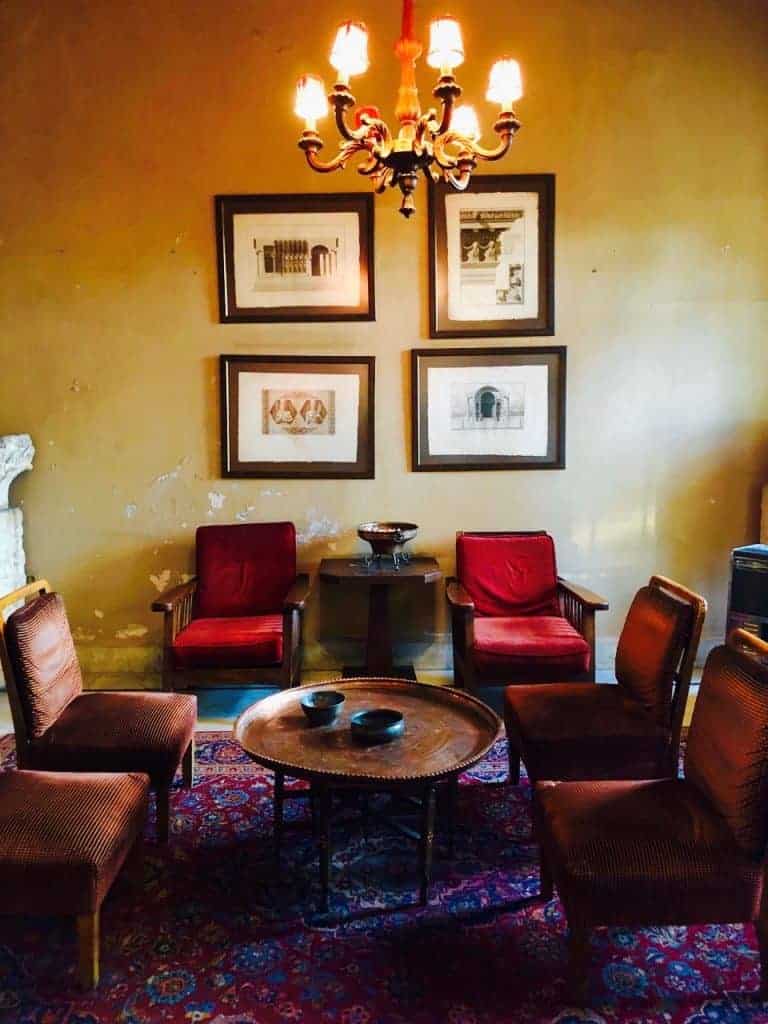 This hotel must surely be the very definition of faded grandeur. In the most appealing way.

Once, Palmyra Hotel had 40 rooms on offer. Today, only half remain open. And on this day, in May 2018, the nine of us are the only ones staying here.

The history and the events these walls must have witnessed through the last 144 years holds endless fascination for me during my much too brief one-night stay. 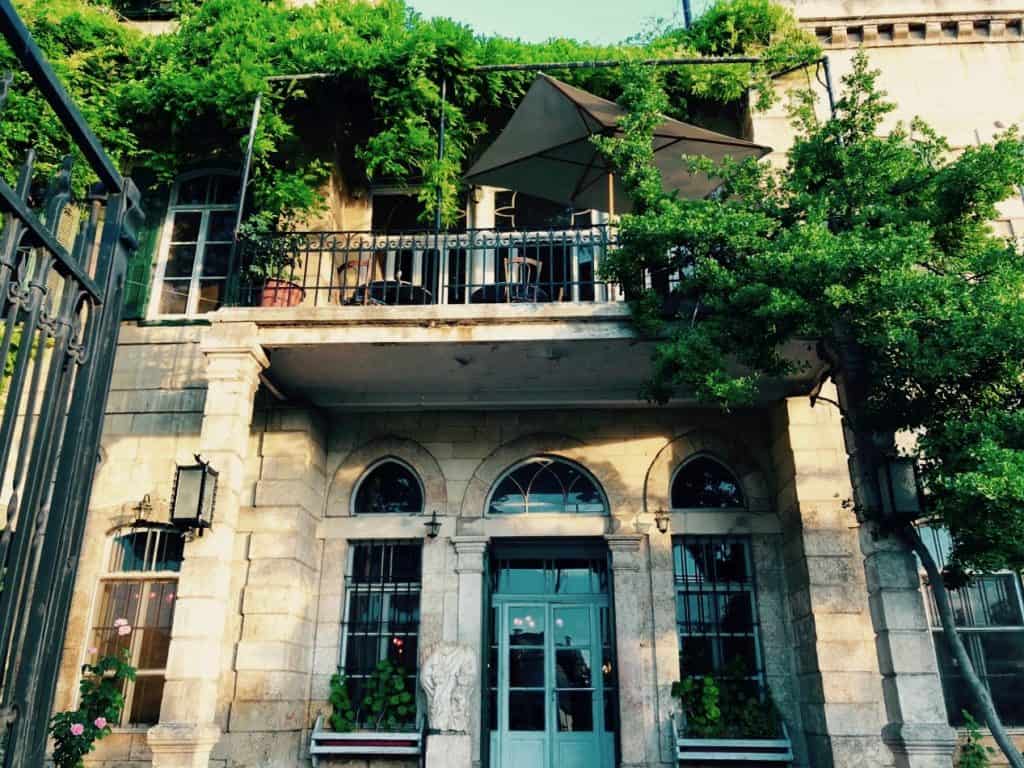 What I especially liked about Palmyra Hotel in Baalbek 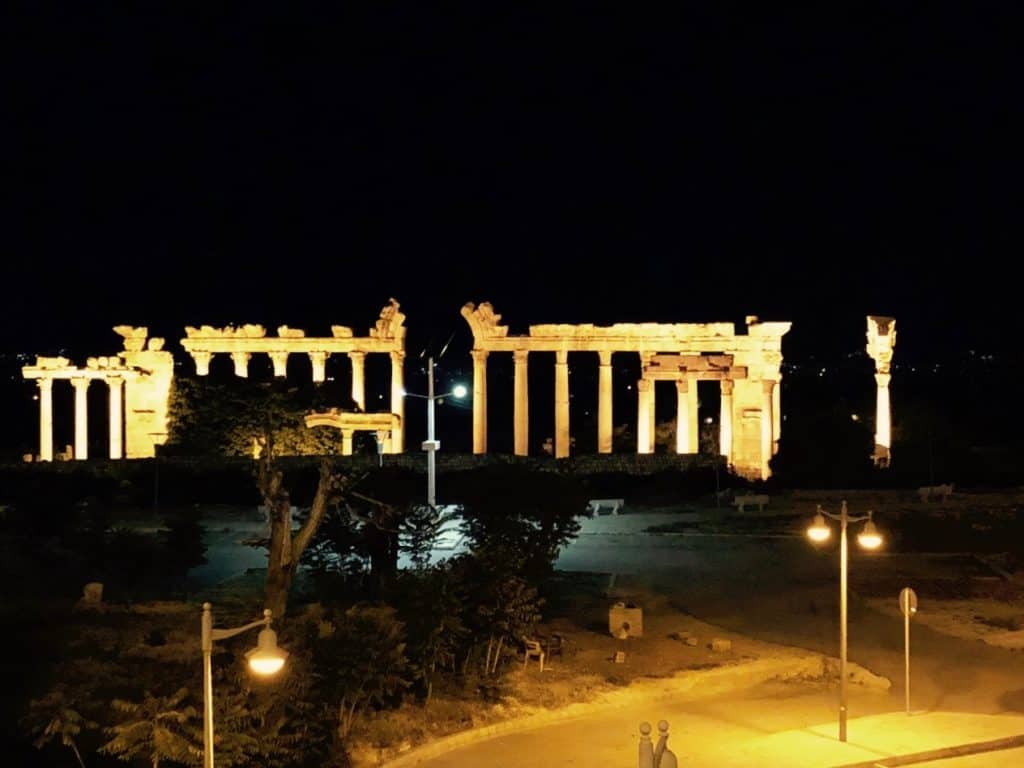