Dear reader! I’m going to begin this post by warning you that a serious rant is forthcoming.

However delightful this pastoral scene, I find the par force landscape in Denmark a difficult world heritage site to appreciate.

When UNESCO in 2020 rejected an application to classify bullfighting as cultural heritage in need of protection, I felt relieved, thinking that the world is improving. That the human species is improving. And if there has ever been a petition to include fox hunting (torture and brutal murder of foxes) or grindadrap (torture and brutal murder of whales), I expect it will also have been rejected.

On the other hand, the par force hunting landscape in Northern Zealand is. Included, that is. As late as 2015.

Let’s take a look at par force hunting: what it means, and how it was practiced in aristocratic circles – in Denmark and elsewhere – a few centuries ago.

But first, a look at this lovely tree and the curious light phenomenon. So I (and maybe you, too) won’t forget to breathe. 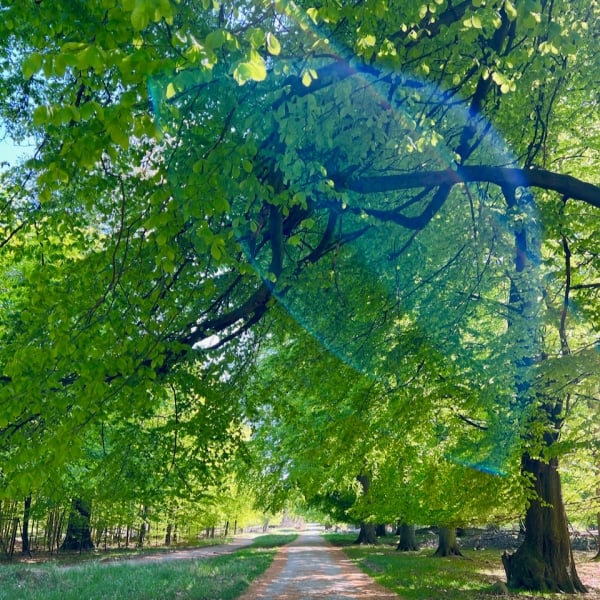 Par force, you won’t be surprised to hear, is French for ‘by force’.

The hunters would choose a quarry, preferably a large stag, and chase the animal on horseback, accompanied by a pack of dogs. The pursuit could last for hours, until the deer was cornered, exhausted. The most important person in the hunting party (usually the king), then moved in for the fatal strike, normally with a sword.

I’ve pinched the following quote from the par force site’s website about the hunt:

The thunderous sound of pounding hooves and the baying of excited hounds fills the forest. Around a majestic stag, now brought to bay, stand 20-30 mounted hunters and a larger number of hounds, waiting for the coup de grace. The king enters the clearing where the exhausted stag is pinned down by the hounds. He dismounts, draws his short hunting sword, his hirschfænger, and plunges it into the heart of the stag. The hunt is over.

And with that ‘coup de grace’, the king demonstrated his superior bravery.

Or so they say. A group of men and their dogs, chasing an animal until it collapses. The many against the one. I don’t see how that can be anything but the complete opposite of bravery.

The website mentions nothing about the cruelty of this practice. They call it ‘the most magnificent form of hunting’. I call it depravity.

One could argue the hunt was for food. A particularly callous way of securing food, but… – and every bit of good will towards my fellow man is stretched to the very limit here – … but not even that can serve as an excuse. When you flee for your life – whether you are human or another form of animal – you feel fear, and exhaustion. This releases adrenaline which in turn affects the taste and quality of the meat, often rendering it inedible for humans, as was the case in the par force hunt. The meat was given to the dogs. The tracking dog got the best bit, the head. The killer received the front leg as a trophy.

There was no element of procuring food in par force hunting. Just entertainment. Torture and murder purely for fun. There is a name for people who enjoy that. It’s not a name you want to be called. 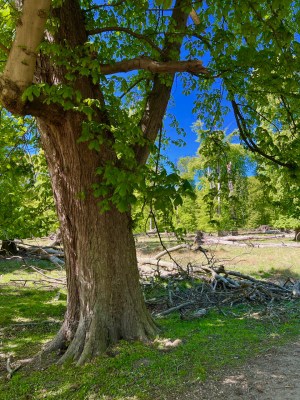 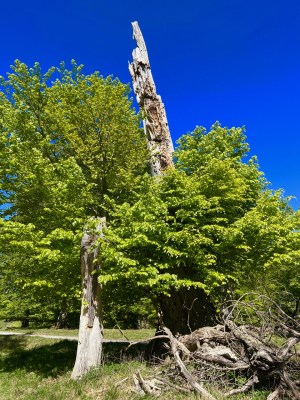 But maybe I have a teeny bit of it in me. You see, when I hear the story of the King’s Oak, I can’t help but feel a bit of schadenfreude. The king in question was Christian V. One day in 1698, Chris and his buddies are out hunting, and come upon a large stag. After the usual tortuous chase, the king, important and ‘brave’ as he is, slays the deer near an old oak tree. Now, this deer doesn’t give in so easily. I like to think the stag must have thought something along the lines of ‘you hurt me, I hurt you’, before giving the king a good, hard kick. King Christian V sustains such serious injuries from the kick, he dies within a year. How’s that for karma biting your ass! 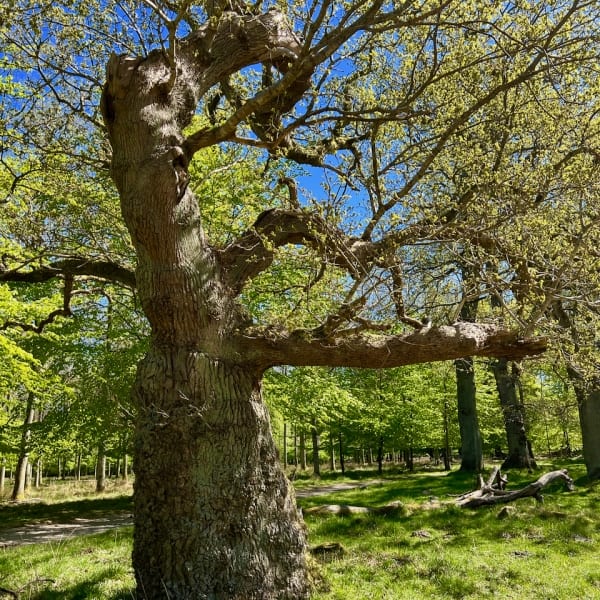 One of the many ancient oak trees in Jægersborg Deer Park; the oldest one is more than 800 years old.

A landscape of power

So why is the memory of such a barbaric practice considered worthy of special protection for future generations to enjoy?

The only redeeming factor I can see is that it stopped a long time ago. The final par force hunt in Denmark took place in 1777.

According to the world heritage inscription the par force landscape is:

…a designed landscape where Danish kings and their court practiced par force hunting, or hunting with hounds, which reached its peak between the 17th and the late 18th centuries, when the absolute monarchs transformed it into a landscape of power. With hunting lanes laid out in a star system, combined with an orthogonal grid pattern, numbered stone posts, fences and a hunting lodge, the site demonstrates the application of Baroque landscaping principles to forested areas.

The compromise then (because this must surely have been debated… Surely!?!) is a focus on the landscape; how this Baroque Era layout served as a role model for landscape design. Landscape of power. 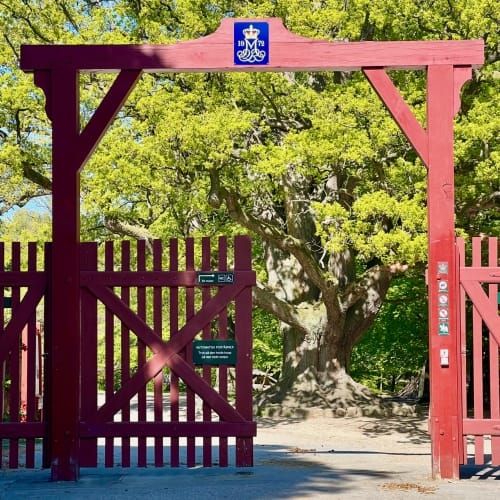 I park at Hotel Fortunen and walk towards the former hunting lodge known as the Eremitage Palace (about 3 km away). 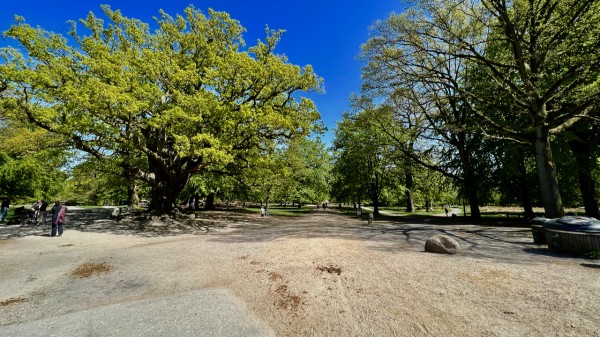 Just inside the entrance at Fortunen 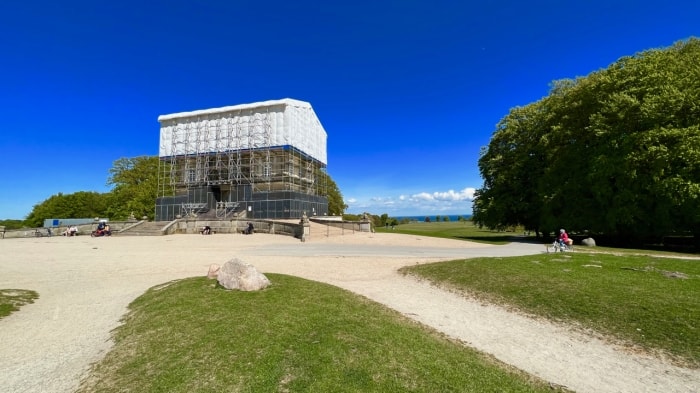 The Eremitage Palace, surrounded by a star pattern grid of paths

– and even more so at the Eremitage. The hunting lodge is strategically located in the highest part of the landscape, where all the hunting routes meet. On this May Sunday, it is covered in scaffolding. Just as well. I’m not really in the mood to see a glorious memorial to a lifestyle promoting animal cruelty.

On a more positive note: ca. 2,000 deer now roam freely around the park. At least at this time of year. There is still hunting going on here in autumn. But sustainably, one hopes. And with minimal cruelty. About 700 animals are killed each year, and 700 calves are born.

The animals seem to stay close to the Eremitage, which is why I have wandered up here to begin with.

And here they are, just a few hundred metres from the former hunting lodge. Many, many, many of them! 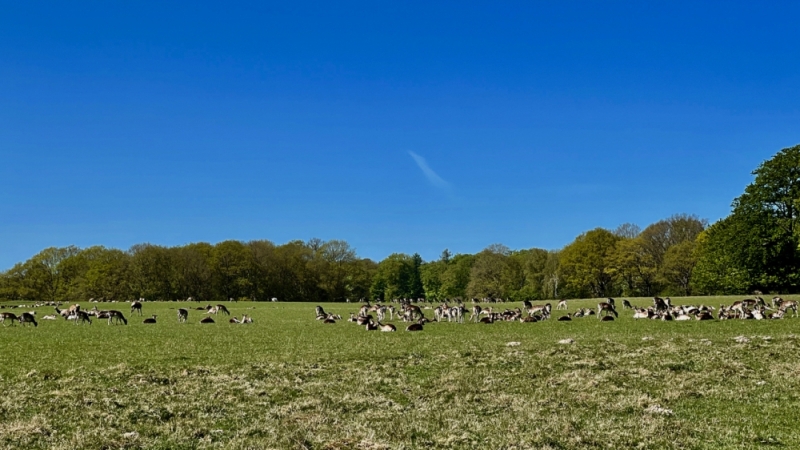 A sight to behold, this large herd of deer, peacefully grazing.

I resist the temptation to go up close. So do the (few) others here. Out of respect for the animals, I choose to believe. We know better now; we have evolved. For the most part. 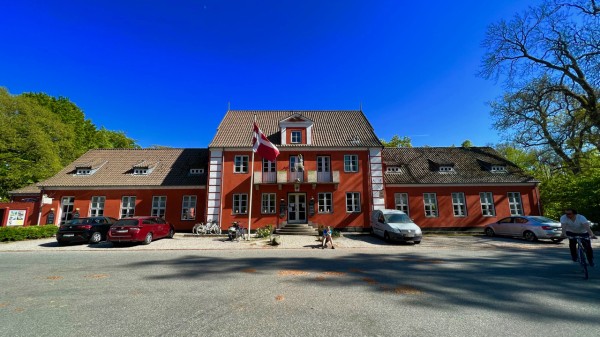 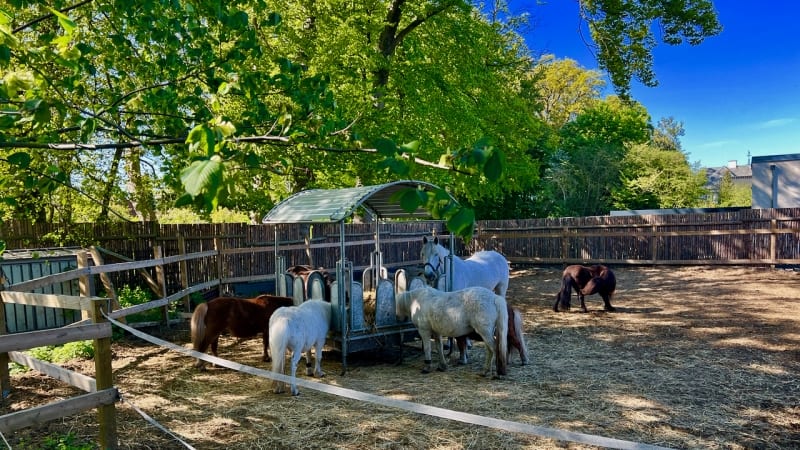 Stables next door to the Fortunen entrance