Sounds and lights at Philae Island

As a goodbye to Aswan, we see the sound and light show at the beautiful temples at Philae island.

Presently located on the island of Agilkia, they were transferred here by UNESCO when the Aswan dam was built. Before that, these temples flooded for much of the year. Seems incredible now! Egyptians, Greeks and Romans have all left their mark on Philae. From pharaohs to caesars. 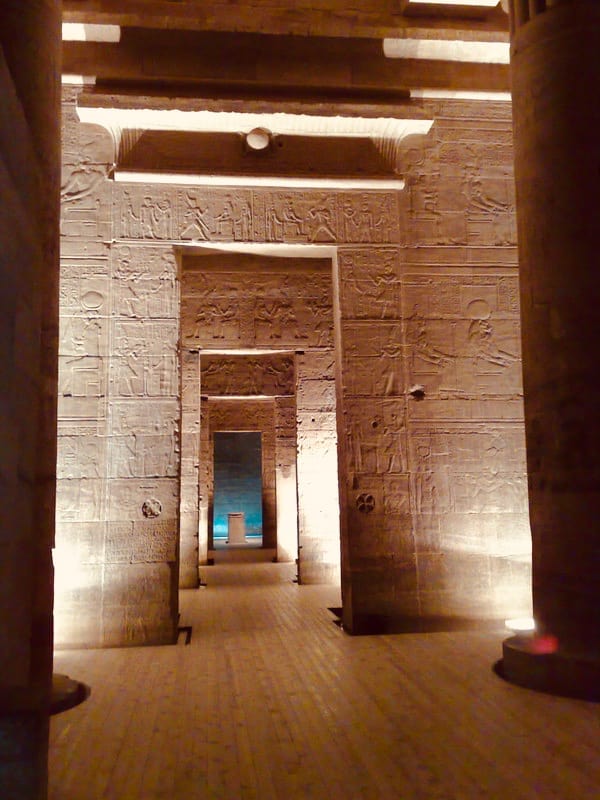 According to my old book, Victorian travel woman Lady Lucie Duff-Gordon visited Philae island and had this to say:

The most beautiful object my eyes ever saw is the Island of Philae… I went and lay on the parapet of the temple. What a night! What a view. The stars gave as much light as the moon in Europe…

Philae is indeed beautiful. There is an ethereal quality about the temples here – more so than elsewhere we’ve seen. Perhaps because the Temple of Isis is the main sanctuary here. Although the temples at Philae are also dedicated to Hathor, to Isis’ husband Osiris and to her son Horus, Isis seems to be the major deity. Isis, goddess of healing and magic. No wonder Philae islands seems otherworldly. I like Isis.

At the sound and light show, they all come eerily alive, creating a mysterious atmosphere in the balmy night. Osiris is killed by his evil brother Set, then brought back to life by Isis.

When we return to Helio, the boat takes off down river towards Luxor. Cat is sad to leave Aswan and those stairs going up to the corniche:

I have walked those stairs so many times – and never again! Aah!!

She is such a little drama queen. A really adorable one!

Philae is part of the UNESCO World Heritage site Nubian Monuments from Abu Simbel to Philae.