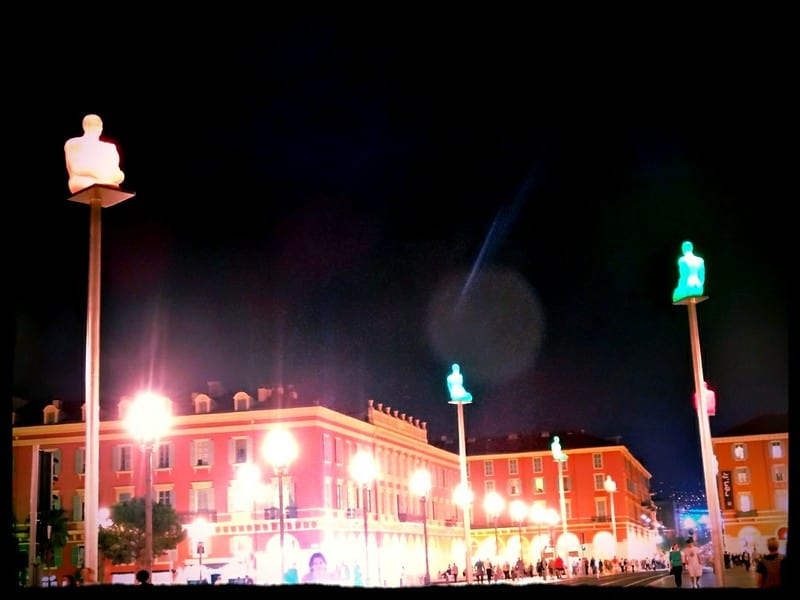 I was recently in Nice on business. My last visit was in 1990 and I could barely recognise the capital of the Riviera now. Surprises around every corner, especially at Place Massena, where the eye-catching Conversation in Nice takes centre stage.

And that’s how they converse, the continents, in a dialogue of colours – with each other, and with us. Where I’d normally hasten along, I’m instead persuaded to stop for a bit – and look up, waiting for the colour to change. What will he say next? What does purple mean? Green? Pink? Hypnotic, almost. 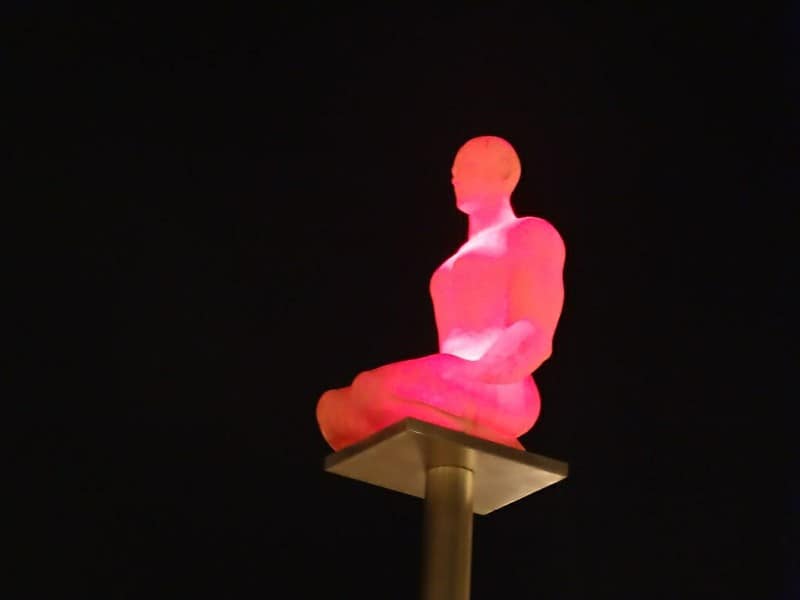 Another addition to Place Massena – or rather, a reintroduction – is the cherished La Fontaine du Soleil – a large fountain comprising five sculptures from Greek mythology: here’s Mercury, Venus, Earth, Mars and Saturn surrounding a magnificent seven-metre tall Apollon in shiny white marble. Again I feel invited to linger, to walk slowly around it, taking in the details. 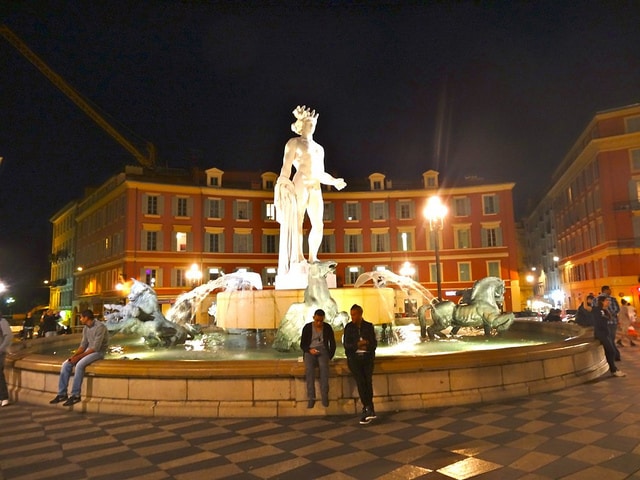 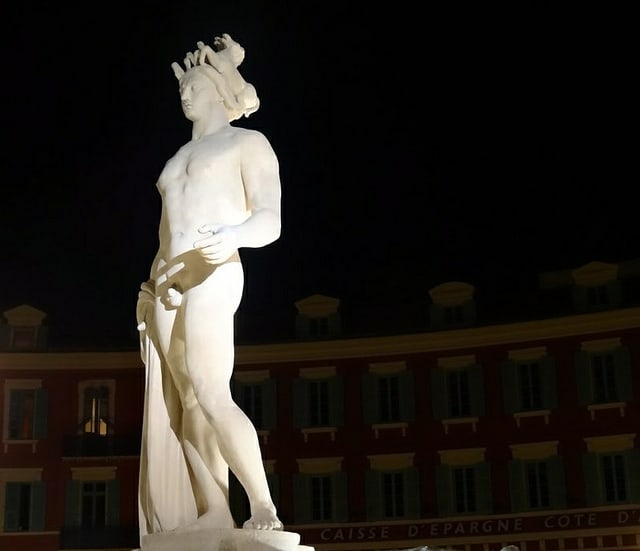 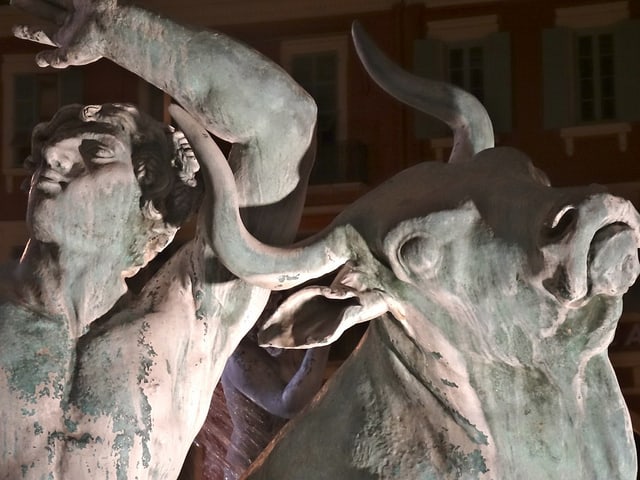 When I was here last, Place Massena was busy with traffic. Today, the square is equally busy, but much more pleasant. Like most of the old town, Place Massena is back in the hands of the city’s pedestrians. And the tram: 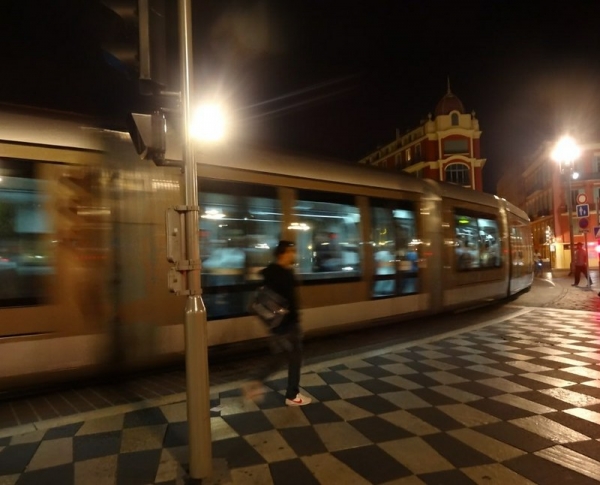 Buildings in Vieux-Nice look beguiling at night, like this red ochre Italianate facade on Place Massena:

… and these, on the lively Place Rossetti: 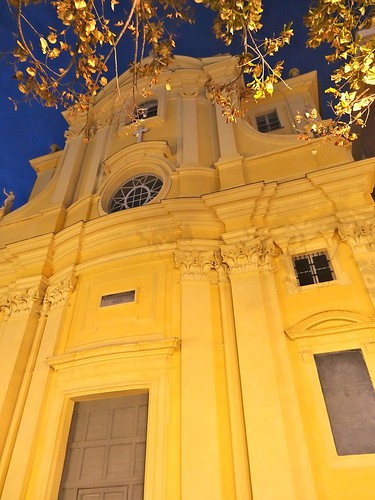 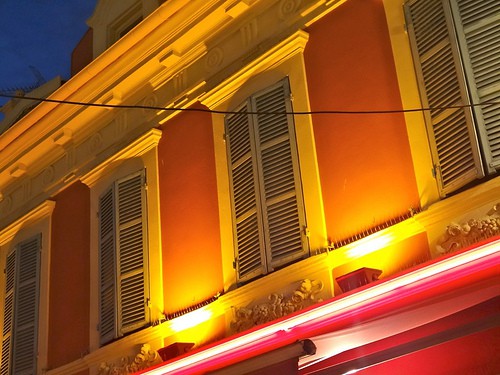 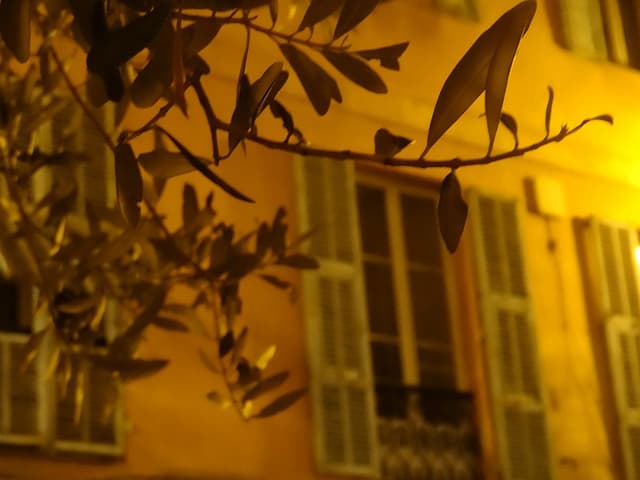 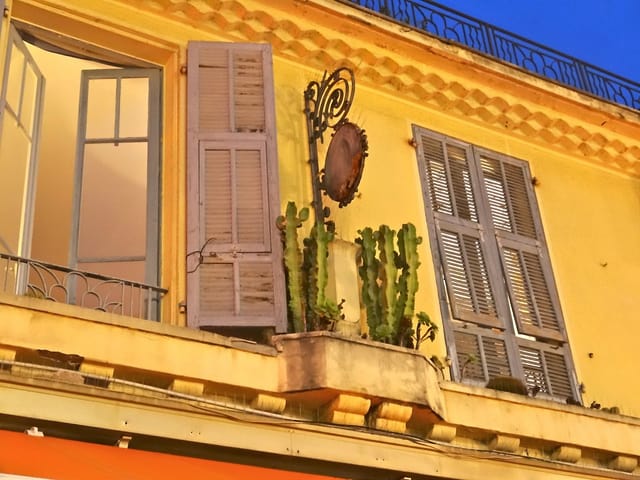 Just a few metres away, Promenade des Anglais hugs the Mediterranean coastline, an excellent venue for a lazy stroll to gawk at shiny people, fast cars and fabulous hotels, such as the legendary Le Negresco – 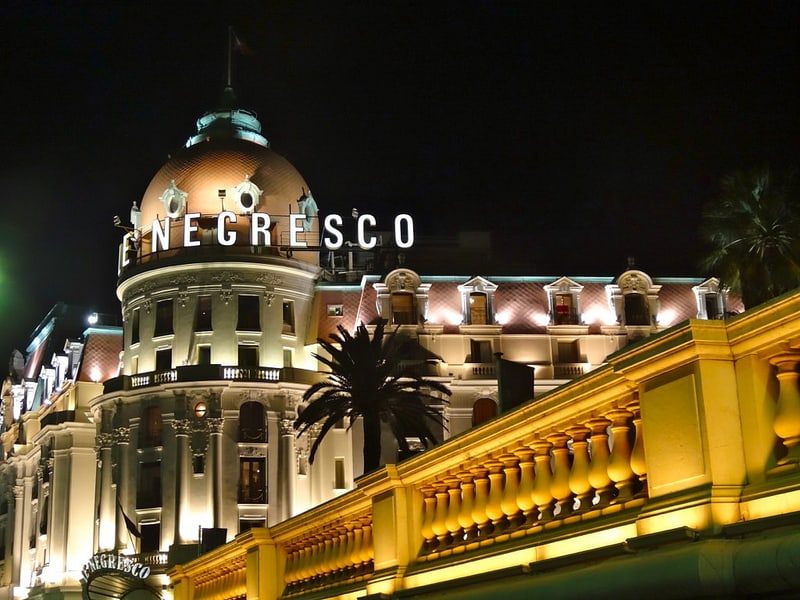 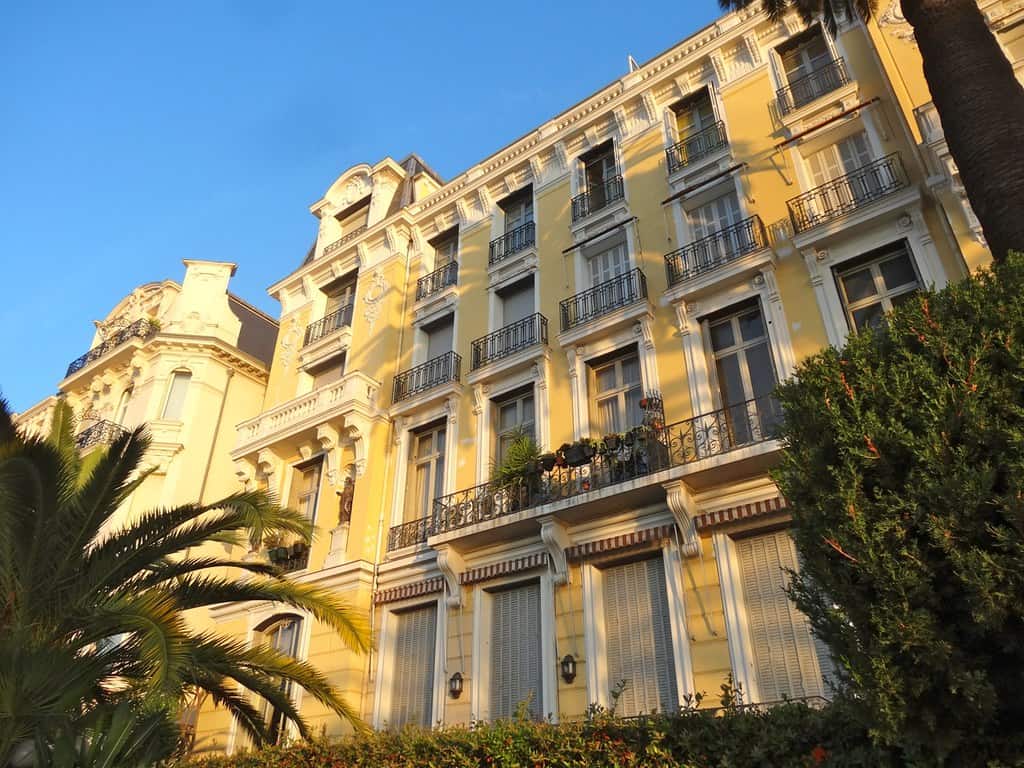 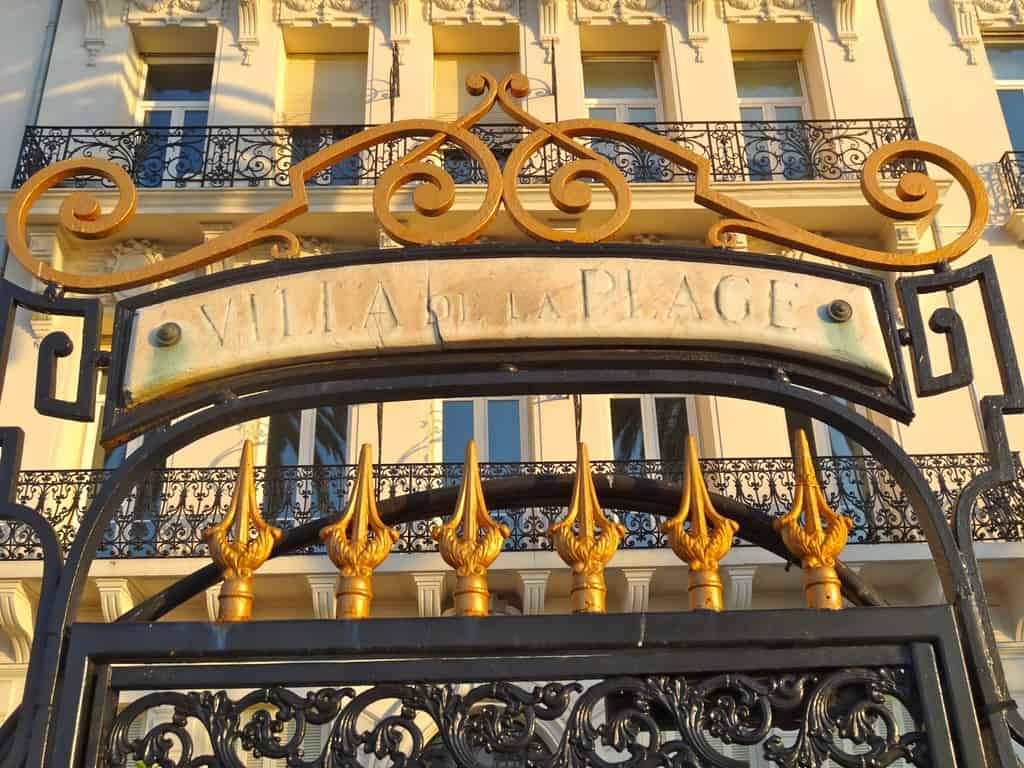 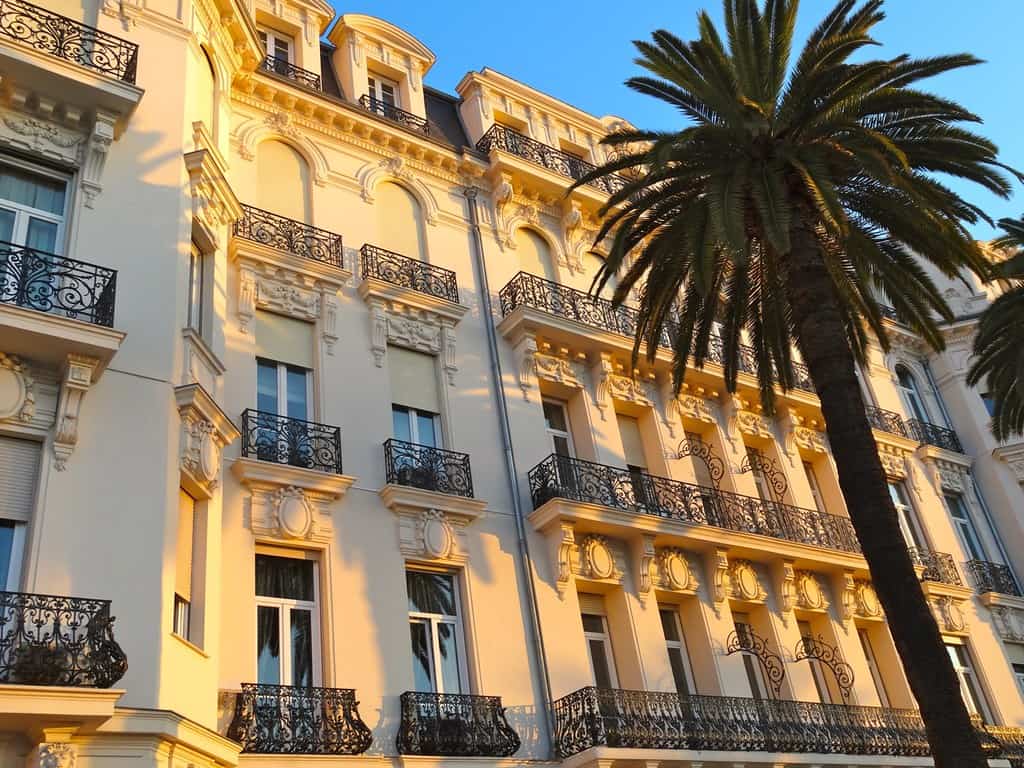 Have you been in Nice recently?