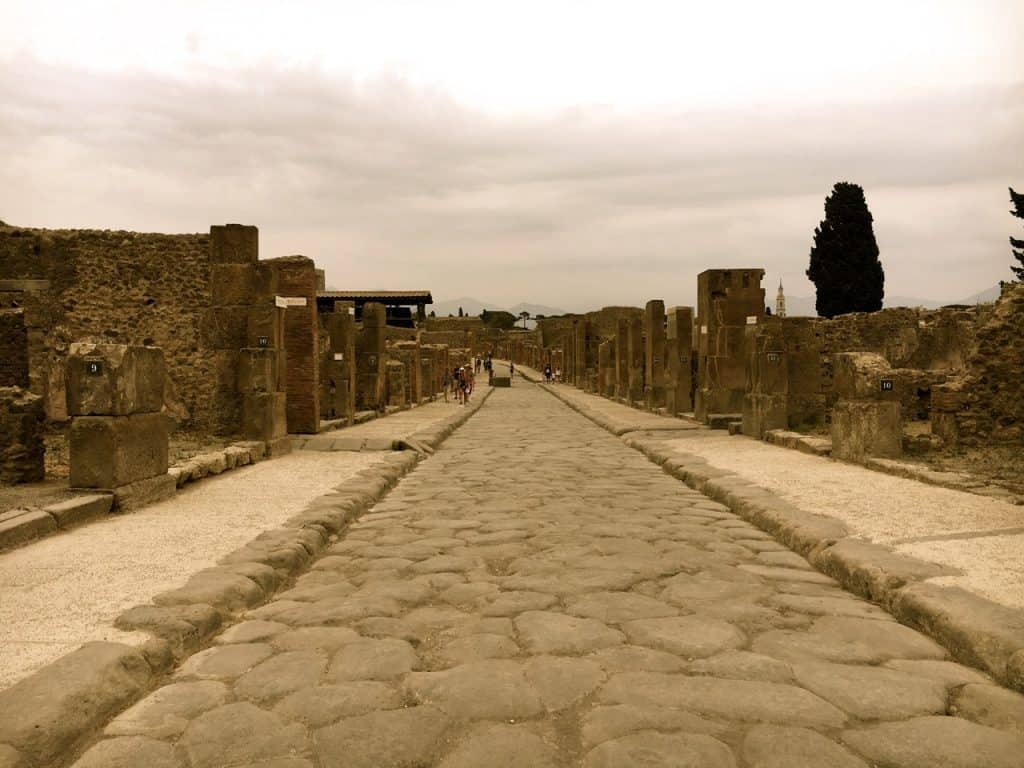 It’s a scorching hot August day, much like that fateful August day 1 938 years ago, I imagine. And much like the residents in 79 must have done, I’m walking the streets of this once wealthy Roman town, then home to 15 – 20 000 people. They walked and worked and played in vibrant, urban surrounds. I walk among Pompeii’s ruins; past remnants of butcher shops, bakeries, baths, brothels…

In the background, Mount Vesuvius looms, a mere 8 km away in the blue haze. No distance at all, really. 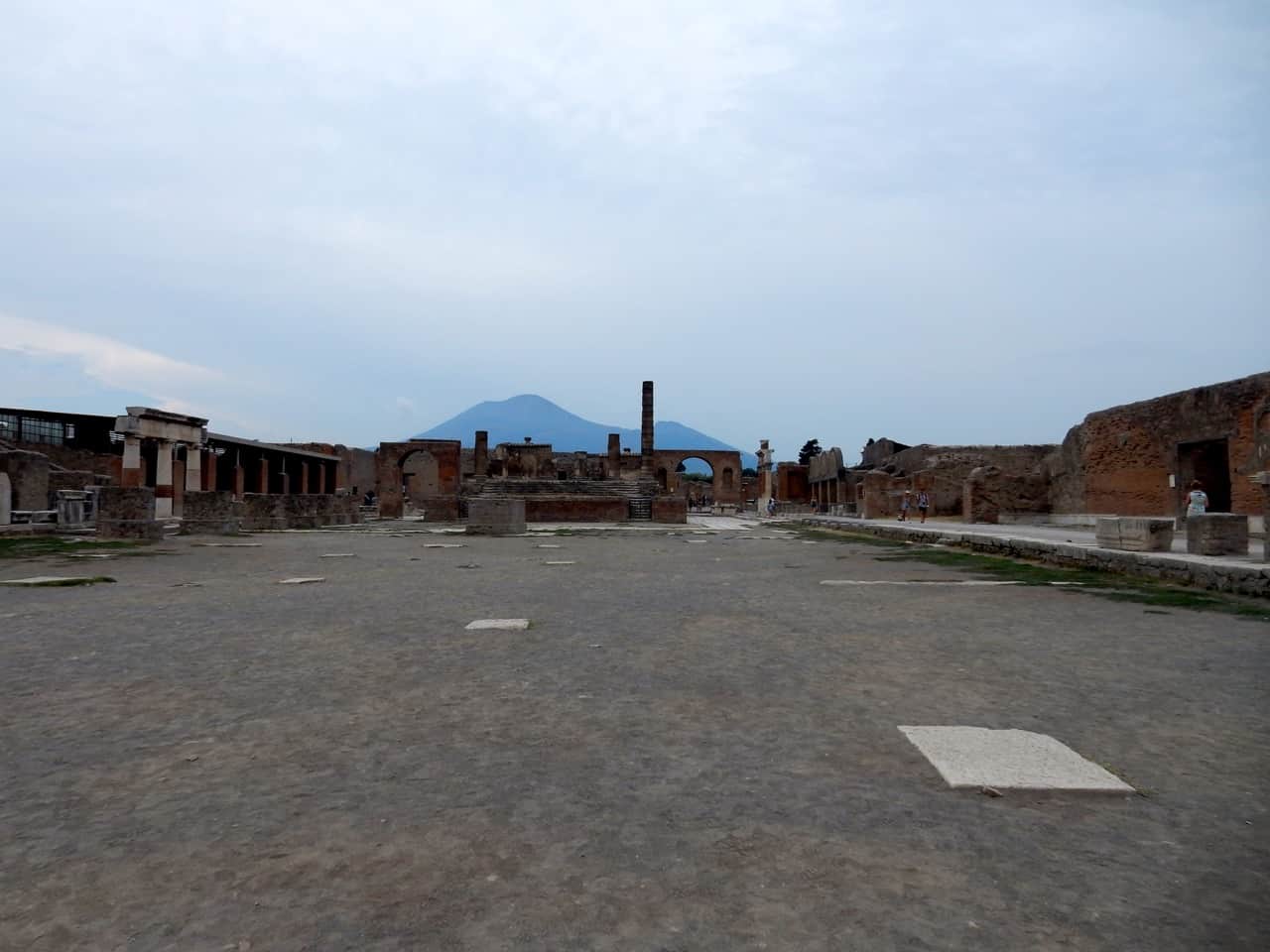 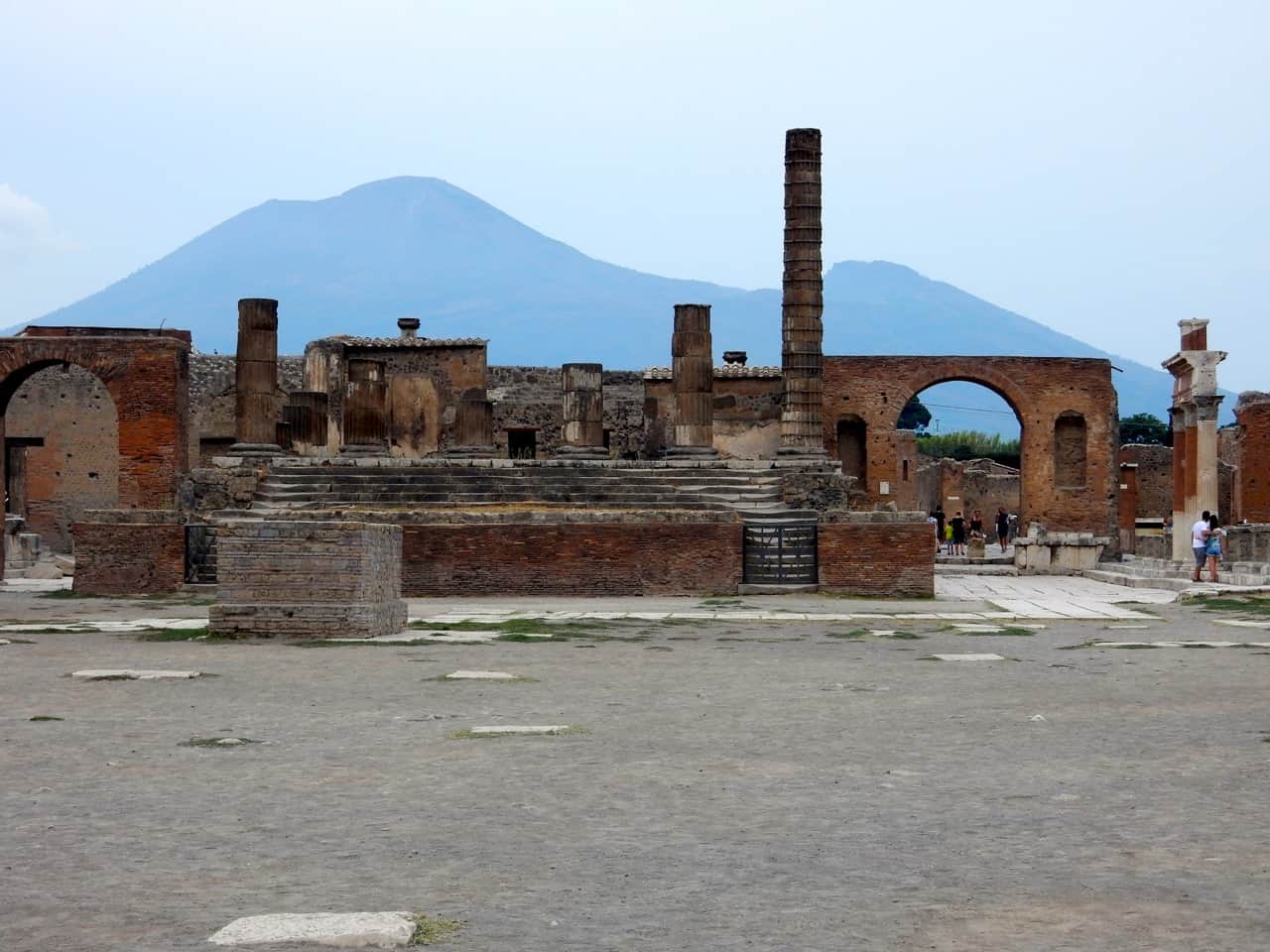 Pompeii marketplace, used as an every day market, for elections and the like. Sinister Vesuvius behind.

On that August day in 79, Vesuvius had been dormant for so long, Pompeii’s residents didn’t even know it was a volcano. If they had known, they probably wouldn’t have grown wine along its slopes. Today, a small scale production of Villa dei Misteri wine is available. The wine the Pompeiians drank. 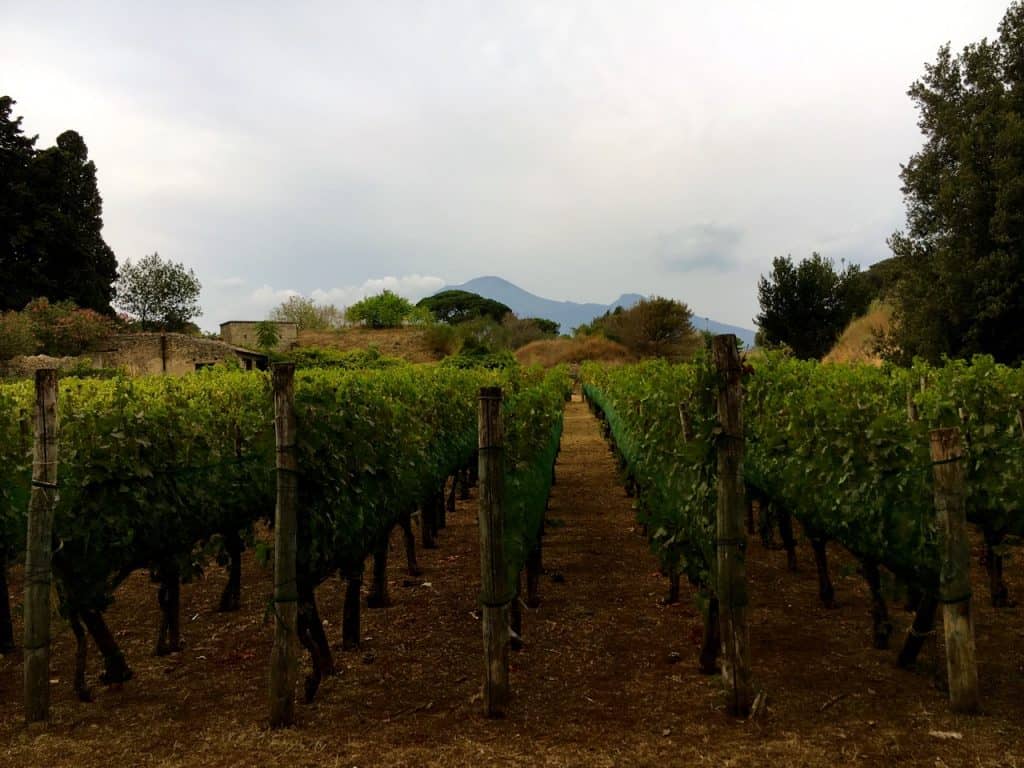 I imagine no one gave the mountain much thought, as they went about their daily business that Tuesday. The butcher butched, the baker baked, the prostitutes did their bit to alleviate men’s, erm… hunger, dogs ran around (the smaller, the louder, I expect, much like today’s canines), kids played in the street…

I keep glancing up at the majestic, slightly intimidating mountain. It has been dormant for years now. Warning systems are more advanced today, of course; evacuation methods, too. And yet…

‘Your systems may be sophisticated,’ Vesuvius whispers. ‘But I am unpredictable. I am moody. And when I lose my temper, you’ll notice.’ 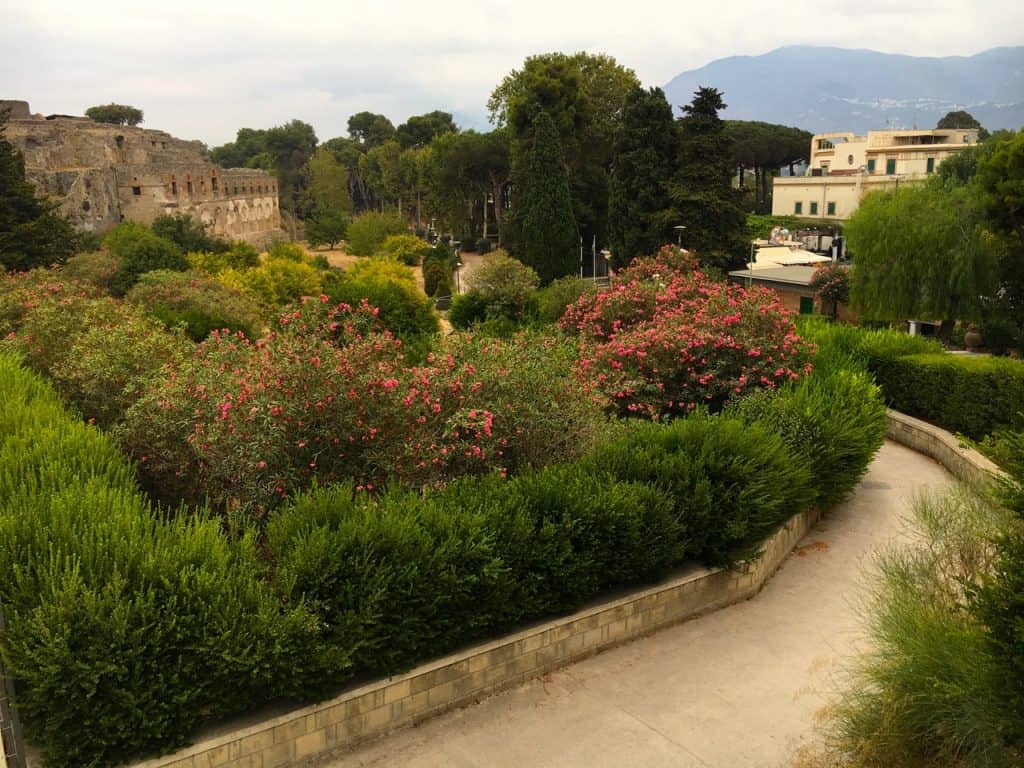 Take a walk – and a guide

I’m on a guided tour of Pompeii, invited by Walks of Italy. And good thing, too. Unless you’re very well schooled in Roman history, and Pompeii history specifically, you’ll miss out on, well, almost everything. My guide is Roberto, an experienced and engaging archaeologist, expert on the history and the excavations. He tells stories about life in Pompeii in 79 and gives insightful answers to any odd question I toss at him (believe me, I’m a champ at asking strange questions). 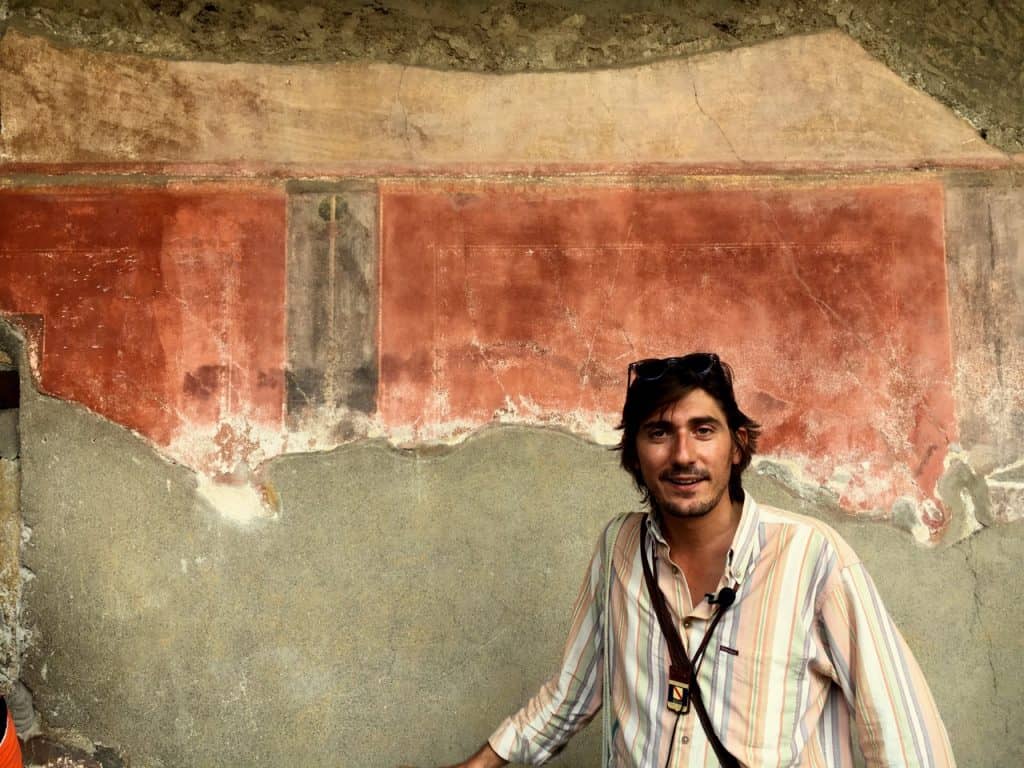 Just inside the entrance, look up and you’ll see where the ground used to be before Pompeii was discovered. 22 feet above us. A little under 7 metres. That’s almost the height of my house.

In 1599, workers digging around the river Sarno (not much more than a creek today), stumbled upon walls with inscriptions. The main architect of the time had a look, then covered it up again, thus helping to preserve it. (Consciously or not, one wonders.) Pompeii and neighbouring Herculaneum were rediscovered in the mid-1700s, and Charles of Bourbon, then King of Naples, began excavations. Two perfectly preserved Roman cities were uncovered.

As long as it was buried, Pompeii was protected. However, once out in the open air, remains quickly deteriorate, both by nature (exposure to light, weather, erosion, water damage) and by humans (theft, vandalism, tourism). About 60% of Pompeii has been unearthed, and archaeologists aren’t in a hurry to excavate further. 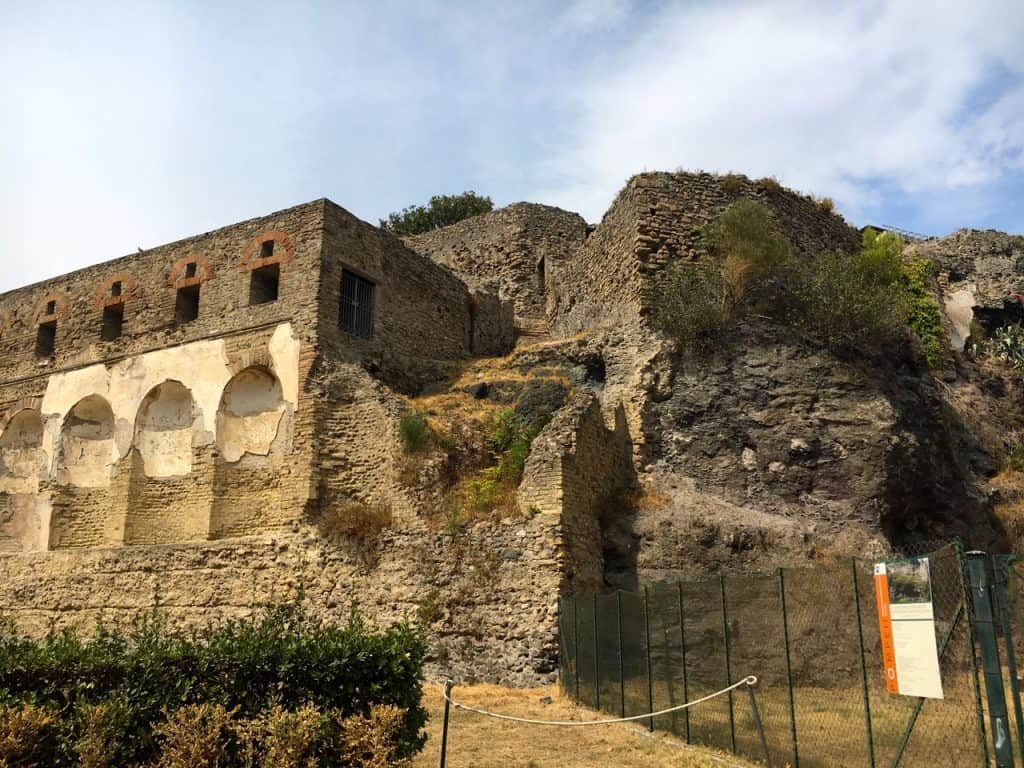 One moment in time, captured forever.

On that August day, columns of ash coming from Vesuvius were 35 km high. By evening, a tsunami of ash had covered everything. People died of gas, asphyxiayed in a few seconds; then covered in volcanic ash. Pompeii was buried 22 feet deep, all in the span of 24 hours. Difficult to imagine the enormity of the disaster.

Ash hardened over the centuries and bodies left cavities in this solid ash. Of the 2 000 thought to have perished in the catastrophe, 1 150 bodies have been found. Plaster casts of human cavities are on display. 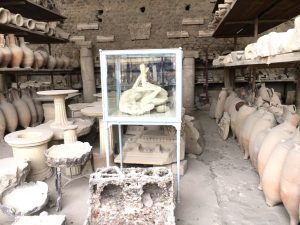 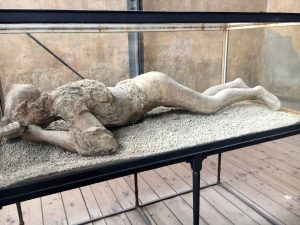 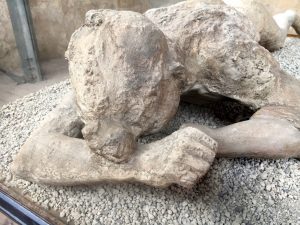 How would we look? We, the people wandering around Pompeii at this moment in time, 31 August 2017? What about the boy running over here? That woman with the green sunhat over there? Me – how would I look? If Vesuvius outsmarted all the sophisticated warning systems, evacuation systems – and simply exploded, choking us and covering us all in lava in a matter of minutes – how would we appear to the casual visitor in say, the year 3955?

Tree roots also left cavities in the solid ash, luckily for us. Thus it has been possible to recreate the Roman gardens. 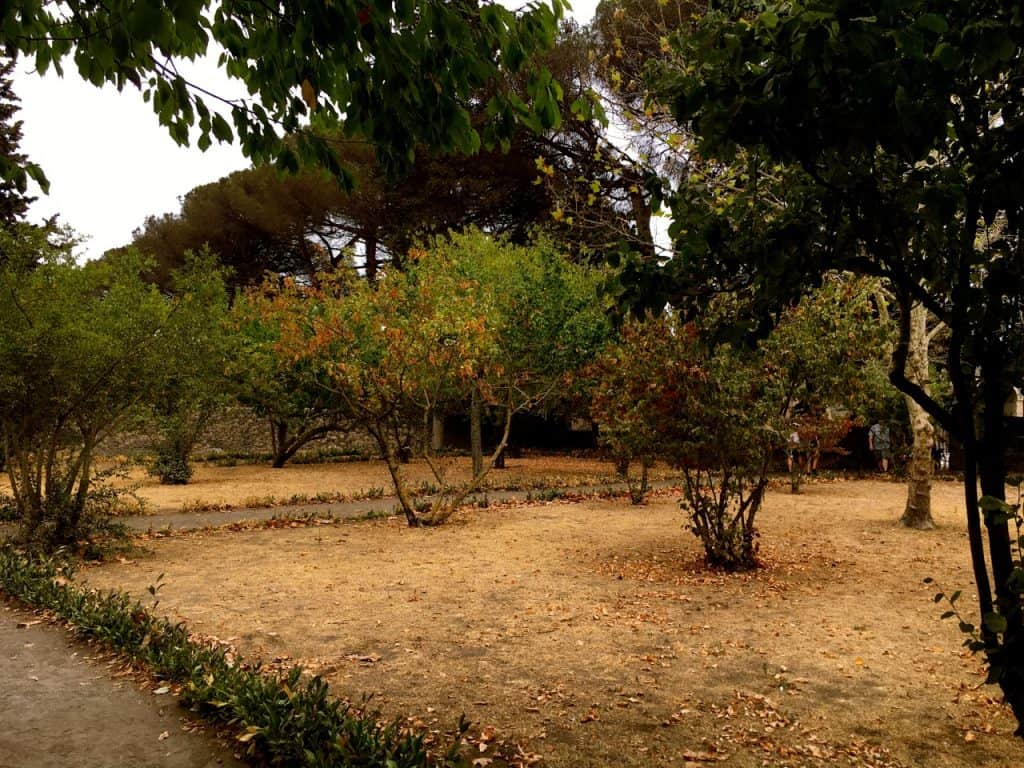 Wandering along the original Stabian Road, I hop from one raised stone to another, much like Pompeii’s residents must have done in 79. Only they hopped across the open sewer. The Romans were nothing if not clean, though, and the sewer was rinsed every day (unlike this place, 1600 years later). 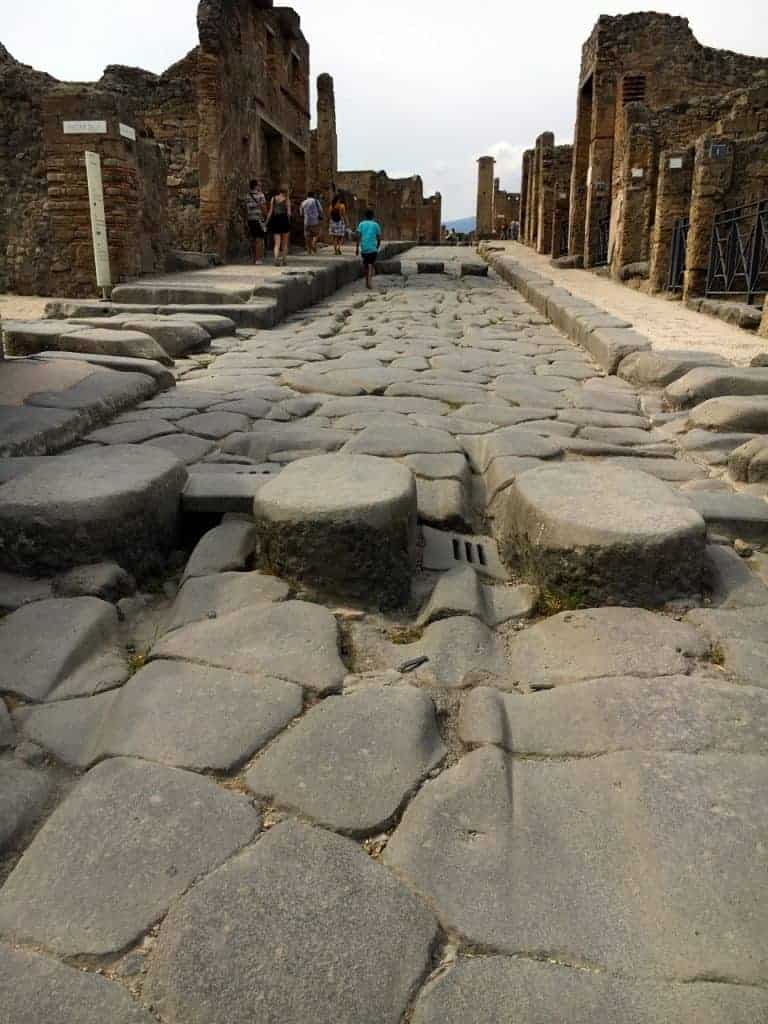 A graffitied wall turns out to be political advertising on an original facade. Wonder which side of the left – right spectrum Cornelium was on. 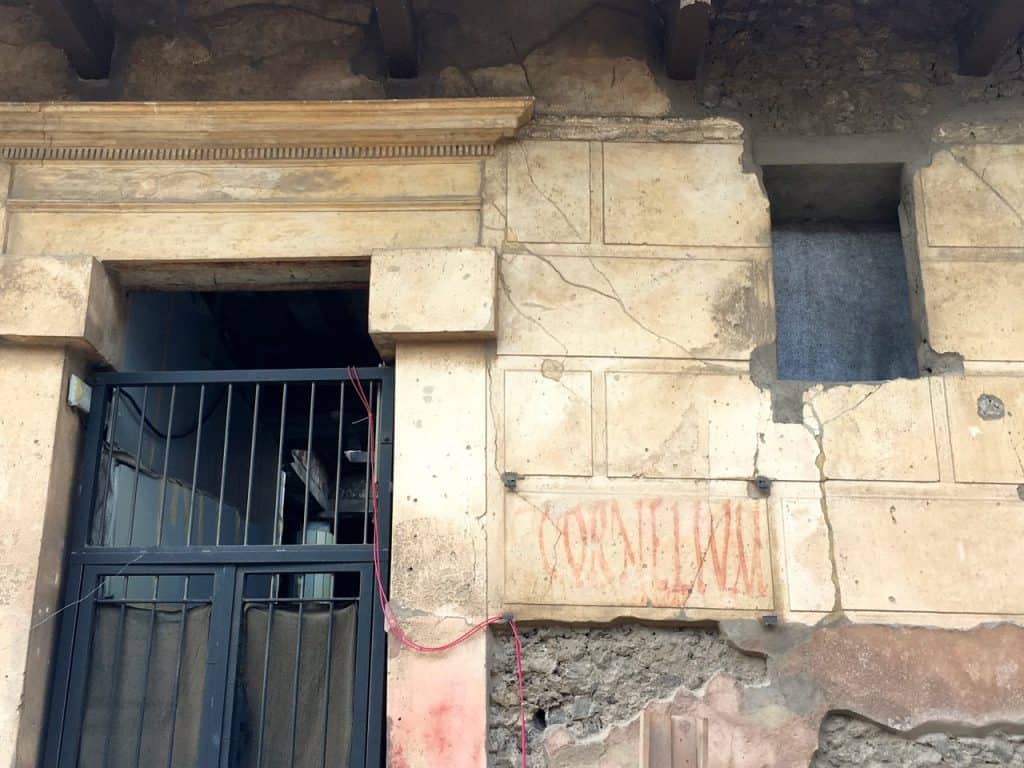 We enter a villa, I love the bright colours here. Romans used basalt, volcanic rock and pumice stone to build, then painted in white or red. Rosso pompeiano, Pompeiian red, was the easiest colour to make, and the cheapest. The rarest and most expensive was the intense blue extracted from the coveted lapis lazuli stone. 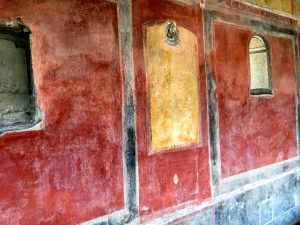 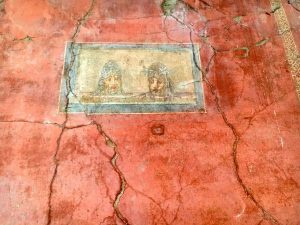 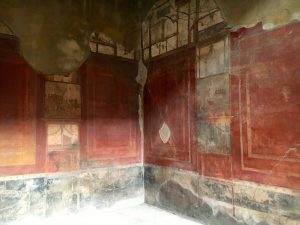 Food and lust in ancient Pompeii

Next is a Thermopolium, a fast food joint, essentially a small room with a stonework counter in front. The offerings will probably have consisted of rough-grained bread, salt fish and chickpea soup. Maybe some sausage as well. Let’s not talk about little dormice fattened up in ceramic pots. 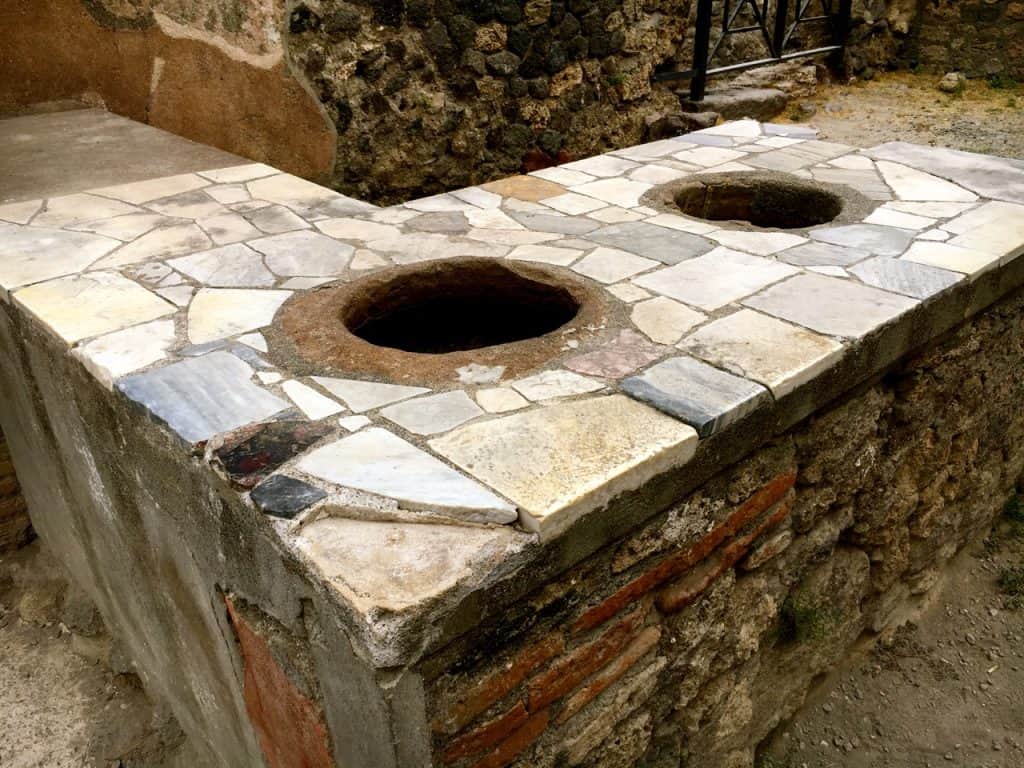 Then, a well-worn road. Notice the deep tracks? This part of town was particularly popular with foreign sailors and tradesmen. 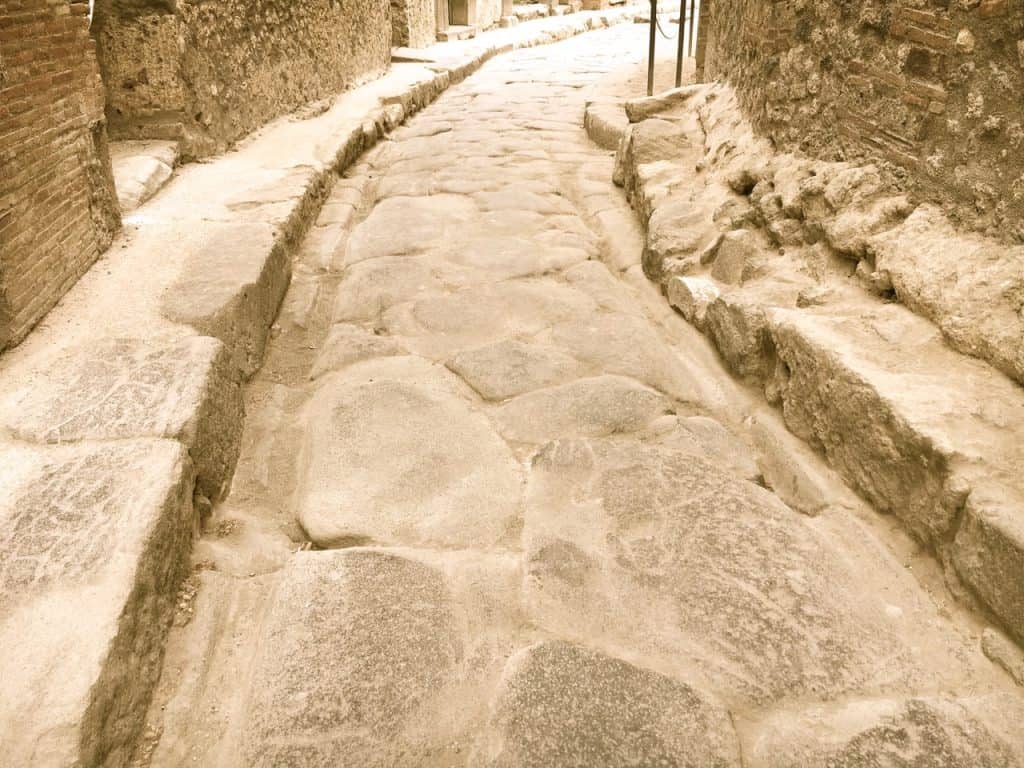 Don’t need to know Latin – or even how to read – to understand the business transactions taking place here. 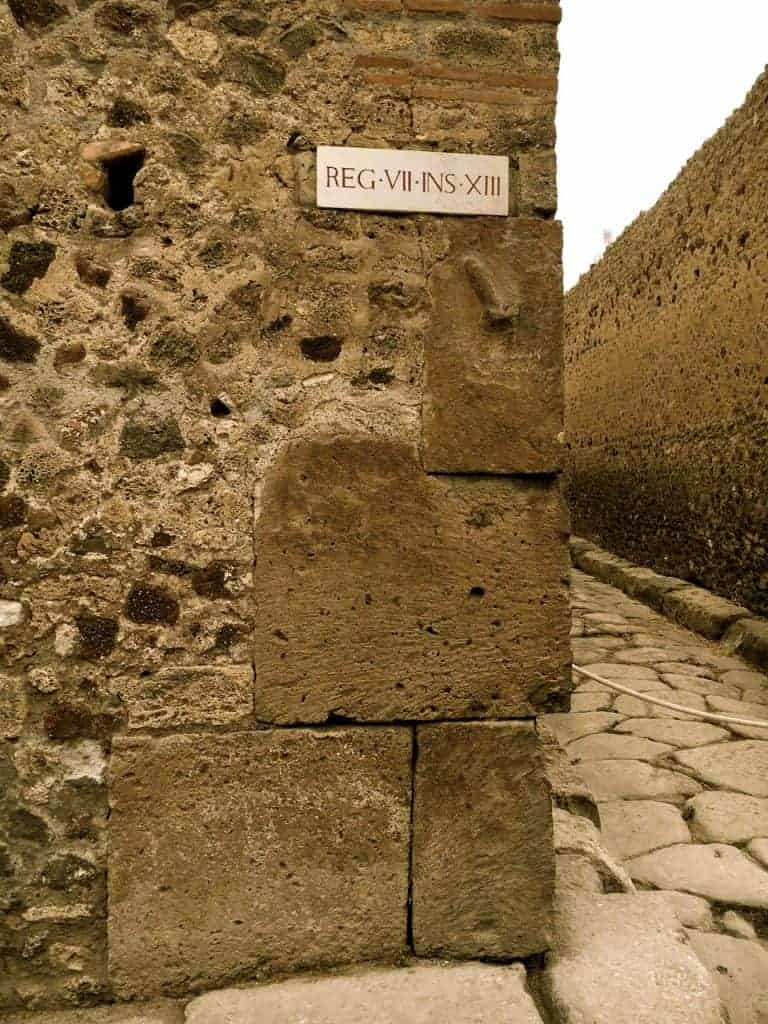 That’s right, we have reached the ancient city’s red light district. Brothels were usually located above shops or taverns, and phalluses were engraved either in the road or set into the facade as here. The largest of Pompeii’s 25 (at least) brothels was the two-storey Lupanare Grande, the Grand Bordello. Lupa means female wolf, Roman slang for prostitute. 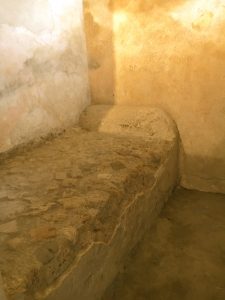 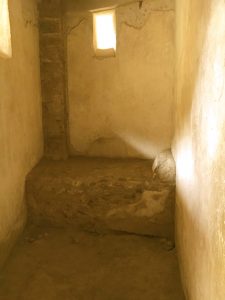 Not the most inviting of locales, if you ask me. Being a prostitute in Roman times was probably no more fun than it is today. Tedious, at best. Archaeological evidence suggests business was a quick in-and-out affair, and cheap enough even slaves could afford it.

Customers – and possibly the prostitutes as well – could leave comments (move over Facebook!) More than 100 have been discovered around Pompeii, such as Sum tua aeris assibus II (I’m yours for two bob), and Lucilla ex corpore lucrum faciebat (Lucilla makes money from her body). Others include Myrtis bene felas (I’ll leave you to figure that one out for yourself; it has to do with Myrtis’ particular talent) and Felix bene futuis (You tell me: would that be a right or left swipe?) You can see more mind-blowing erotic art from Pompeii in the National Archaeological Museum in Naples; look for the Gabinetto Segreto.

There, enough of the sex talk. Not far away, you can see a house with a snake symbol on the wall. The doctor handed out condoms made of animal intestines. Also nearby are the more virtuous (or… what do I know?) baths: the frigidarium, tepidarium, and calidarium; easy to work out which is what, even if one doesn’t know Latin.

We wander over to Pompeii’s amphitheatre – or spectacula, its name at the time – and have a look backstage. Now, this is interesting. Why, you ask? Isn’t it just anther amphitheatre? Well yes, but its design is particularly clever, you see, excellent for crowd management. No stampedes or riots.

…enough space for everyone. Entrance and exit were simple, elegant. It wasn’t just a stadium, it was an integrated part of the city design. 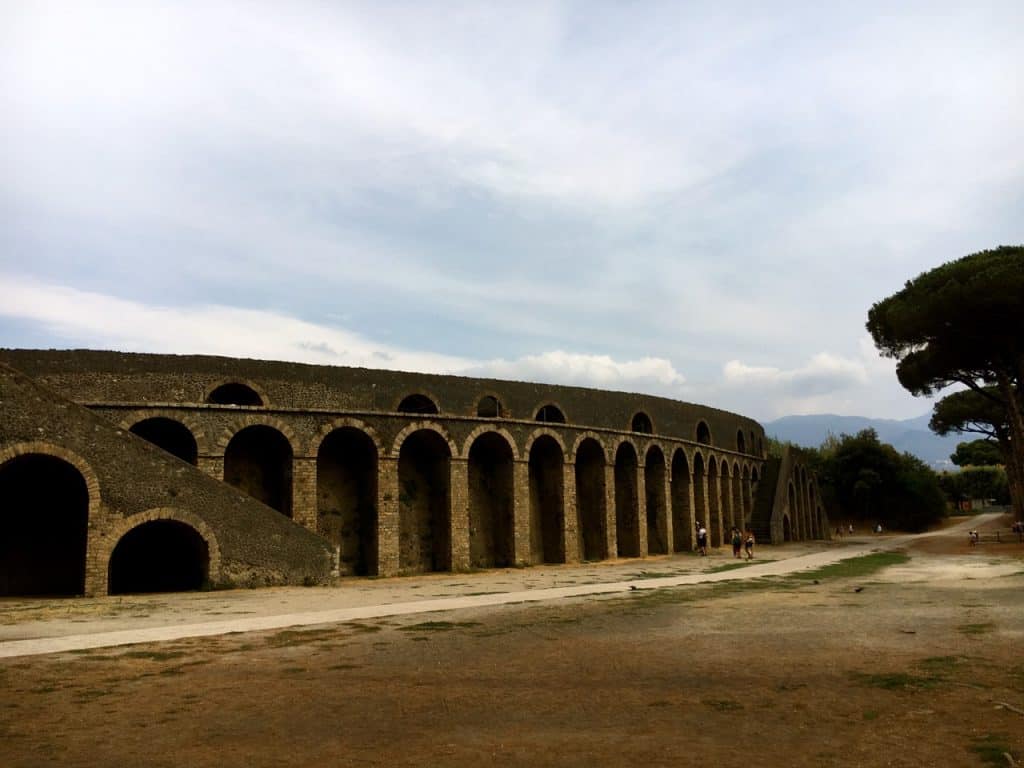 Why not simply follow the example of Pompeii when building modern stadiums then? Limited space – and profitability.

Pompeii has been subject of numerous stories for centuries, and it could be here on Sophie’s World, as well. (Humorous, intelligent and raunchy graffiti being a story in itself). But, gotta stop somewhere. The chilling words of the only eyewitness to the devastation, Pliny the Younger, seems a fitting finale:

“You could hear the shrieks of women, the wailing of infants, and the shouting of men; some were calling their parents, others their children or their wives, trying to recognise them by their voices. People bewailed their own fate or that of their relatives, and there were some who prayed for death in their terror of dying. Many besought the aid of the gods, but still more imagined there were no gods left, and that the universe was plunged into eternal darkness for evermore. ”

“There were people, too, who added to the real perils by inventing fictitious dangers: some reported that part of Misenum had collapsed or another part was on fire, and though their tales were false they found others to believe them.”

It seems fake news isn’t only a 21st century phenomenon, either.

Archaeological Areas of Pompei, Herculaneum and Torre Annunziata is a UNESCO World Heritage site.
Here are more heritage sites around the world.

Disclosure: My visit to Pompeii was courtesy of Walks of Italy. As always and forever, all words, opinions and views are mine, all mine.