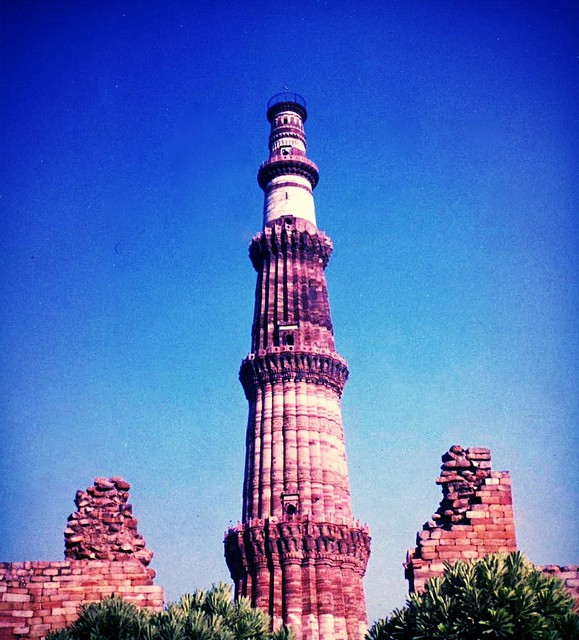 The 72.5-metre-tall red sandstone and marble Qutub Minar is the tallest structure in Delhi, and the tallest brick minaret in the world. It’s also an excellent example of Indo-Islamic architecture and one of the major sights in the Indian capital. When we visited, it seemed to be equally popular with foreign and local visitors.

Construction of the Qutub Minar began in the 1190s. Over the years, more stories were added. As a result, the tower tilts slightly to one side. (Thought the photo was crooked, did ya?)

Qutub Minar is more than just a conical tower. It’s part of an ancient complex with evidence from several periods of history. Inscriptions on the walls are gorgeous Arabic stone carvings of Qur’anic verse from the Mughal era. But there’s also some Brahmi.

Sadly, it’s not possible to go inside the monument and climb the 379 steps. 32 years ago, a power failure caused panic and 45 people were killed, many of them children on a school outing.

Just as well one can’t enter perhaps. According to this article in the Times of India, Qutub Minar began tilting soon after its construction. The tower now leans 25 inches and there’s concern it will lean even further due to rainwater leekage.