Spring of 2020: days, weeks, months (we’ll stop there) dominated by a vicious virus. The spring of corona.

‘If the mountaine will not come to Mahomet, Mahomet will goe to the mountaine’, said Francis Bacon nearly 400 years ago.

‘We can’t travel the world. But we can bring the world to us,’ say I. Reading is one avenue. 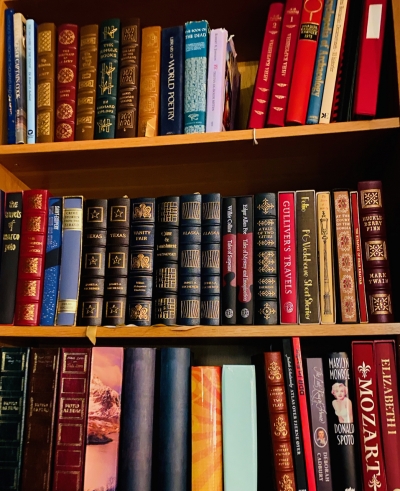 What are you reading these days?

Keeping up with corona? I am. Forever curious, I’m reading stats and science as new discoveries about this submicroscopic beast emerge daily.

What else? Well, you’re here, so you’re reading a travel blog. (Much appreciated.)

But what about those books you’ve always meant to read? I once forced myself to read Moby Dick. Took a few days. Draining days. Tedious days. Days I’ll never get back. Oh! thou clear spirit of clear fire, you are just not my kind of book. But it could very well be your kind. And that’s the point: if War and Peace or Don Quixote or the collected works of Billy Wiggle-Dagger truly interest you, speak to you and draw you in, now is the time. But if it’s out of some misplaced sense of ‘should’, I say: ditch it. Shtup should.

A digression. But fear not, it will make sense.

One June day, 11 years ago, I was off to Sardinia with Cat. At Oslo airport, we met Ketil, who I’d worked with in the past, and who had now recently retired. We had a few things in common, he and I: both slightly obsessed with exploring the world’s curious places. This wasn’t the first time we had run into each other at the airport. When time permitted, we’d stop for a coffee and a chat: exchange travel plans, new discoveries, inspiration…

Ketil said he hadn’t been to Sardinia yet. He made it there a few years later, meeting up with a group of friends from long ago. Unfortunately, he died suddenly and unexpectedly there. Sad, but also fitting somehow, that he died while travelling, surrounded by friends.

On that summer morning in 2009, Ketil told us he had some British Airways frequent flyer miles about to expire. He had had a look at the flight schedule to see if there was somewhere he hadn’t yet been. There was. 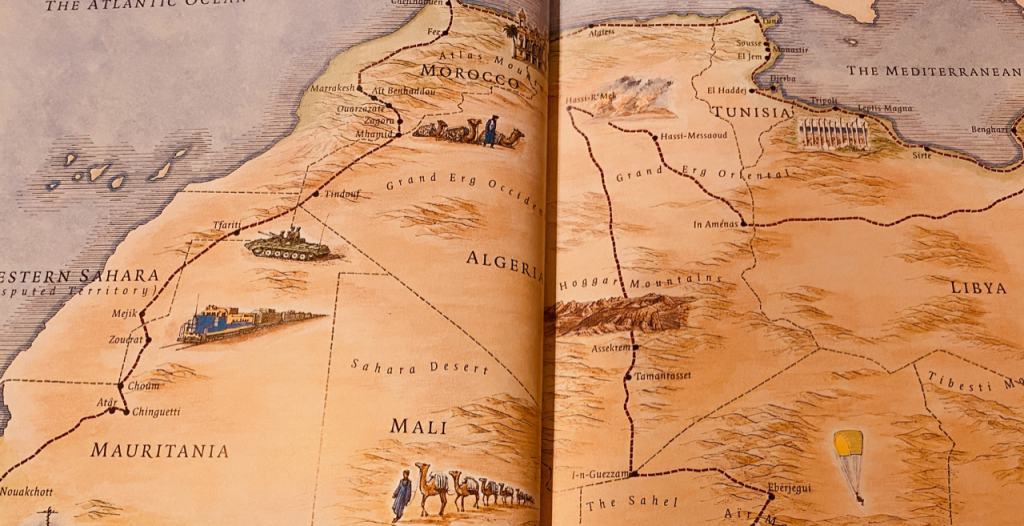 No. But wow! Algeria was firmly on my list of travel dreams. Still is.

Fast forward to the present, and I, in yet another restless fit of cleaning up and clearing out, stumble across an old copy of La Peste (The Plague).

As a teen, I read. A lot. Sometimes, especially on cold winter days, I’d curl up next to the heater in my room and read all day. Sometimes many days. Skipping school. Skipping meals. Living in that other world.

La Peste was particularly memorable. Set in the Algerian port city of Oran just as a plague sets in, it’s dream-inducing (or nightmare-inducing, I should say). Camus’ descriptions are vivid; almost physically tangible. It’s easy to forget his plague is a metaphor – for fascism (he wrote it in 1947), or for any kind of illness that overtakes society – physical or psychological.

For some reason, I thought it would be a good idea to have another read-through now in this corona-dominated world. Do I recommend you do the same? It depends.

On the one hand, it feels much less like a metaphor these days. Much less abstract. It doesn’t take a huge leap of the imagination to be right there in Oran as the plague takes hold. A few times, I look down to make sure dying rats aren’t actually crawling over my feet. Too close for comfort.

On the other hand, the psychological and sociological mechanisms are fascinating to observe. Authorities are slow to accept the seriousness of the situation; they don’t want to cause disruption, and refuse to call it an epidemic. Then there’s quarantines and social distancing, and after the daily death toll reaches 30, Oran goes on lockdown. There’s an anxious wait for a serum from Paris, which is delayed. People are out and about along the boulevards, and in restaurants; that “frantic desire for life that thrives in the heart of every great calamity.” There’s a bit of violence and robberies. Martial law is imposed. Père Paneloux tells the town the plague is God’s punishment for their sins.

It all sounds familiar, doesn’t it? Let’s hope we’ll come to the same conclusion as the narrator,

There is more to admire than to despise in humans. 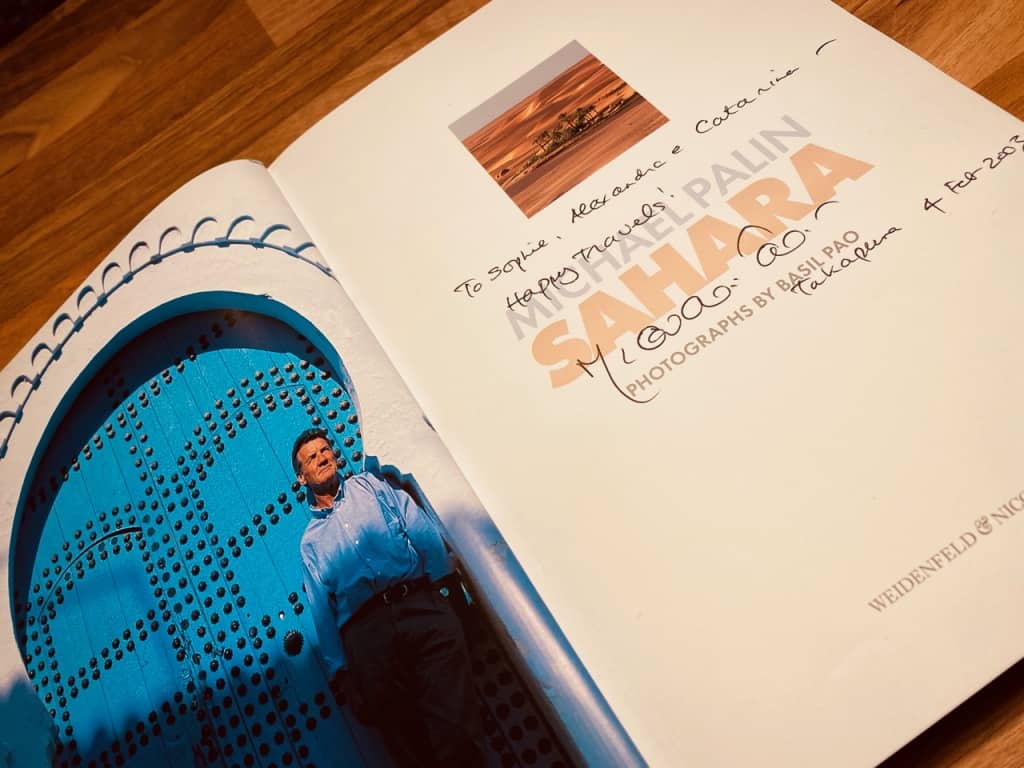 Visiting Algeria is decidedly wish list material. If you want to read about that enigmatic country, however, La Peste is probably not your best choice of travel inspiration just now. So I’ve dug out Michael Palin’s Sahara (reminding me of a star struck moment at Paper Plus in Takapuna a long time ago).

I’m disregarding the somewhat dire warnings in the chapter introduction (back when MP travelled, in the early noughties, Algeria was trouble and lawlessness). Instead, I’m reading about his travels along the road from I-n-Guezzam to Tamanrasset (where, by the way, Margaret Thatcher’s son once got lost for six days during the Paris – Dakar rally).

I wonder if the wreck of an old, rainbow-painted Citroën 2CV, half-filled with sand, is still there. And whether the buildings in Tamanrasset are still painted in a regulation shade of blood-brown. North towards Assekrem, I’m keen to see the strange and unforgettable Hoggar Mountains (UNESCO World Heritage), with rocks resembling medieval castles.

(Which reminds me of quirky-looking mountain sides in Bulunkul along the Pamir Highway.) 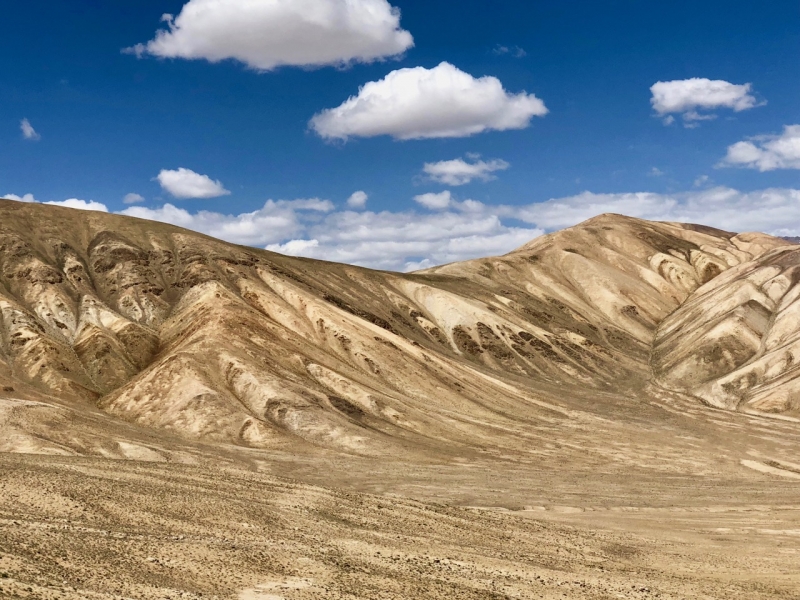 I want to experience a night, cold as a Scottish winter, in the Sahara. And a pre-dawn where the stars fade slowly and a ‘faint lemon-magenta glow shades the eastern horizon’.

MP also stops at In Amenas, by the border with Libya. Job titles at the joint Algerian-British-Norwegian natural gas development project there, include roughnecks and roustabouts. A summer job as a roustabout! The name alone.

Wiki tells me a roustabout is a worker with broad-based, non-specific skills. Non-specific! I could do that. Though maybe not at In Amenas. Chilling name. I remember seeing the face of Site Manager Tore Bech repeatedly on the news during the early weeks of 2013. Along with 4 other Norwegians, 6 Brits and at least 26 other expats, he was held hostage and eventually killed by terrorists.

More than 80% of Algeria is covered by the Sahara. I feel curiously at home the desert. Something about the landscape: the scorching heat of the desert and the unrelenting cold of the Arctic tundra. Both rugged and extreme. Both captivating and beautiful. 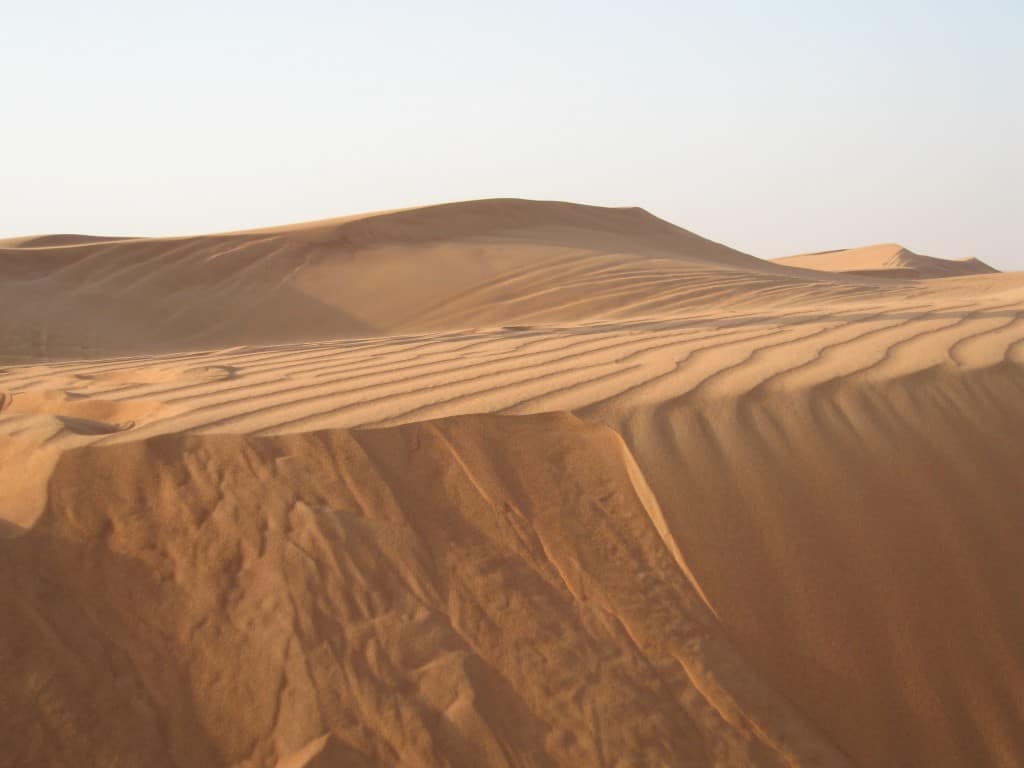 I once interviewed the Managing Director at Snøhetta, innovative architect/design firm of Library of Alexandria fame (as well as Oslo Opera House, September 11 Memorial Pavilion @ Ground Zero, various projects on the Arabian Peninsula, etc). I asked him if he also saw similarities between the landscapes.

Algiers, Oran, and back to our friend Camus

Back in 2002, MP took the train from Carthage to Algiers. I’d like to do the same. 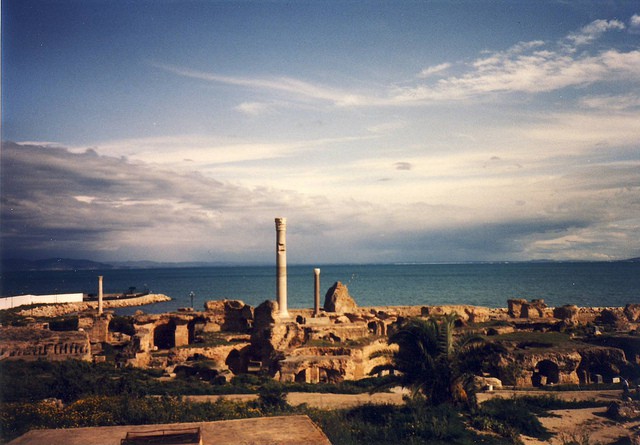 In Algiers, MP visits Camus’ family apartment at 93 Rue Mohammed Belouizdad. I want to look out that window, too; observing everyday life of Algiers as he did nearly 100 years ago. I also want to visit the casbah (also UNESCO), and see the Shrine of Abderrahmane, where women come to boost their fertility. (Strictly for observation and no boosting on my part.)

MP then continues his train journey, onwards to Oran (of plague fame, as you may remember) on what once was the Algiers – Casablanca Express. I will have to check the current security sit, but if it’s anything like 18 years ago, I might have to take a rain check.

Over the last ten years, this has been the most bombed railway line in the world; it passes through an area known as the Triangle of Death… and terrorists have been known to board the train and kill people ‘in awful circumstances’.

Slitting throats seems to have been the method of choice. But then, reassuringly: ‘the damage nowadays is more likely to be inflicted by bored teenagers throwing stones.’

Nearing Oran, MP notes that sad as it makes him to say so, this is a vision of callous decay.

Give me callous decay! And I want to see the railway station, a ‘magnificently stylish example of the Mauresque style, full of height and light and space’. (That’s my living room right there, except the Mauresque bit). And the Hôtel Terminus next door, with its layers of dust, broken lighting and holes in the ceiling. 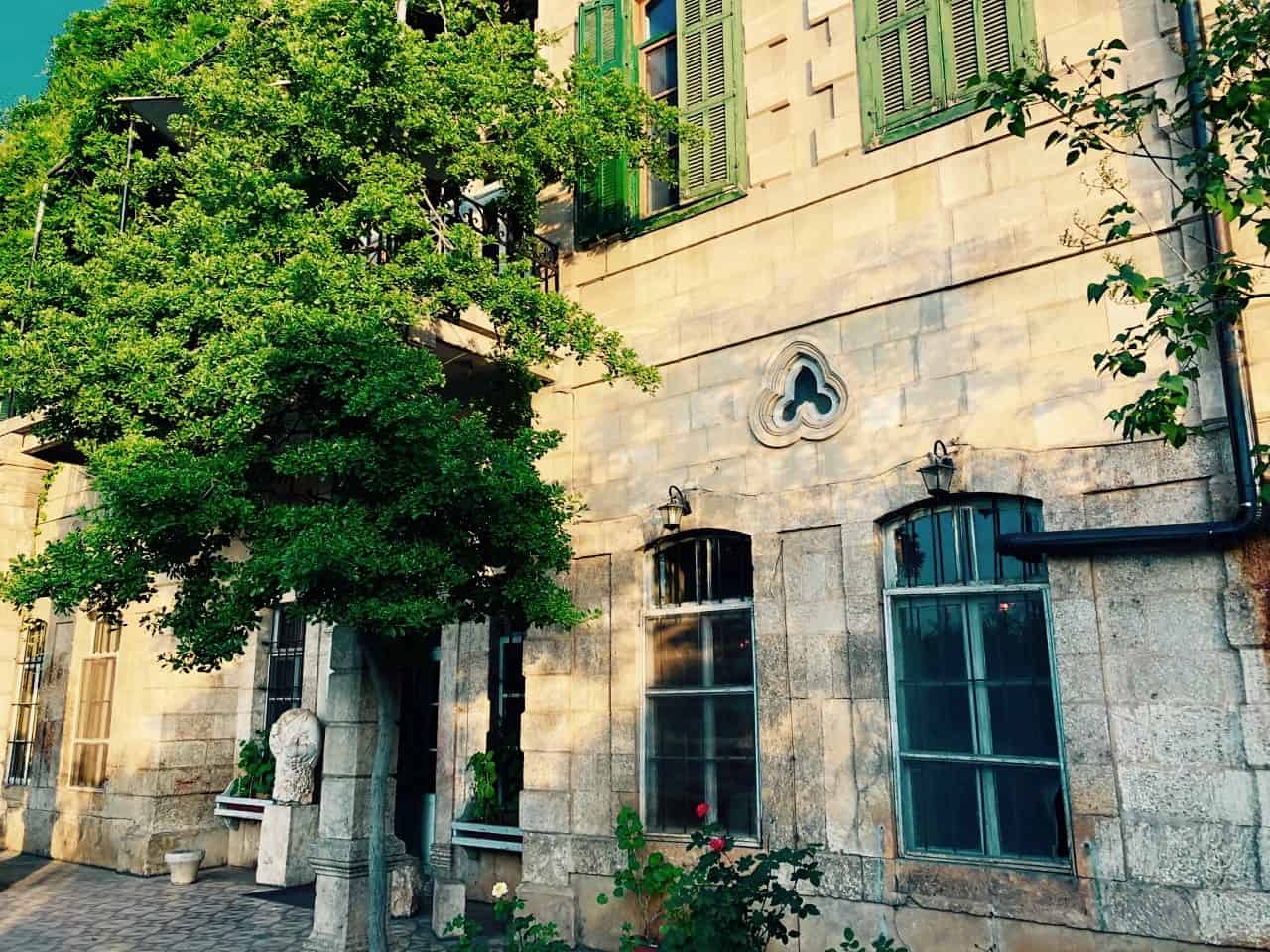 Walking down from the 10th floor of his hotel, MP negotiates a stream of water, running down the corridor from under the door of room 306. Then he heads for the Opera House, a ‘splendidly florid edifice’, where Orpheus collapses on the stage and dies from the plague. In The Plague. And so we’re back to our friend Camus yet again. La Peste. And our current pest. Full circle.

Where do you dream of travelling?

And what are you reading these days?