Bregenz, though not perhaps Austria’s best-known city, is a city dear to me. When I was 15, a friend and I spent the summer, officially doing a language course, but in reality concentrating on beer, boys and night clubs we were much too young for. (These things were a bit more lax back then). We had a grand time.

Almost 30 years later, I had been in Switzerland for work and now spent a few days roaming about the Alps for a bit. Having finished a nostalgic re-visit to Liechtenstein, I discovered a train heading for Bregenz. Impulsively, I hopped on and immediately began pondering.

Going back to Bregenz 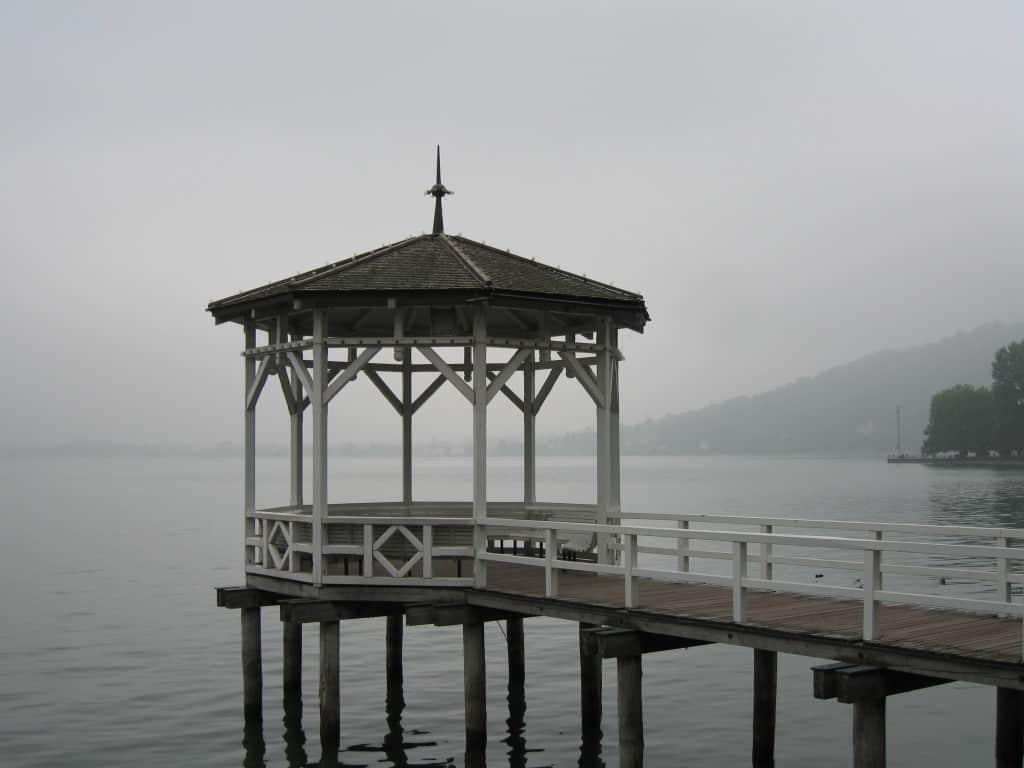 Would I recognize the city? Would it look the same? Did I even remember how it looked? I did remember wonderful walks along Bodensee (Lake Constance). I remembered the café where we had hot chocolate on rainy days – and ruthlessly tried to pull the toupee off a waiter. And Esseda 2000 – “our” nightclub. We went every night.

On sunny days, we’d walk the 6 kilometres between the town centre and our temporary home in Hörbranz. Would I find the way? What about the house – would I recognize it? Just down the street from the house was Germany. We bought ice cream at a little Imbiss kiosk next to the border post almost every day. In a Europe without borders, was it still there?

The lovely Grebers were our host family. Frau Greber was an excellent cook, making gourmet meals of fish fingers even. My favourite was her homemade yoghurt with cherries and peaches; mouth-watering even now. I’m not much of a foodie and often skip meals. On an everyday basis, having to stop what I’m doing to eat is more a hassle than anything. Yet frau Greber’s dishes I still remember, decades later.

Back in the 21st century, Bregenz has changed. It looks even nicer than I remember, with a long pedestrian street and cosy cafés I’m quite sure weren’t there then. Glancing over at Bodensee, that lovely lake looks just the same. Turning upwards, even the summer rain feels the same on my face. Suddenly, I spot a bus marked Hörbranz and jump on without thinking. I have no idea where to get off – just feeling my way along. The street where we lived was called Haldenweg, and so I ask the driver. He has never heard of it. Neither has anyone else on the bus. Somewhat dismayed, I sit down.

About 15 minutes later, I spontaneously jump off, seemingly in the middle of nowhere. Don’t know why, I don’t recognize a thing. Yet my feet lead me directly to the house – no dallying about. Amazing, the power of the sub-conscious. 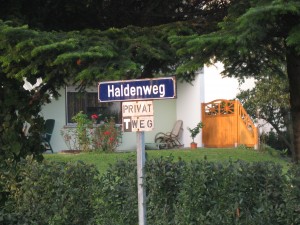 Haldenweg is a little cul-de-sac, just 5 or 6 houses; no wonder nobody knows it. From a distance, I observe “our” house. I notice the verandah where we had breakfast on sunny mornings. Meats, cheeses, marmalade and semmeln. Always semmeln. And always fresh. Every morning, frau Greber biked to the baker to get the wonderful hard-crusted rolls for her family’s breakfast.

I contemplate ringing the bell. But it doesn’t feel right. Too intrusive. The Grebers might not even live there anymore. Suddenly I feel self-conscious, silly even. I snap a few pictures and leave, instead walking down the narrow road to Germany.

Every day, when going to the Imbiss kiosk for ice cream, we’d bring our passports. Just in case we felt like getting ice cream on the German side instead. Back then, it was a real border. Today, it’s but a small jungle of signs, announcing Republik Österreich, Land Vorarlberg, Hörbranz, speed limits, various sights, hotels and, oddly Geldwechseln. That last one must be for nostalgic reasons; both Germany and Austria have used Euro as their common currency for almost 10 years, so there’s no longer a need for money changing.

On the German side, the signs tell me I’m now in Bundersrepublik Deutschland, by the river Leiblach and in Freistaat Bayern. (About 1600 years old, Bavaria is one of Europe’s oldest states, and has retained Free State of Bavaria as its formal name). You can border-hop as much as you like, no passport necessary. Now I’m in Austria, now in Germany, Austria, Germany, Austria, Germany … 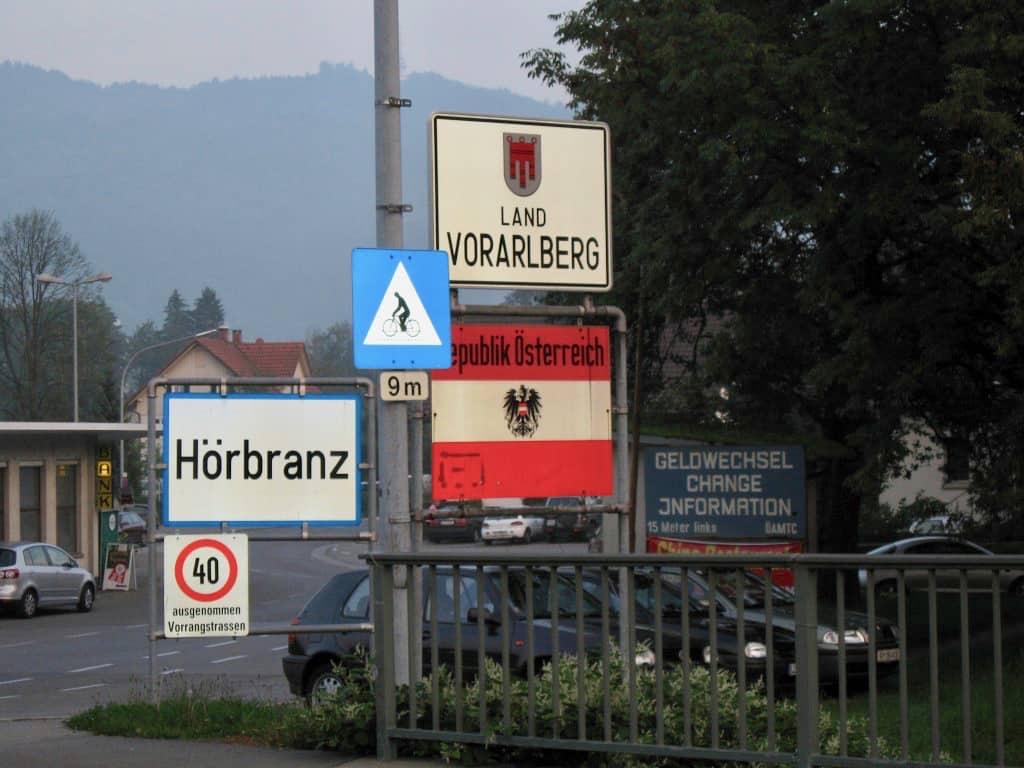 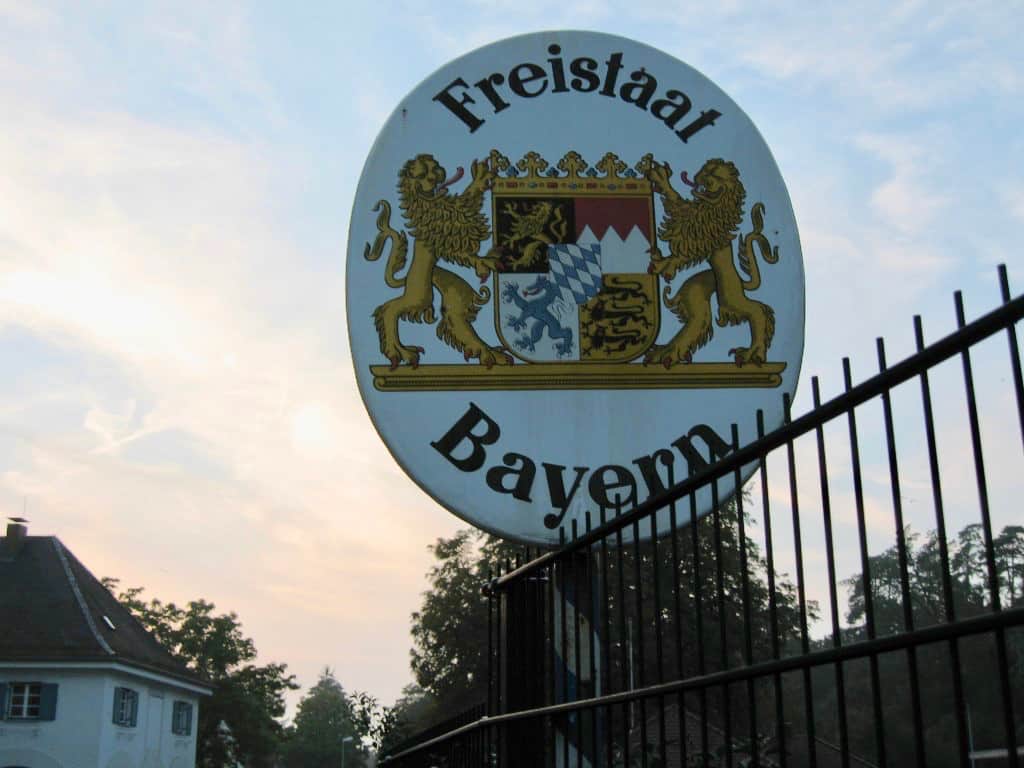 The kiosk is still there, looking decidedly decrepit. Or am I seeing it through adult, more judging eyes? I expect the state of repair of the ice cream kiosk would have gone largely unnoticed by my 15-year-old eyes.

This post is part of a Lonely Planet Travel Carnival, hosted by Natalia of No Beaten Path. The carnival is about going back – and Natalia asks us how going back made us feel. Nostalgic? Disappointed? Surprised? And just as for dreams, that is the interesting question, isn’t it?

As for me: Surprised? Indeed. And pleased my sub-conscious memory functions well. Disappointed? Not at all. Nostalgic? Yes; melancholic even. Yet in retrospect 15 was fun – but… been there, done that, moved on.

That said, I wouldn’t mind going back to Bregenz. I’ve yet to see the annual Bregenzer Festspiele. Watching performances on the Seebühne, the floating stage on the lake, sounds magical. And if it sounds familiar, part of the James Bond film Quantum of Solace was shot on the Seebühne, to the sounds of Tosca.

This carnival of reminiscences is now live here. Don’t miss it!