Thinking about visiting the Rhine Valley? There’s a long, winding river, delightful villages, cliffs with mythical maidens and more castles than anywhere else in the world. And that’s just a few Rhine Valley highlights. 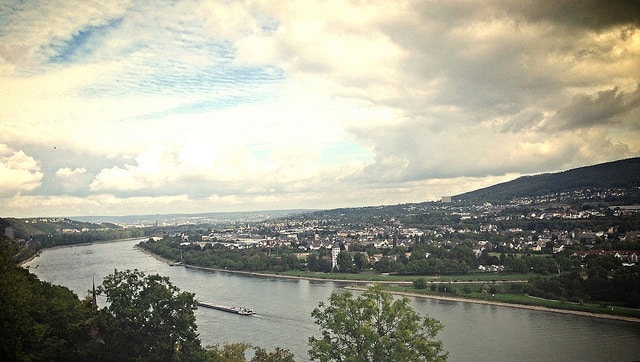 You can take a hotel boat, aka river cruise ship, up (or down) the river. Or you can rent a car and be free to stop when and where you want. Ferries cross the river between 0630 and 2100. Most crossings take about 5 minutes, run frequently (every 10 minutes or so), and cost EUR 4.5 one way.

Having emerged from the past, I’ve now travelled from 47 million years BC, made a quick stop in Roman times, and now find myself in the present here in the Rhine Valley. My first stop is Bingen. Bingen is just across the river from Rüdesheim, famous port of call for the many cruise ships that ply the Rhine. (Tip: Bingen is just as interesting and much less busy.) I spend a pleasant evening here and would have liked to stay a bit longer. Does the name Bingen ring a bell? It did for me, though at first I couldn’t think why. But then it dawned on me. Hildegard, of course, the 12th century renaissance woman. She was a composer, scientist, herbalist, mystic, philosopher, writer – in short, a polymath much like Leonardo. Why she isn’t as famous, is anybody’s guess… (a penny for your thoughts on this, dear reader). To me, Hildegard is first and foremost the composer of beautiful Gregorian chants. To locals, she is best known as an herbalist. In Bingen, there’s a Hildegard Association and the Hildegard von Bingen Herb Garden. Restaurants serve Hildegard salads.

Where to sleep and eat in Bingen

In Bingen, I stayed at NH Hoteles Bingen. The hotel is located on the shore near the promenade. The rooms are comfortable and the river views are wonderful. I’ve tried this Spanish chain a couple of times before – in Genoa and in Girona, and I’ve always enjoyed my stays. There are several restaurants along Bingen’s riverside promenade, including a Latin American one which sounded lively. I had dinner at Zollamt, the old Customs building. Zollamt is famous for steaks, so if meat’s your thing, this is the place for you: on the menu are steaks from the UK, Ireland, the USA, Australia, Japan and of course Germany. If you’re a vegetarian, no problem, Zollamt caters to the veggie crowd as well.

The next morning, I head north, towards Oberwesel. It should have taken 25 – 30 minutes, but somehow, I end up crossing the river. Twice. I blame the fickle SatNav. In Oberwesel, I wander through the Gothic Church of Our Lady, and I walk along the top of the ancient town wall in the rain. 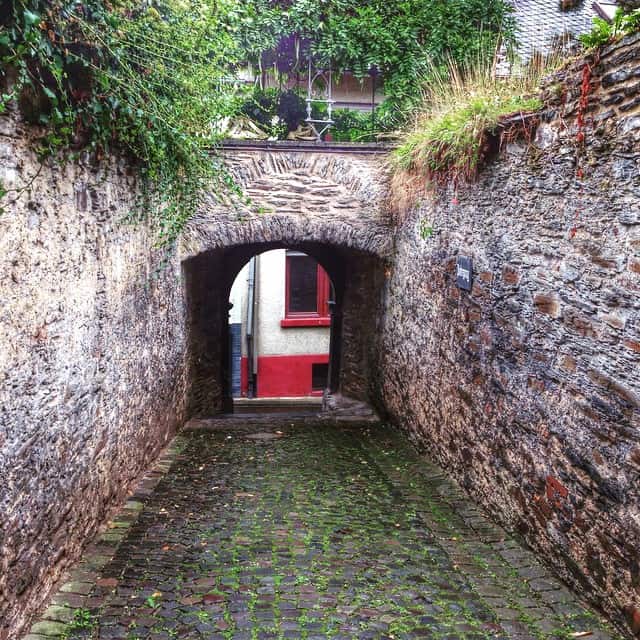 Every second year during Whitsuntide (known as Pentecost in the USA, if I remember correctly), Oberwesel celebrates a medieval weekend fair. Unusually, this medieval fair involves the whole village. It takes place not at a fair ground or field on the outskirts of town, but inside the old town walls. Most everyone dresses up. No one’s allowed to wear watches, and certainly no mobile phones or other mod cons (allowance is made for glasses.) Electricity is turned off in the streets and in public areas, and for a few days the town is lit solely with candles. I’d love to visit Oberwesel during this fair. 2016 is next.

Continuing along the left bank, I see the famous Loreley cliff. At the Weincafe an der Loreley, I sit with a piece of cherry cake and a coffee and stare at the cliff for ages, thinking of my mum, who used to sing Heinrich Heine’s lovely song for me when I was little. 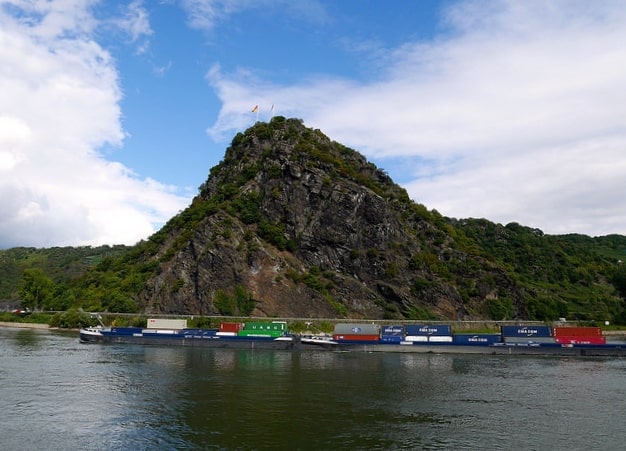 Just at the bend underneath the Loreley cliff, the river is particularly narrow. Many ships have run aground here. Legend has it, pilots of the Rhine River boats were distracted by a lovely damsel who sat atop the cliff and combed her blonde tresses, thus luring them aground. Locals from nearby St. Goar then plundered the shipwrecked boats. The song is haunting; it transports me back to childhood. However, the proprietor of the Weincafe thinks otherwise. ‘Every day, I hear this song 15 – 20 times,’ he says, ‘from every one of the many cruise ships floating past.’

Continuing northwards, I come to the sweet little town of Boppard, with its Roman ruins and its long and fascinating history. Archaeologists have unearthed evidence of settlements here as far back as 13000 years. Fits right in with my time-travelling project it does. 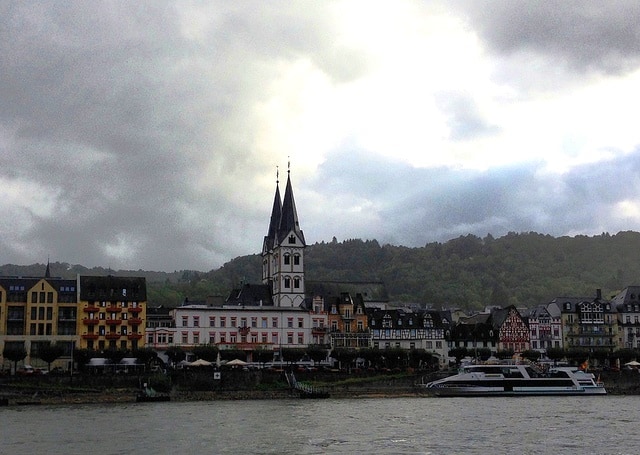 Where to sleep and eat in Boppard

In Boppard, I stayed at Pension Bei Schinderhannes & Julchen. Bit of a mouthful, but it’s a fun little family-owned inn, doubling as a pub. The owners often sit down with the guests and chat over a glass of wine, and the daughter even lent me her parking place for the night (parking can be a bit tricky otherwise).

The inn is named after Schinderhannes (Leather Johannes), an infamous 18th century outlaw. Hannes trained as a tanner, but his job description included armed robbery, breaking and entering, and horse theft. Most of the time, Hannes and his girlfriend Julchen operated as a regular Bonnie & Clyde. In 1803, 25 years old, he was sentenced to death and guillotined in front of 40000 witnesses. Watching executions must have been a popular spectator sport here as well, then. In films and plays, Schinderhannes is frequently portrayed as a heroic Robin Hood character. There’s something inherently romantic about dying young and under dramatic circumstances, it seems. 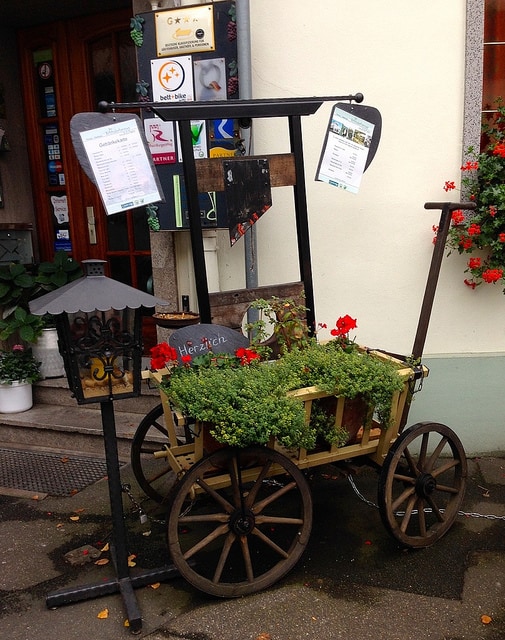 Appropriately, I’m welcomed to the pension with a guillotine. Passing through the lively pub, I reach a stairway. Next to it is a huge bowl of wine gum bears, just in case I needed some fortification of the non-liquid variety before heading up the stairs.

The rooms are simple but perfectly adequate. My favourite feature here, though, is the large communal breakfast table where the plates are set with a little chocolate. Nice touch. The breakfast buffet is practically a banquet, with anything I could possibly want, and the room is decorated with historic photos and artefacts. Lots to look at. 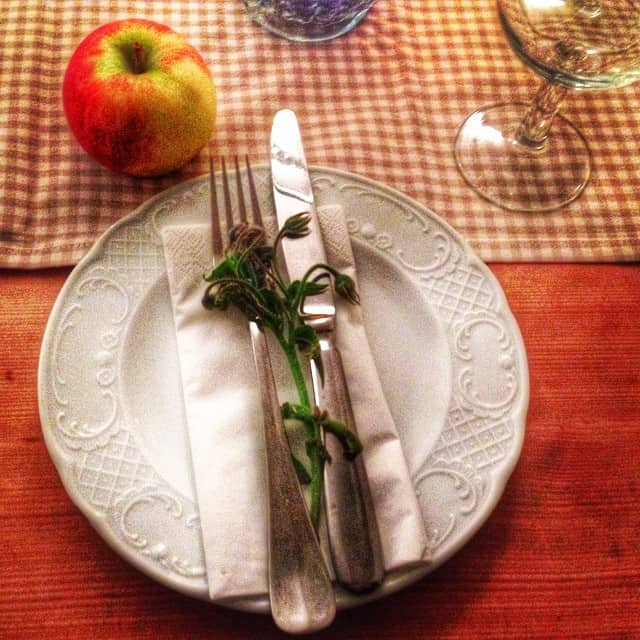 As in Bingen, you’ll find plenty of restaurants and cafes along the river front. I had dinner at the historic Karmeliterhof, where the menu was handwritten, the food was simple and delicious (Germans do that so well, don’t they) and the service very friendly. 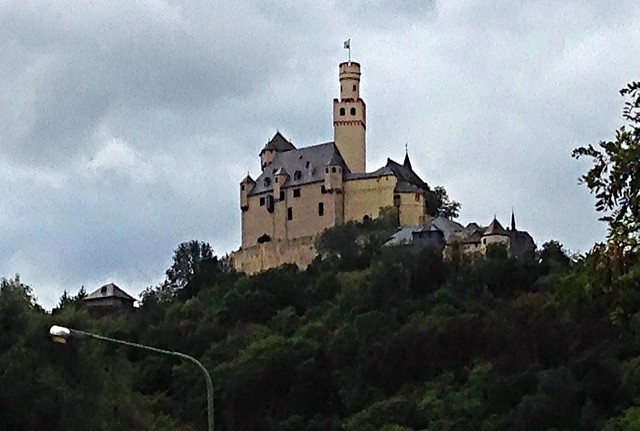 This stretch of the Rhine is home to more than 60 castles. I visited two – Marksburg on the hill above Braubach and Stolzenfels in Koblenz – and happily recommend both. Marksburg, because it’s the only hilltop castle in this area that has never been destroyed, and Stolzenfells because, well, because it’s awesome. I could live there for a while. Both have magnificent views of the valley. Marksburg is exciting in a dark, foreboding sort of way (there’s a torture chamber n’all), while Stolzenfels belongs in a nearer past, with more light and air. 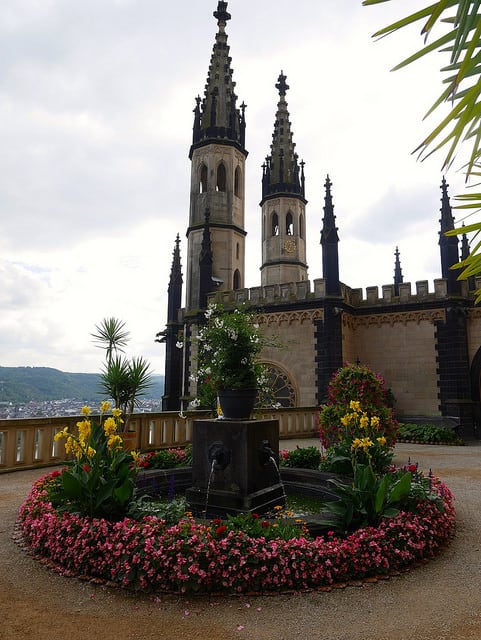 Have you seen any of these Rhine Valley highlights? Would you like to live in a castle?

Disclosure: On this journey through German history, I was a guest of UNESCO Germany and the German National Tourist Organisation. Of course, anything I write is entirely up to me. Goes without saying, really. Pop over to Travel Photo Thursday for more photo fun.