Here I go again, starting one thing and ending up with quite another. Working on a blog post about China’s Grand Canal, I begin thinking about other canals I’ve been on. Or along. Or above, or beside. There are quite a few. At the same time, I’m noticing that my coverage of these cool man-made structures has been so-so.

In the land of canals, I’ve briefly mentioned the Canal Ring of Amsterdam and Rotterdam, as well as a bit more thorough coverage of Kinderdijk and whimsical little Giethorn. Across the border in Belgium, I’ve covered Brügge, and across another border in Germany, Hamburg’s Speicherstadt and the clever water management system of Augsburg. Further south, there’s of course la bella Venezia, the mother city of canals. Across the channel, I’ve talked about marvellous Manchester, and across the ocean, I’ve covered our crossing of the Panama Canal. That’s about it for canals on Sophie’s World.

Hm… looking at it now, maybe it hasn’t been so bad, after all. But there are some remaining. I’ve hung about parks and bridges along and across the aforementioned one in China. I’ve driven alongside the Suez Canal in Egypt, and not said a word about it. I’ve biked and hiked along the Canal du Midi near Carcassonne, as well as the Canal du Centre in Hainaut in Belgium. Not so much as a mention in passing.

Then there’s the Rideau Canal. Thinking about that now, I’m reminded of a time when we had annual excursions to Canada’s delightful capital, three happy summers in a row.

Rideau it is, then. Grand Canal will have to wait. 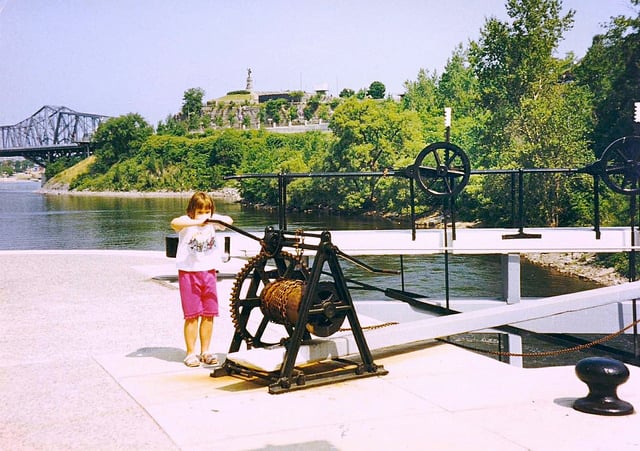 After that long-winded (and possibly unnecessary) introduction, here is a look at Ottawa’s cool canal – and a photo of Ali operating a lock. Sort of. We’re back at the end of the last century here. That little kid now has little kids of her own. Cycle of life.

Rideau Canal: protected for the future

Like some of the others I mentioned above, Rideau Canal is a World Heritage site. Here’s UNESCO’s reasoning:

The Rideau Canal, a monumental early 19th-century construction covering 202 km of the Rideau and Cataraqui rivers from Ottawa south to Kingston Harbour on Lake Ontario, was built primarily for strategic military purposes at a time when Great Britain and the United States vied for control of the region. The site, one of the first canals to be designed specifically for steam-powered vessels, also features an ensemble of fortifications. It is the best-preserved example of a slackwater canal in North America, demonstrating the use of this European technology on a large scale. It is the only canal dating from the great North American canal-building era of the early 19th century to remain operational along its original line with most of its structures intact.

Finished in 1832, this is the oldest canal-system in North America in continuous operation, constructed for the military at first, then open for commercial use. As we’re gliding along, the traffic seems to comprise mainly pleasure boats these days. And why not; it’s a nice, relaxing day on the water, occasionally interrupted by a quick hop ashore to work the locks, such interesting works of engineering. 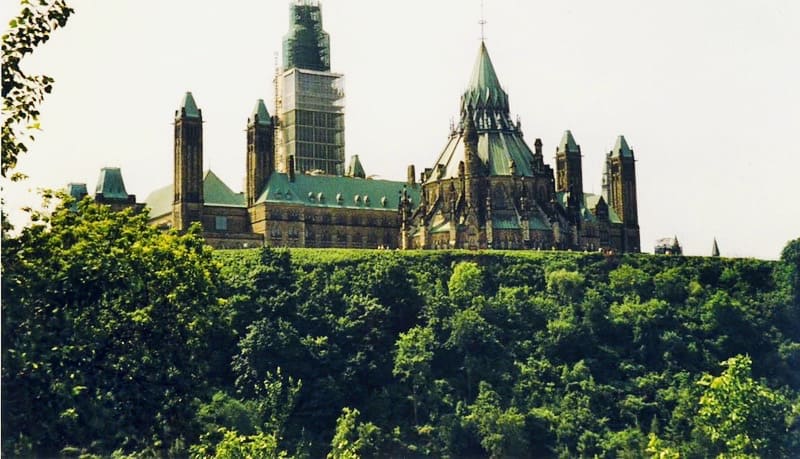 Here in Ottawa, the landscape along the canal is lovely, framed as it is by tree-lined walkways, connected by several bridges. The picturesque Parliament Hill is on one side and other majestic churches and buildings on the other; it’s a lively, bustling area. The canal goes almost all the way to the airport, giving you nice views when landing and taking-off. Canada’s capital is an all-round pleasant experience, coming, staying and going.

I imagine it’s equally pleasant in winter, when the canal becomes the Rideau Canal Skateway, nearly 8 km of skating fun – and just like in the Netherlands, people skate to work or school.

Nearby, the 103-year-old Bytown Museum showcases the history of the canal and of Bytown (the old name for Ottawa).