What is hiding behind this rather worried-looking face? 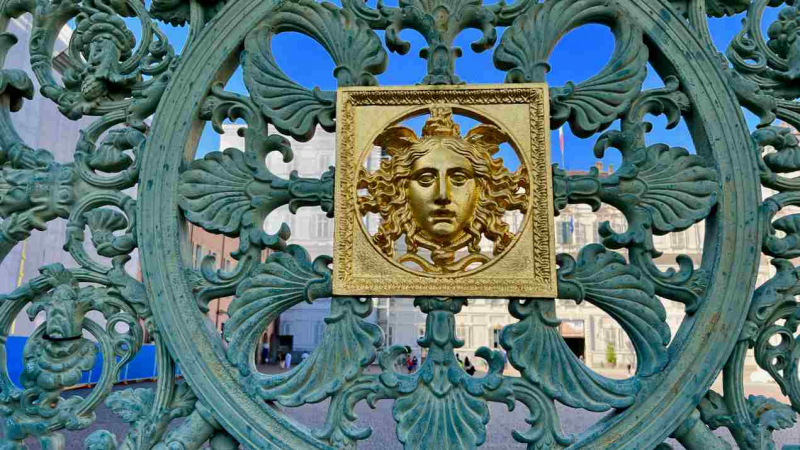 This palace, that is what:

Turns out my temp flat in Turin has balcony views of main square Piazza Castello, and the palazzo. Score! (Yet again.)

Back when Italy was not yet Italy, there were monarchs. And I do not mean mild constitutional ones like today, but absolute monarchs. With absolute power. In 1562, then ruler Emmanuel-Philibert of Savoy decided to move his capital to Turin. He built 22 Baroque palaces, villas, maisons de plaisance (delightful name, no?), hunting lodges and whatnot.

11 of them are in Turin proper, with the Palazzo Reale as Savoy HQ. A new creamy white building for a new capital. Another 11 buildings radiates out from the city and into the surrounding Piemonte countryside. Way to show who’s boss. 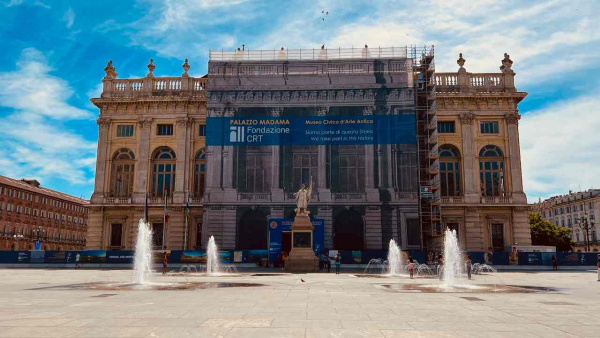 Palazzo Madama, another of the 11, also on Piazza Castello

If these two palaces on Turin’s main square are anything to go by – and it is not unreasonable to assume they are – Emmanuel-Philibert is responsible for some pretty decent construction work.

Who were the Savoy? Casa Savoia started off small (well, relatively) in 1003, then through the centuries expanded all the way down to Sicily. By the time the Risorgimento came around – when the various kingdoms, dukedoms and the like unified to create the current country of Italy – Turin became the first capital.

Some claim the Savoy were responsible for much of the unifying, as they controlled most of the Italian peninsula. After unification, the family continued their total rule, until the Italian Republic was declared in 1946. A millennium of reign.

Let’s go through the courtyard – 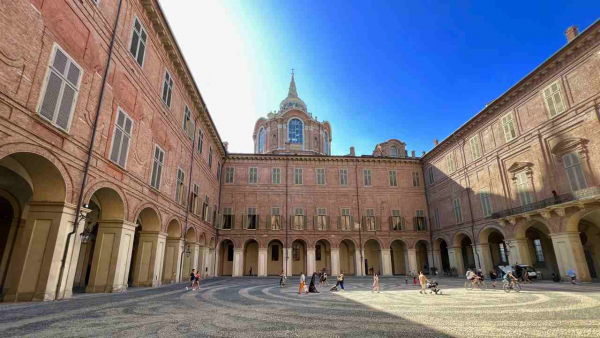 – and enter the palazzo.

My favourite feature are the colours. Delicious deep jewel colours. The Palazzo Reale is a beautiful vision in red, green and gold. Want a look?

Welcome to my imaginary dinner party in the palazzo. I’ll let the stories tell the, erm, story.

(PS: There will be unicorns! Wheeee!) 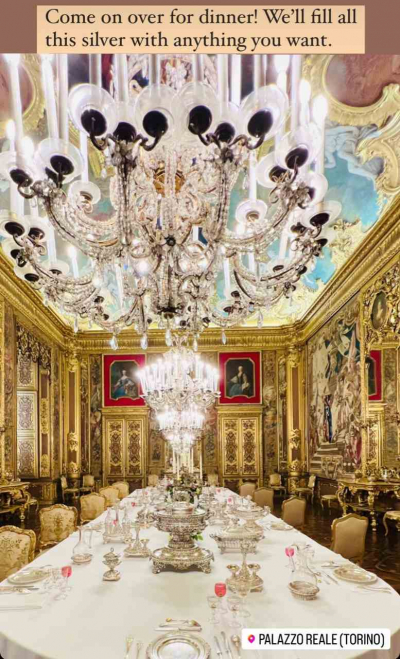 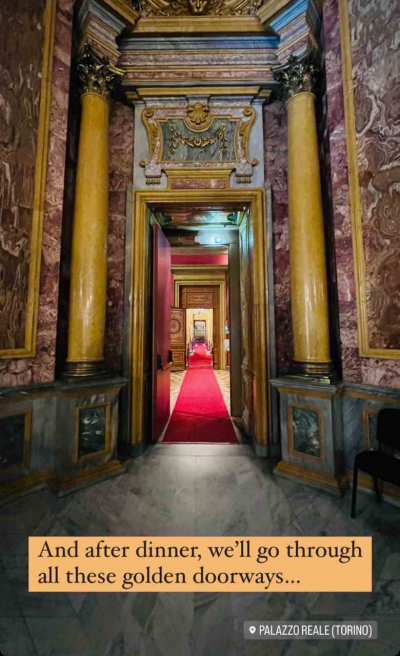 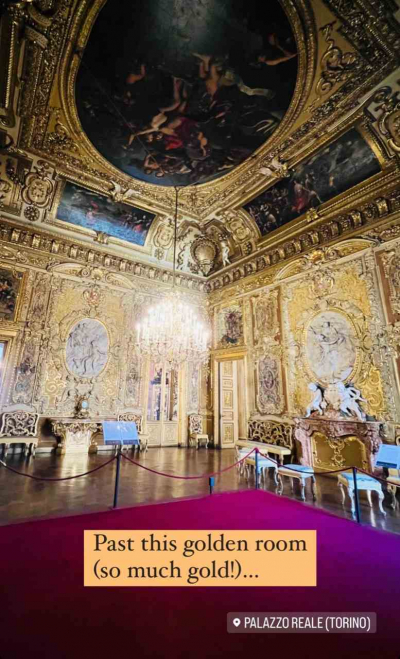 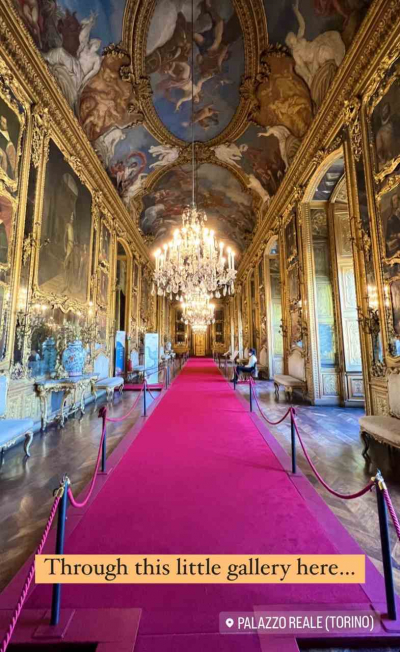 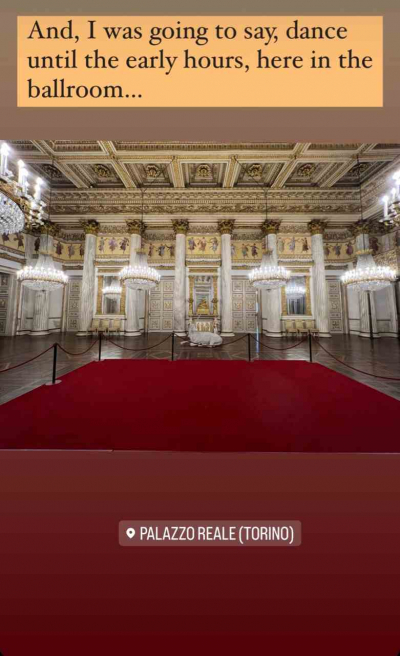 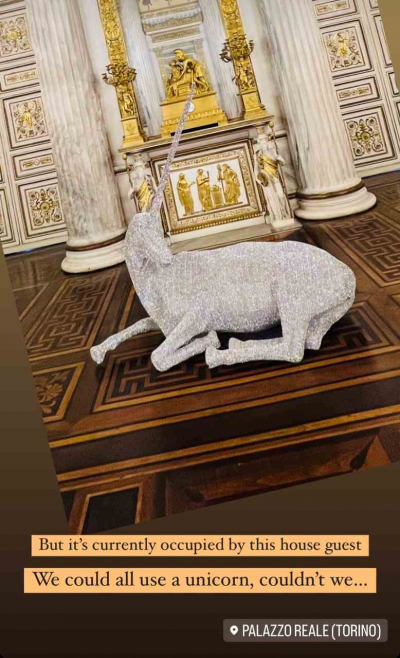 Now, let’s get up close with that beautiful vision I mentioned. Wandering through the palace, I decide this, this is my favourite room. Just to change my mind in the next room. And then the next. And the next… They are simply all fabulous! 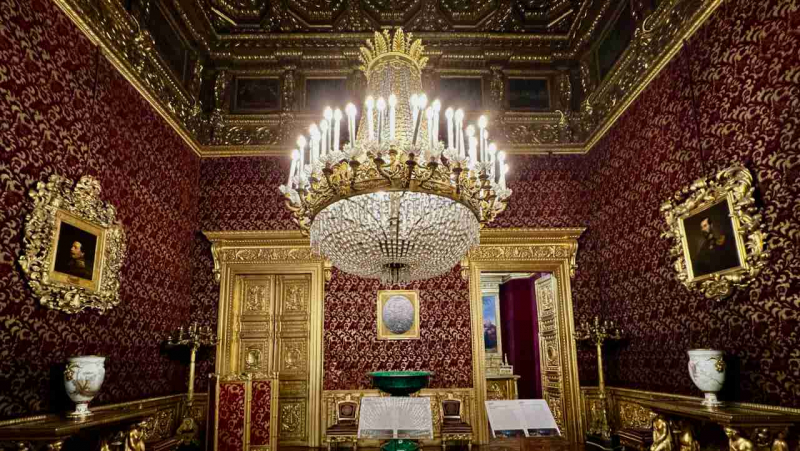 The Private Audience Room reminds me a bit of Hawk Club in my hometown, where we used to sneak in during my underage teen years. Sometimes the doorman was fooled by our amateurish fake IDs, but most often not. But no prob. There was a window at the back, always open. To air out a fraction of all the ciggy smoke, no doubt – but also handy for climbing through. (Ah, memories!) The wall paper at Hawk Club looked a bit like this, all red and gold velvet. A touch of 1920s brothel, you could say.

We will have to assume the King’s Private Audience Room was used for higher purposes, as there was a chapel here. The two porcelain vases on the side consoles were a gift from Napoleon to the first king of Italy. 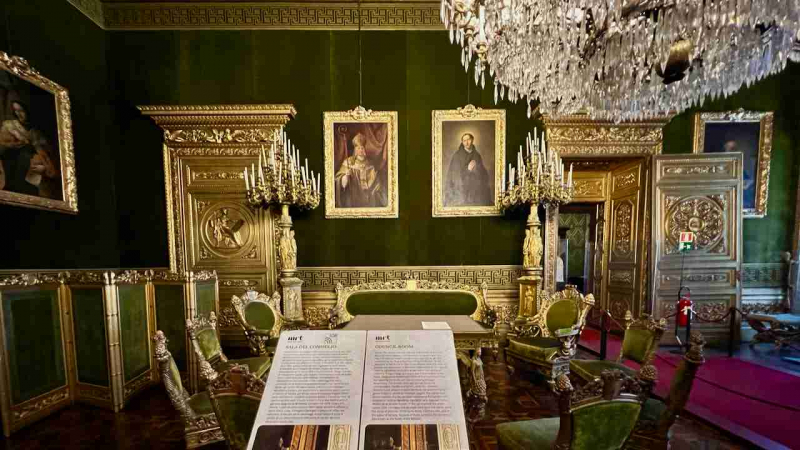 Here in the Council Room, I feel as if I’m in a pine forest, dotted with specks of golden sunshine. I want a room in this exact shade of gorgeous green. I’m thinking maybe a bedroom… then I read the sign saying it was in fact a lady’s bed chamber, originally. Carlo Alberto, King of Sardinia and Duke of Savoy, turned it into a power room when he took over the throne in 1831. This is where he presided over his Council of Ministers. 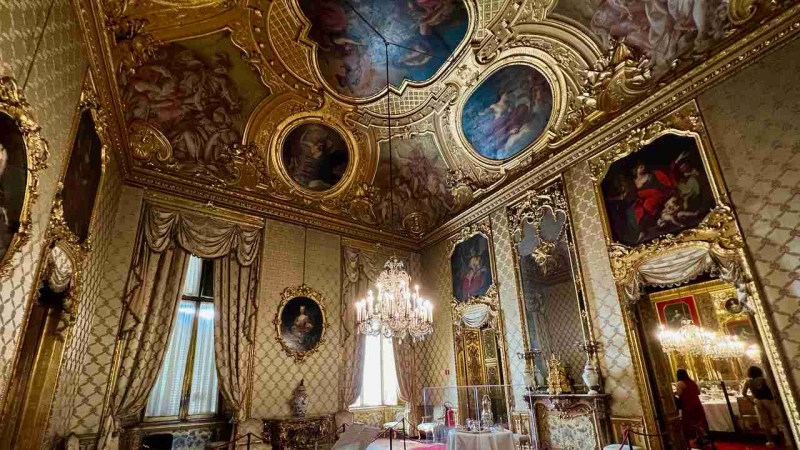 The Coffee Room was also the Smoking Room in the 19th century. Men only. 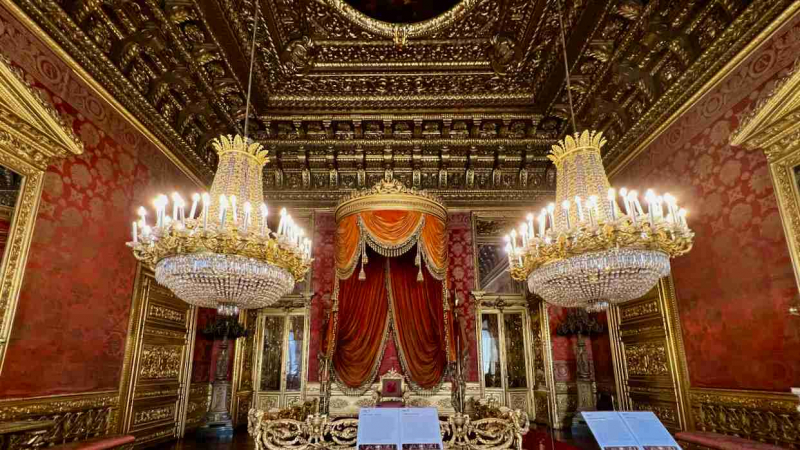 Speaking of thrones, this delight in shades of red, is the throne room – first for a queen, later for the King. That Carlo Alberto again. If you look closely at the wall paper, you’ll see his monogram all over the place. CA, CA, CA… Full of himself, that one. 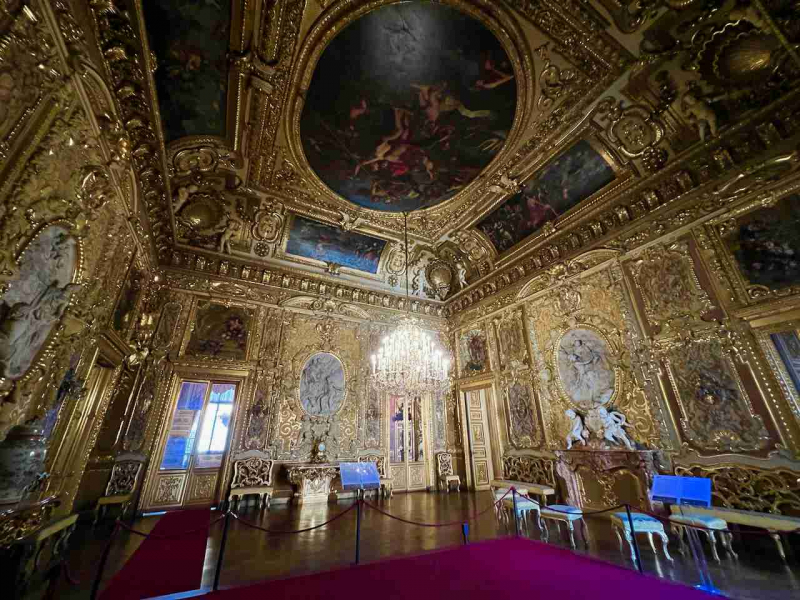 Carlo Alberto turned the Medallion Room into a throne room for his wife, Maria-Theresa. Later, Queen Margherita (of pizza fame) added the neo-baroque medallions on the walls, just because. 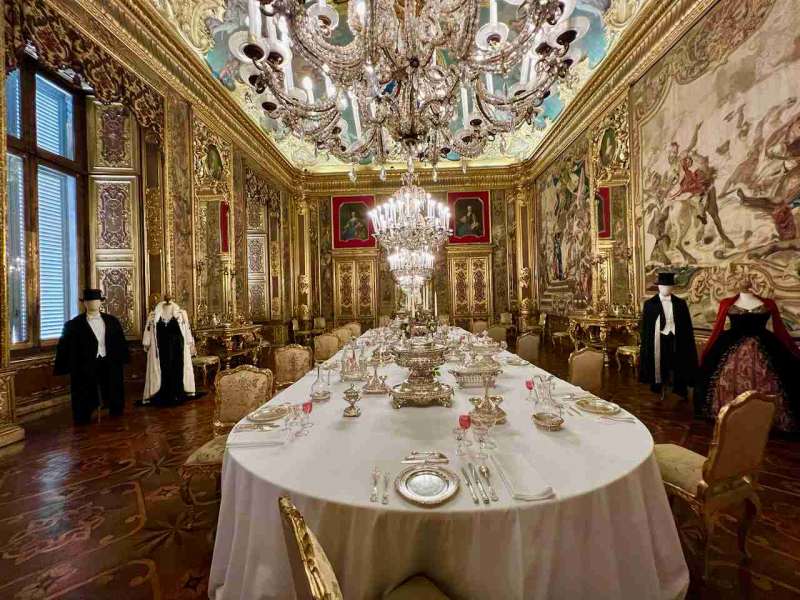 And even more gold 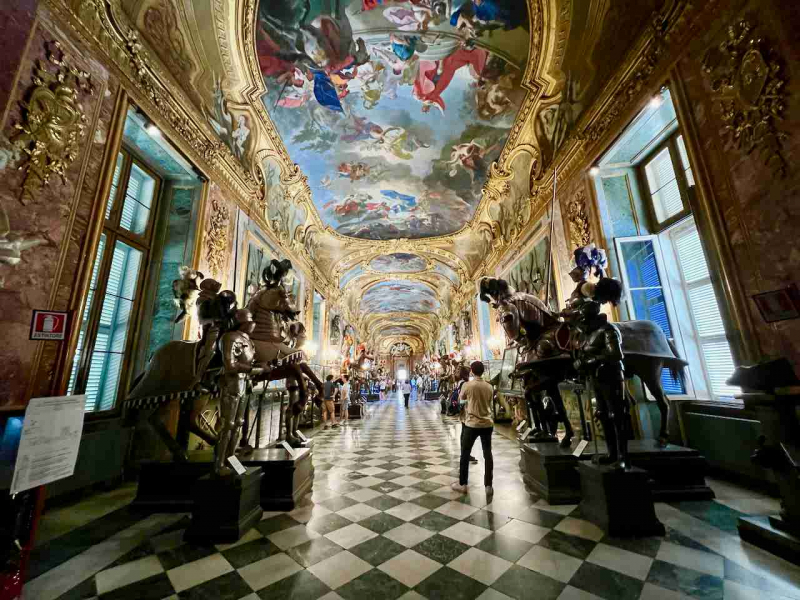 No, I haven’t forgotten the armoury. Weapons have never impressed me, but the armoury is probably the most famous part of Palazzo Reale, so I reckon you’ll want a peek. And to be fair, it is a beautiful room. 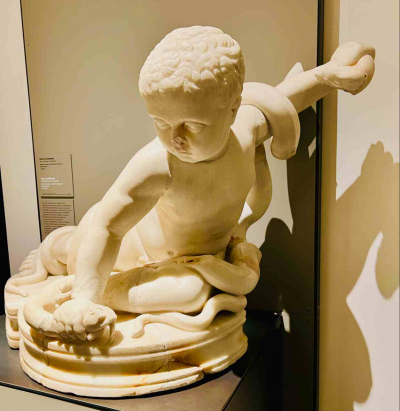 In Palazzo Reale you’ll also find a royal library, Biblioteca Reale – and the Museo Archeologico. I couldn’t resist this marble sculpture from the 2nd century CE in the archaeological museum. Hercules. A mere babe, but strangling  a serpent nonetheless. No wonder he is immortal.

There are Royal Gardens, of course, Giardini Reali – and Galleria Sabauda, an art museum featuring Dutch, Flemish and Italian Renaissance masters. There is the Holy Shroud Gallery, decorated with serpents, dragons, chimeras… if you ever wondered about fantastic beasts and where to find them. 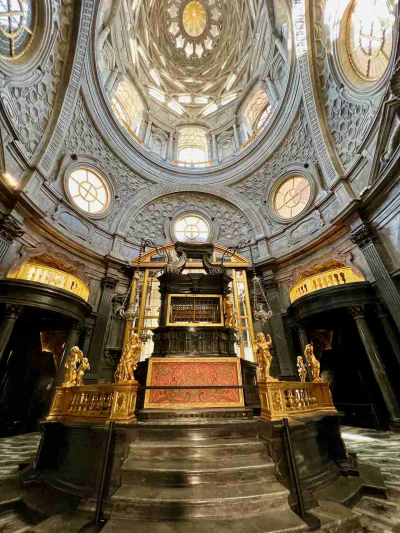 The Holy Shroud Chapel is home of the legendary – and disputed – Shroud of Turin, a linen cloth that looks like a face is imprinted on it. Was this the cloth Jesus’ dead body was wrapped in?

It was denounced as a fake already in the late 1300s, and more recently, carbon dating concludes the cloth was produced in the 13th – 14th century. But the Catholic Church seems reluctant to agree. 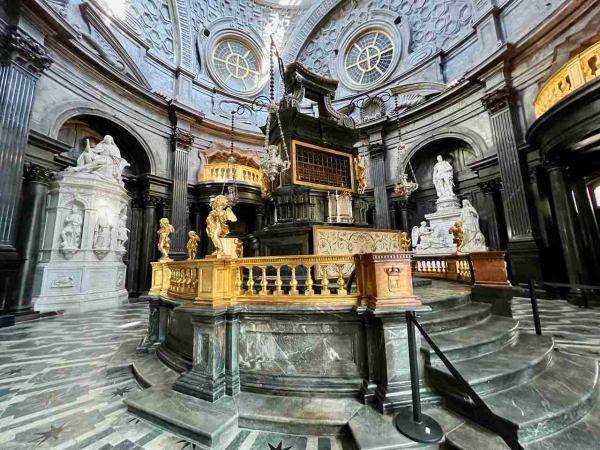 Is this where Jesus’ grave cloth is? Enquiring minds want to know.

Red AND gold. And a little blue. 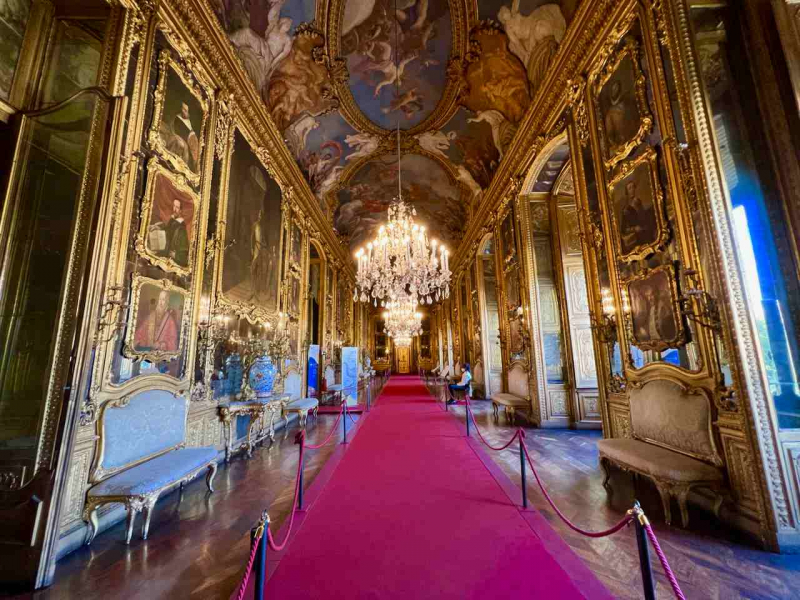 Back in the world of colour and more beautiful rooms, in the Daniel Gallery, the mirrors and windows takes me on an imaginary detour to the Hall of Mirrors at Versailles. I love the light blue sofas, reflecting the sky in the ceiling. Something peaceful about the soft blue amidst all the opulent reds, greens and golds. 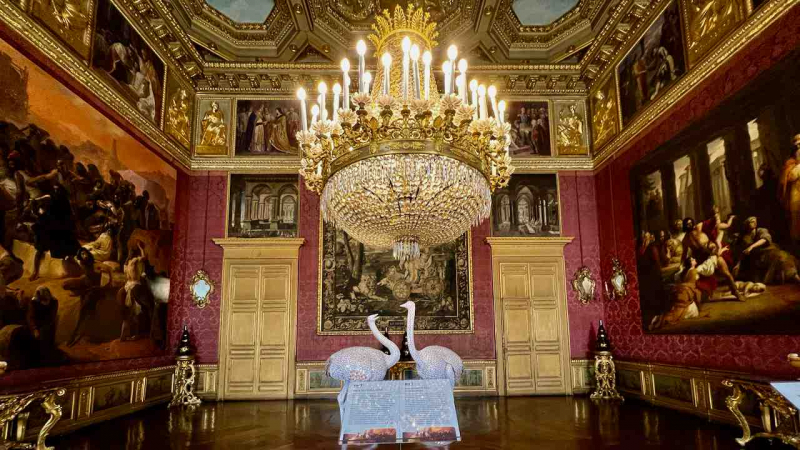 Just one more, then. Mostly for those ostriches. The Chamber of the Cuirassiers  (Odd word, isn’t it, cuirassiers. I had to look it up. It means cavalry. Mounties. You’re welcome.)

The ostriches above, as well as the unicorn and some rather endearing meerkats spread around, are part of a temporary modern art exhibit, Animali a Corte (Animals at the Court). 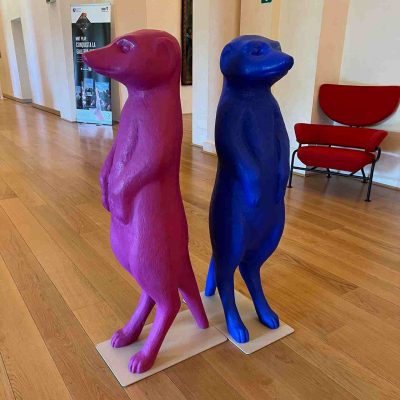 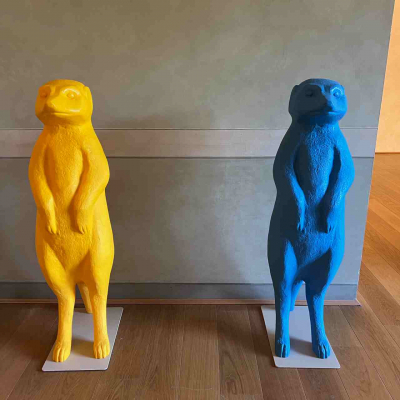 Contemporary art in an ancient setting

My favourite court animal, though, is the magical silver unicorn taking up space in the neo-classical ballroom.

If you are in Turin, and want to have your mind blown, make sure you visit this Baroque frenzy of a palace.

Residences of the Royal House of Savoy is a UNESCO World Heritage site.