I’m noticing I haven’t written nearly enough about wine here on the blog. Scandalous really, considering the total yum! We’ve covered the vines of Switzerland’s Lavaux, (surprised Switzerland is wine-growing country? I was.) We’ve briefly touched upon the yummy wines of Lebanon’s Bekaa Valley. We’ve talked a bit about Italian wines, such as Bubbles from the Abyss – the peculiar Ligurian habit of aging sparkling wine in metal boxes on the ocean floor, Sciacchetrà – the meditation wine from Cinque Terre, and the delicious Vernaccia di San Gimignano. Most of all, though, I hope I have inspired you to try Lacrima, the Crying Grape of Le Marche. 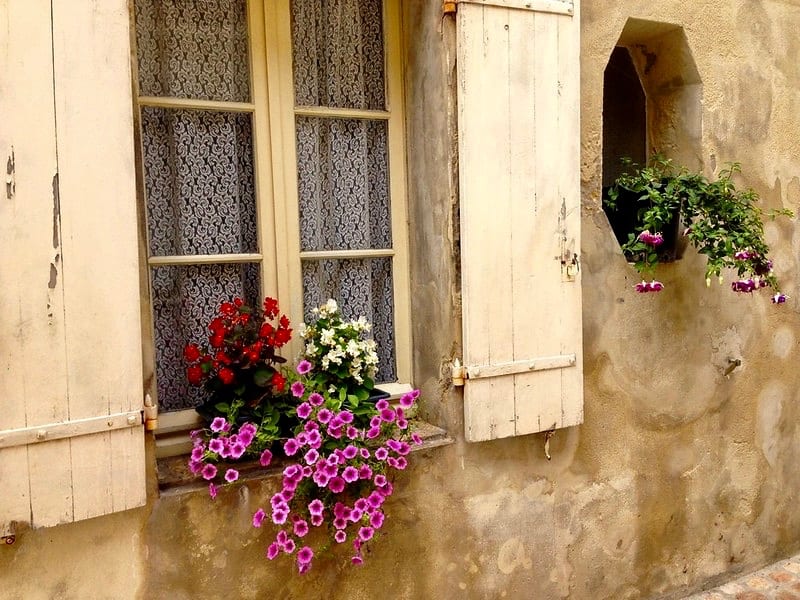 But what about France? The original wine country, some would say. That’s sadly missing here on Sophie’s World. To remedy that, I’ll take you along on a little journey to Aquitaine (isn’t that a fabulous name?), to my fave French wine district: Saint-Émilion.

The absurdly pretty village of Saint-Emilion on a hot July morning.

When the kids and I hung out in Bordeaux in the very hot summer of 2015, I had a long priorities list. In addition to practically every corner of Bordeaux itself, it included Vauban’s intriguing forts, and the mysterious cave art in the Vézère Valley. Top of the list, though, was Saint-Émilion, partly because of that delicious ruby liquid, and partly because I had read an intriguing crime story set amongst the vines here. Poor kids, they really didn’t have much downtime there. 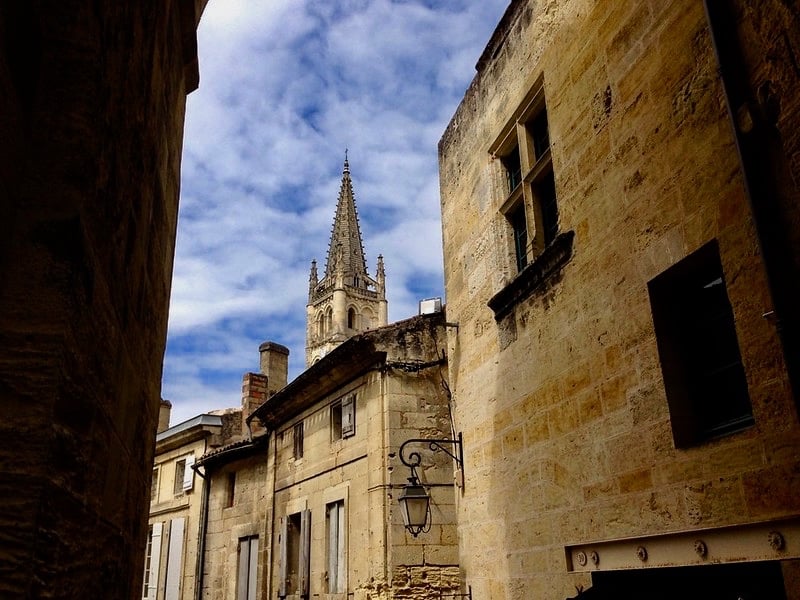 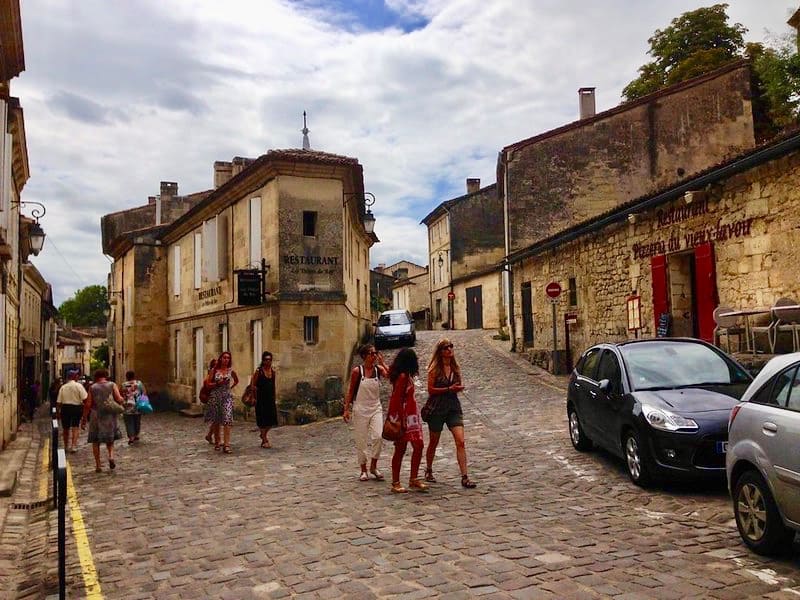 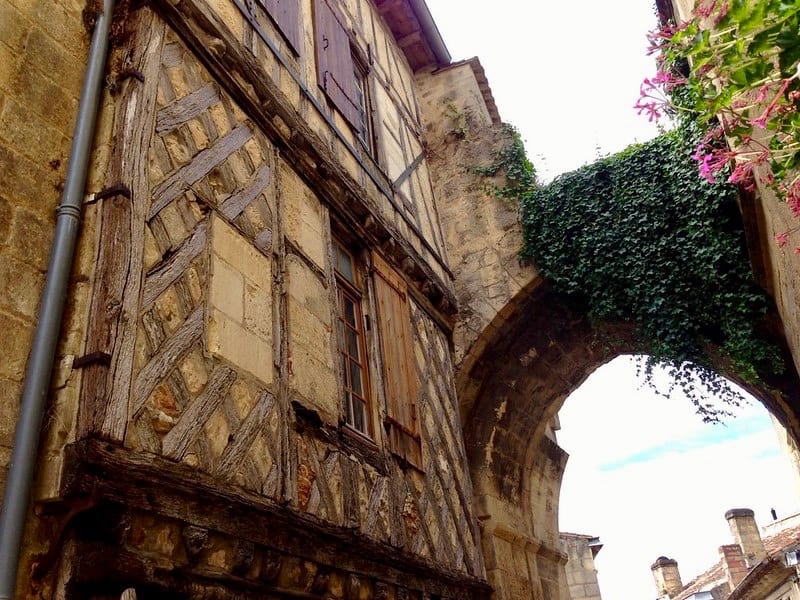 Here’s Cat celebrating her birthday at one of the many cosy little squares in Saint-Émilion. No wine, it was her 14th, after all. But the Croque Monsieur was tasty.

Just like in Lavaux by the banks of Lake Geneva, viticulture (that’s a fancy word for wine growing) in Saint-Émilion has been around for at least 2000 years. In fact, everywhere the Romans turned, they seem to have left vines. Very considerate of them. 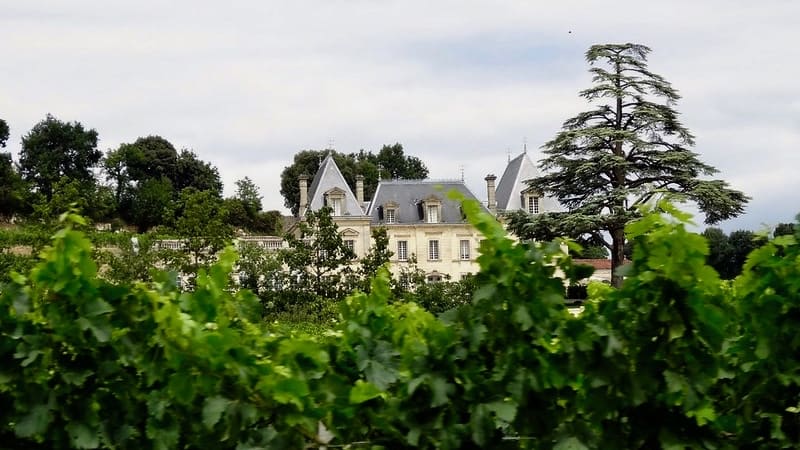 Saint-Émilion is on the pilgrimage route to Santiago de Compostela, which meant thriving business for the little town. You’ll find churches and monasteries from medieval times – and vineyards. Vineyards as far as the eye can see. Complete with opulent chateâux.

But who is this sainted Émilion, you ask? Well, maybe you don’t. But I’ll tell you anyway.

In ancient times, the area was known as Ascumbas. Skipping to the mid-700s, along came Émilion from Brittany, travelling confessor, monk and all-round miracle worker. He decided to dedicate himself to prayer, and settle into a life as a hermit, living in a cave. The simple life.

It almost goes without saying that such a character will attract a following – disciples if you will – and Émilion was no exception. He preached the gospel to the good folks around here and started a cult.

Émilion lived in his little cave for 17 years, and died ca. 767. His worshippers named the area after him, and the town was built around the cave. The disciples (monks) began wine production on the fertile land. Let’s take a moment to appreciate them. 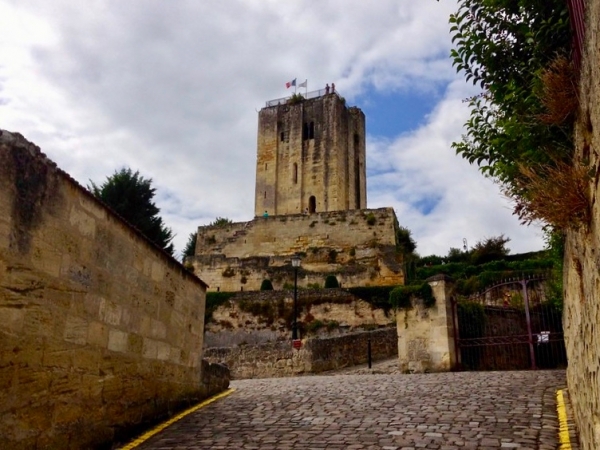 The cave, L’Ermitage de Saint-Émilion, is one of the major landmarks in this pretty town. You can visit the cave with a guide. While there, don’t miss the fertility chair; rumour has it, it’s very effective. Miracle grotto indeed. Sadly, no photography allowed in the cave.

Another major landmark is the 12th century Monolithic Church. Like the churches in Lalibela in Ethiopia, this one is also hewn from a single rock, in the ground. That’s right: most of the church is underground. It’s also the largest of its kind in Europe, which you get a feel for once inside. There, you’ll also see some seriously stunning murals. (Sorry, no photos allowed in here either). This is one church where the word awesome is exactly right. 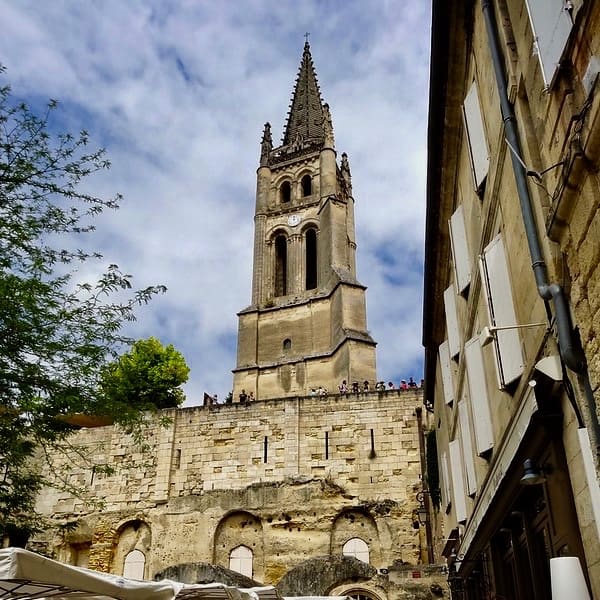 In town, almost every one of the hilly cobble-stoned lanes (Saint-Émilion is located on two hills) and every beautiful stone building seem to house a café, a restaurant, a wine bar, or a wine shop, sometimes all. Business thrives here still, it looks.

Sadly, I was driving, so couldn’t taste the yummy flowing delectables. However, we did try the town’s other claim to fame, macarons. Wine and macarons: what’s not to love … 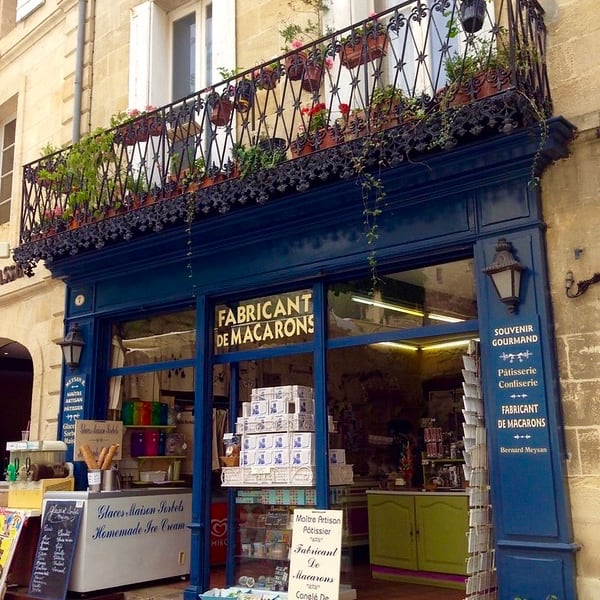 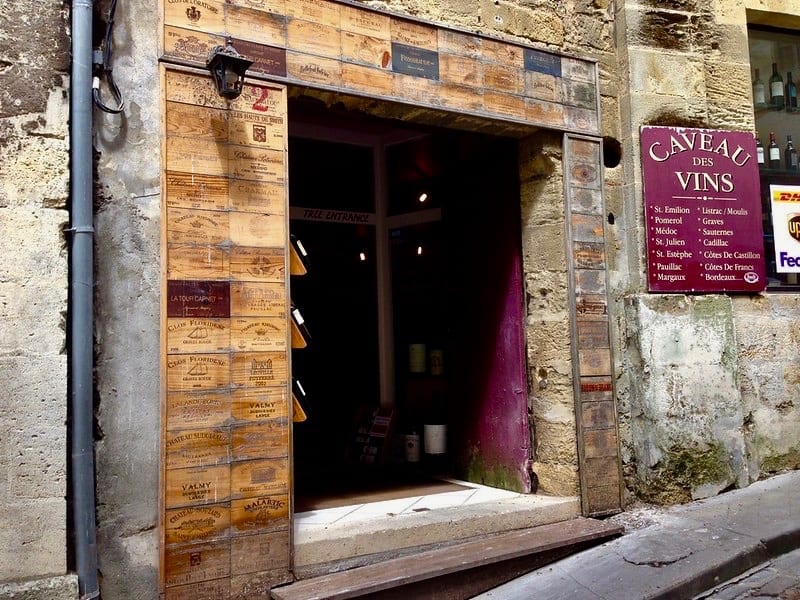 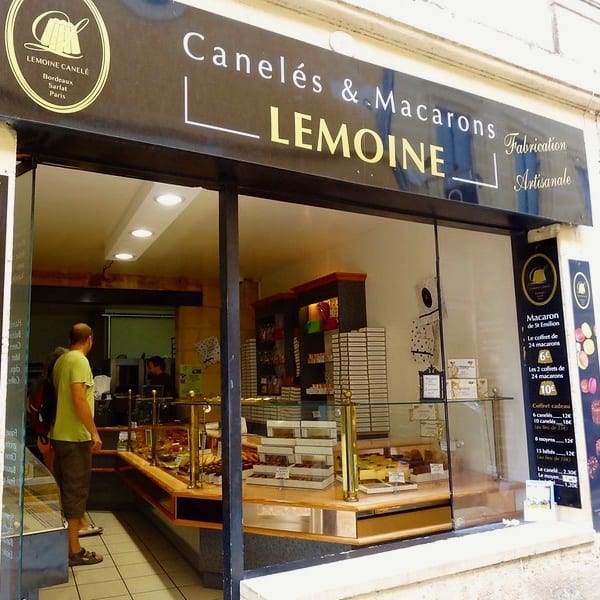 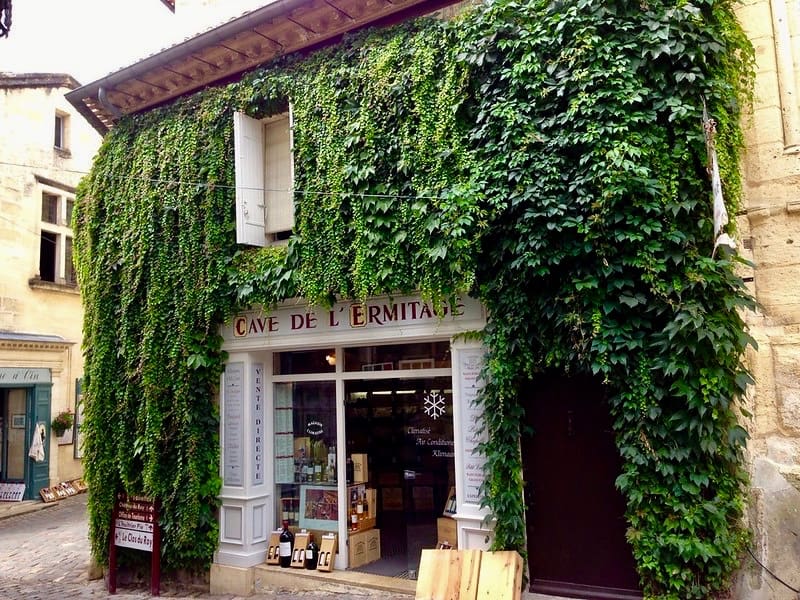 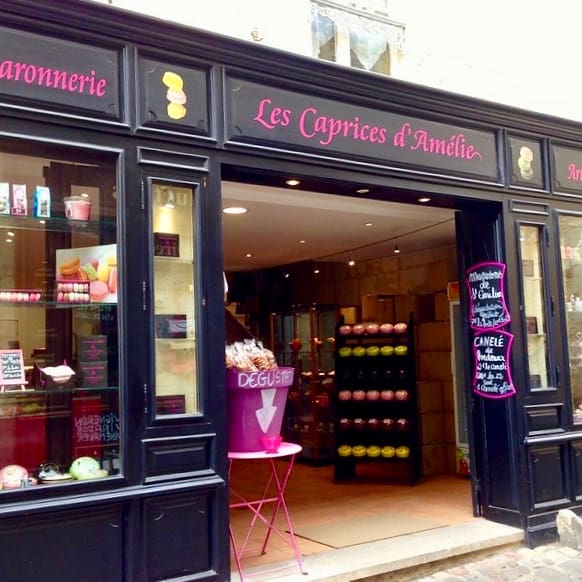 We drove around the vineyards, until that got dull for the birthday girl. And it was her day, after all. 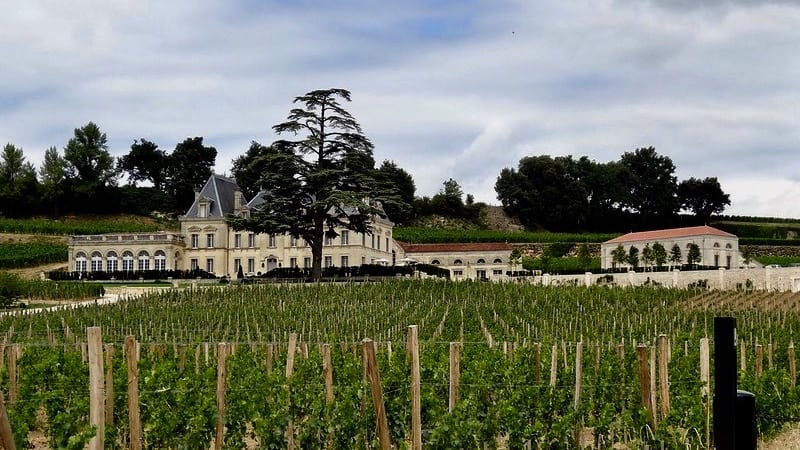 Next time, I wouldn’t mind spending the night, as I expect the atmosphere is rather different after the day-trippers have left. And also, actually taste the good stuff in its own backyard. 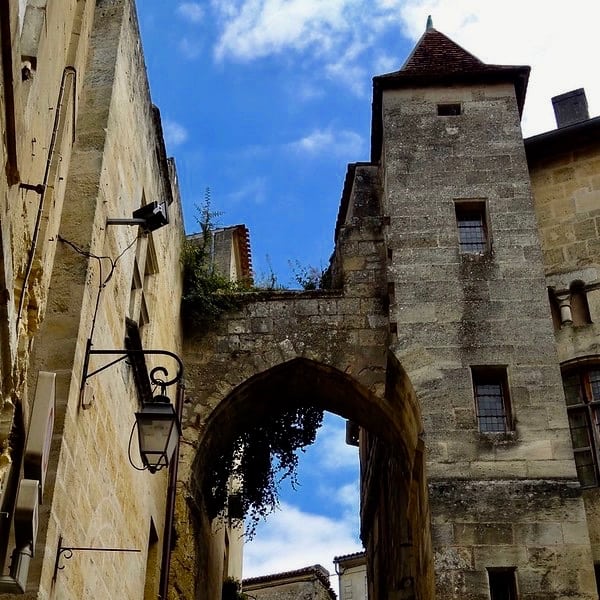 The formal name of the World Heritage site is Jurisdiction of Saint-Émilion.

Wondering about the ‘jurisdiction’ part? You’re not wondering? History is not your thing? Well, perhaps I can entice you with a character, or rather two, from the Robin Hood chronicles:

Eleanor of Aquitaine is one of the more interesting people of the High Middle Ages. She started out as the very wealthy and powerful Duchess of Aquitaine, the most sought-after bride in medieval Europe. She could pick and choose amongst all the important guys, and that’s exactly what she did. First, she married King Louis VII, and became Queen of France. Though, admittedly, she was only 14 at the time, so the picking and choosing might have been done by someone other than herself, especially considering she soon sought to have the marriage annulled.

Two months after that was sorted, she married the Duke of Normandy aka King Henry II of England, and became Queen of England. Eleanor and Henry had eight kids. You will have heard of two of them: Richard the Lionheart and John Lackland (bit of a cruel moniker, I think – but, being the youngest son, he wasn’t expected to inherit land). Robin Hood’s benefactor and nemesis, respectively. King Richard, as we remember, was into crusading, and when he died in 1199, in his mother’s arms, he was succeeded by his youngest brother, John, and Aquitaine was part of his inheritance. (Lackland, my a**, John must have thought.)

And via that somewhat circuitous route, we finally come to Saint-Émilion, where John established a Jurade (also in 1199, he wasted no time) – a brotherhood of Saint-Émilion wines. This brotherhood – a medieval regulator – verified the quality of the wines. The ones that were approved, were given an appellation and sent off to England.

In exchange for the wine, John delegated administration of Saint-Émilion to local magistrates. Eh voilà, we have a jurisdiction, one with social, political and economic autonomy, which lasted for 300 years. 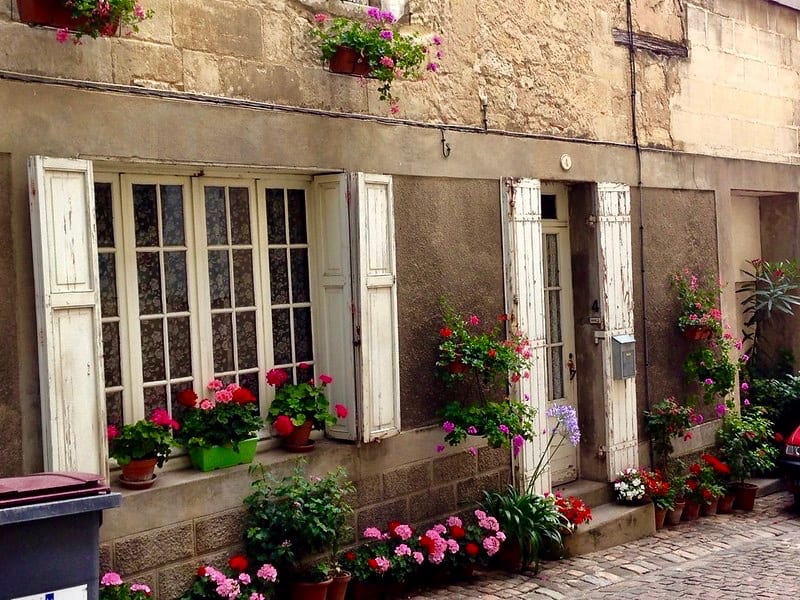 So, there you have it, folks:

PS – Switzerland isn‘t the only surprising wine-producing country. England is, too. I’m reminded I haven’t told you about my fave pink sparkling wine and the interesting family behind it. Right up there with Champagne, only on the Sussex Downs. Watch this space. And hold me accountable.