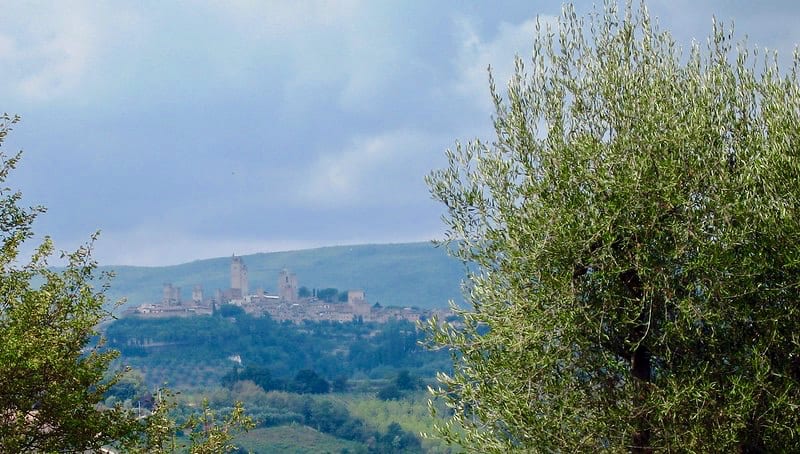 We arrived in Tuscany late one night, much too late to see anything. But early next morning, at the patio breakfast table of our cosy farmhouse inn, Cat, my youngest, pointed to some towers on a hill in the distance. This, we were told, was San Gimignano. The towers looked elusive and mysterious and we were keen to have a closer look.

This Tuscan hilltop town is famous for two things: 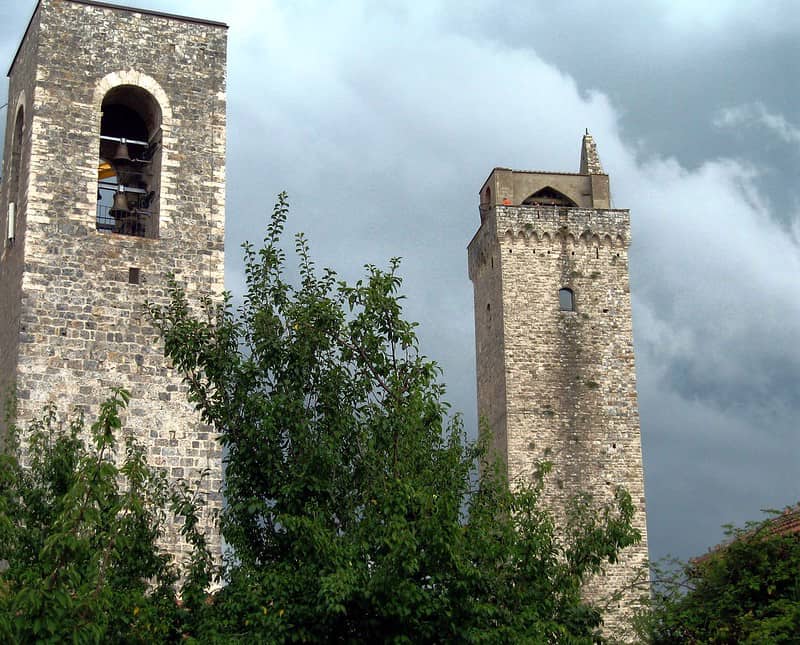 The tall towers of San Gimignano

Founded more than 2 000 years ago by the famous civilisation of the era (and area) known as the Etrusci or Tusci (origins of the name Tuscany), this was an independent and wealthy town for centuries. And what better way of potently showing off your wealth than by building tall towers?

Then came the Black Death. Like Norway, San Gimignano was hard hit and forced to surrender its independence and possessions to another power. For Norway, that other power was Denmark. For San Gimignano, it was Florence. 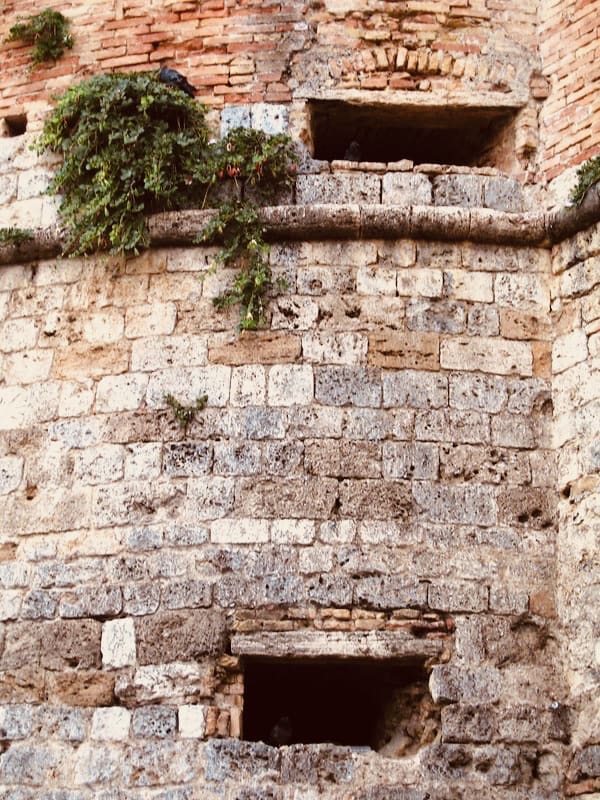 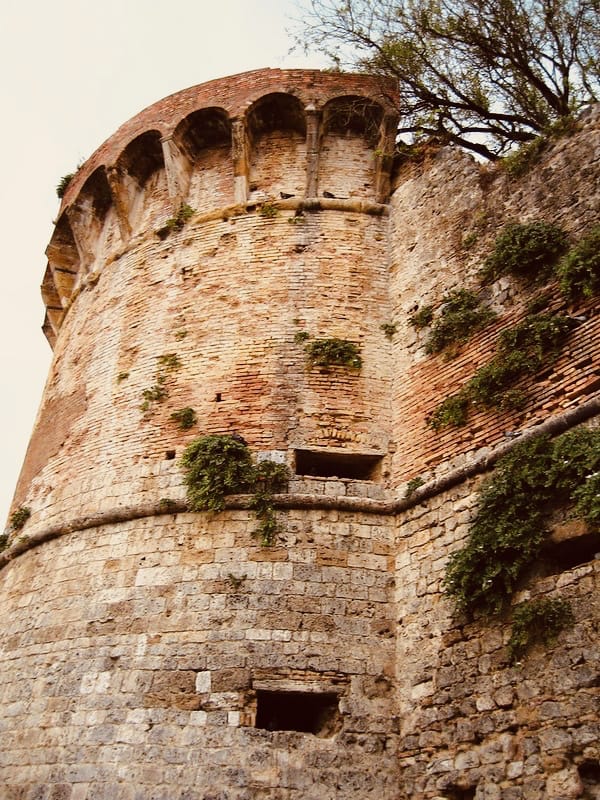 The town had 72 towers, 14 of them are still standing. Not bad, considering most other towns, such as Florence, have hardly any left. 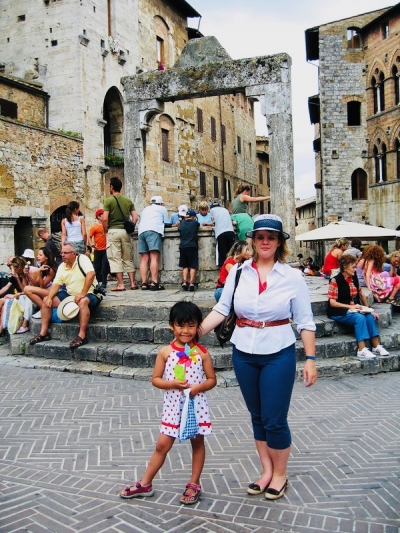 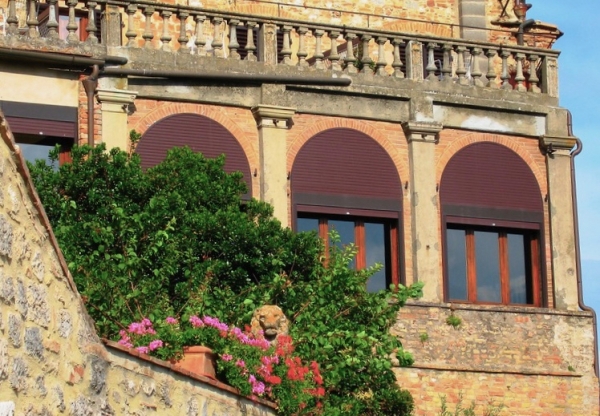 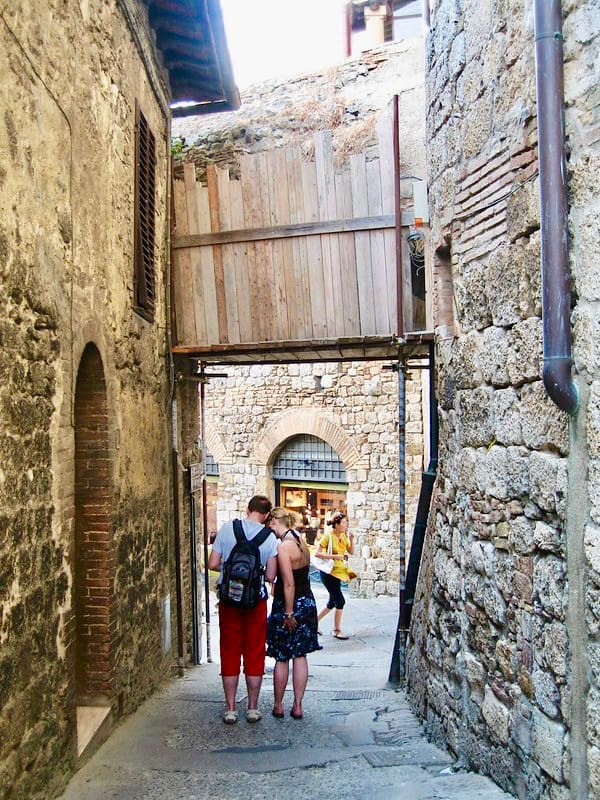 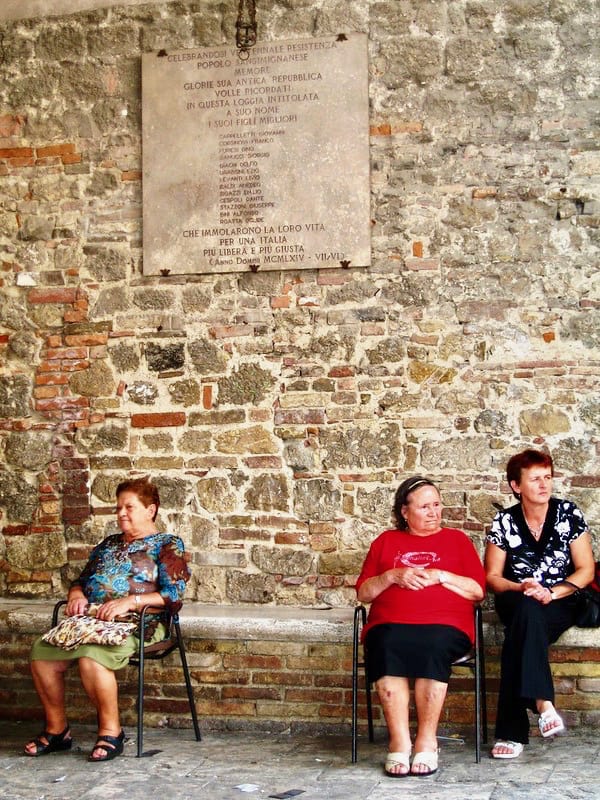 If you haven’t been here, but think it looks familiar, chances are you either like video games – Assassin’s Creed is all about exploring medieval San Gimignano, or you’ve seen the film Tea with Mussolini. Remember Dame Judi Dench and the other expat women, trying to save frescoes from destruction? The frescoes can be seen inside the Duomo below. 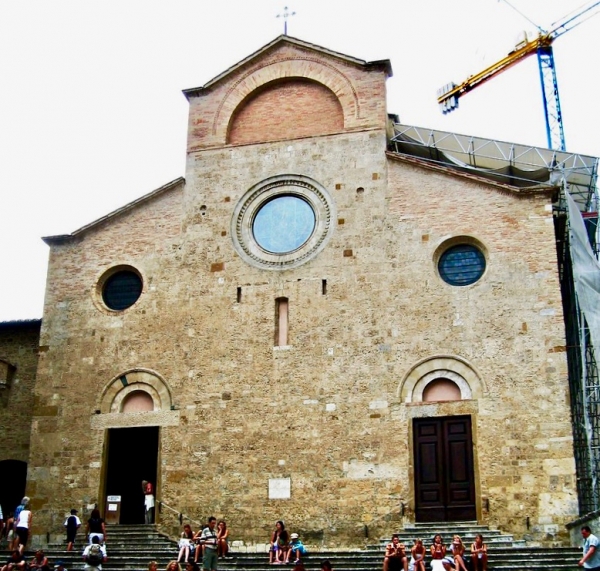 The town’s other claim to fame is the white wine made from the local Vernaccia grape. There’s really only one word to describe this wine: Heaven! 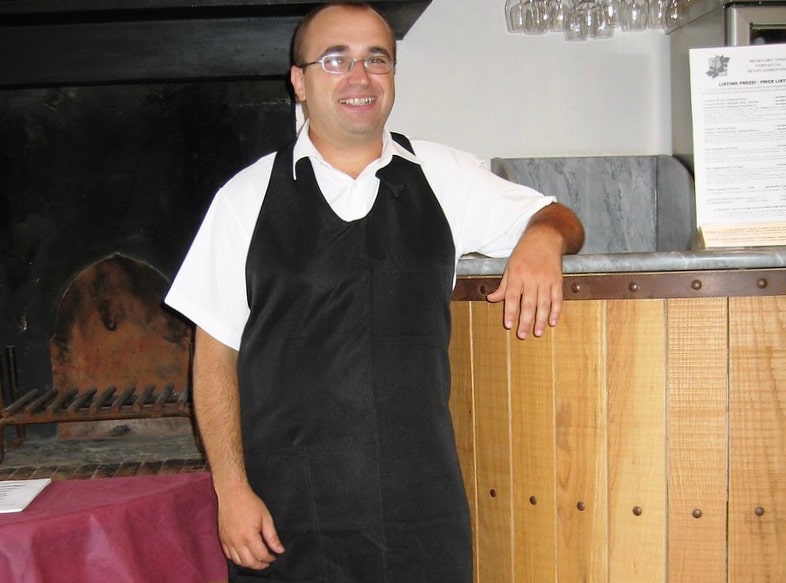 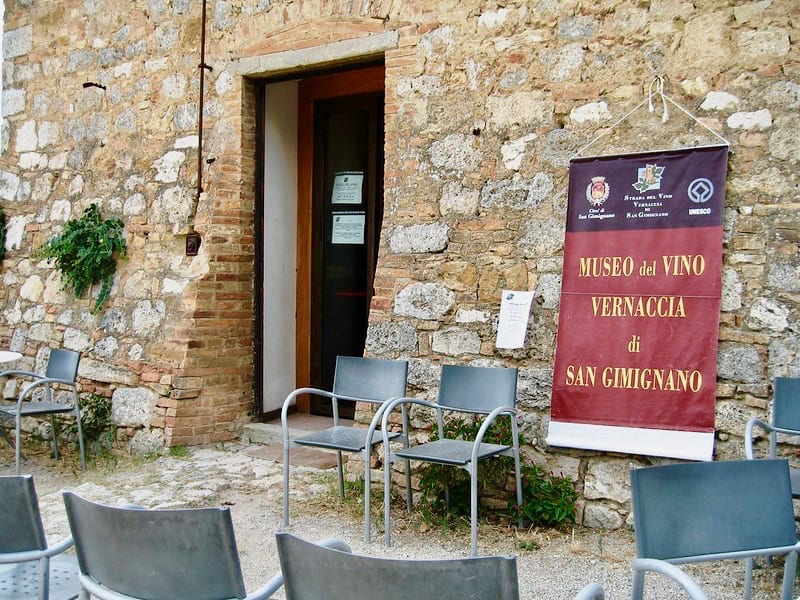 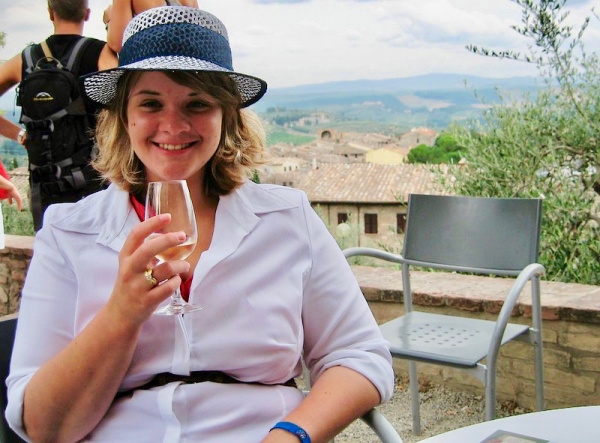 Big sister sampled the wine (mum did too, but only the tiniest little bit, since she was driving), while little sister found better things to do; climbing statues and catching up with friends at home… 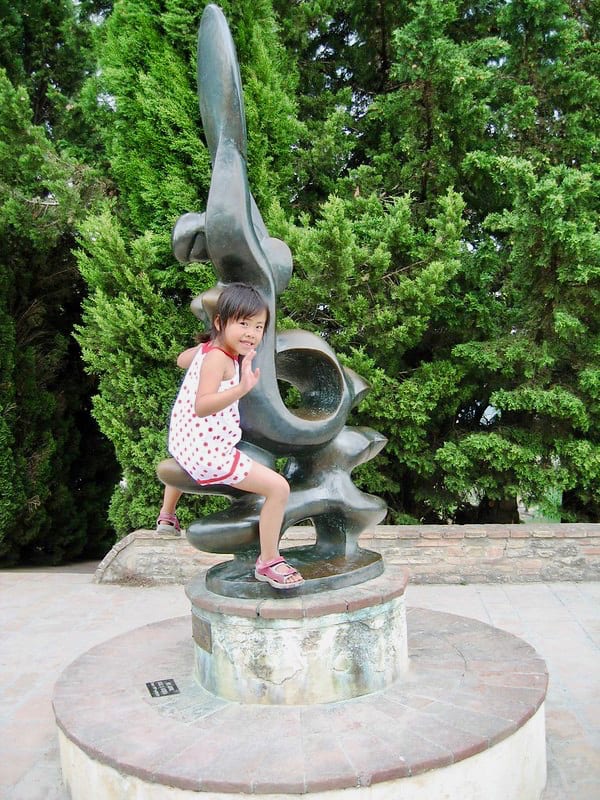 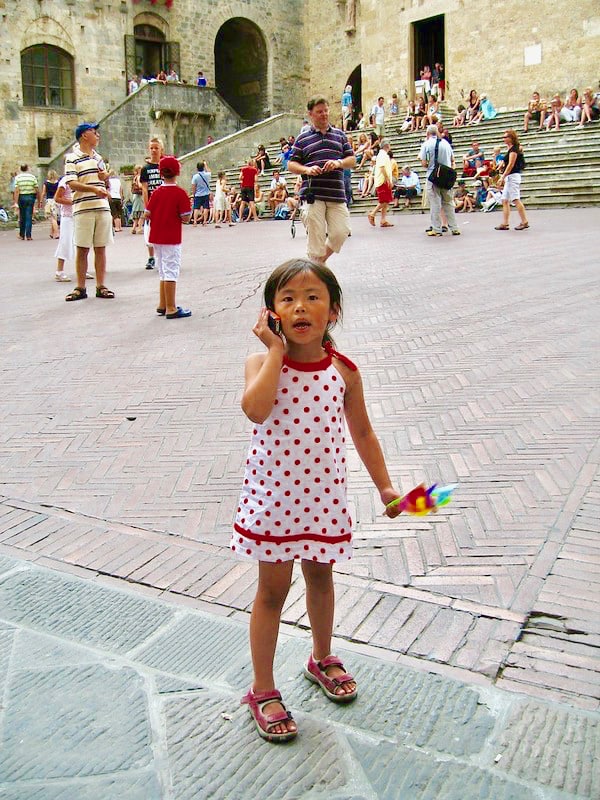 We had fun strolling around, browsing the shops, enjoying the views, having lunch and stopping frequently for runny but yummy gelato. But San Gimignano is popular on the tourist trail. This was August, and although it wasn’t too crowded, it was still difficult to get a feel for the place. And it was difficult to see the towers properly; we were simply too close. Looking out on the hills of Chianti, we decided San Gimignano was even better seen from our inn. The peace and quiet out there made it easier to let fantasy flow, to imagine the history and intrigue. 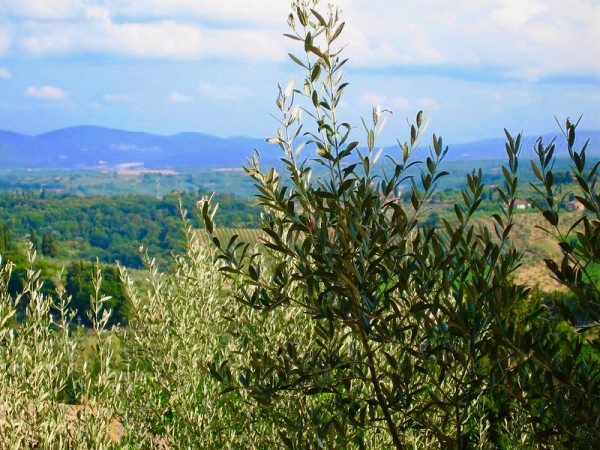 That evening, looking at the towers from our garden, the sense of mystery and magic that had eluded us in town returned. Sometimes, it’s good to pull back a little.

That said, it would be interesting to live in this old town flat for a bit, say in February. 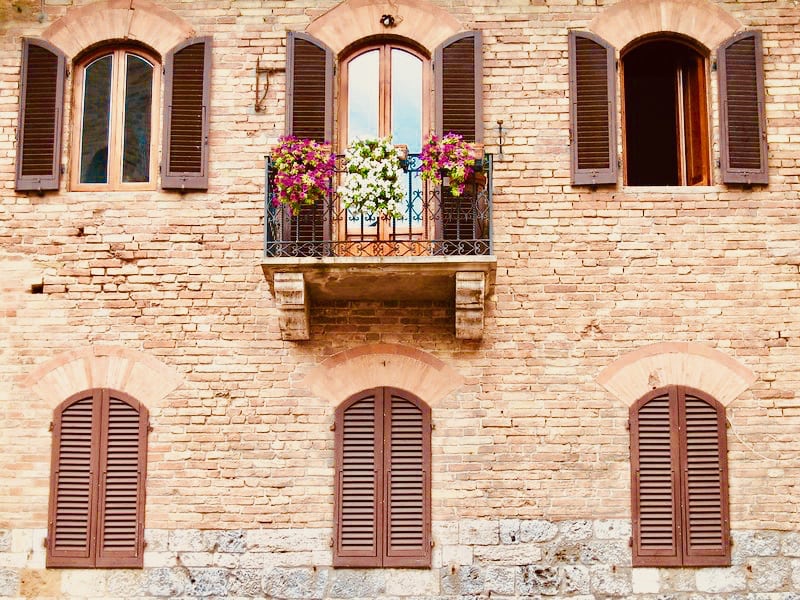 Do you adore Tuscany? Have you been in San Gimignano?